BACK TO ALL NEWS
Currently reading: New Mazda CX-4 revealed in Beijing
UP NEXT
New report questions government's 2030 ban

The new Mazda CX-4 has made its debut at the Beijing motor show.

The new mid-size SUV, which is based on last year’s Koeru concept car, has already been spotted undisguised during final testing. The CX-4 will sit between the current CX-3 and CX-5 (click here to see the 2017 CX-5) models when it goes on sale next year.

Mazda has confirmed there are currently no plans to bring the CX-4 to the UK; it remains a China-only model. Given the continuing popularity of SUVs and crossovers in Europe, and positive public reaction to the Koeru concept, however, the possibility of the CX-4 being a global model remains open. The CX-4 sports the same prominent front grille and headlight arrangement as its larger CX-5 sibling but also keeps the same swept-back proportions of the Koeru concept.

Its overall dimensions make the CX-4 marginally shorter, narrower and lower than a Mercedes-Benz GLC – a car which would be considered a key rival for the new Mazda in Europe alongside SUV staples like the Kia Sportage and Hyundai's Tucson. The CX-4 also gets up to 197mm of ground clearance.

In China, the CX-4 will be sold with two petrol engines - a 2.0-litre and larger 2.5-litre - both from Mazda’s Skyactiv range. The most efficient 2.0-litre choice returns a claimed 44.8mpg. Both engines can be mated to six-speed manual and automatic transmissions with the larger 2.5-litre engine also getting the option of all-wheel drive. The CX-4 gets a MacPherson strut suspension arrangement at the front and a multi-link setup at the rear. 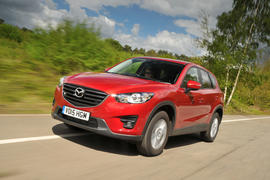 Mazda says the CX-4 has been designed to give the feeling of ‘Jinba-ittai’ on the road, which translates from Japanese as “horse and rider as one.” The car maker promises “excellent handling thanks to its low centre of gravity.”

Inside, the five-seat CX-4 receives the same basic architecture as the CX-5, including that car’s free-standing infotainment screen. The full suite of Mazda’s i-Activsense safety technologies should also be available. Nobuhide Inamoto, Mazda’s senior manager in China, said: “Demand for SUVs here is remarkably strong and we expect this model will play a big part in expanding the Mazda brand in this market. We will continue working to strengthen our brand in China, aiming to become a brand which enriches people’s lives through cars.”

Great shame about it not coming here. I rejected the CX3 because I thought it was too small and bought a Q3 instead. I think there'd be a ready market for the CX4. Is it not based on teh Mazda3?
Tornadorot 25 April 2016

Up till now, Mazda have avoided using a '4' in their model designations due to superstitious tetraphobia in China and thereabouts. I wonder what changed?
scotty5 25 April 2016

by all accounts it drives well and looks good but is that enough for the CX-3? It has limited rear space and has a small boot - you can't even load a child's buggy without dismantelling it first. The whole point of a SUV is practicality, perhaps that's why for all it's good looks, the CX-3 is a rare sight on our roads. Ditch the CX-3, replace it with this CX-4 and I reckon it'd be Mazda's best selling model - by some margin.
View all comments (5)