BACK TO ALL NEWS
Currently reading: UK car sales continue to break records in face of Brexit
UP NEXT
Audi A6 E-tron Concept previews 2023 electric saloon

Last September was the highest on record, with the Ford Fiesta ranking top; however, experts say the effects of the EU referendum are just beginning to show
Share
Open gallery
Close
Share story

The UK car market has remained strong despite concerns Brexit could cause a downturn, recording the best September on record last month.

SMMT (Society of Motor Manufacturers and Traders) figures show that September contributed 469,696 cars bringing the year to date total up to 2,150,495 and representing a 1.6% increase on the month before.

Diesel models saw an increase in demand and beat September 2015’s sales by 2.8% with 218,364 units, while alternatively fuelled vehicles continued with strong growth to beat last year’s September demand by 32.6% after 16,060 cars were sold.

Conversely, petrol car sales were down 1.1% on September 2015, but still accounted for the majority of overall sales, with 235,272 units sold. 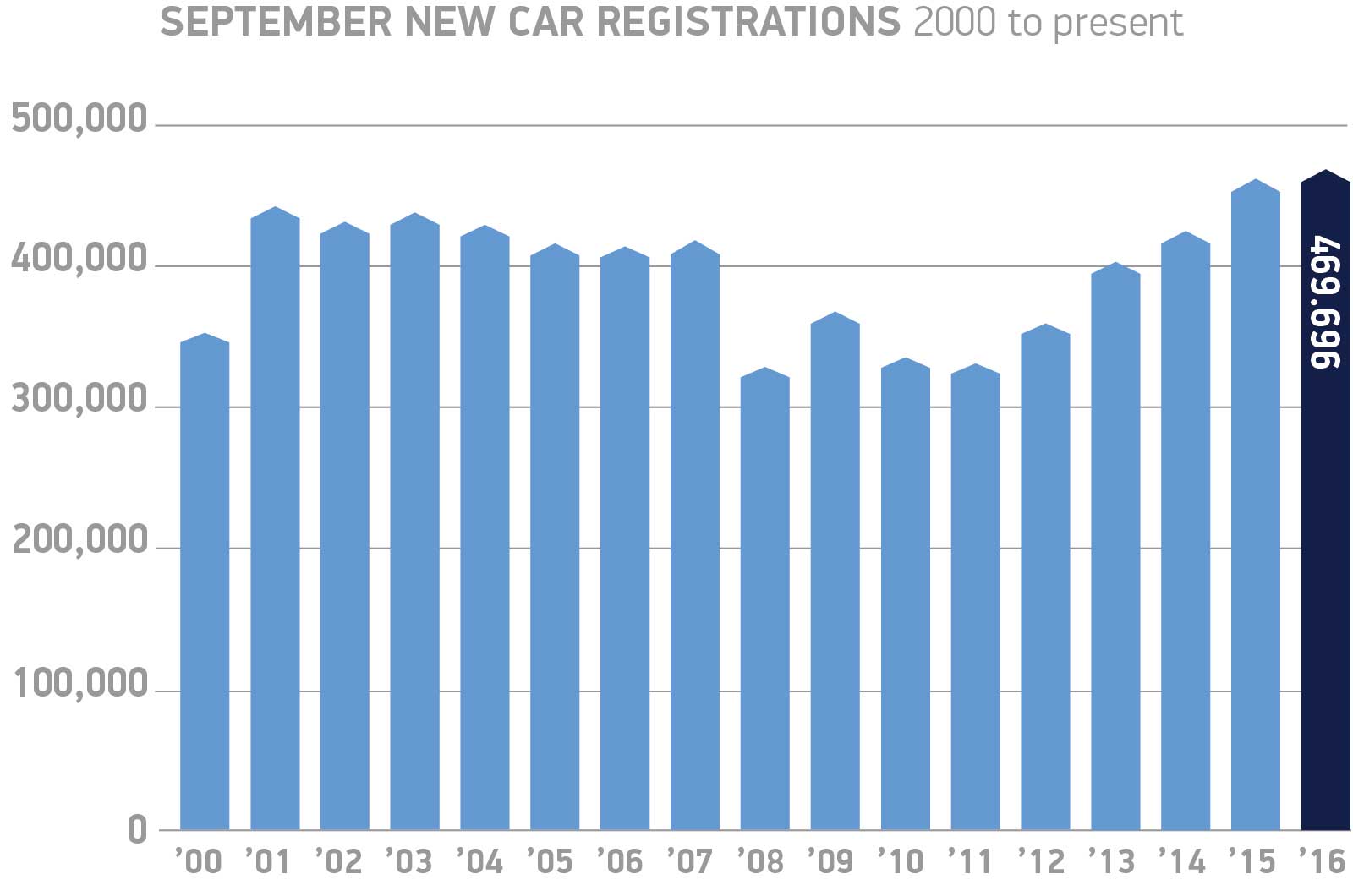 The Ford Fiesta continues to be Britain’s favourite model, selling in 19,769 units compared to 14,570 for the second placed Vauxhall Corsa. The Volkswagen Golf sold in 11,003 units last month ranking it third, beating the Ford Focus by a slim 11 cars.

“The new plate, combined with a diverse range of exciting new models featuring the latest technology, has certainly helped draw buyers into showrooms and many are taking full advantage of the attractive deals and low interest financing options on offer,” he said.

“Business and consumers place September orders many months in advance, so the ability of the market to maintain this record level of demand will depend on the ability of government to overcome political uncertainty and safeguard the conditions that underpin consumer appetite.” 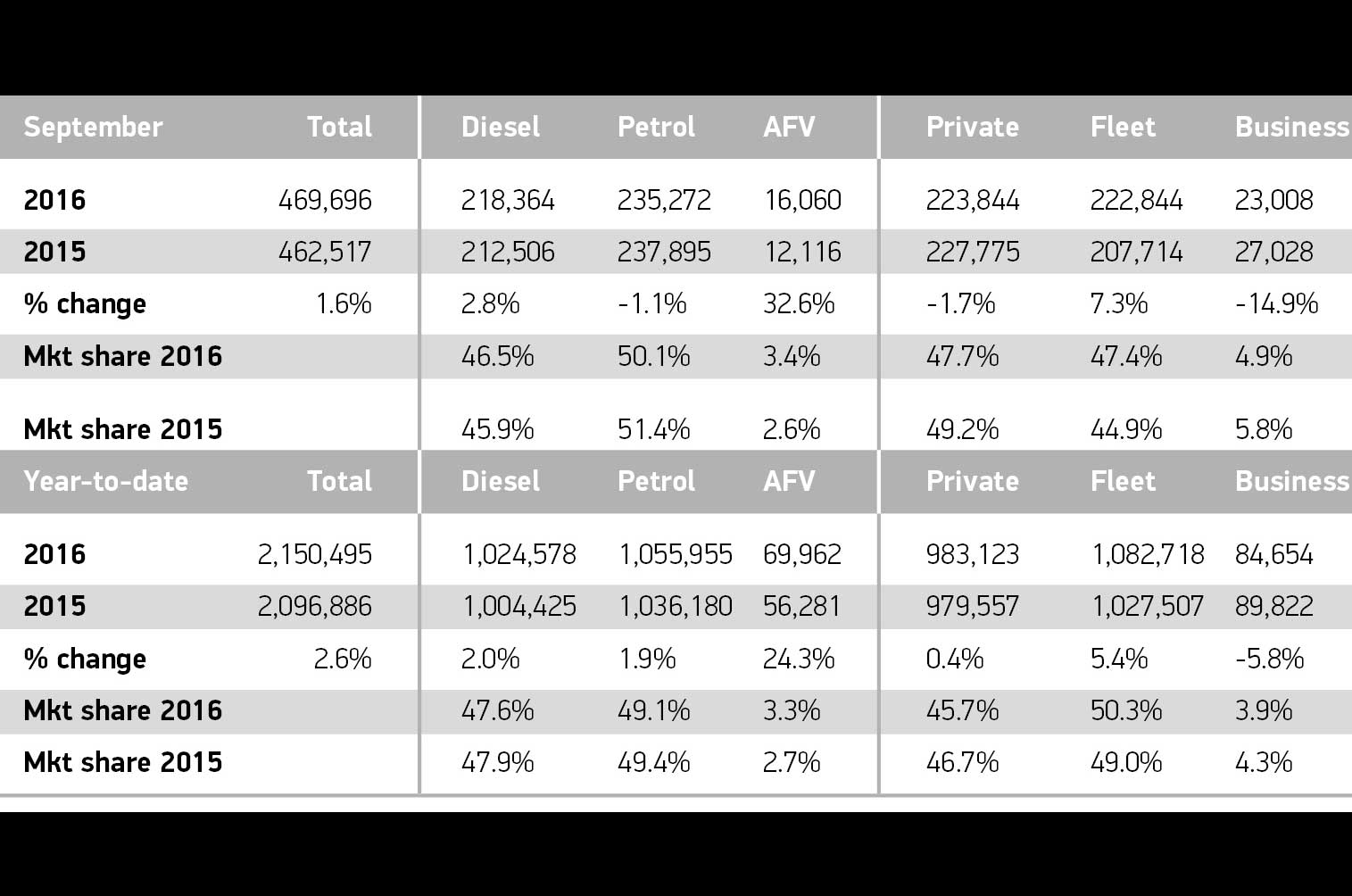 Chris Bosworth, director of strategy at Close Brothers Motor Finance, isn't so confident in September's figures. He said “As we have seen for the last six months, private sales have continued to fall causing the growth trajectory of new car registrations to steadily drop. Many consumers are now starting to gravitate to well-priced ‘nearly-new’ stock as manufacturers reduce the number of subsidised finance offers available. With the business market likely to be impacted by the outcome of the current HMRC review into company cars, the private sales market will become increasingly important to overall registrations in the UK.

Bosworth made reference to recent announcements from UK-based car makers, including Nissan and Vauxhall, that threatened reduced investment or rising prices due to Britain's impending exit from the European Union. “[This means] the make-up of the UK car industry in the long term is far from certain, he said.

"Looking forward, new innovations – such as safety improvements, alternative fuels and models – released by manufacturers will be the main drivers in encouraging people to continue to purchase new cars over used vehicles in the coming months," he added.

Actually with the devaluation of the Pound to the Euro (now over 10% cheaper), everything is in the interest of UK manufacturers.
European made cars will not only be 10% more expensive because of the exchange rate but will also have another 10% tariff slapped on them.
Whereas UK manufactured vehicles with a 10% import tariff will be eliminated by the fall of the value of the Pound.
optima 5 October 2016

Only 3 out of the top 10 vehicles sold are made in the UK, the other 7 all come from European factories so that surely gives us greater power when it comes to access to the single market as putting a 10% charge on UK vehicles being sold to Europe will also mean that we would put a 10% tariff on all the vehicles sourced from Europe.
getmyauto 5 October 2016

This is great news for UK because here in US, September was lower, the drop was mainly on larger trucks and SUVS.
View all comments (8)