BACK TO ALL NEWS
Currently reading: SpaceX Falcon Heavy rocket en route to Mars with Tesla Roadster
UP NEXT
Motoring heroes: the most inspiring people in the car industry

Elon Musk has sent his Tesla Roadster into space in the nose of his new SpaceX Falcon Heavy rocket.

The car, Musk’s own example of his car company's first model, is mounted in the tip of the new rocket and is being thrust into an orbit around the Sun.

During the launch this evening, the car was captured on camera playing David Bowie’s Space Oddity through its sound system. It features a copy of The Hitchhiker’s Guide to the Galaxy and a towel with ‘Don’t Panic’ (from the story) on it in the glovebox. A dummy wearing a SpaceX suit is sat in the driver’s seat (see gallery).

The Roadster has first entered a Low Earth Orbit attached to the rocket, but after passing through the Van Allen radiation belt (a potentially dangerous region held in place by our planet’s magnetic field) it will head towards Mars. The car will then be released from the rocket and pass close to the red planet on its own. 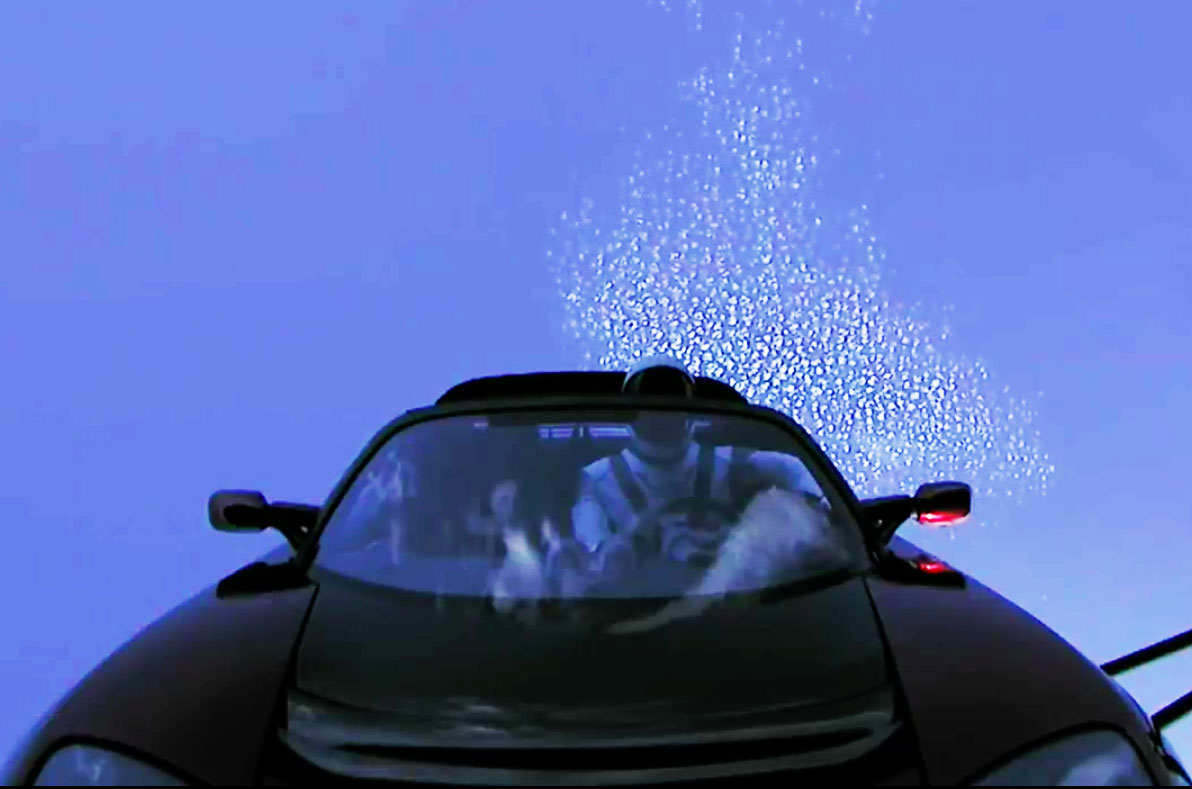 SpaceX mounted cameras to the Roadster to capture the journey as it unfolds. The Roadster is the first consumer car to be sent into space and the fourth car overall, following the Moon buggies of the Apollo missions.

SpaceX, which Musk also owns, is using the car to demonstrate the Falcon Heavy’s ability to carry large payloads into space. The rocket is claimed to be capable of holding up to 63.8 tonnes of cargo – the equivalent of 49 Roadsters – for a journey into Low Earth Orbit. It can carry 16.8 tonnes to Mars.

The Falcon Heavy is powered by 27 Merlin engines spread across three main structures. All three are planned to return and land on Earth - the first two are already down - once the mission is complete. This would be the first time all three segments have been recovered.

Musk’s plan is providing both of his brands with extensive global coverage. The Mk1 Roadster’s successor was revealed late last year with bold claims that it can race from 0-62mph in 1.9sec and has a 620-mile range, thanks to a 200kWh battery pack.

Like the Roadster, the Falcon Heavy comes with claims of class-leading specifications. Its maximum payload is more than 2.5 times what NASA’s now-retired Shuttle could carry and it is claimed to be capable of taking 3.5-tonnes of cargo to Pluto.

Will the Model 3 make or break Tesla?

He's doing all the things I'd love to do and can only dream about. The difference between us is he's got the brains, motivation (I could go on) to actually 'Just do it'!

All an advertising stunt?

Suggest you read the full story.

"The car will be released

"The car will be released from the rocket" cant see anything about the car returning, so it does seem a pretty wasteful publicity stunt to me. auctioning the car and giving the money to charity would have been less wasteful.

This is all about testing a new rocket, to be tested properly it needs a payload. No one will trust an untested rocket with a $5 million dollar satellite so you may as well get something out of it.

Anything on top of that like publicity is a bonus.

typos1 should have been at the wheel

Has the Tesla been modified in any way?

Air taken out of the tyres for instance?

It's not advertising, it's PR. He leads both companies so why not, as it's an incredibly clever way of getting people to talk about Tesla.

Even if I find Tesla cars

6 February 2018
Even if I find Tesla cars irrelevant, overpriced and not exciting at all, I truly wish all the best to the team behind Space X today, what Musk and their team are doing with that Program is indeed something that truly matters. Instead of being obsessed with CO2 emissions most should be helping with similar projects, the future of our race lies far from our Planet and space exploration is the next step. Good luck, that is one thing he can truly be a pioneer at.

Not the largest rocket ever

Saturn V had LEO capability of 130 tons. It's worth noting that Saturn V burned LOX and LH2. Which is I think more environmentally friendly in comparison with the kind of fuel Mr. Musk has burning in his Merlin engines. Granted Merlin's have better power per volume of fuel burned -- however each launch will launch lot's of green house gases into the upper most levels of the athmosphere, as Mr. Musk's rockets are really big and carry a really lot of fuel to burn this is actually issue worth thinking about. Burning LOX and LH2 would mean, the rocket would have to be larger still and more expensive -- hence less economic in operation. But price that against the environmental costs of launching each time all of those green house gases each time.

Why don't they attach solar

Why don't they attach solar panels to the roadster, then they can drive it to the Clangers and say hi from all of us to the soup dragon.

Why don't they attach solar

Why don't they attach solar panels to the roadster, then they can drive it to the Clangers and say hi from all of us to the soup dragon.