BACK TO ALL NEWS
Currently reading: PSA Group opens flagship Citroen, DS and Peugeot site in London
UP NEXT
Hyundai i20 N targets Fiesta ST with 201bhp

These include the recently launched Peugeot e-208 supermini and the more upmarket DS 3 Crossback E-Tense crossover. The site will also sell all of the marques' current models, as well as offering used cars and aftermarket services.

“This site is a clear indication of our commitment to customer service and choice as we continue to grow our UK sales, especially our growing line-up of electric vehicles,” said PSA UK managing director Alison Jones.

Citroën UK boss Eurig Druce added: "The business on this site has been hugely successful for years, but by upgrading it to be a flagship venue, we're laying down a statement in our confidence for the future. It's an amazing venue in a highly visible location on what must be one of the country's busiest roundabouts."

James Weston, who runs Robins & Day, added: "The venue has been built around the customer, from ensuring they can arrive and park easily to getting them where they want to go as efficiently as possible. Because the three brands have such strong identities, we have been able to house them under the same roof while still ensuring that they each have their own presence."

The reworked site features dedicated showrooms for Citroën, DS and Peugeot, a 12-bay workshop and two MOT bays. There are also several EV charging points, as well as an off-site parts hub and a commercial centre.

The site aims to achieve 11,300 vehicle sales in the first year of operation. 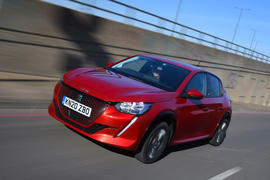 Sorry but even Megan M could not spend 14.5 million on renovating a garage showroom

Sorry but even Megan M could not spend 14.5 million on renovating a garage showroom

Sounds reasonable, although as per other post, Vauxhall should've been included.  The whole dealership sales model needs a complete rethink but Vauxhalls in particular is pretty desperate.

To complete the PSA brand portfolio they should have added Vauxhall to this site. I mean after all it's one of PSA's core brands ? (where's the embedded link???)

Because the three brands have such strong identities

ĎS has no identity, apart from being a sad overpaid marketing mans plaything.

How many are aspiring to own a DS?

Keep it simple, the answer is Zero.