While sibling brands Peugeot and Vauxhall are taking aim at slightly smaller and cheaper electric superminis with their first battery-powered models, DS Automobiles has bet on the compact crossover hatchback with its EV debutant. And since it might also be considered a ‘style’ or ‘design’ car, the new DS 3 Crossback E-Tense makes a surprisingly close rival for the cars it will inevitably be compared with – the Kia Soul EV and Hyundai Kona Electric.

Success will be a taller order in this niche, though (excuse the awful pun). Both Kia and Hyundai are available with bigger drive batteries and better electric range, and for similar money to that of our upper-trim-level DS test car. Both the Koreans are faster accelerating and more powerful than the DS (assuming you discount the cheaper, smaller-batteried version of the Hyundai). And both offer better cabin practicality. There is also a pseudo in-house rival for this car in the shape of the Peugeot e-2008, which has the same electric powertrain and battery but is notably cheaper and, according to our early testing at least, is also more practical.

All of which doesn’t sound like the most auspicious preliminary appraisal, does it? DS Automobiles will claim that the practical qualities we’ve already mentioned won’t be so important to its clientele, who place at least equal stall on a luxurious ambience and a stylish design. And it’s not as if this E-Tense is letting the electric side down with its 134bhp electric motor, near-200-mile claimed range or sub-9.0sec 0-62mph acceleration claim – although it certainly doesn’t seem to be breaking much ground, either. 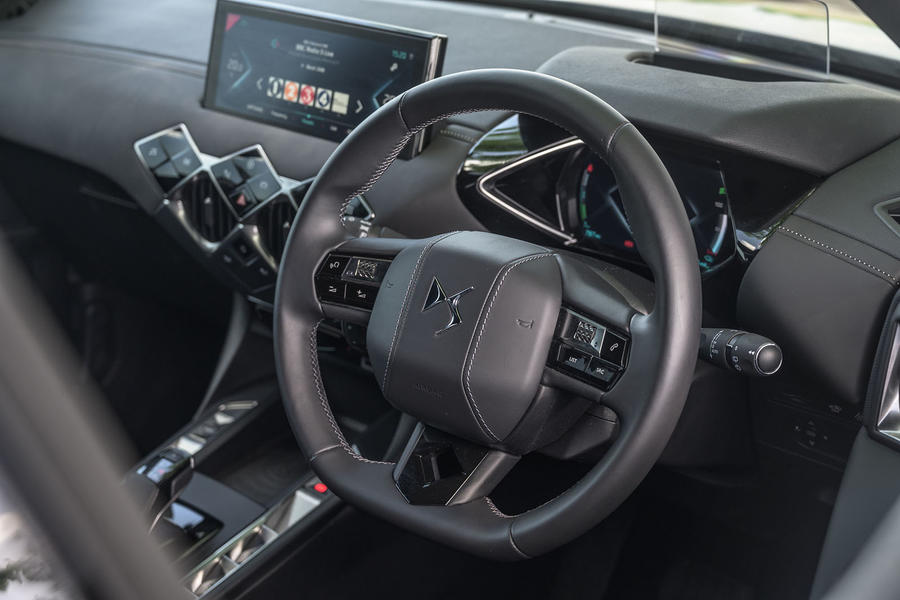 The DS 3 Crossback’s curiously cramped back seats are likely to disappoint if you have growing children or young adults to transport. I’ve heard it said that people who choose small crossovers over hatchbacks don’t generally use the back seats much. Boot space is much more important, apparently – and the 3 Crossback does okay on that score, with a 350-litre boot that has a variable-height floor. Even so, when you can have a significantly more spacious four-seater in the same class, and for much the same money, it’s hardly a selling point.

The DS's cabin does have a quite a materially lavish ambience. The mottled ‘art black basalt’ hide of our Ultra Prestige test car looked nice enough, albeit a little bit like regular leather that needed a going over with a wet wipe. As with so much about this car, it's different; and if you like it, you like it.

The car isn’t short of in-car technology, either, assuming you can get on with its layout and usability. I must admit I struggled. The 3 Crossback comes with a bank of rather chichi, stylised switches on the centre console for its electric windows, parking brake, child locks and drive modes. Trouble is, they all look very similar and aren’t labelled that clearly, so you don’t always find the one you’re after at the first attempt. The infotainment console looks equally contrived and over-stylised, and even the digital instruments see few opportunities wasted for design flourish to take precedence over clarity and readability.

The car is, at least, pretty simple to drive, and broadly pleasing with it. Performance feels authoritative, and although it isn’t quite in the league of some affordable EVs, it remains strong enough to give the car a useful turn of pace on the motorway and when overtaking on A-roads.

There are several drive modes to choose from (Sport makes for the best accelerator pedal response), but only two trailing-throttle energy regeneration regimes – ‘D’ and ‘B’. Other EVs allow you to cycle regen modes more widely and cleverly; and if the DS did allow you more freedom on that score, it might make the power in its 50kWh battery go a little further. As it is, electric range is respectable although not outstanding. Even at motorway speeds, you’ll rarely get less than 150 miles on a charge; and if you stay around town and keep your speeds down when outside of urban areas, 180 to 190 looks possible.

The 3 Crossback’s particular chassis tuning was clearly an attempt to deliver supple ride comfort with minimal compromise to body control and handling precision. On UK roads, it’s not the greatest success. While evidently stiff anti-roll bars keep the car from rolling hard when cornering and maintain reasonable handling accuracy, that high lateral stiffness makes for poor close body control over even slightly uneven roads, as permitted by that slightly long-travel, gently damped suspension. The ride also has a tendency to thump over mid-corner bumps and is quite noisy over coarse surfaces. 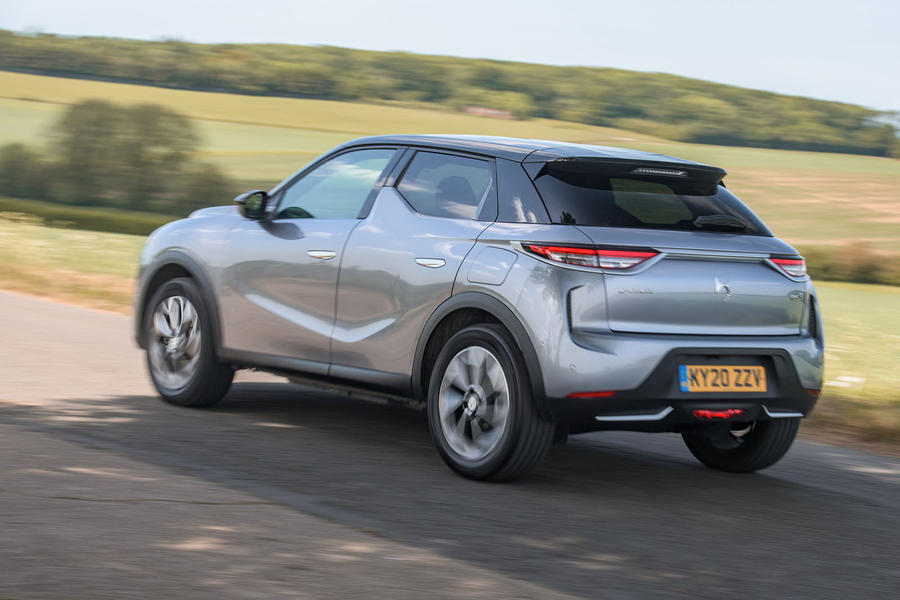 The DS 3 Crossback E-Tense isn’t actually the most practical small EV, and nor is the car that smarter buyers will naturally gravitate towards. While prices for the car do start £5000 lower than that of our test car, the DS was never likely to appeal on value grounds given the way its maker positions itself; and even at £31,000 after your gift from HM Treasury, it doesn't.

On that basis, this is a car that has been somewhat painted into a corner; but that doesn’t mean it’s entirely without appeal. Although it could function better as a small luxury car, it drives reasonably well and has the practicality and usability to satisfy plenty of less demanding supermini and wider premium hatchback converts.

There are more genuinely innovative cars in the growing EV market and, in my book at least, there are also more striking and alternative-looking ones. As we’ve covered, there are also simply better cars to choose from. But if you simply like the cut of the 3 Crossback E-Tense's jib, and aren’t too worried about dealing with the particular restrictions of electric car ownership, you needn't check the urge to splurge here. The EV market is a growing one, and there's plenty of room for a bit of richness and variety within it yet. 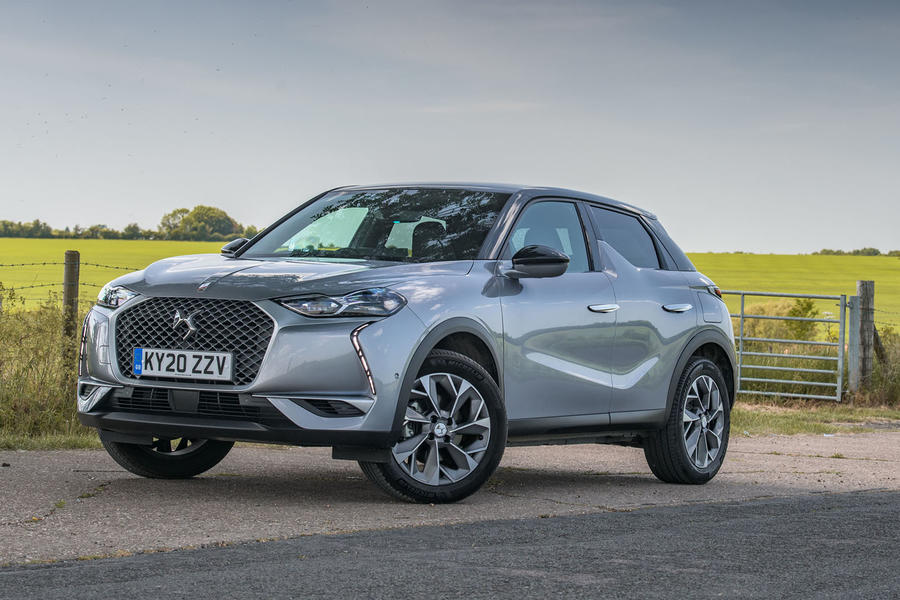 The spirit of the Suzuki X90 reincarnated.

You would have to be quite

You would have to be quite mad to buy new of these at full price instead of a basic Model 3 but I hope a few people do since I quite like it and fancy picking one up in a couple of years once depreciation has worked it's magic.

Close to £40k for what under

Close to £40k for what under the skin is very much like a Corsa. Only for Company car drivers in the UK, who get a free ride from our very generous tax system