BACK TO ALL NEWS
Currently reading: Past Masters: Mercedes-Benz 190 review
UP NEXT
MST Mk1: Is this the ultimate rally recreation?

Take just one look at the styling of a Mercedes-Benz 190 and you’ll know in an instant what it’s like to drive and own.

That three-box profile speaks of the solidity, comfort and robustness it delivers – and that’s exactly what makes the first baby Mercedes such a cracking modern classic today.

The 190 was released in 1982, in 90bhp carburettor and fuel-injected, 122bhp 190 E forms. The latter remained at the core of the 190 range for most of its life. It was joined by a 2.6-litre straight six, a series of diesels and a succession of ever more potent 16-valve models, which culminated in the truly special 2.5-16 Evolution II. Production stopped in 1993 – an impressively long run with barely any major tweaks – when the 190 was replaced by the W202, the first C-Class. 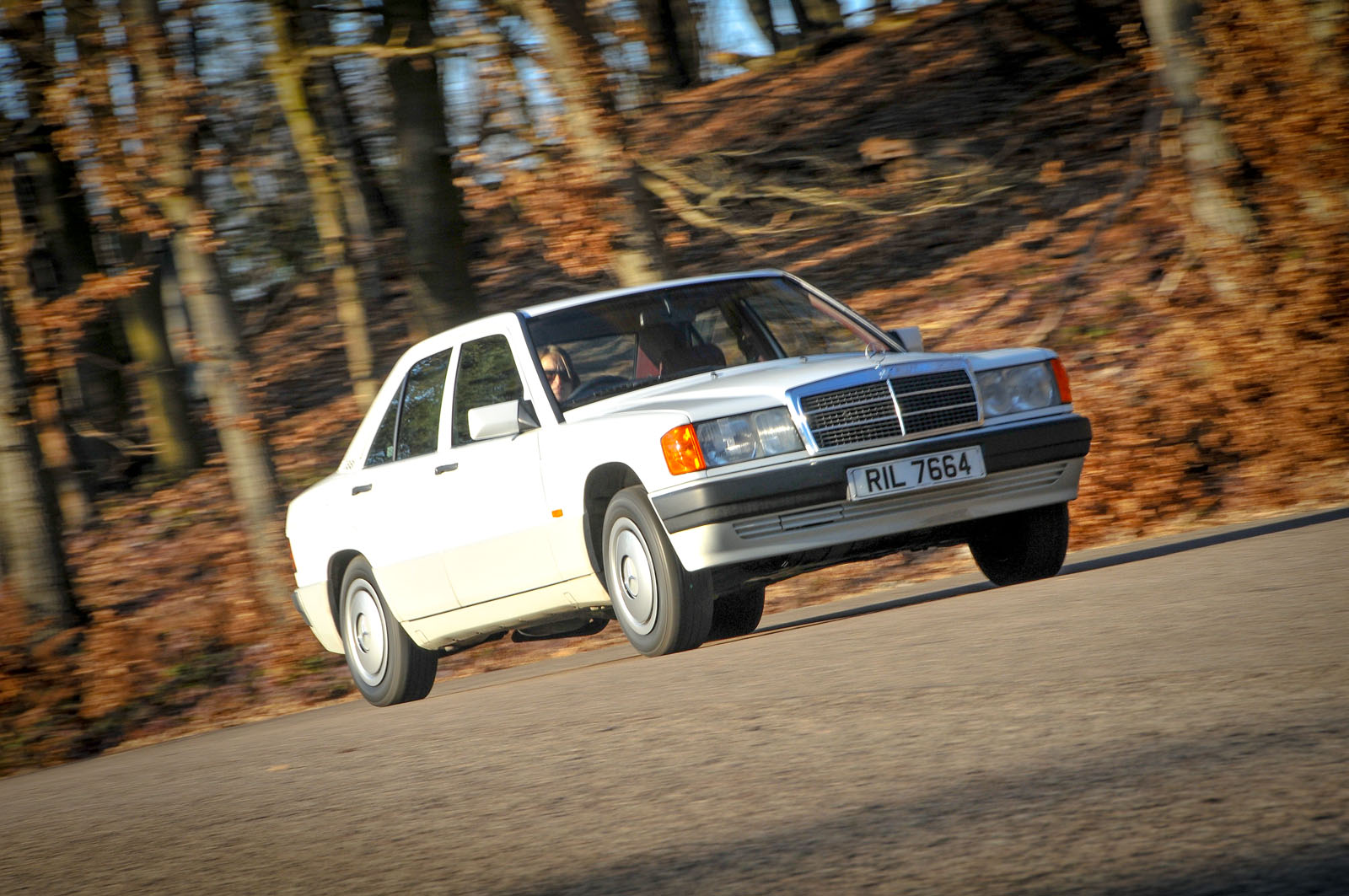 Cooking 190s like this one have long sat at the bottom of the Mercedes tree in terms of used values, and only now that the W202 is into banger territory are they being undercut. But a good 190 like this one can still be bought for very reasonable money.

The example tested here has a manual gearbox. Merc manuals have never been great, and this one is no exception. The rubbery change, vague action and long throw mean you’ll quickly decide that an auto ’box is pretty much a must-have.

It’d suit the character of the car far better, too. If you’re rowing through the gears, chances are you’re driving a 190 the wrong way. Corners are not to be blasted through at maximum attack speed; that approach will provoke a dose of tail squat and body roll, sending the inside front corner into the air. 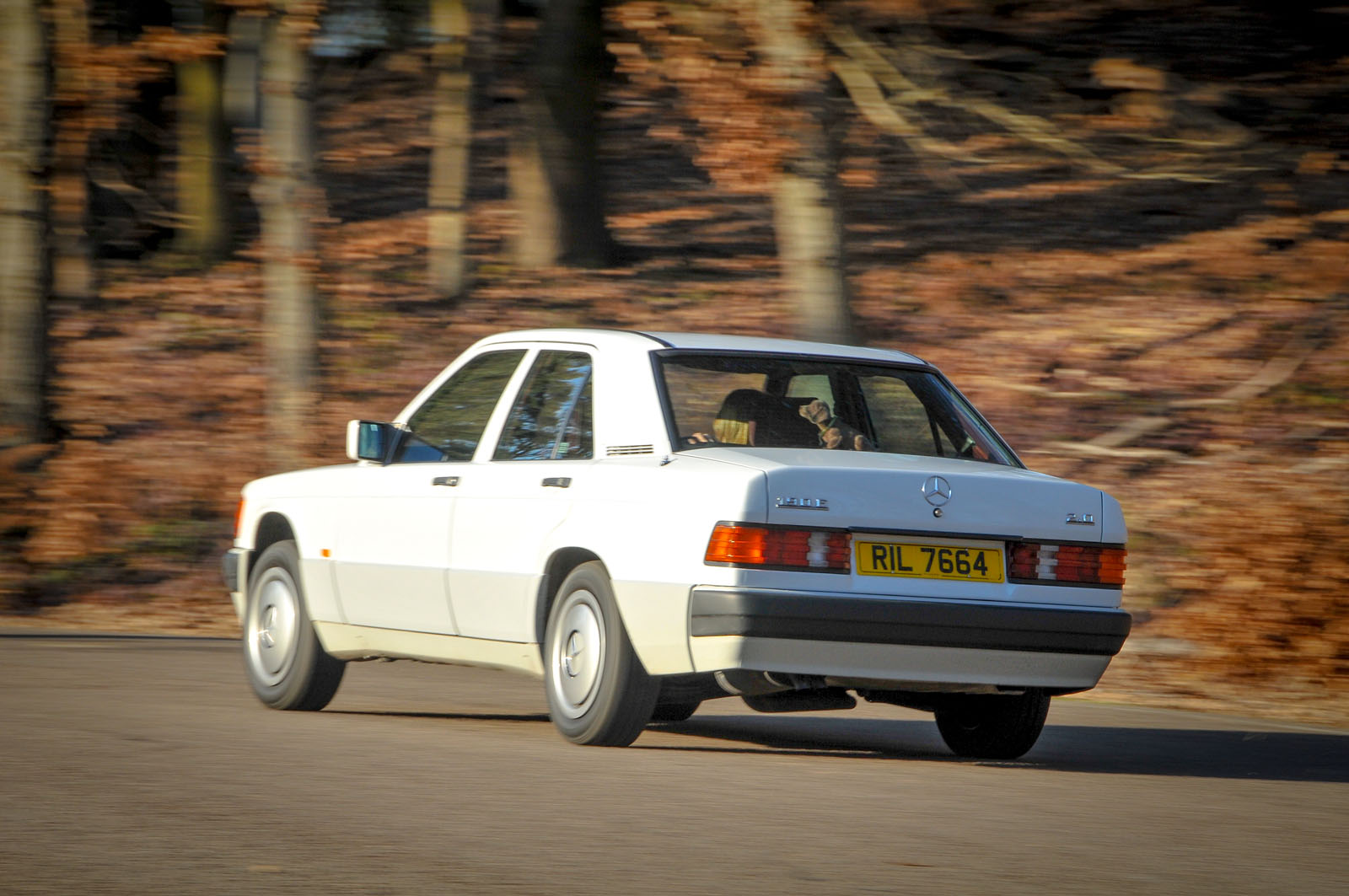 Mind you, even then there’s a sense of the hilariously over-engineered nature of the car, because the roll is progressive, the chassis is balanced and the responses are predictable. In other words, a 190 might not like being driven in this way, but at least it will deal with it safely and securely.

It is much more enjoyable to relax and bimble along in a 190. In common with most Mercs of its era, it is first and foremost a smoochy old cruiser. It’s quiet and unassuming while pottering around town, and out on the motorway it lopes disdainfully over expansion joints and remains wonderfully stable yet eternally comfortable. Although it never gets anywhere near being fast, the crisp throttle response and the 1997cc engine’s solid wodge of torque are endlessly satisfying.

This one has done more than 200,000 miles yet still feels as tight as a button. That’s partly because it’s owned by Mercedes and, as such, has been frequently and carefully fettled. But even without such attention, 190s are renowned for being robust, long-lived and mechanically simple, making them ideal classics for those buying on a budget.

So what if it isn’t the sharpest tool in the box? Sportiness isn’t everything. Instead, the 190 is a calm, collected stalwart that is maturing into a durable modern classic you can still get out and about in as much as you fancy.

Although current Mercedes appear to be back to the pre-1990s standard of material quality & engineering robustness, the current cars still lack the finesse of detail finish & the simplicity of function of eg. W201 / W124 / W126 where all the essential features were provided without anything superfluous. A contemporary Mercedes is as likely to be gadget-laden as any other marque.
WallMeerkat 6 March 2017

abkq wrote:
Although current Mercedes appear to be back to the pre-1990s standard of material quality & engineering robustness, the current cars still lack the finesse of detail finish & the simplicity of function of eg. W201 / W124 / W126 where all the essential features were provided without anything superfluous. A contemporary Mercedes is as likely to be gadget-laden as any other marque.

Small Mercs also lack something of the elegance that the likes of the 190 had - especially with the gaudy "I'm a coupe!" big badge grille that all the small models now have.