BACK TO ALL NEWS
Currently reading: Mercedes-Benz electric commercial vehicle roll-out gathers pace
UP NEXT
Omissions scandal: the cars we think should exist

Amid a global downturn in MPV sales, Mercedes' van division is confident of its survival and the transition to electrification
Share
Close
Share story

Speaking at the launch of the new EQV premium electric MPV, the ex-Mercedes-Benz GB CEO said: “We are in the fortunate position of being able to build on a strong foundation”.

The new EQV shares most of its bodywork and interior components with the conventionally-fuelled V-Class, while the e-Sprinter, launching later this year, will share a platform with the commercially focussed e-Vito electric van.

“We must invest heavily in our current product portfolio”, Breitschwerd said, He added: “2019 has been the year of the V-Class, and the e-Sprinter is to follow soon”.

“Sales of family vans are under pressure from the boom in SUV segment”, Breitschwerd said, but added that Mercedes is satisfied with the sales of its range of MPVs and commercial vehicles.

Since the launch of the Sprinter in 1995, Mercedes has sold 3.7 million units in 130 countries, with a 16% spike in demand in the first half of 2019 compared with the same period last year.

Breitschwerd also affirmed a commitment to other vehicles in the Mercedes-Benz Vans line-up. “We have heard a lot of speculation about the X-Class,” he said, referring to recent rumours that slow sales could prompt the pick up’s withdrawal, “and all I can say is that it remains an integral part of our product portfolio”.

One problem facing the commercial segment currently, according to Breitschwerd, is the “exceedingly high” proportion of diesel vehicles being used by delivery firms, taxi companies and other public services.

Alongside the launch of the new EQV and e-Sprinter, a partnership with BerlKonig, one of Berlin’s largest ride-sharing providers, will help to roll out more zero-emissions vehicles to the sector. The company hopes to have an entirely electric fleet by the end of 2020, and is expected to place an order for the EQV.

XXXX-Class: delivering beer to the Outback in a Mercedes pick-up​ 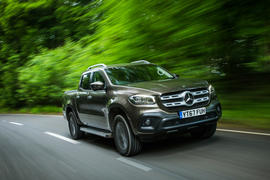 A luxury pick-up seems far-fetched but has Mercedes tapped into a lucrative niche?