Mercedes-Benz CEO Ola Källenius has firmly denied rumours that the firm is planning to take a controlling stake in Aston Martin.

Speaking to Autocar following the presentation of a new brand strategy this week, Källenius strongly denied reports that the company is set to increase its 5% shareholding in the British brand, with which it has a technical partnership in both passenger cars and Formula 1 through its AMG performance car division.

"No, we're not going to take industrial control of Aston Martin. But we have a very successful co-operation with Aston Martin and that will continue," said Källenius.

The denial of the long-rumoured Aston Martin takeover comes after Mercedes-Benz announced sweeping changes to its operations, including a renewed focus on luxury and electrification, specifically through its EQ, AMG, Maybach and new G (Geländerwagen) sub-brands.

In announcing the changes, Källenius said Mercedes-Benz aimed to reduce its fixed costs by up to 20% before 2025 through cuts in personnel, administration and research and development spending.

Mercedes-Benz’s current 5% shareholding in Aston Martin was cemented in a technical partnership originally forged with AMG in 2013. Källenius recently hinted to Autocar that the two firms could seek to deepen their ties: “The partnership is robust. Will it lead to more? Nothing I can comment on today,” he said at the recent S-Class launch.

Since then, Mercedes-Benz and Aston Martin have gradually increased their level of co-operation to include the supply of V8 petrol engines, electric platforms and, most recently, a sharing of hybrid drivetrains and intellectual property pertaining to components used in the Mercedes-AMG Petronas Formula 1 team’s FW10 and FW11 race cars, as well as the RP20 F1 race car of Racing Point, which will switch to Aston Martin branding in 2021.

Speculation of a possible Mercedes-Benz takeover intensified back in May when AMG chairman Tobias Moers was chosen to replace Andy Palmer as the CEO of Aston Martin.

Previously, it had been reported that AMG F1 boss Toto Wolff had purchased 14.5 million shares in Aston Martin at a price of £7.975 million in a deal initiated by Canadian billionaire and Aston Martin majority shareholder Lawrence Stroll, through his investment company Yew Tree Overseas Ltd.

Stroll, who has built a claimed £1.5 billion fortune through investments in fashion brands Tommy Hilfiger and Michael Kors, initiated a 16.7% buyout of Aston Martin in January at a price of £182 million.

Stroll’s investment formed part of £500 million in emergency funding provided to Aston Martin, which raised a further £207 million in equity and debt in June.

Under its then chairman, Dieter Zetsche, Mercedes-Benz explored the possibility of using Aston Martin to coach-build limited-edition Maybach models. However, plans in this direction were abandoned after the construction of a secret concept car that was never shown in public, according to Mercedes-Benz officials privy to earlier dealings between the two car makers. 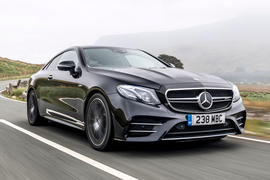 A corker of a mild-hybrid powertrain blends fireworks and refinement, but the E53's flat-footed AMG chassis should do more to entertain

Sebastian Vettel to race for Aston Martin from 2021​

Not only a denial, but a firm denial!

Not only a denial, but a firm denial!Anybody else looking forward to driving a Mercedes Martin! .... Aston Benz?

......if only the didn't have a phobia og Chinese capital. Being in the same stable as Lotus and Polestar would have suited Aston nicely!

8 October 2020
Firmly denied hey? So that means it's going to happen! It would make sense for them to buy/absorb AM, BMW has Rolls-Royce and VW has Bentley, lots of crossover opportunities and platform savings - as have already started. Anyway the price would be small change for MB. Shame to see AM go German like the above, but I'm sure it will happen one day, even as just a brand, and anyway MB would struggle to make the current AM range look uglier.

Firmly denied hey? So that means it's going to happen! It would make sense for them to buy/absorb AM, BMW has Rolls-Royce and VW has Bentley, lots of crossover opportunities and platform savings - as have already started. Anyway the price would be small change for MB. Shame to see AM go German like the above, but I'm sure it will happen one day, even as just a brand, and anyway MB would struggle to make the current AM range look uglier.

ahh!, a World with just one brand of Car!, oh the possibilities, what bit from multiple brands would be your ideal Car?

...already uses a Mercedes electrical architecture and their V8 engine, so the heart and brains of this vehicle already has Benes influence! While this fact is not a bad thing, I think many felt it was just a matter of time before Mercedes would make that move in acquiring AM. I believe the only hold up was Mercedes wanting to see if their second attempt with Maybach would take off and become real competition for at least Bentley, if not also Rolls Royce! Also, to see if AM's latest turn around scheme would do most of the heavy lifting, before MB swept in and took a control interest in the automaker. With the former AMG boss taking the reins of Aston, it would seem that everything is going to plan!