BACK TO ALL NEWS
Currently reading: Lamborghini will no longer attend motor shows
UP NEXT
Porsche Taycan: new rear-driven base model takes price to £70k

Lamborghini has announced that it will no longer attend high-profile motor shows, choosing instead to focus on smaller, bespoke events aimed directly at customers.

The move was confirmed by chief marketing and communications officer Katia Bassi, who told Autocar India: “We decided to abandon the motor shows because we increasingly believe that to have an intimate relationship with the customer is key and motor shows are no longer aligned with our philosophy.”

It means the company's new Sián FKP 37 hypercar will likely be the last Lamborghini to be unwrapped at a public motor show. The striking 808bhp hybrid made its debut at the Frankfurt motor show in September 2019, following the launch of the new Huracán Evo Spyder in Paris and the Aventador SVJ Roadster in Geneva several months previously.

Bassi told Autocar UK that Lamborghini will continue to run a “constant program of exclusive customer events”, including “unveils of exclusive new cars in special locations, exclusive tours and driving programmes for both customers and prospects, and lifestyle events where we can invite our clients, prospects and VIPs to join other like-minded people in appreciating many different aspects of the Lamborghini brand”.

She added: “Lamborghini always proves a significant attraction at motor shows, for both our clients and followers, as well as the broader public in attendance.

“Motor shows in their traditional format have provided an opportunity for people to see new cars and technologies under one roof in a timely way, but influences such as the internet and social media have fundamentally changed that traditional motor show role.

“Moreover, Lamborghini needs to consider its customers, who want exclusivity, personalisation and one-to one contact with our cars and our personnel.”

The Italian brand has yet to confirm when its first bespoke unveiling will take place, but a likely candidate is the 819bhp V12-powered, Aventador-based ‘SVR’ track car that has been previewed in a series of videos and images over the past few months.

The cancellation of the Geneva motor show in March this year and its subsequent semi-official transition to a digital event prompted widespread speculation that motor shows could be on the verge of dying out altogether.

Lamborghini was one of several brands to confirm its non-attendance prior to the event’s cancellation.

Sant’Agata will continue to reach out to its wider, non-customer fanbase with a new esports championship, partnerships with well-known clothing brands, a new app and its existing Super Trofeo and GT motorsport programmes. 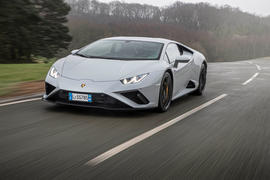 They can call it

what they want, what it really is, is another bout of VAG cost cutting wrapped up in media friendly news article..

Although I can understand

Although I can understand Lamborghini's reasons for not attending large public motor shows, I too will be amongst those lamenting yet another nail in the coffin of the splendid big international car exhibitions. As others have commented, I started going to motor shows with my dad from the age of 11 back in the early 1960's, and the experience undoubtedly fuelled my lifelong passion for cars and driving. A particular highlight at the Earls Court shows was being able to see expensive and exotic cars that most people can only dream about. Collecting masses of brochures, of course, was also part of the fun.

The most expensive brands were always careful to limit numbers of people on their stands, with access generally only granted to those who 'looked the part' and were thought to be serious buyers. Young lads didn't have much chance of getting close to those brands, but occasionally there was an exception: one year in the late 60's Jensen let anyone on their stand, but in limited numbers (no 'social distancing' thank goodness), so I got my first chance to sit in an Interceptor and try out actual electric windows, a first for me!

The relevance of all this nostalgia is how much big motor shows cemented my love of cars and spurred me on to buy many cars, going ever more upmarket (and costly!), as I progressed in my career. I wonder how many other kids had similar experiences of motor shows and dreams of someday driving or owning a supercar? So Lamborghini's decision is another small step in the demise of the big public shows and I see that as sad. Yes the internet etc is with us and you can download brochures, but somehow this is not the same as a 'grand day out' at an international motor show. There are, of course, events like those held at Goodwood, but tickets are not cheap and accessibility can be a problem for many. Perhaps these are all just changing times and car manufacturers are under threat from so many sources, so they have to do what they think is prudent to protect their business. I do wonder, however, whether it could be another reason for some young people gradually losing their enthusiasm for cars.

I remember the last time I

I remember the last time I went to the motor show at the NEC, about 30 years ago. Most of the upmarket stands were keeping ordinary people and kids away from the cars but, Mercedes Benz let anyone and everyone, including kids, all over and in the cars, on the basis, said one of the staff, that they were all potential future customers.
View all comments (6)