BACK TO ALL NEWS
Currently reading: Grey rules the roost as UK’s favourite car colour in 2019
UP NEXT
How Max Chilton and the McMurtry Speirling conquered Goodwood

SMMT figures show the hue keeps its number one spot from 2018, adorning more than one in five new cars
Close

The UK’s favourite car colour is grey for the second year running, according to statistics from the Society of Motor Manufacturers and Traders (SMMT).

The hue was the most popular shade on new cars sold last year. More than one in five new cars (22.6%) driven off forecourts were painted grey, while a total of 521,273 grey cars were registered in 2019, an increase of 5.3% on the year before.

The runner-up colours were black and white, meaning that almost two-thirds (60.7%) of all new cars in the UK last year were a shade of monochrome. The top 10 colours were largely the same as 2018, although beige, which had crept into the top 10, was replaced by a resurgent yellow.

While the overall UK new car market fell in 2019, turquoise gained 29.3% extra registrations, bucking the general trend. Silver, which has been in the top three 16 times in the past two decades, posted its lowest number of registrations in that time. Only 201,008 cars were bought in that colour. 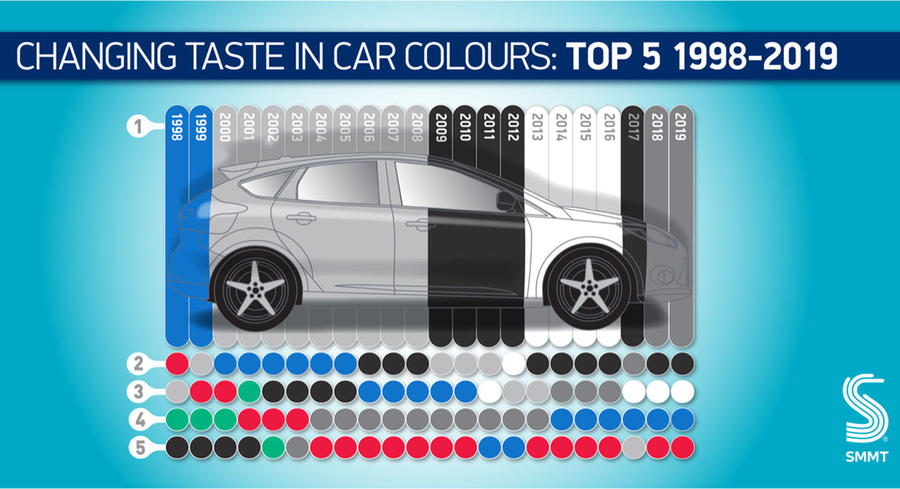 Although grey was the favourite across the UK, Scotland and the Channel Islands preferred white. Britain’s least favourite colours were maroon, cream and pink.

Popular colours varied according to car style. Black was the colour of choice for executive and luxury saloon cars, while drivers of small cars and zero-emissions vehicles tended to opt for white.

SMMT chief executive Mike Hawes said: “For most buyers, the colour is the first of many options they’ll select on their new car, and today there are more possibilities to personalise your car than ever before.

“Drivers can choose from many hundreds of models equipped with the latest low and zero-emission powertrains, advanced safety and connected tech and exciting comfort and convenience features. There really is something to suit every driving need – and colour taste – on the market in 2020.”

Matt Prior: campaigning for more colours and cameras

not sure the figures are correct

Silver for example is a lot lower than grey and my wife has a golf convertible reflex silver colour, which is more grey,and registered as silver and some cars registered as grey sould be dark silver ,I think these two colours have a large crossover,when is silver blue or black get registered as either silver,grey or black?

Any UK street is generally

Mazda have the right idea

Mazda have the right idea with their metallic red that seems to really show off their cars, and in fairness some of the Grey's are stand out colours and not drab but I do agree that there seems to be less colours to choose from.
View all comments (9)