BACK TO ALL NEWS
Currently reading: Fiat still interested in 124 Spider successor
UP NEXT
2025 Mercedes-AMG EV sports saloon to rival Porsche Taycan

The future of the Fiat 124 Spider hinges on the firm continuing to work with a joint-venture partner, according to the firm’s boss, Olivier François.

The 124 Spider has been withdrawn from sale in the UK, and although it is the second biggest seller in its class behind the Mazda MX-5 with which it shares its underpinnings, global sales remain slow.

“The 124 market is a niche one,” said François. “It is profitable business for us - but only because of the joint venture. It was an opportunity and we took it. It makes money and it adds a certain cool factor.

“But I accept that such a car may not be key to the future of the brand. It is not what I’d call a pure, absolute Fiat, but for now, it remains an interesting opportunity.”

The model, which shares a platform with the Mazda MX-5, was recently taken off the company's UK website line-up after just over two years on the market. However, the Abarth version, in Spider and hard-top GT form, remains on sale.

The car's removal from sale could potentially be due to WLTP emissions regulations. Its 1.4-litre Multiair turbocharged petrol engine is an older unit that has been in use by various Fiat Chrysler Automobiles brands for some years now and it may not have been cost-effective to upgrade it for the introduction of more stringent emissions tests late last year. 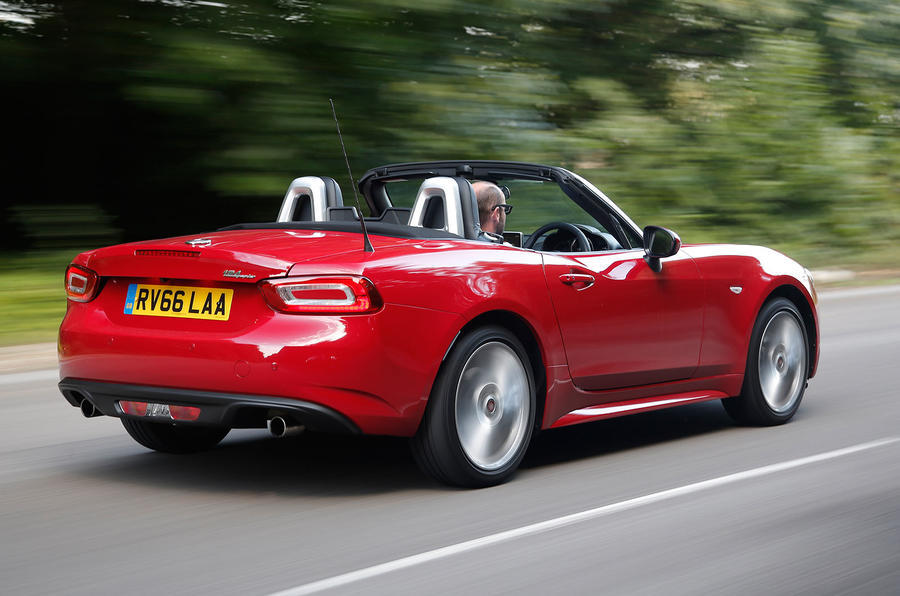 The Alfa Romeo Giulietta and Jeep Renegade are no longer sold with this engine option, although it is still in use in Abarth models. The facelifted Renegade now makes use of a newly developed 1.3-litre turbo unit, but it remains to be seen if that engine will be used elsewhere.

Fiat introduced the 124 Spider in the UK in summer 2016, around a year after its Mazda cousin. Sales of both have declined sharply in the US in the past year, with the Fiat down around 25% and the Mazda, badged Miata in the US, down 21% compared with 2017. However, sales of both in Europe have remained relatively stable.

This Fiat 124 Spider looks totally stupid anyway... why do they want to bring it to the mark????

How in the world do they expect to compete with other car manufacturers who are producing cars which are cheaper, faster and look 100 times better....

A few Abarth remain in showrooms?

If one were to be “generous” towards FIAT and their treatment of, regard for, their dealerships . . . it is suggested that the end of the “124” was ONLY announced, once they had all been sold, and none were remaining in showrooms.That “the Abarth version, in Spider and hard-top GT form, remains on sale”, probably - merely - indicates, that there are still (a few) Abarth versions remaining, unsold, in showrooms.

As a very pleased owner I really wonder about all the moans about the engine on this feed, entirely from people who haven't driven it. I tell you, this car's a blast! And I have owned (and own) all sorts of interesting petrolhead cars. The 124 is extremely rorty, loves to rev, has massive midrange. Fiat just haven't advertised the 124 here at all. I saw two on the road in 6 months and went to four Fiat dealerships before finding a spider in the metal. Well worth the search, it's a future classic.
View all comments (18)