From £20,0755
Jeep hopes that new engines and some stylish design tweaks will return its Renegade to the sharp end of the increasingly competitive small SUV class
Open gallery
Close

On the face of it, Jeep looks to be on a bit of a roll. With a new range of electrified drivetrains currently in development and an all-new A-segment SUV just over the horizon, the American manufacturer looks perfectly poised to respond to an ever-changing and increasingly competitive sector.

However, if you delve a little deeper, past the optimistic ‘future projections’ and new marketing strategies, you’ll discover that Jeep experienced a poor 2017 in the UK. Its market share dropped a whopping 55% over 2016, with sales dropping from 14,090 to 6380 cars. Perhaps unsurprisingly, the Jeep Renegade, with its reasonable price tag and UK-friendly dimensions, made up 4540 of these - more than 70%.

So, in effect, Jeep’s small SUV is keeping the show on the road. Hence the need for Jeep to treat it to a comprehensive mid-life update.

On the surface, the 2018 Renegade benefits from some subtle but surprisingly noticeable design updates. G-Class-esque LED headlights and tail-lights give the Renegade a slightly more distinctive aesthetic, while new 19in wheels and more aggressive bumpers apparently enhance ‘urban and lifestyle appeal’ – we’re not sure what that means either.

The most important changes, however, are found under the bonnet. Two new turbocharged all-aluminium petrol engines have been developed by Fiat Chrysler Automobiles with the aim of improving driveability and reducing emissions. The line-up is pretty straightforward: an entry-level 118bhp 1.0-litre petrol replaces the gutless 108bhp naturally aspirated 1.6 and a new 1.3 (available in both 148bhp and 169bhp configurations) replaces the 138bhp 1.4. 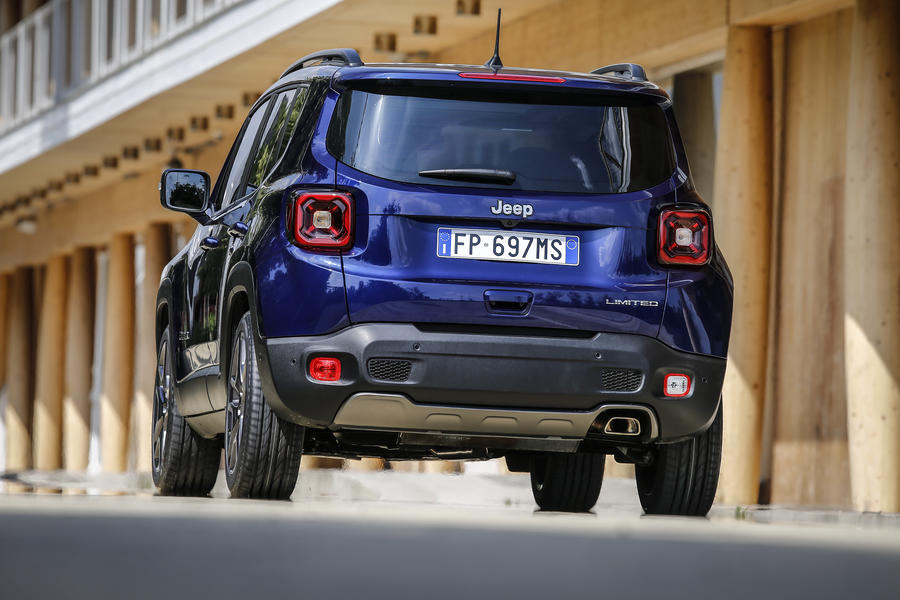 On paper, opting for Jeep’s new 1.0 petrol engine makes a lot of sense. Not only does it offer buyers the cheapest entry point into Renegade ownership, but it also promises to return a respectable 46mpg while delivering a decent amount of low-down grunt.

However, it doesn’t take long behind the wheel to realise that this engine, despite being turbocharged, just doesn’t have enough to shove the Renegade along with any kind of conviction. The wave of torque that should arrive at 1750rpm never really makes itself known, and even if you decide to rev the engine towards its redline, you never feel like you’re making quick progress.

Mercifully, the 148bhp 1.3-litre unit feels far stronger, endowing the Renegade with the kind of performance you expect from a small SUV. In-gear flexibility is genuinely impressive, and despite having the drag coefficient of a Georgian house, the Renegade is capable of venturing above 80mph with minimal fuss – just be prepared for a cacophony of wind noise generated by that bluff front end and huge door mirrors.

But don’t go thinking that the new 1.3 is faultless. Oh no. Despite offering up quite a bit more punch than the 1.0-litre, it’s let down by a jerky and surprisingly dim-witted dual-clutch automatic gearbox. Around town, the six-speed unit has a tendency to hesitate when trying to find the correct ratio, and then when you finally get moving and want to modulate the throttle, the engine often holds onto boost for a fraction longer than you’d like, resulting in unintended acceleration.

The end result is a car that's very difficult to drive smoothly, which is a shame because there’s nothing wrong with its objective straight-line performance. The range-topping 178bhp 1.3 comes with a more suitable nine-speed automatic gearbox, but it wasn’t available to test at launch; we’ll make sure to road test it in the UK later this year.

As for chassis changes, aside from a new set of 19in wheels, there aren’t any. The Renegade is therefore still plagued with the slightly sticky, over-assisted steering that we’ve encountered on other cars based on its platform (namely the Fiat 500X), while the 19in wheels have it jostling and shimming over the kind of broken surfaces that dominate urban environments. If you want a small SUV that offers hatchback-like fluency and precision, you’ll want to take a look at the Seat Arona or Mini Countryman instead.

Inside, Jeep claims that the Renegade benefits from ‘increased functionality and greater comfort’. In reality, it’s hard to detect any changes from the outgoing model. Interior quality is still several rungs below what you'll find in the Countryman or Nissan Qashqai, with hard plastics littering most of the cabin.

It’s not all bad news, though, because the optional range-topping Uconnect touchscreen infotainment system (as fitted to our test car) with its huge 8.4in screen, is genuinely impressive. It has logical menus, sharp graphics and handy shortcut buttons, and, better yet, it comes with Apple CarPlay and Android Auto, so you can use apps from your smartphone (such as Google Maps and Waze) while driving. 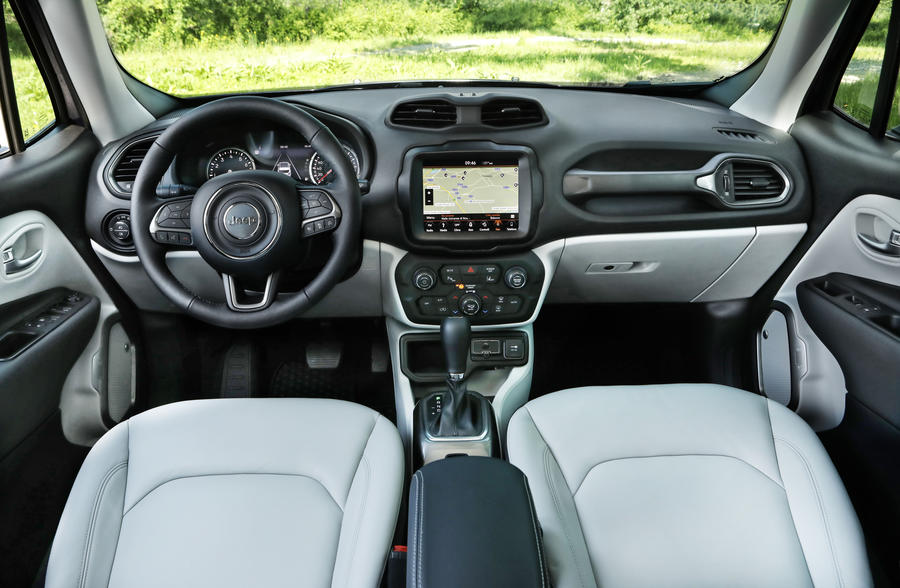 While the updated Renegade certainly has its merits - funky styling, improved infotainment and, if you opt for the entry-level 1.0 engine, decent fuel economy – it still isn’t our small SUV of choice.

The Seat Arona delivers a far more rewarding driving experience, as well as a stronger range of petrol engines, and the Volkswagen T-Roc has a classier interior and more refined on-road manners.

Jeep has yet to finalise prices and trim specifications, but unless the Renegade benefits from a serious price cut, we still struggle to recommend it. 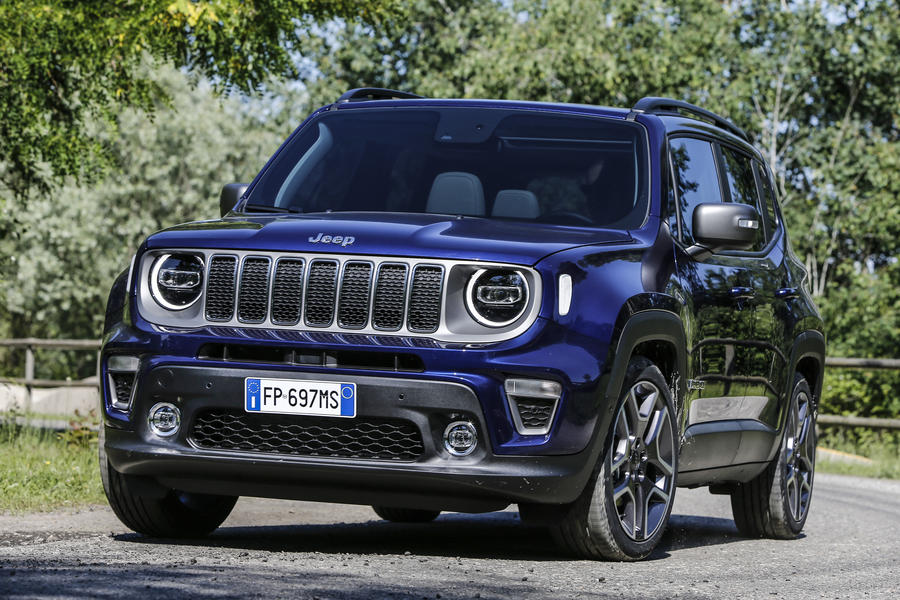 I dont think the star rating

I dont think the star rating is because its an awful vehicle, but because of Jeep UKs stupidly optimistic prices. For what ever reason they seem to think Jeeps should be sold at premium prices. Look at the US prices to see what they should cost. And at those prices this would be up against lesser machinery, and deserve a higher rating

I dont think the star rating is because its an awful vehicle, but because of Jeep UKs stupidly optimistic prices. For what ever reason they seem to think Jeeps should be sold at premium prices. Look at the US prices to see what they should cost. And at those prices this would be up against lesser machinery, and deserve a higher rating

You make a good point because the Renegade is built in Italy for the European market so there are nil tariffs (at least for EU markets) and very low transport costs. But price or not, the Renegade is still a pretty poor SUV.

Many American car companies think Americans are happy to put up with cars that are frankly rubbish and that's why so many of them turn out that way. Unrefined, dynamically poor and cheap feeling. However the reality is that Amercians want cars that are up to the standards of most of the rest of the world and they get frustrated that most of their home grown cars are naff. Sure, this probably doesn't matter so much with pick-ups but when it comes to SUVs and cars, they want something decent, even if they have to pay more. That's why nearly all the top selling cars and SUVs in America are from foreign companies. Even the Ford Fusion suffers poorly in standards compared to the identical Mondeo, the latter of which is higher quality, more refined and dynamically more adept.