BACK TO ALL NEWS
Currently reading: JCB unveils hydrogen-fuelled combustion engine technology
UP NEXT
Prodrive P25 is uprated Subaru Impreza 22B with 400bhp

Heavy machinery maker JCB has announced a hydrogen-fuelled piston engine that emits no CO2 and which it believes can help the transport industry achieve the UK government’s zero-emissions target quicker than any existing solutions.

JCB claims its research shows that the new engine – based on the hardware of JCB’s Dieselmax 448 four-cylinder engine but with substantial modifications at the top end – not only produces no CO2 but also offers important advantages over battery-electric and hydrogen fuel cell solutions, both of which are considerably more expensive.

JCB’s hydrogen engine is naturally aimed at its own off-highway applications but, after successful initial trials in excavators (which put far greater demands on engines than cars and trucks), the company’s engineers believe they have a technology that can be successfully applied in a much wider range of vehicles. 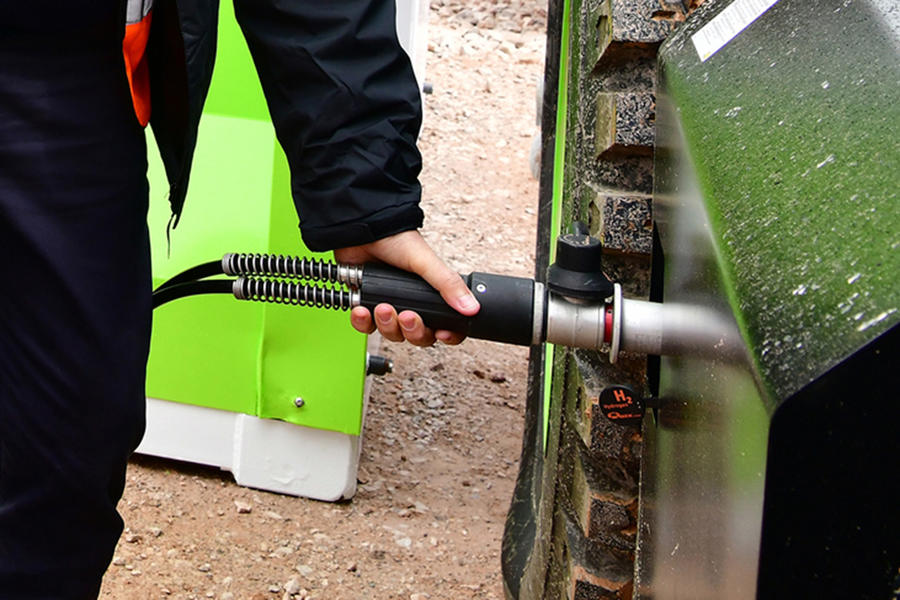 JCB’s chairman, Lord Anthony Bamford, decided to set up a specialist hydrogen engine research team at the company’s Derbyshire R&D centre in July last year after growing increasingly concerned about the impending loss of piston engine expertise and infrastructure and the disbanding of a well-integrated supply chain.

He explained: “We’re not arguing for diesel any more; that horse has bolted. Zero carbon emissions must be the target, but we don’t believe that batteries and fuel cells are the only solutions.”

Lord Bamford and his engineers believe they have more of a real-world view than most in the industry, because they have in recent years launched a very successful range of battery-electric diggers, plus they have considerable field experience of 20-tonne prototype excavators powered by hydrogen fuel cells. The hydrogen engine’s big advantages, explained JCB innovation chief Tim Burnhope, are that it can be speedily and affordably brought to production, while existing ICE know-how and infrastructure will remain relevant.

JCB’s prototype engine has an all-new induction system (lowered compression, new pistons, high-pressure common-rail fuelling and port injection) but it is designed to match the performance and driving characteristics of existing machines.

As for toxic emissions, even the ‘raw’ exhaust from JCB’s experimental hydrogen engine contains less NOx than a diesel, even with the latest after-treatment that cuts diesel pollutants by 98%.

Further measures can reduce this to what Burnhope calls “a zero-impact level”, where content is simply too small to measure. The only significant exhaust emission from a JCB hydrogen engine prototype that Autocar observed in action were puffs of steam on start-up.

JCB plans additional development of its hydrogen engine but already has its eyes firmly set on production.

“Our view is that there must be an opportunity here for people making traditional engines to move to zero CO2 as quickly as possible, using mature technology and an existing supply base,” said Burnhope. “And if you care about climate change, speed is crucial.”

Shame that industrial scale production of hydrogen is fossil fuel based.

You're not doing anything green, and probably worse than just using a diesel engine.

Agreed. 99% of hydrogen is currently produced from natural gas, and overall is more carbon-intensive than just using natural gas directly. In future, green hydrogen, produced by electrolysis, is the only clean way forward, but requires three times the electricty to make as just using electricity directly.

My takeaways would be customers would probably prefer the silent nature of battery or fuel cell. And battery has a massive advantage as not many farms or building sites are within 10 miles of the UKs 7 commercial hydrogen fuel pumps. And having to drive more than 10 miles each way to get fuel would be massively problematic. Especially as you can't just drive to the pump in your land-rover and fill up 5 Jerry cans of hydrogen and come back and fill up your tractor or digger. Hydrogen stays in very expensive, and very heavy pressurised containers.

So presumably, on a green field site that's miles from anywhere, they'll need diesel powered generators to charge up the electric construction machines.

Investigating alternative fuels is absolutely crucial. There is absolutely no way on earth that we'll be able to ban the sale of all ICE vehicles by 2030 in this Country.

What sort of construction site do you have in mind ? A place where some buildings will be put up, but won't be connected to mains electricity ? I have never heard of such a devleopment; can you name one ? Presumably connection to the grid is a basic part of every construction project, so the project managers can simply arrange that as one of the first activities in the plan.Battery vehicles already account for 76% of sales in Norway. The UK National Grid is confident that with an incremental and undramatic upgrade programme, the Grid can cope with the BEV transistion. Can you substantiate why "absolutely no way on earth that we'll be able to ban the sale of all ICE vehicles by 2030 in this Country." This looks rather like an unsupported claim. Do you have any back-up for it ?