Christmas came early when we got the chance to play with – sorry, test – three JCBs in a quarry called Kevin
Open gallery
Close

Most presents fit under the tree, but three I’ve been lucky enough to receive this year require a 500-acre quarry called Kevin. Located in the Staffordshire countryside, this industrial playground has, despite its name, a serious purpose as the home of JCB Research, the digger manufacturer’s development centre, where tomorrow’s machines are put through their paces.

It’s also the home of JCB Demonstration, where the company shows off its new vehicles to customers as well as to scribes like me who have seen diggers pushing earth around and reckon driving one is as easy as falling off a log. Well, after a day spent doing just that, I’m here to tell you that it ain’t. Never again will I walk past a Backhoe Loader, the digger that JCB has been making for almost 70 years, slightly less than the company has been in existence (it was founded by Joseph Cyril Bamford in 1945), with nothing but respect for its operator.

If you think patting your head and rubbing your belly is hard, you want to try operating a Backhoe’s joystick controls. There are two, and on the Backhoe, they operate the boom and dipper (the two jointed arms) and bucket or shovel and, depending on the model, have buttons and switches controlling features such as gear selection, diff lock and power boost. Each works in left and right as well as fore and aft planes. If it’s one of JCB’s tracked diggers, there will also be a couple of hand- and foot-operated levers for steering the vehicle.

To the right of the driver are panels of switches that control functions such as engine revs, bucket lock and unlock, travel speed and heating and ventilation. Depending on the model, two switches ahead of the driver deploy the vehicle stabilisers for uneven ground. 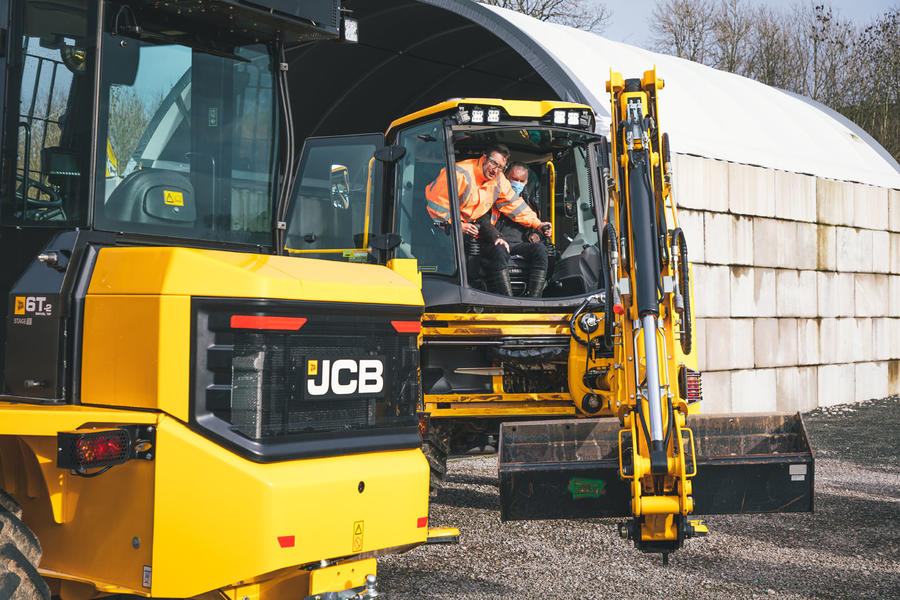 In short, a modern JCB is a technical tour de force that, despite its uncannily smooth operation and excellent ergonomics, requires a good deal of practice to master to the point that it feels like an extension of the driver. A driver such as Matt Lucas (no, not that Matt Lucas), JCB Demonstration’s team leader. In his hands, a goliath such as the 220X LC, the firm’s newest tracked excavator, can be as gentle and precise as a surgeon. “I could comb your hair with it,” he tells me as he deftly skims the ground with its 600kg bucket. Thank God I’m going bald. 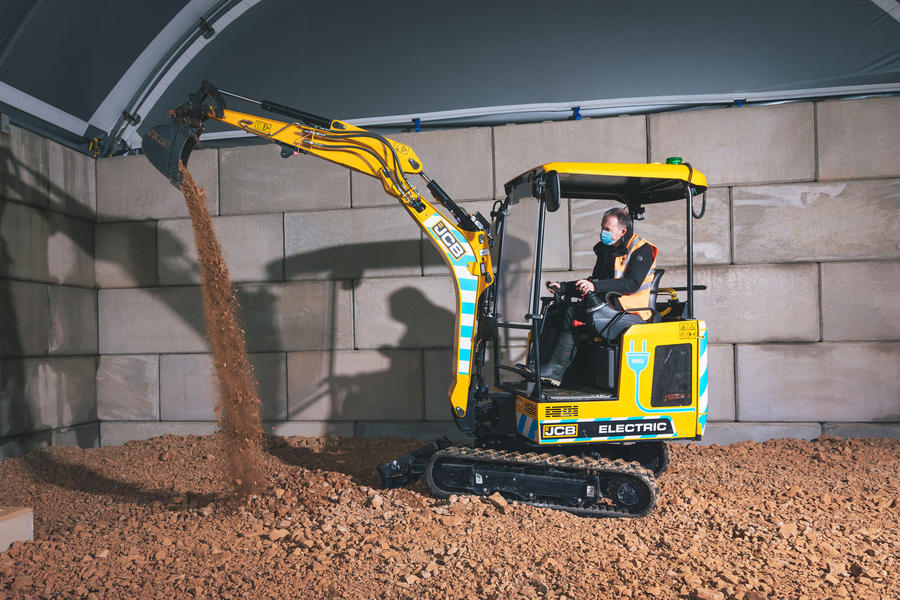 Matt wants to show me three JCBs: the 220X, a Backhoe Loader 3CX and a revolutionary new electric mini excavator called – this is the no-nonsense world of construction, remember – the 19C-1E.

Once I’ve got a basic grip of its controls, I discover the 19C-1E is as capable of scooping up rubble and scurrying around on its tracks as I imagine its fossil-fuelled equivalent, the 19C-1, to be. Just like an electric car, torque is instant, resulting in effortless shovelling. Its four lithium ion batteries pack enough power to last a full working shift and can be rapid-charged in 2.5 hours.

Still, impressive though it is, I can’t see the 1E competing on level terms with diesel diggers. “Don’t underestimate it,” says Matt. “Not only can the 1E work outdoors but it can do so at night without disturbing anyone. Its biggest advantage, though, is that it can work in emissions-sensitive environments and inside buildings without requiring expensive air extraction systems.”

It’s a proper little mole. And flicking a switch brings its two tracks closer together, enabling me to drive it down a narrow ramp. Try doing that in a Tesla. 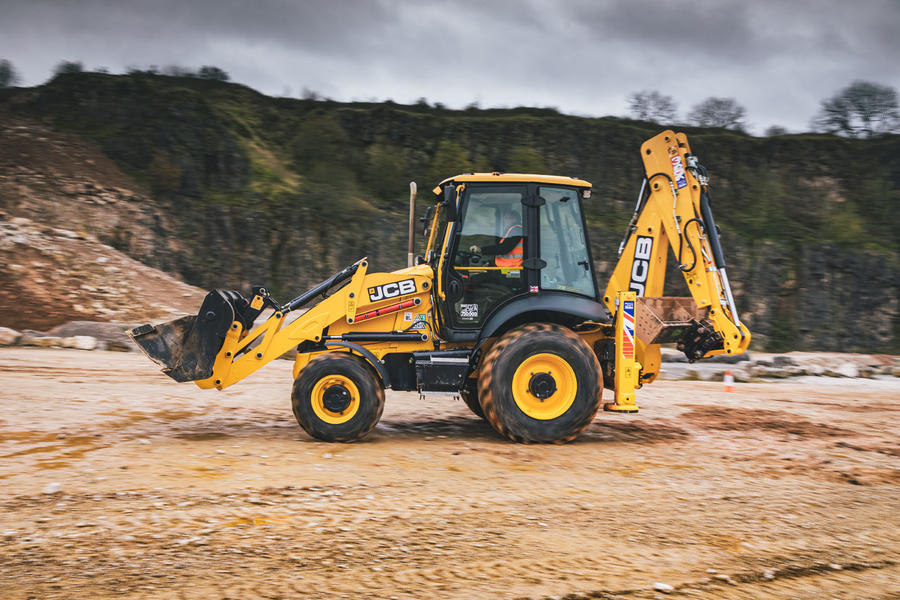 JCB invented the backhoe loader, a versatile, wheeled digger with a front shovel and a rear excavator arm. It was the making of the company and the 750,000th model rolled off the production line earlier this year. Matt wants to show me the latest version, the 3CX, with features including automatic stabilisers, JCB’s Smooth Ride System and Torquelock, which reduces on-road fuel consumption.

The cab is packed with controls great and small, as well as touchscreens. Joysticks and levers aside, it all looks and feels car-like: tough but intelligently laid out. Practical, too: the steering wheel adjusts for reach and rake and there’s a column shift for the four-speed gearbox.

Backhoe loaders are among the most complex diggers to operate. Like the 19C-1E, the trick when operating the arms and shovels is to do so sensitively and fluently. Unfortunately, I manage neither, with the result that they jerk to attention and the shovel clangs against the dipper. It’s a strain recalling which joystick to move and in which plane, but by the time Matt cries enough, I’m getting the hang of it. Sort of. 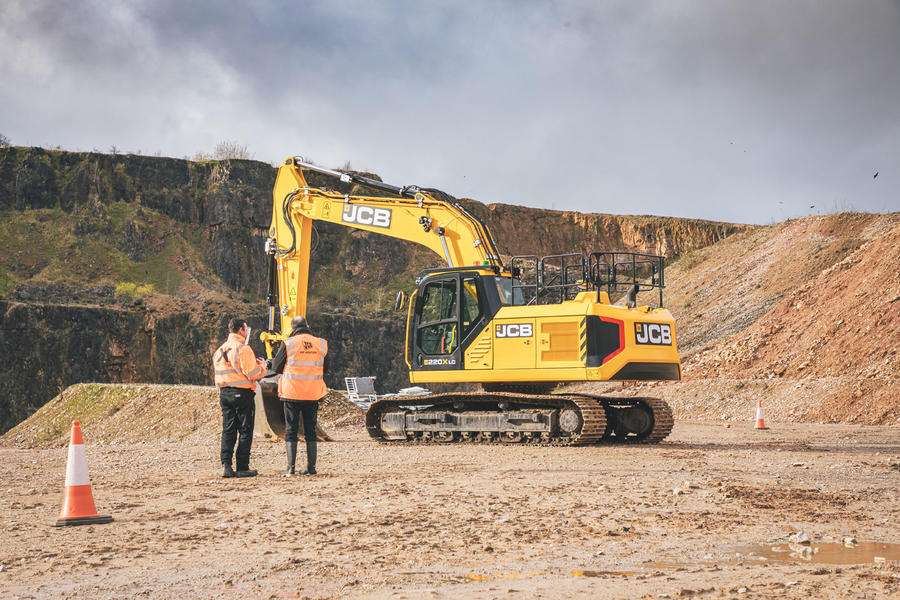 This 22-tonne machine dwarfs the Backhoe and 19C-1E. Itching to flex its muscles, I clamber up and over the tracks and haul open the cab door, a solid affair that closes with the finality of a slam-door carriage. JCB spent four years developing the 220X. Highlights include a larger and quieter cab with controls designed for easier use, a wider superstructure that allows the boom to be centrally positioned, larger hydraulic hoses…

Hydraulic hoses… Okay, I’m getting all this off the spec sheet. What really matters is that, like Muhammed Ali, the 220X LC floats like a butterfly and stings like a bee. You wouldn’t believe the fine control this monster ground worker, with up to 15,000kg of force, is capable of – in the right hands. I’m happy just to dig a few shallow holes before taking it and its 4.8-litre diesel engine (590lb ft at 1500rpm) around the quarry, a trip that it accomplishes with ground-crushing ease. 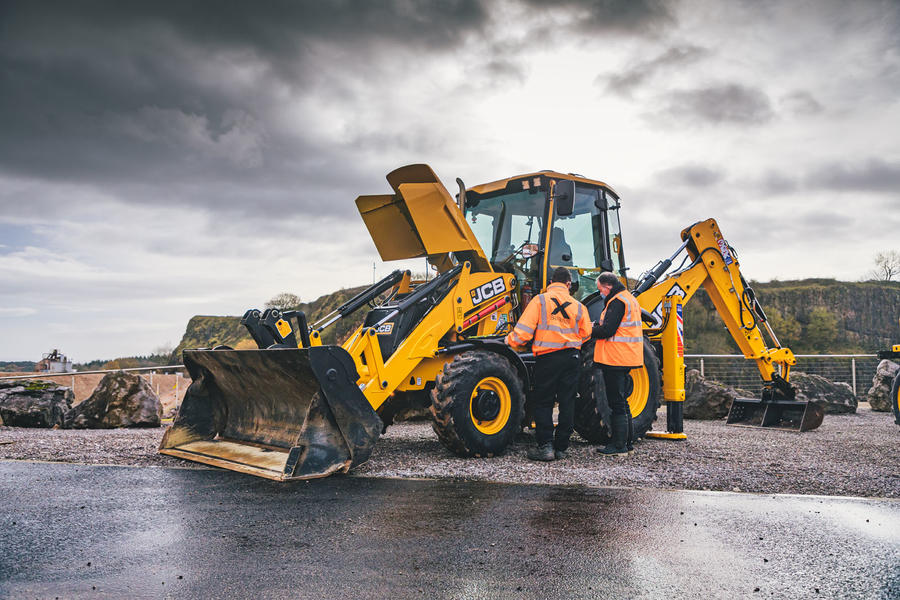 So what have we learnt? First, that in these difficult times, JCB is a British manufacturer that we can be proud of. Not only does it make most of its machines’ major components, including the engines, but it even has a factory on the home turf of American arch-rival Caterpillar.

JCB’s machines are modern, feature rich and efficient. Now, with the arrival of the electric 19C-1E mini digger, they can claim to be environmentally friendly, too. On that point, JCB is trialling a hydrogen-powered version of the 220X excavator, using technology developed by JCB’s sibling firm, bus manufacturer Wrightbus. Kevin: it’s a funny name for a quarry, but one you should take seriously.

How to build the World's Fastest Tractor: JCB Fastrac 2 timelapse

Brexiter Sir Anthony Bamford has put all his workers closer to poverty. Giving Boris bungs via JCB and himself, he wanted to see his workers paid less, and that's exactly what he did.

He's taken away his workers rights, and freedoms, just for what? $4.5bn wasn't enough for him?

If I were in a position where I needed to buy this type of machinery (and I once was) I'd buy anything but JCB. Bamford wants to put me in to poverty and badly affect my business and livelihood so I will not be helping him.

The sharp end, Happy new Year to you all by the way, anyway JCB, the humble London Taxi, the double decker Bus, all seen all over the Planet, I couldn't name another brand that make diggers etc, they've all brought money, investment into the UK, it's not directly a Government that has lost jobs, and what we're reading about is, how they work, how a complete novice can just about operate them, and also showing an EV machine too, let's leave politics at the Door,and talk about cars.

Let me know how much of your income you would be willing to give up for Bamford and for Boris's Brexit.

And will you then be compensating those who you've put out of work or take business away from?

Let me know how much of your income you would be willing to give up for Bamford and for Boris's Brexit.

And will you then be compensating those who you've put out of work or take business away from?

Just give it a rest and stop bringing in politics to car articles, save the brexit argument for another site. Get it?

Just give it a rest and stop bringing in politics to car articles, save the brexit argument for another site. Get it?

Get over yourself. You really need to.

Thats obviously why so many want to work for jcb , I live nr kevin quarry and several jcb factories  and the area would only have alton towers and there modest wages , Gordon brown and Blair decimated the Mills  in Leek with the cheap textiles he wanted to reduce inflation , he keep rates in the building trade down by allowing unchecked immigration,  and  persuaded the youth to go to  university instead of vocational trades , while at the same time limiting places for doctors and nurses to again promote immigration  , bamsfords pay some of the best money around here , spose your one  of the 53 of 56 who failed the drug test a few yesterday ago to work there and fell bitter ?..