BACK TO ALL NEWS
Currently reading: Facelifted Mercedes-Benz CLS and CLS Shooting Brake revealed
UP NEXT
New Hyundai Bayon to launch in 2021 as entry-level crossover

Mercedes-Benz has revealed a facelifted version of the CLS and CLS Shooting Brake in a series of official photographs ahead of a planned public premiere for the swoopy four-door saloon and five-door estate at the upcoming Goodwood Festival of Speed.

Set for UK sale from September, the lightly reworked CLS receives a number of subtle mid-life changes and an extended line of options, including Mercedes-Benz’s latest Multibeam LED headlamps as well as new AMG Line Plus and Night packages that further extend the range of individualisation possibilities.

As hinted to by earlier spy photographs of various CLS prototypes caught testing, there is very little to distinguish the facelifted model from the car it replaces. External stylistic changes amount to little more than an altered front bumper boasting greater structure and larger air ducts, a subtly reshaped grille with a so-called diamond pattern plastic insert and revised headlamps that now come as standard with LED operation for both the low and high beam as well as the daytime running lamps.

It’s a similar story inside, where Mercedes-Benz’s design team have provided the CLS with a number of subtle upgrades within a familiar looking cabin, including a new free-standing monitor that measures 8.0 inches in diameter, a redesigned three-spoke multi-function steering wheel and simplified operation for the centre console controls.

In line with other recent new Mercedes-Benz models, all engines made available on the facelifted CLS comply with EU6 emission standards, including the four-cylinder diesels which receive urea exhaust treatment technology. New to the line-up is the CLS220 BlueTec. It supplants the CLS250 BlueTec as the entry-level model, with a turbocharged 2.1-litre four-cylinder common rail diesel engine producing 168bhp and 295lb ft of torque.

Joining the new CLS220 BlueTec in the UK line-up will be a revised CLS350 BlueTec, also running urea-injection exhaust treatment. Its turbocharged 3.0-litre V6 common rail diesel engine is down by 7bhp at 254bhp but retains the same stout 457lb ft torque loading as before.

Continuing at the top of the line-up is the CLS63 AMG. Its twin-turbocharged 5.5-litre V8 now comes in just one state of tune equal to that of the earlier Performance Package option, with 549bhp and 590lb ft of torque. Left-hand-drive markets receive an even more powerful 4Matic variant punching out 577bhp and the same 590lb ft. But in a move mirroring that of the facelifted E-class, it won’t be sold in the UK owing to Mercedes-Benz’s decision not to engineer it in right-hand-drive form.

In a further change, the facelifted CLS receives a nine-speed automatic transmission as standard in all but the range-topping CLS63 AMG model. The so-called 9G-Tronic unit, which uses a steering wheel-mounted shift stalk to free up space at the base of the centre console, replaces the earlier seven-speed automatic, the 7G-Tronic.

The CLS63 AMG continues with AMG’s seven-speed SpeedShift transmission. As fitted to the outgoing model, it forgoes a conventional torque converter for an automatically operated clutch for faster shift times and added performance potential. 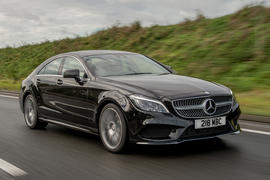 As part efforts to enhance its reputation for leading safety technology, Mercedes-Benz has provided the facelifted CLS with a number of new features. Standard fit features now include Collision Prevention Assist Plus, which automatically applies the brakes when an imminent impact is detected.

Among a long list of options are the new Multibeam LED headlamps. Claimed to outperform the latest laser lights being touted by Audi and BMW, they use a stereo camera mounted within the windscreen to detect on-coming traffic and automatically adjust 24 individual LED projectors so as not to dazzle other motorists.  Each LED can be dimmed in no less than 255 stages, allowing what Mercedes-Benz describes as unrivalled broad and bright illumination of the road surface and road periphery.

the mark 1 CLS was a head

the mark 1 CLS was a head turner. it was a fresh entry, completely original and looked the piece. even though I'm not the biggest Merc fan that CLS hit every note about what Merc is about and changed my opinion. the revamps ever since don't look that good. there are unresolved creases that don't make any sense and its not a clean, fluid and subtle looking car. those rear tail lights are just awful.
JOHN T SHEA 21 June 2014

Whether it is a pop-up screen

Whether it is a pop-up screen or not, it would still look bloody awful when in use, as if someone has bought a tablet and decided to stick in on the dashboard. Problem is though, to ensure the screen is in the driver's line of sight, what else could Mercedes do without changing the design of their fascia which has been deliberate to look they way they do? Stick it where the stereo is, then it'd be low. Or, in the CLS's case, borrow the top half of the dashboard from the E-Class (the lower part is identical) which features an integral screen, but then it just doesn't look as nice as the CLS's (minus the screen) - although the pre-facelift CLS had an integrated screen similar to the E-Class'. And it's the same issue with the A and C-Class too, nice looking dashboards which can't really accommodate screen without ruining the design, so they've almost had no option bu to sit them on top of the dashboard. Only a different design language for their interiors would solve the problem.
View all comments (11)