BACK TO ALL NEWS
Currently reading: Volkswagen's currywurst factory: motoring's strangest production line
UP NEXT
Tesla to expand select UK Superchargers to other electric vehicles

Last year, 6.81 million examples of it rolled off the production line at the firm’s Wolfsburg factory, more than any other part. Yet you won’t find it on any Volkswagen car – and you definitely won’t find it being used by any other VW Group brand. That’s because, as you may have guessed, VW part 199 398 500 A is a sausage. 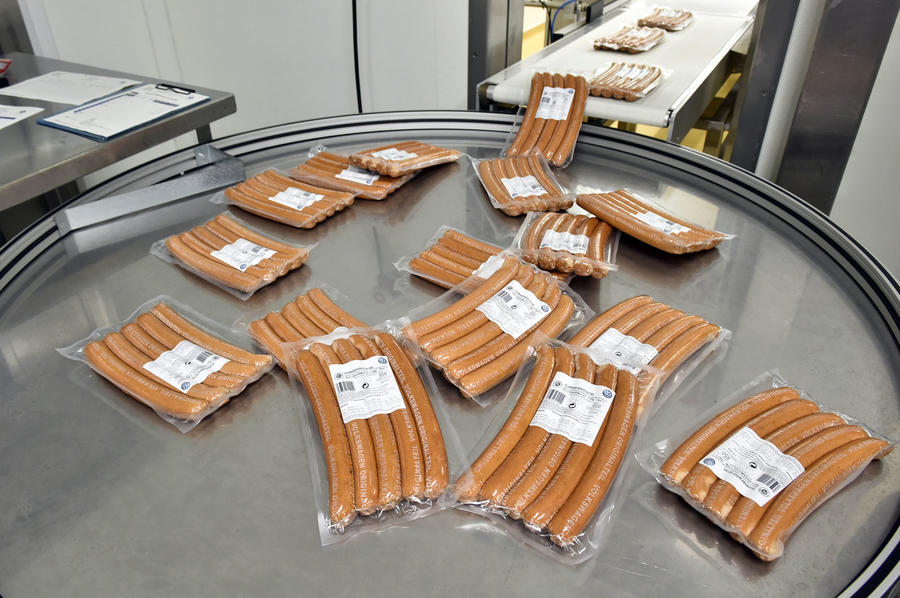 A currybockwurst, to be precise – a 170g, 25cm-long (in standard form) pork sausage infused with spices, usually served doused in curried ketchup with a generous side of chips. And, for 45 years, VW’s currywurst has arguably been the fuel on which one of the world’s largest car firms has run.

Volkswagen has produced food for its workers on site at the Wolfsburg plant since it opened in 1938, initially because of the factory’s remote location. It’s a massive operation: last year, VW’s catering division produced 13,805,370 portions of food. VW started producing currywurst in 1973 – the year before the Golf was launched – and it has been a staple of Volkswagen’s staff restaurants ever since. It’s now so popular that it’s sold in local supermarkets and football stadiums. No wonder, then, that Hern Cordes, the firm’s catering and hospitality boss, says: “Volkswagen has a lot of brands and badges – and currywurst is its own brand.” 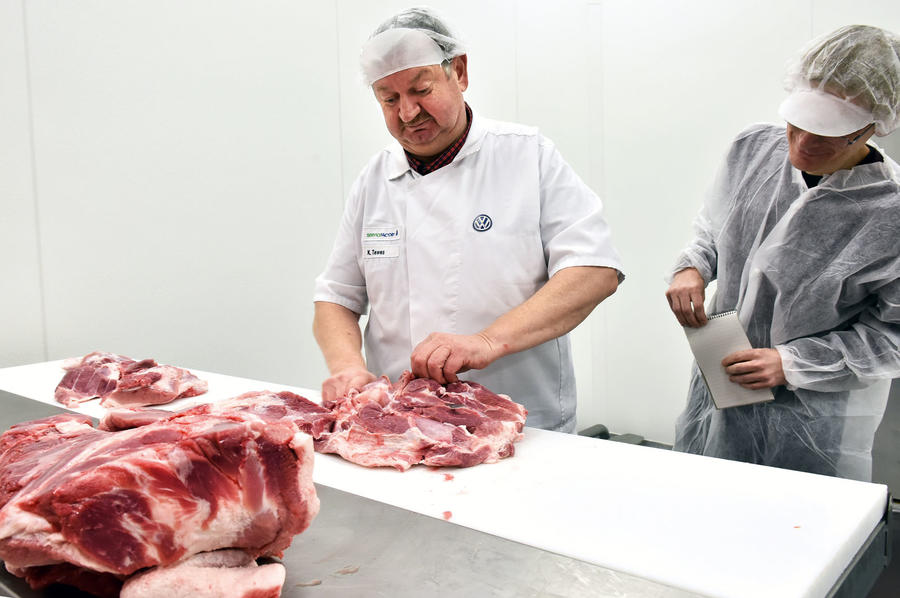 Intrigued by the currywurst’s cult status, Autocar asked Volkswagen if we could visit Wolfsburg and help make some. After all, what’s the, er, wurst that could happen? Amazingly, VW agreed, giving us exclusive access to the firm’s butchery located in a small corner of its service factory in a corner of its vast Wolfsburg plant. Inside, a team of 30 workers produces up to 20,000 sausages per day, which adds up to 1181 tonnes of food per year. Demand has grown greatly in recent years, with the butchery producing 264% more food than it did in 2009.

Leading the team is head butcher Franco Lo Presti who, surprisingly for the fleischmeister in charge of producing one of Germany’s most treasured foods for one of its biggest firms, is Italian. That said, he’s the most German Italian you’ll ever meet, having worked in the Wolfsburg butchers since 1978 and taken over the top role 12 years ago. “I love this job,” he says, with undisguised passion. “Once you’re in the butchery, you work here until you retire. You don’t want to change jobs.” 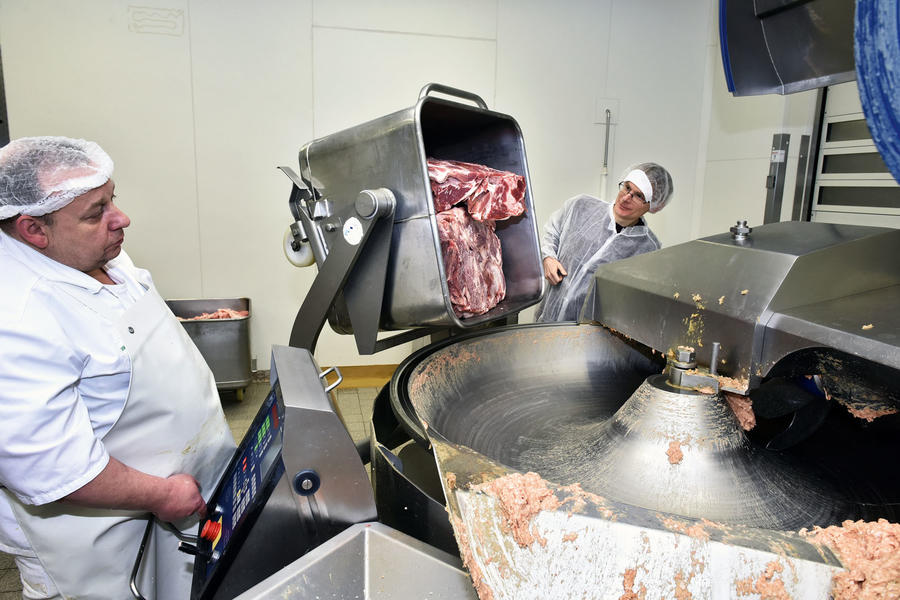 Presti’s passion is reflected in the numerous honours VW’s sausages have won, from food fair prizes to gold awards from the German DLG food standards agency. The firm believes that its currywurst competes at the premium end of the sausage market: Presti, adapting an old analogy for VW Group synergy, describes it as “the Bentley of currywurst”.

Remarkably, given that the similarly aged Golf will shortly reach its eighth generation, the currywurst has had only one mid-life facelift. Originally a mix of beef and pork was used, but the beef was phased out during the 1990s BSE crisis. Since then, it’s all pork – and no filler. It has fat content of 20%, compared with 35% for most bockwurst. Since 2010, the butchers has also produced a wheat-based vegan currywurst (using tofu failed to produce the right consistency), although you sense Presti isn’t entirely convinced.

The VW butchery originally processed whole animals on site, but now receives two different cuts of pork from suppliers. When work starts at 6am, the first task is to manually process each cut, slicing away excess fat with the sort of deft craftsmanship you’d expect to see going into premium hand-built cars. 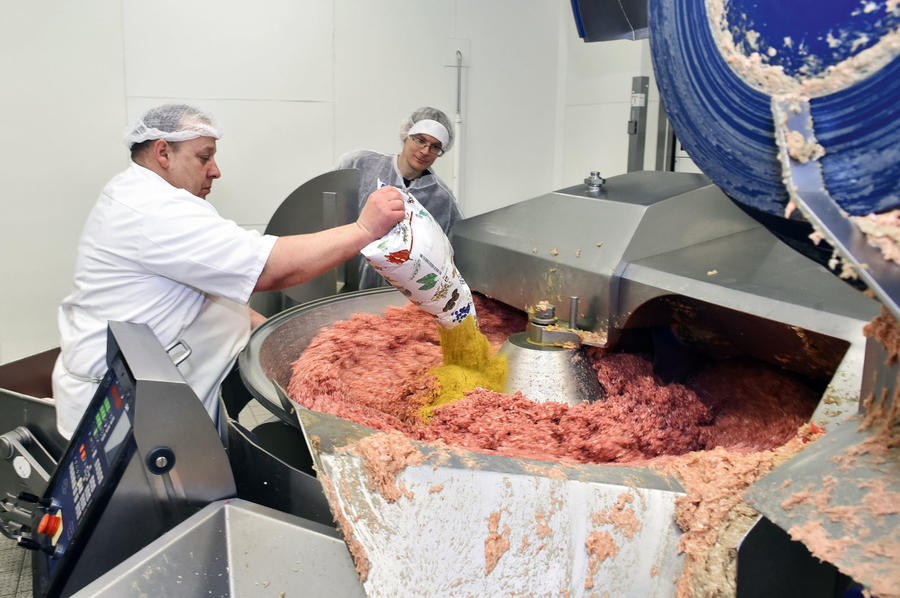 Once prepared, those cuts are then fed into an industrial grinder. It’s at this stage that the magic happens, with the all-important spice mix added to the meat as it churns. The mix is a closely guarded secret, virtually unchanged since 1973 and shared purely on a need-to-know basis: Presti will admit only that it contains salt, pepper, curry and ginger. That said, the bag containing the mix is adorned with pictures of most of the ingredients – although Presti notes that the real secret concerns the quantity of each.

That I can’t reveal, although I can tell you that watching raw pork being finely ground close up at 8.30am is exactly as unpleasant as you’d expect, even if it is mildly tempered by the pleasant whiff of curry as the spice is worked into the meat. Once ground into a thick – and wholly unappetising – paste, the mix is transferred to another machine, which squeezes the meat down and feeds it into the outer sausage skin – which has ‘Volkswagen Originalteil’ written on it. The string of sausages emerges dangling from a conveyor belt, and this is where I’m put to work. Each string has to be thread along a thick wooden pole by hand, then carried across to a huge rack. I prove moderately competent at feeding the pole through, although the surprising weight of a full string nearly catches me out. 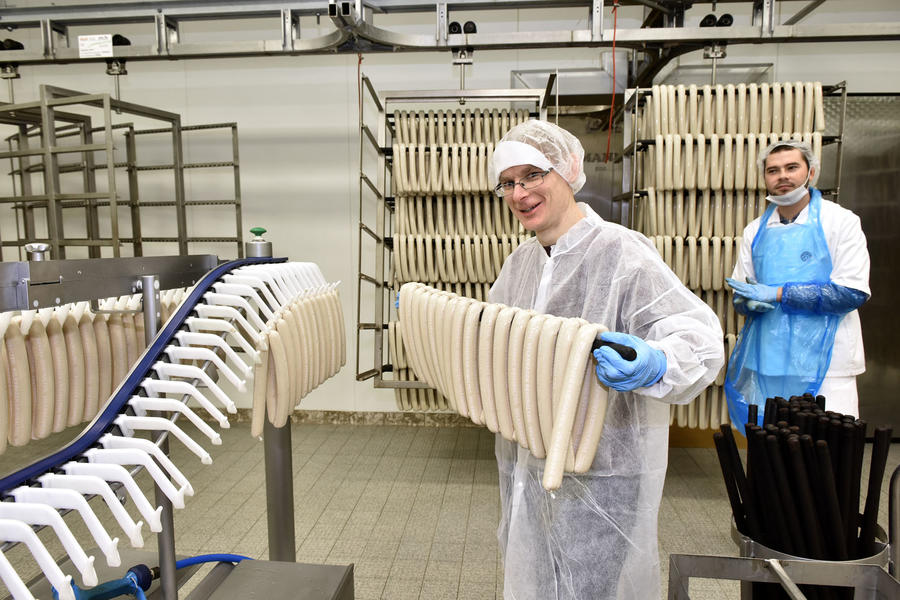 Once each rack is full, the currywurst are dried and transferred to a huge oven to be smoked over beechwood, then steamed for 100 minutes at 176deg C. When the oven is opened after that process, the aroma of wood-smoked curried sausage is, frankly, incredible. Even with memories of the uncooked paste in my mind, I can’t resist a taste when offered. And it is good.

After that, the racks of sausages are cooled, before being wrapped in packs of five. Each pack is labelled, then loaded into boxes for distribution. Around 40% of the currywurst will be sent to the staff restaurants in VW’s six German factories, with 60% sold in shops and elsewhere. Packs are sent to dealerships across Europe to give to new customers, and the firm is even closing on a deal to supply them to a restaurant in Singapore. 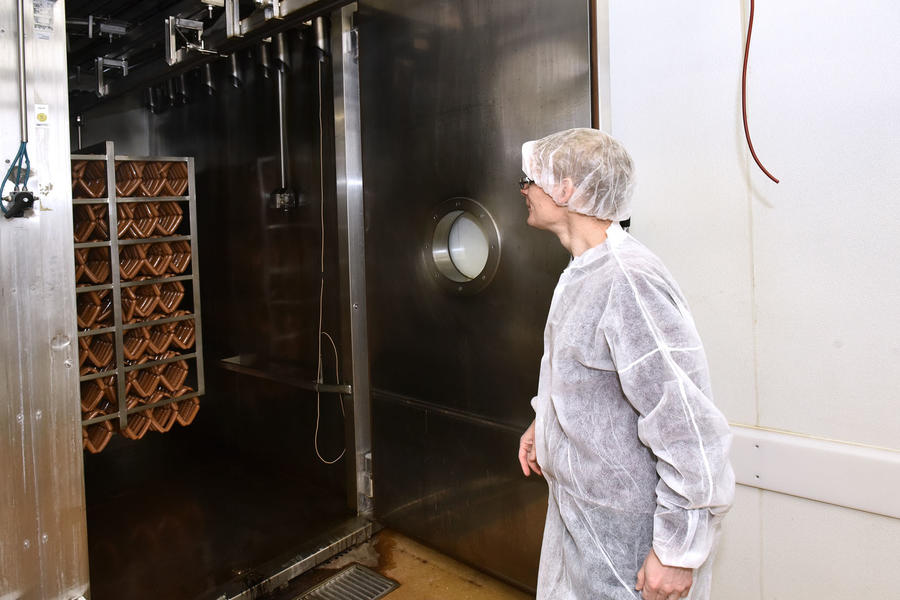 Such enterprises help VW to offset subsidising half the cost of staff meals in its restaurants, which Cordes says is hugely important: “People will be more productive if we treat them the best, so they will build the best cars.” And that’s why you can buy currywurst in Wolfsburg 24 hours a day: there’s always a shift worker who wants to snack on their favourite sausage.

Under its Transform 2025 programme, VW is currently in the midst of a huge revamp of several of its plants, readying them to produce its ID range of electric cars. But as the car industry is set to change beyond recognition, you can be certain that there will be at least one constant in VW’s plants: currywurst. 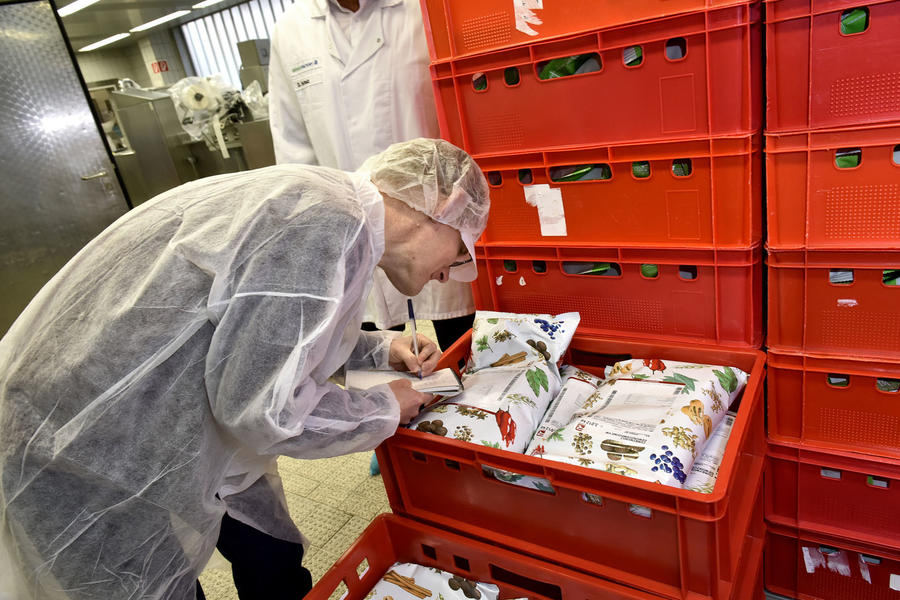 “It’s a cult,” says Presti. “It’s a statement for Volkswagen. If there wasn’t currywurst in the canteen, there would be trouble.”

Did our sausages pass the taste test?

Forget selling ice to eskimos, try serving currywurst to the Germans. Having ‘helped’ make sausages, I wanted to check out one of the 17 staff restaurants in the Wolfsburg factory where they were sold. Instead, I was put to work in one.

My task was to serve currywurst and ketchup mit pommes in a restaurant in the heart of Wolfsburg. To real employees. At lunchtime. 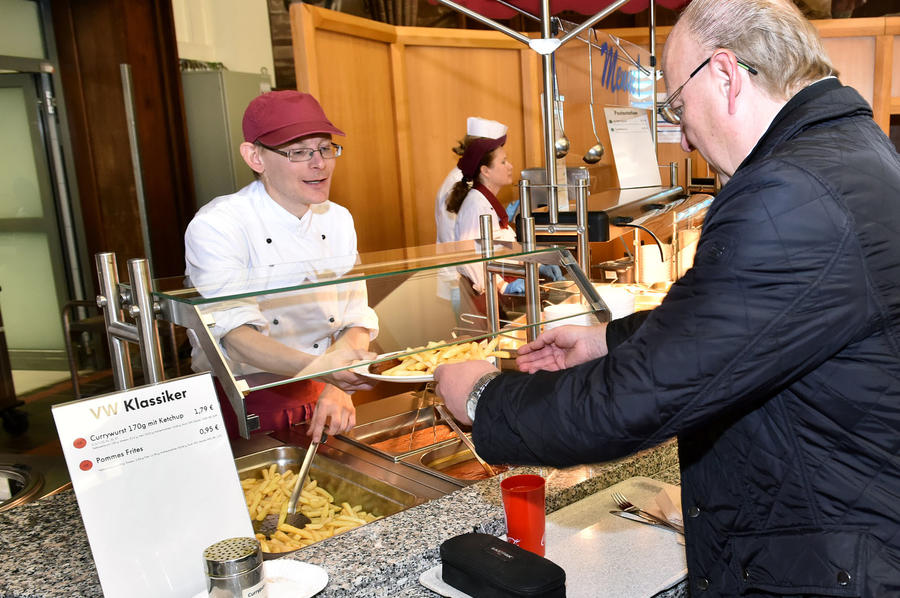 The VW canteens serve a wide variety of food: there’s a low-calorie healthy range, and around 30% of the food sold is vegetarian. But hungry factory workers can’t resist currywurst. So the pressure was on: mess this up and the workers on the nearby Tiguan parts production line could be late back to their posts – or even go hungry. A uniform was donned and instructions were given. Pick up plate. First the wurst. Then ketchup, ladled back and forth, coating the sausage. Then chips. And don’t drop it.

It was tough: not only did the currywurst barely fit on the plate, but it had a propensity to roll.

My German being nicht sehr gut didn’t help either. In fact, it nearly caused considerable upset when it came to the ketchup. Volkswagen employees love their ketchup, as highlighted earlier this year when long-time supplier Mondelez stopped making it. The car firm was forced to find a new supplier, working with Develey to produce a new sauce as close as possible to the original – but not close enough for the factory staff. The recipe has been hastily re-engineered since. 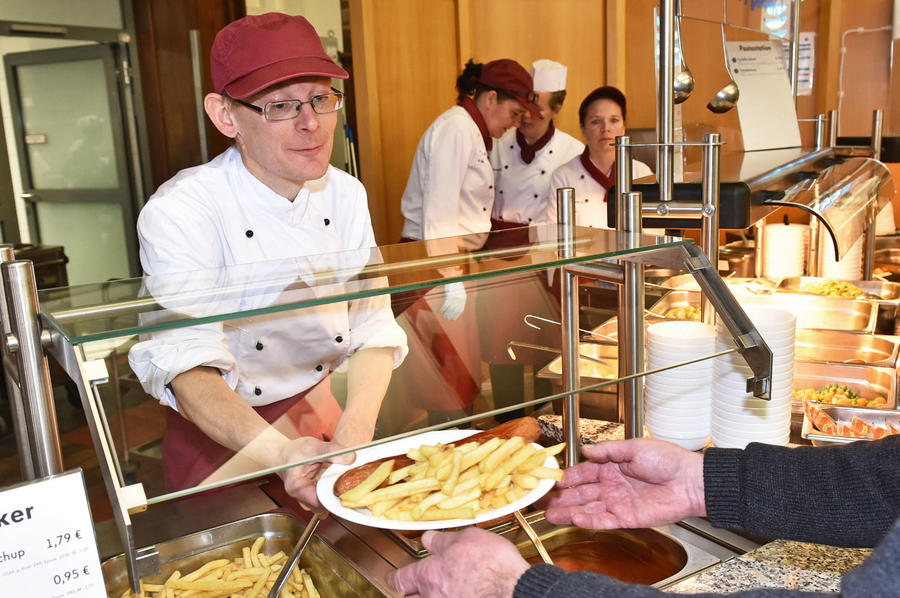 So when I offered customers ketchup and they replied “ein bisschen mehr”, I should have realised they didn’t really mean ‘just a bit’ but ‘a lot more’. So I gave them half a ladle, when they really wanted two scoops – ideally more.

Still, the mistake was rectified, international relations weren’t hurt and VW’s staff were able to resume Tiguan production full of ketchup-slathered currywurst. I was even offered a job, which I politely declined.

The unlikeliest products ever made by car makers

The grand tour: which car factories you should visit​

Fascinating stuff, I wonder what the emissions after eating too many curryworst would be though :-)

Two articles are a bit to much, but I still enjoyed it

I literally finished the slideshow in the second article, just to find myself reading this extra piece of journalism :))) I don't know what I enjoyed more, the position you were in or the use of German within the article. Whatever it is, you guys need more refreshing articles like this, I can bet you that other manufacturers have similar "quirks and features" within their production line. Rimac, as an example, serves only vegan/vegetarian food I think.

What an interesting article.

Well you can find that answer in the other comments. What struck me is how VW are looking after their workers, but here in the UK all we can do is mock the idea. What we did was screw the employees - just look at 'Made in Dagenham' for an example of that - the result was strike after strike.

Perhaps our industry would be in a better state too if we'd paid more attention to the the people who actually build the product - all we did was view them with contempt.

Its all very well publicising

Its all very well publicising the fact that you produce sausages to eat in your staff canteens, but I don't think VW management show any consideration for things that really matter to their employees, ie their jobs. The constant obsession with being number one results in repeated short cut engineering decisions such as the defeat device (and previously, underdeveloped DSG and twin-charger engine), with consequent implications for job numbers, and VW customers. VW management said they wouldn't do this any more after they were caught out with 'dieselgate', but already they seem to have forgotten they ever said this. Still, they make lovely canteen meals for those that still have a job.