I was about to write that you wouldn’t believe how good the computer-generated animations made by a small company called Realtime are – but the fact is you would. That’s the point of them.

“Good CG is like a good sports referee,” says Paul McSweeney, Realtime’s client services director. “You don’t notice it. You have to believe it straight away.”

Realtime is one of those small companies that keep the big industrial wheels turning, specialists whose name rarely gets attached to finished products because they supply, often confidentially, work that slips seamlessly into somebody else’s. 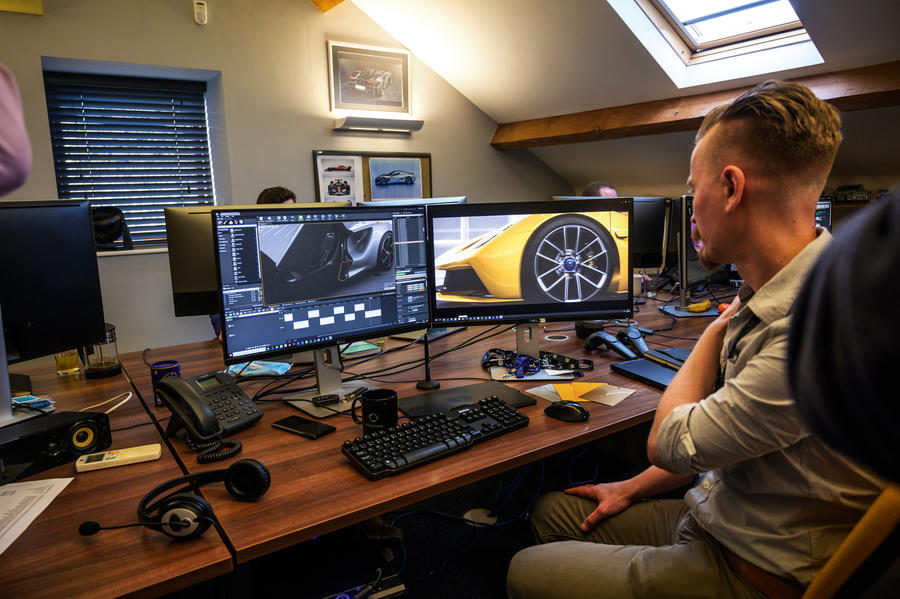 Realtime’s work – CGI animation and visual effects predominantly for TV and film, gaming and the car industry – is so immersive that, having watched it online, I showed up to Realtime’s converted barns, surrounded by farmland, a few miles from Blackpool, and wondered if this could really be where it all happens.

The banks of computers inside – big screens, gentle heat, lots of whirring – tell you it is. This is a place with a lot of processing and brain power.

And if you’re not watching Realtime’s stuff on the BBC’s War of the Worlds or in games your kids know if you don’t (Grid, Everwild, Game of Thrones and Jurassic World franchises), and you happen to have two million quid to drop on a car, Realtime will help Lotus sell you one.

Not that you’d know. Realtime has made the world’s most advanced car configurator but the idea is that a bod from Lotus shows up with a hugely powerful laptop – the sort that runs games with ease – to “a table, office, or wherever high-networth individuals hang out”, says Alan Holroyd, Lotus’s digital marketing manager, and talks them through specifying an Evija electric hypercar. 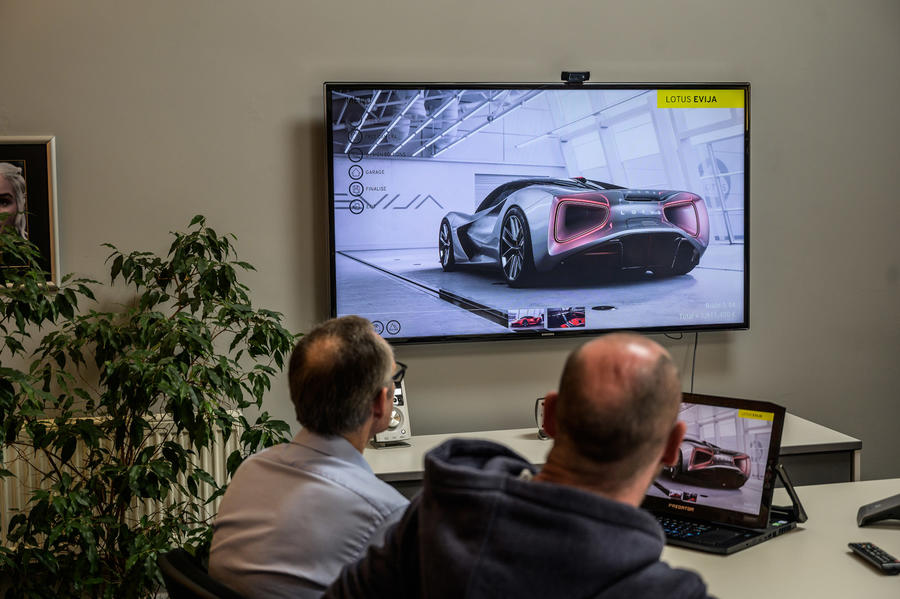 The Evija is not the kind of car Lotus has made before. Not just because of the price, but also because its electric 1973bhp will make it the most powerful production car in the world when builds start in a few months.

Between now and the last of 130 Evijas being constructed, perhaps half a dozen computers running Realtime’s configurator will tour the world. “The car should be configured in a convenient environment, almost definitely not a dealer environment,” says McSweeney.

“It needed to be portable and touchscreen,” agrees Holroyd, “and show the Evija appropriately – and represent the technological leap.”

It looks, on a high-resolution screen in front of me, like it does. The virtual Evija is sitting in a virtual studio, a digital recreation of Lotus’s own design studio in Hethel, Norfolk.

“Why not go behind the secret curtain at Hethel?” says McSweeney. “This is the studio environment. But while every company will invest in a configurator, it shows one environment in most cases. We want to show how different a yellow can look in the desert, or in western Europe, or in a studio, so a customer doesn’t take delivery and say ‘this is not the colour I ordered’ – which does happen.”

A couple of swipes of the screen, then, and the car is sitting next to some palm trees and sand with warm sunshine on it, while a couple more prods later, it’s in the sort of spot Autocar would shoot a car in the autumn – and its body colour looks a bit different each time. 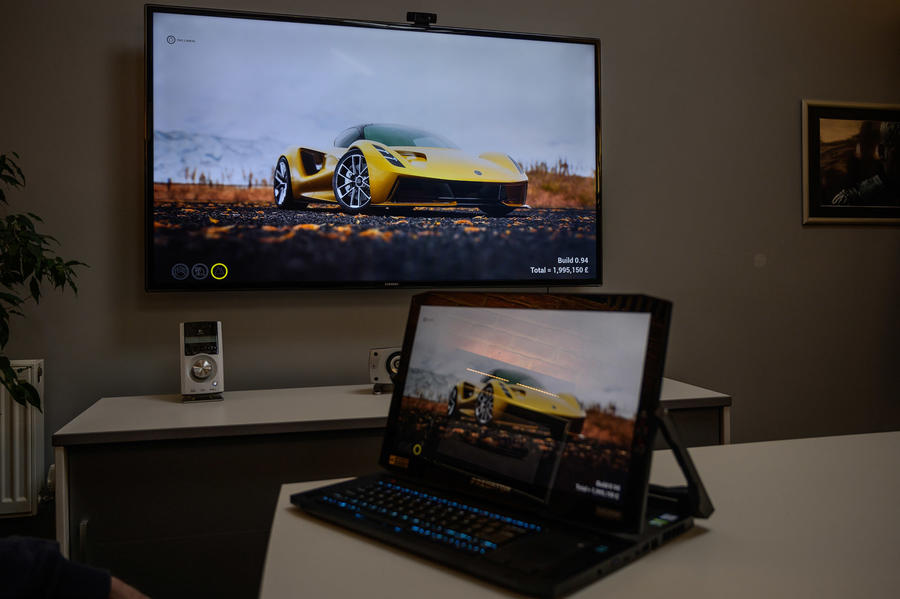 “The change between specifying a car in a studio and taking delivery of it can be quite dramatic,” says Tony Prosser, Realtime’s managing director. So while this stuff is all very fancy and impresses casual browsers like me, the fact is that it helps customers get the precise car they wanted.

So does how comprehensive the configurator is, how much you can personalise on the car, and how easily. “Some configurators are too complicated – and that affects the bottom line of the company,” says McSweeney.

The Evija is a doddle to use. You can open doors, extend wings, look inside and freely roam an environment so complex that even the shoulder of the tyre changes profile depending on whether you’ve chosen Pirelli P Zero or Trofeo rubber. And while most online configurators are pre-programmed 2D renderings, this one renders it in 3D as it goes.

It uses – and this is where, dear reader, I tried to keep up but my limits were being challenged like a 386 processor running Doom (ask your dad) – Epic Games’ Unreal Engine (v4), which looks hyper-realistic to me.

“The beauty of a game engine is that you can make changes very quickly,” says McSweeney. That gives it a use beyond showing it to customers, too: Lotus execs can look at different materials and colours and see if they fly. “It’s tremendous in that respect,” says Holroyd. “You can show anyone in the company, deliver all of the colours and all of the materials quickly. In a way, it competes with the live-action photo shoot.”

Next to me, a photographer shuffles nervously. 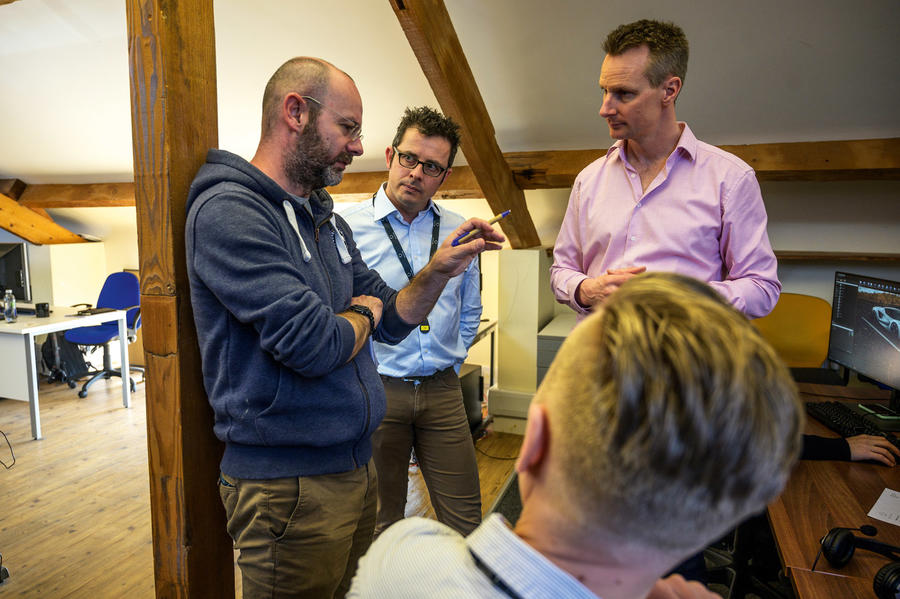 Well. Where do you begin? “Where I might start is with some design editions,” says Alan Holroyd. Lotus, like Aston Martin and others, has a few base ideas to get people’s creative juices going.

There are general themes such as Origin, Launch, Heritage, Formula, Cup Yellow and Neon, or designs with dual-colour highlights that replicate some of Lotus’s famous racing colours, and some it would rather you didn’t see yet.

I go with yellow, subtle inside, with discreet wheel and brake caliper colour. Those and more can be changed – and little break-out boxes let customers write specific bespoke instructions, too. To be honest, I’d still be there now.

That took me back to my student house days!

the question is why?

They are all sold anyway, and I am fairly sure, someone committing that amount of money to a new unproven vehicle, is not sat at home on a laptop casually looking over an online configurator..