BACK TO ALL NEWS
Currently reading: Suzuki at 100: Is this the most fun car, bike and boat maker?
UP NEXT
True blue: Ford Sierra RS Cosworth vs Mustang Mach-E

Suzuki at 100: Is this the most fun car, bike and boat maker?

Our man cashed in his invite to the belated 100th birthday party for the company that Michio Suzuki founded in Hamamatsu, Japan, in 1920
Share
Open gallery
Close
Share story

The family of one of my school friends owned a couple of Honda motorcycle dealerships so a weekend at their house was always a treat because there were trail bikes or stripped-down Honda Cubs to play with. But it’s the cars I remember.

His dad had a BMW Batmobile (almost new back then) and his mum had a Suzuki SC100 Whizzkid. Not surprisingly, it was the CSL that I remember best. And if I did ever go in the little Suzuki, I’ve forgotten.

The memory is about to be triggered because among the heritage vehicles Suzuki has brought to this centenary event is a very tidy 1982 SC100 GX. From the last year of production, it features a 47bhp 970cc four-cylinder engine mounted in the back of the car and driving through a four-speed gearbox. The engine produced such a rearward weight bias that Suzuki added ballast behind the front bumper.

We’re heading north from Cardiff into the hills with the Whizzkid, plus an Ignis and Swift Sport, both brand new. The Swift Sport is a nice little warm hatch but not as captivating or fun to drive as its non-turbocharged predecessors. That said, I’d rather own it than Mercedes’ ludicrously overpowered 400bhp A45. The Ignis is one of my favourite cars. This one is four-wheel drive, which is a shame because it weighs 940kg whereas the 2WD model tips in at 895kg. That’s remarkable for a four-door car that meets modern crash regulations. Quite how Lotus let the last Elise get so near a tonne I do not understand. Mazda is the only other mainstream car company that understands dieting as well as Suzuki. 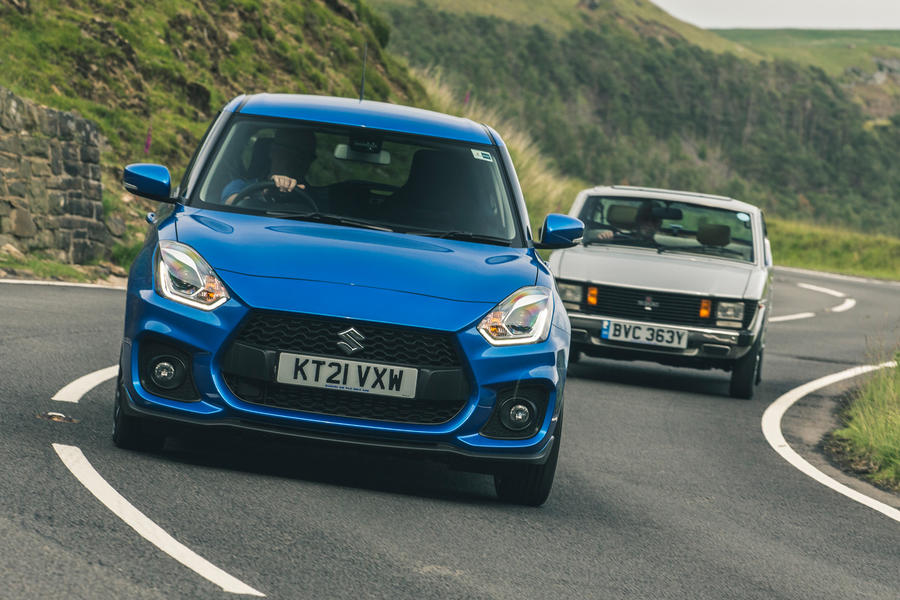 Stupidly, I forgot to brief young Luc Lacey, our photographer, on the performance limitations of old cars before we set off in convoy up into the mountains. He’s not going mad in the Swift Sport, but the SC100 has a top speed of only 87mph and that’s with a tailwind. What you don’t want in the diddy Suzuki is a crosswind, as I suspect that the rear weight bias means a scary lack of straight-line stability in blustery conditions.

A friend who owned one described the Whizzkid as being like a Porsche 911 to drive but with no performance. Actually, it reminds me of the Skoda Rapid: light, slightly skittish front end and light steering through which you can feel everything that’s happening with the front wheels and tyres. Up in the hills and on country lanes, the SC100 is a delight. It’s so small that you have about twice as much road to play with as other drivers and its modest horsepower means that you are always planning ahead and conserving momentum. The brakes aren’t brilliant but it doesn’t feel as though the pedal is suddenly going to go to the floor. The handling is tidy despite the layout but there are double wishbones and coil springs at each corner.

It’s a shame that Suzuki hasn’t brought a Cappuccino to this event. Like the SC100, the little roadster was another flash of brilliance from a company that always produces worthy and commendably competent cars but occasionally comes up with something truly inspired. A modern version of the Frog-eye Sprite, the Cappuccino took up even less road than the SC100. I did many happy miles in Cappuccinos; many at speeds that felt outrageous but were under the national limit. 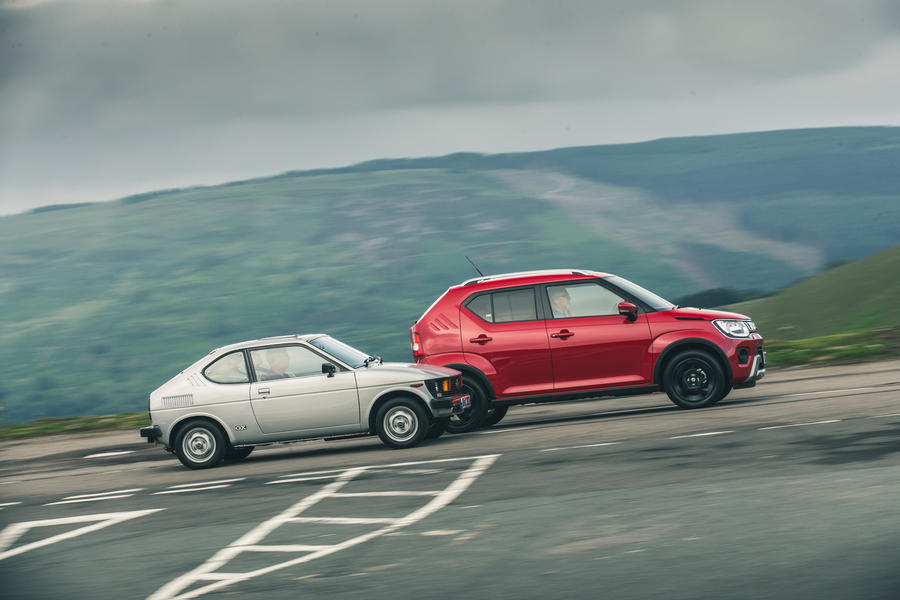 We got this wrong. Yesterday evening, the sun shone as we played around with the Whizzkid, Ignis and Swift Sport in the hills. This morning, it looks like rain is coming and we’re about to go out on a couple of Suzuki motorcycles. Suzuki was often overshadowed in the motorcycle world by Honda, Yamaha and Kawasaki but produced bikes that were just as good, if not better, than rival machines. Honda launched its groundbreaking CB750 in 1969 and Kawasaki followed it a couple of years later with its 900cc Z1. Suzuki’s big bike was the GT750, a water-cooled three-cylinder two-stroke known as the Flying Kettle. Suzuki replaced the Kettle in 1976 with a four-cylinder four-stroke 750 badged as the GS750. The engine was smooth and sweet and the bike handled far better than its rivals.

In the spring of 1985, I was wobbling my way around London’s Marble Arch on my MZ 250 en route to another delivery when I was zapped by what to me looked like a race bike. It was my first sighting of Suzuki’s GSX-R750. No other Suzuki has been such a game-changer or gained such a reputation and cult following. The ‘Gixxer’ was the bike that started the whole race-replica movement.

Suzuki has brought a GSX-R750 from its heritage collection, blue and white just like the one I saw 36 years ago in London. It’s an F model from the first year of production. While car makers traditionally give a car a facelift halfway through its life, usually just a cosmetic tweak, bike firms make changes to the machines each year, often substantial. The1986 GSX-R750 G, for example, had an inch-longer swing arm to improve handling. 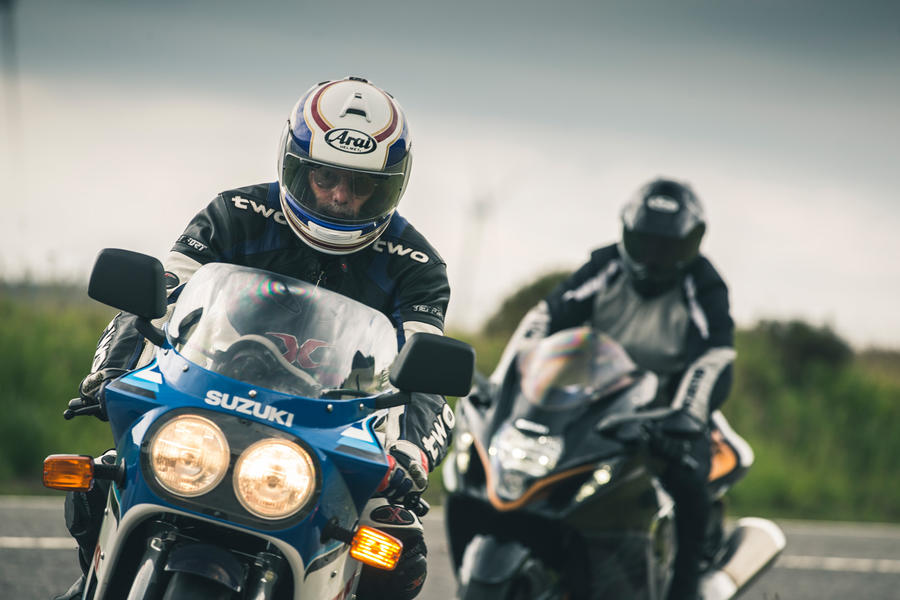 Weight saving is arguably even more important on a bike than a car and Suzuki used air/oil cooling on the GSX-R750 to save the weight of water, pump and radiator. The bike feels light and very compact. Ahead of me is Ian Wilson, an ex-racer who looks after Suzuki’s two-wheeled heritage collection. Wilson is on a 2021 Hayabusa. The ’Busa is another Suzuki game-changer. Honda introduced a bike in 1996 called the CBR1100XX Super Blackbird, a super-sports tourer with a top speed close to 180mph. Hayabusa is Japanese for peregrine falcon, a bird of prey that is not only very fast (over 200mph in a dive) but also preys on blackbirds.

As with cars, an unbridled pursuit of horsepower and performance has infected the bike world. So, too, has overcomplication. The latest Hayabusa has a mind-boggling array of modes and settings for traction control and wheelie prevention and it will smash the national speed limit in first gear. It’s a beautiful piece of engineering and effortless to ride very quickly but it’s a pointless machine. This GSX-R750, however, has a balance of competence and performance that still offers challenge and reward. I don’t really like old bikes but I’m impressed with how good this 1985 machine feels.

We meet at Walter’s Arena, an off-road facility used by rally teams for testing, for a group photograph of all the Suzukis we’ve been playing with over the past couple of days. While Lacey arranges his lights and moves the machines around, I slope off for a drive in another car. Who would have imagined that a pint-sized 4x4 would become a cult car? Word is that when Suzuki launched the Jimny, there were queues around the block at Tokyo dealerships and a huge waiting list. Have a look at the prices being asked for second-hand Jimnys in the UK: some are over original list.

Unfortunately, Suzuki fitted the car with an engine that couldn’t meet upcoming EU emissions regs. The company’s canny solution was to remove the rear seats and sell the car as a commercial vehicle. Small, light and simple works just as well off road as on and 10 minutes’ mucking around in the Jimny, climbing banks and splashing through puddles, is worth an hour in a new Land Rover Defender.

I’ve never owned a Suzuki car but I have had at least four bikes. My first road bike was a TS125 trail bike, taken out onto the public road at 5.30am on my 17th birthday. And crashed three days later. The Goodwin family doesn’t need a small four-door hatchback but I could almost buy an Ignis as a matter of principle. To make a statement, if you like.

If Suzuki sticks to its principles of simplicity, light weight and beguiling design, its next 100 years could be even more productive. It will take a company with Suzuki’s philosophy to resist the temptation to create overweight and overpowered vehicles as we move into the electric era.

Toys for the buoys

I’ve had a lifelong love of outboard motors. Like many fetishes, it’s hard to explain. They just look cool and I love their compactness and how much hardware is neatly concealed within their covers. Gordon Murray is a fellow enthusiast so I’m in good company. He’d understand why I spent half an hour gazing at the Suzuki outboard on a stand in the hotel reception. It’s a monstrous thing, all 4.4 litres of V6 four-stroke power. In the outboard world, they brazenly display horsepower numbers on their engines. This Suzuki motor is a 350. It’s also, at £30,900, more expensive than most of the cars Suzuki makes. 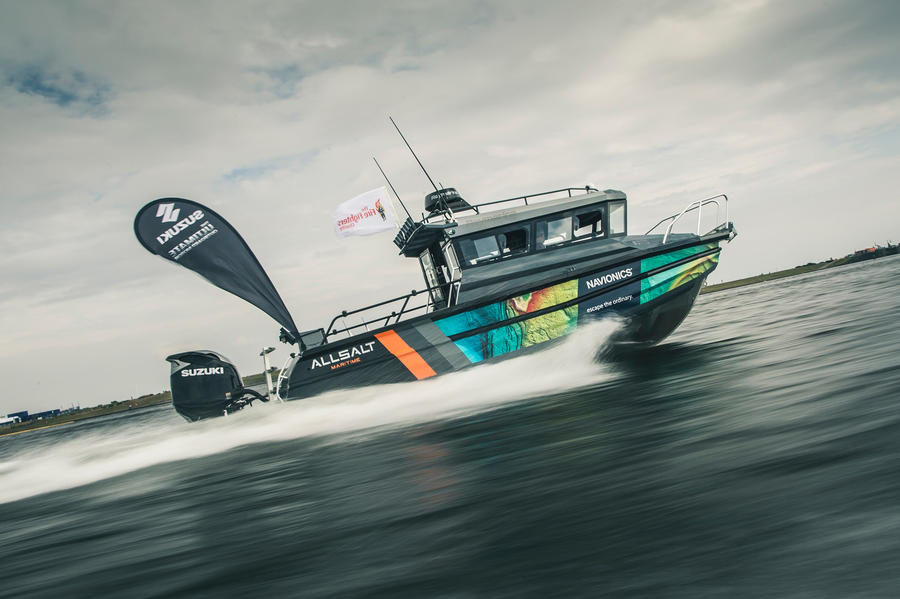 The term ‘brand ambassador’ didn’t exist in the 1970s but could there have been a better one than Barry Sheene? His marketing power wasn’t strong enough to make me wear Brut 33 but it made me want to own Suzuki bikes. One of his old race bikes is in the hotel reception just along from the beast of an outboard (see separate story, left). Without any hesitation, I correctly identify it as an XR14, the works version of the RG500, from Sheene’s first championship year, 1976.

Ian Wilson, my riding buddy on the Hayabusa and GSX-R750, has ridden it. “Terrible. There’s barely any power under 9000rpm and the brakes feel like the pads are made from wood,” he says. “It made me realise how heroic the guys were who rode these bikes in GPs.”

We lost Sheene to cancer in 2003. I’d watched him race dozens of times, latterly at the Goodwood Revival. Just to sit on his old bike, in a hotel reception in Cardiff Docks, is a thrill and brings back many memories. 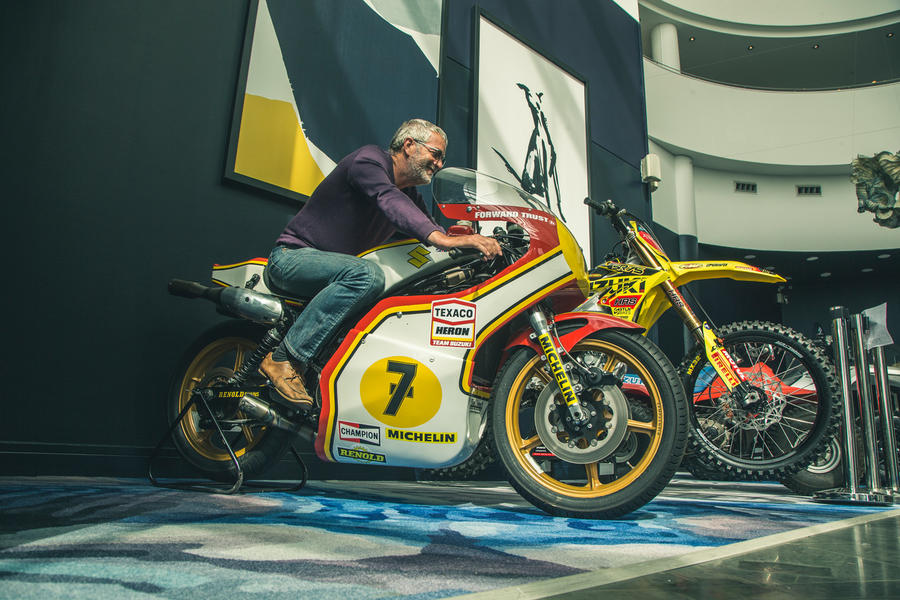 Why the Suzuki Ignis is the ultimate everyday hero

Log in or register to post comments
FastRenaultFan 26 July 2021
The parents nearly bought a Baleno way back in 1997 thankfully they did not and got a Megane instead, a far better, far more sophisticated and much safer car then a 97 Baleno ever was.
Still the 3 door Baleno was nice but the dashs on them were horrible cheap plasticky things.

The Jimmy is a great little thing. Such a pity they do not sell the current one here in Irelsnx but I can see some been imported from Japan in the future. A pity
If Brexit had not happened they could have been bought from Britain or ever Northern Ireland new or 2nd hand but Japan is where a lot of second hand cars in our market are coming from now. Britain's loss Japan's gain.

Had their bikes, both on and off road, had their cars and without a shadow of a doubt the most under rated company there is in the motor trade.

Problem is they seem to be getting weaker.

Nice piece. Sadly I fear that, in the UK at least, Suzuki are increasingly going to be just sellers of re-badged Toyotas.