BACK TO ALL NEWS
Currently reading: Why the Suzuki Ignis is the ultimate everyday hero
UP NEXT
Rodin FZero: V10 weapon aims to be world's fastest car

Why the Suzuki Ignis is the ultimate everyday hero

An unassuming multi-purpose city car that’s greater than the sum of its parts. We reluctantly hand back the keys after three months behind the wheel
Open gallery
Close

The Suzuki Ignis slipped into our lives in a quiet, friendly sort of way late last year. I can’t remember the details of its arrival except that a helpful driver dropped it off in our locked-down Gloucestershire driveway one happy afternoon early last November.

It was the first fruit of a request that I had put to Suzuki’s people to try a few of their cars (it pays to stay up to date in our racket). We started with the slightly off-the-wall SZ5 4x4, because I’ve always liked affordable cars that do a lot with a little and especially stand apart from the mainstream rather than making up the numbers in some amorphous ‘sector’.

Up to that time, I had spent only an hour or two in an Ignis, but I already had an oddly close relationship with the car. When the Ignis was unveiled at the 2015 Tokyo motor show, I was immediately smitten by its shape, compactness and unique packaging (I remember sitting in the back on the show stand, amazed at the space). And you could opt for four-wheel drive for not much more than the price of a Porsche cigar lighter. The record will show that I chose the Ignis as my ‘car of the Tokyo show’ way back then.

About that time, Suzuki was just ending an entertaining public spat with the Volkswagen Group over what had started, three or four years earlier, as a classic technical partnership. If you read between the lines, it seemed Volkswagen had presumptuously assumed that it would be the senior partner in the relationship, free to dispense largesse on its own terms. Suzuki hadn’t enjoyed the Germans’ tone or what they were offering.

Feisty Suzuki patriarch Osamu Suzuki made it plain that “our engineers have lost the desire to co-operate with Volkswagen”. He demanded freedom from “the ball and chain,” which, after some more public sparring, was granted. I admired Suzuki for its independence and fighting spirit, which seemed to be reflected in the cars, not least the new Ignis.

From the first day of its arrival, the Ignis became extremely useful. We’ve nearly always had a surplus of cars in our household, but pretty soon there might as well have been a car-count of one. We have a preference for compact cars, and the 3.7-metre Ignis is handily shorter and narrower than the current Ford Fiesta. We are fairly big people, too, so the fact that my 6ft 3in second son could comfortably fit in the back – and without demanding space from me as the driver – seemed amazing. The wide-opening doors and high hip-point also made this the perfect car for taking granny to hospital for her first Covid jab: she could get easily in and be comfortable, yet the Suzuki was small enough to joust successfully with the other cars in the crowded hospital car park. 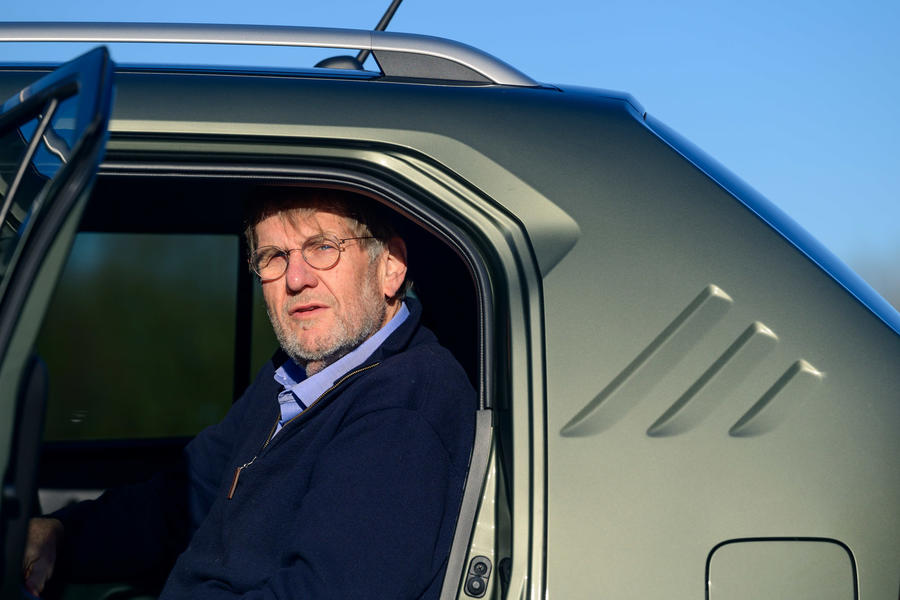 Our family has a love of tall cars for another, entirely different reason: we enjoy driving as much for scenery as the enjoyment of the controls and motion. And the best way to enjoy our south Cotswolds surroundings, even places you know better than your own name, is from a driving position that allows you to see over stone walls. The Suzuki instantly proved perfect for that. I tried to think of other ultra-compact cars with high seating, and besides the Fiat Panda Cross and our ancient Mk1 Citroën Berlingo (which isn’t as small as this), there weren’t any.

Of course, the Ignis is a cute car to drive. The tiny footprint means you take a line through every bend, which is novel, enjoyable and a bit old-school. The lightness means you could chuck it about without fearing any heavy-car, slow-recovery consequences – although none are likely anyway, because it’s a neat, neutral handler with plenty of grip. Despite the high seating, the Ignis loves roundabouts and contains its body roll well. I never really felt the limit, but it out-handled some pretty big-note cars even so.

The engine is quite puny – just 80bhp from 1.2 litres – so the assisting integrated starter-generator has an important role. But even so, the Ignis is far from quick. If you want to go briskly, you must regularly garner performance from the other side of 5000rpm (redline is 6500rpm) and use the sweet-shifting five-speed manual gearbox all the time. It’s fun, but you’ve still got to understand that you will regularly be shut down by impatient people in premium German saloons as soon as the road goes straight for more than 50 yards.

Suzuki calls the Ignis a city car, but I ended up doing something like 4500 miles in three months, many on enjoyable B-roads taken as briskly as was comfortable for the car, and quite a few on motorways. The ride is decent, too: not too firm and but well damped, although hardly sophisticated. 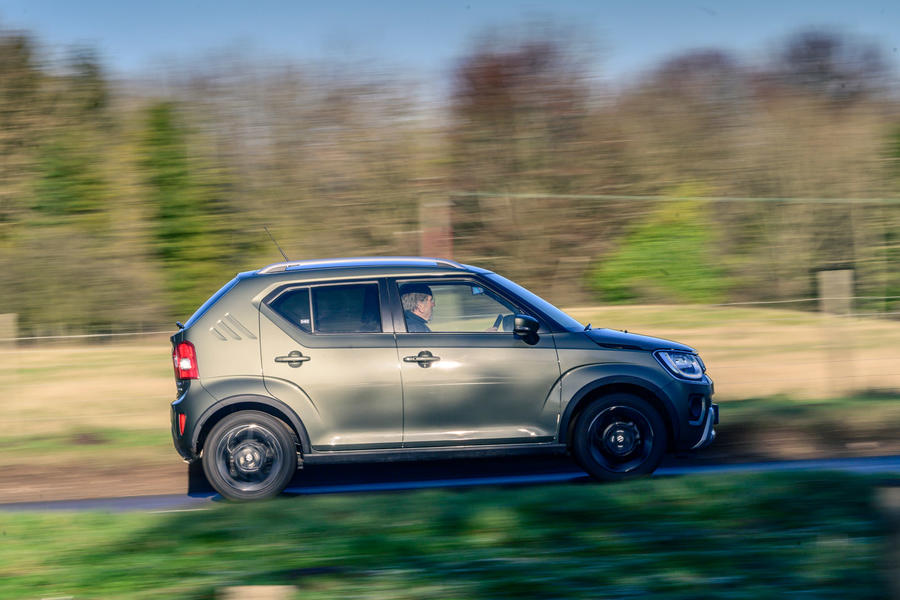 My most notable long haul was a 400-mile Cotswolds-to-Cornwall return dash to see Neil Yates, the bloke who is cooking up EV chassis systems for low-volume applications in his lair beside Newquay Airport. I set off around 6am, cruised at empty-motorway speeds and returned 50mpg (my own measurement, not that of the trip computer, which fibs a bit). When I stopped for fuel or comfort, the embarrassment, if that’s the right word, was never seeming to need to add more than 15-18 litres to a tank that holds just 30 to start with but which still allows a cruising range of 280-odd miles. The seats are pretty flat, but their sit-up-and-beg positioning makes them as comfortable as much pricier cars for up to three hours at a time.

My family has specialised in road trips to Cornwall over the years, and it’s a route we know well. So it was worth noting that this city car, with its small tank and modest cruising speed, seemed to take no more than a handful of minutes (say five to 10) more than we’re used to expending on this journey in cars costing up to 10 times as much.

Two particular disappointments emerged on this journey in a myriad of strong features. First, there’s enough road noise at higher speeds to require you to turn a talk-radio station up pretty high and to remove any chance of hearing the detail if music is your preference. That’s wearing. Second, I would have killed for a classic volume control knob beside the all-purpose touchscreen that operates almost everything. There is an up-down volume switch on the steering wheel, but it’s fiddly and not nice to use.

Finally, as we moved into the snow season and the first dustings began to scatter local roads, the classic recipe of four-wheel drive, short overhangs and generous ground clearance began to look very relevant – and the only rival I could think of again was the Panda Cross, a thoroughly beguiling but ageing car whose none-too-frugal Twinair engine seems earmarked for the chop. Soon it snowed properly, whereupon I repaired to the (deserted) local railway car park like an obsessed 17-year-old to investigate wheel slip on virgin snow. 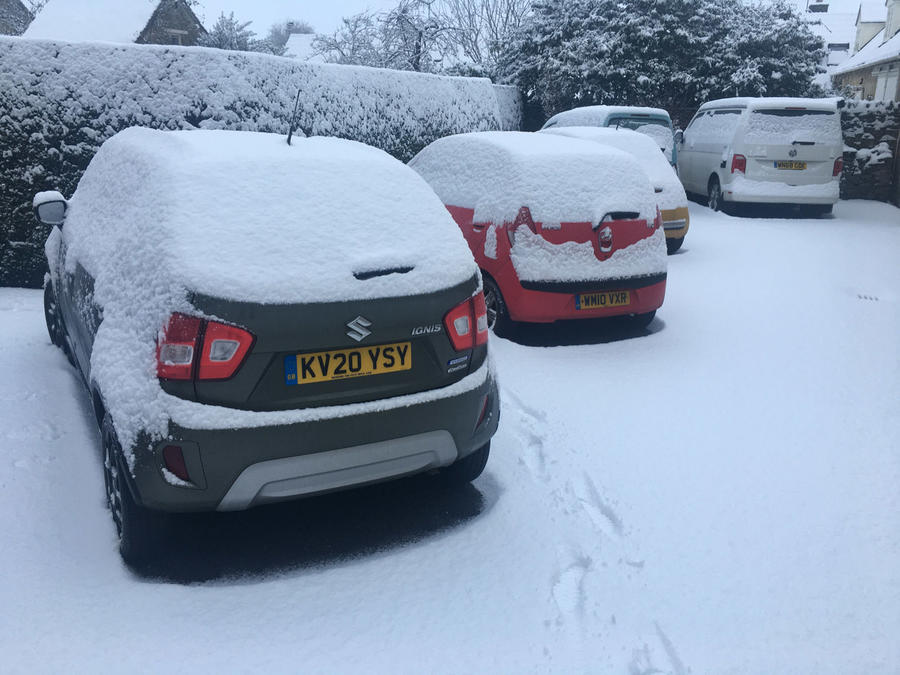 That was when I discovered the Ignis’s most serious foible. The car has pretty good road traction from standstill even on treacherous packed snow, aided as much by the remarkable fact that it weighs just over 940kg. The front-to-rear four-wheel drive is automatic and permanent, but there’s a separate Allgrip switch for really bad conditions that alerts the built-in traction control to provide further help at up to 18mph. A separate hill descent control system works the same way.

However, the big fault in these conditions concerns the Ignis’s standard, skinny 175/60 R16 ‘economy’ tyres, which simply don’t stop the car nearly as well as the Pirelli all-weather rubber we’ve used for all the years on the Berlingo. That’s a big shame, and it could be safer. The anti-lock braking helps, of course, but even in our street, the Ignis demonstrated a reluctance to wash off speed that our own old Citroën could plainly beat. Were I a Suzuki dealer, I would offer big-brand all-weather tyres for this car from delivery; and were I a customer, I would bite his hand off.

Three weeks have elapsed since Suzuki took the Ignis away. It’s rare that I look forward to a test car’s collection, but I also forget them pretty fast. It’s a ‘move on’ business we’re in, but not so with this car. A couple of days after the collection, the Steering Committee was still regretfully complaining that “they’ve taken our little car,” even though there were three remaining home-owned options visible from the kitchen window. 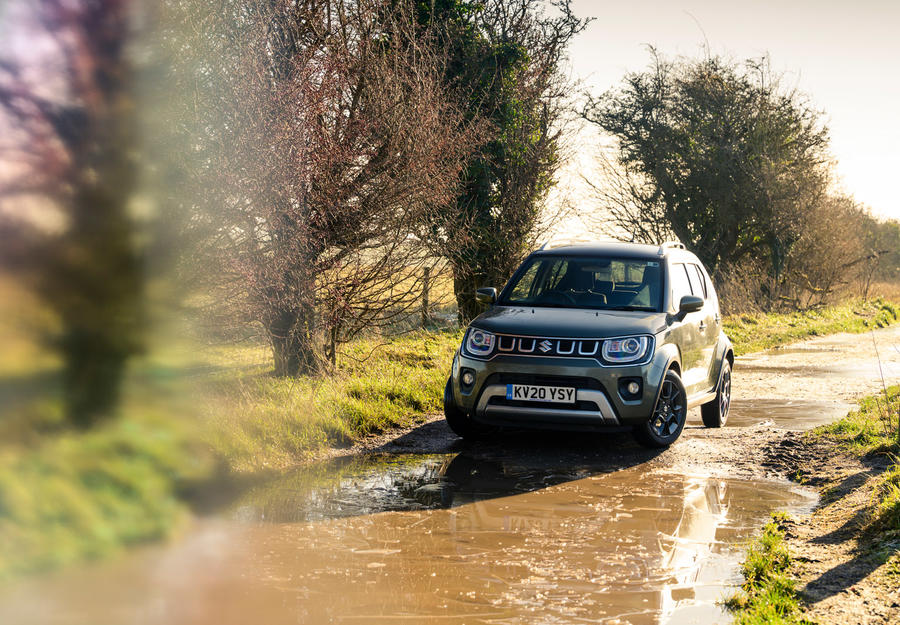 I’ve banged on so much over the years about wanting to own the cars I’ve enjoyed that it has become a cliché. So I’m not going to do it this time. Let’s just say that for us, the Ignis was far greater than the sum of its parts. It’s one of those cars you grab with ease, even fall into, because it fits any driver, passenger or parking space and happily attacks any chore. Bottom line: we continue to miss it – and there’s a Suzuki dealer in our town.

There is a black spot here. What car? magazine rates the Suzuki Ignis - very surprisingly - least reliable small car, together with Dacia Sandero.

Seems churlish to blame the car for dealer's tire choice - where I live I happen to own separate winter tires, my car would be quite a fright on summer tires throughout winter, while it's completely secure on all winter tires. Tires are a key variable, if you live where slippery conditions are common during winter time. Where I live, winter tires simply would be life threatening dangerous in winter -- lot of hills, going down hill on summer tires during one of the frost rain conditions that periodically happen, would be recipe for serious fright person would be lucky to end off the road without real injury to anything but the car.

Quite like the idea of a sporty Ignis, eg a yellow Ignis WRC homage. Shame we don't see other value oriented RHD Maruti Suzuki models such as the now wider Wagon R and XL6.