BACK TO ALL NEWS
Currently reading: Rolling sixes: Porsche Cayman GTS 4.0 vs hardcore GT4
UP NEXT
Mazda to launch own version of new Toyota Yaris by 2023

We all know that there are Porsches and then there are Porsches. One lot are SUVs, big saloons and electric powerhouses, most (but not all) of which we greatly admire; the others are sports cars to which we have far more emotional connection. But even the sports cars sub-divide into those designed by Porsche itself and those that are the work of its Weissach-based Motorsport department. You will know their names: GT2, GT3 and their Mr Hyde RS alter-egos, GT4 and Spyder. And here’s the thing: however good a standard 911 or 718 may be, it’s always a given that, when it comes to the ultimate driving experience, none can come close to a Motorsport car. Except one just did.

Porsche’s decision to remove the unworthy turbocharged 2.5-litre flat four from the engine bay of the Cayman GTS and replace it with essentially the same 4.0-litre flat six used by the Cayman GT4 has led some to speculate that, on balance and once their £11,000 price differential is taken into account, the GTS might just be – whisper it – the better bet. I know such talk causes palpitations down Weissach way. The reason Motorsport Porsches are so damn good is because they don’t think of Aston Martin, Audi, BMW or Mercedes in terms of opposition; they think of other Porsches.

So, can a stock standard Porsche really put one over a Motorsport car? It’s what we’re here to discover. Some may consider the look of the GT4 and that coveted name are worth the additional money all by themselves, and that before you consider it has GT3 front suspension, inverted dampers at the rear and GT3 control arms. The aero kit not only looks the part but provides modest amounts of extra downforce, too. Don’t be too distracted by our yellow GT4’s racy bucket seats, roll-cage and carbon-ceramic brakes, because these are all among the options that bring its list price to £94,506. The green GTS’s extras are fewer and have little effect on its driving experience. At £74,343, it’s fully £20,000 cheaper than the GT4 as presented here. 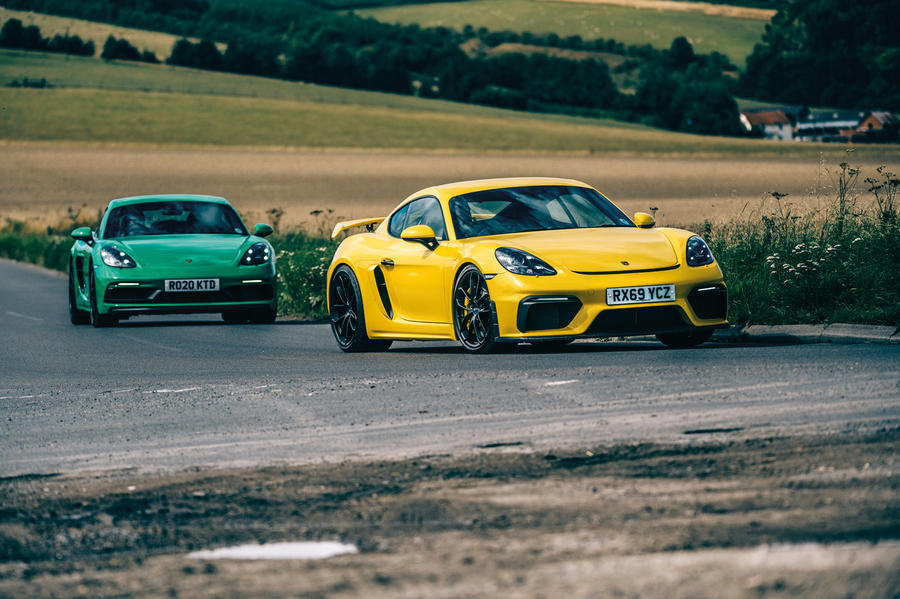 But driving it to meet the GT4, it seemed to me the Motorsport car would need to work hard to establish clear conceptual air between itself and its stablemate, not least because when I thought of what could be reasonably improved on the GTS, I drew a blank. As it does in the GT4, the 4.0-litre unit addresses all issues raised by previous engines – both the lack of torque of the earlier normally aspirated ones and the compromised sound and throttle response of the later four-cylinder turbo ones. It even almost makes sense of the long-legged gear ratios. I knew the GT4 would be no worse in this regard, but being as good as the cheaper car wouldn’t be good enough; it needed to find something else.

I also thought it possible that the GT4 could actually lose ground on the public road. Our chosen route is well known to us and used because it’s properly challenging, with broken surfaces, odd cambers and corners with inconsistent radii. What you need here is compliance and, even in the GTS, I found myself stabbing the damper button to make sure the car was as soft as could be. The GT4, on its wider and stickier Michelin Pilot Sport Cup 2 tyres, would doubtless generate more grip, despite being a touch heavier (blame that aero kit), but who needs that much adhesion on a dry road? And in the wet, I’m sure you could press on in the GTS when you would feel far more inclined to start holding back in the GT4.

I loved the GTS and the way it tackled those surfaces, somehow finding the perfect balance: not so stiff that it was deflected by secondary imperfections yet sufficiently controlled to maintain exemplary primary ride control. It does wonders for your confidence. I could have driven it all day and, were there not a shockingly yellow GT4 to try as well, would have done.

Settling into the GT4, you notice first that those optional buckets are brilliant, but the engine sounds pretty much the same, while the steering is curiously a touch lighter as you come off-centre, despite the stickier, fractionally wider front tyres. It’s not better or worse; I just thought I should point it out. The ride, however, is inferior and, with it being more stiffly sprung in both spring rate and sidewall, it would be a surprise were it not. On this difficult road, there’s a restlessness to it that you just don’t get in the GTS. It feels a little more connected to the surface but not enough to offset what it loses in ride compliancy for those wanting a thrilling yet still daily-drivable car. 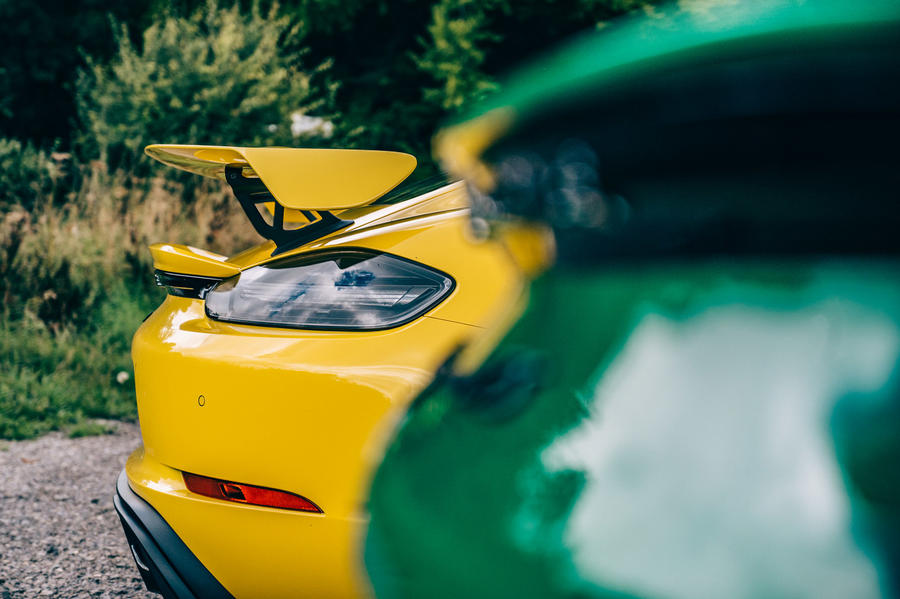 But what if you’re not? What if you simply want the best-driving Porsche available for a five-digit sum? Actually, I might direct you towards the GTS again. It’s so quick, so easy and so reassuring – even on dry roads, let alone wet surfaces to which its tyres would be far better suited than those of the GT4 – that it would probably be the better car for most people most of the time.

Yet there’s something else here. No GT Porsche is for most people. Most people who buy a Porsche buy an SUV. And for the right person – the person who really likes to put a car through its paces and who ranks the resulting experience above all – the GT4 suddenly comes into its own. Drive both cars hard and you’ll find the GT4 changes direction better, has more traction (although the GTS is hardly deficient), far better brake feel on its optional discs (which surprised me, because I always prefer the feel of iron rotors on 911s) and, when you’re really pressing on, where the feel for the road is all, it’s just more of what you want a true driver’s car to be.

Bear in mind, too, that we took neither car to a track, an environment in which the GT4’s small on-road dynamic advantage over the GTS would likely only widen further.

At which point I should tell you that if you want a fast Cayman for almost exclusively road use or as any kind of regular transport, the GTS is the one; but if you’re after a more recreational experience and are planning on going anywhere near a race track, the GT4 is worth every penny of the additional money. 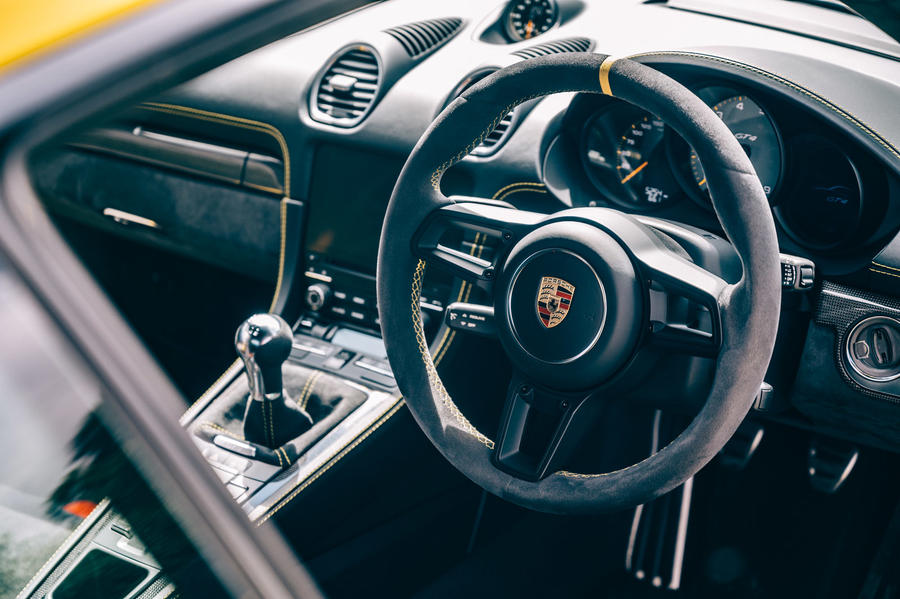 It’s all true: a horses for courses verdict would be entirely justified here and the one I would supply were it not for the fact I detest such lily-livered, mealy-mouthed, cop-out conclusions. You tuned in to find a winner, and you’re going to get one.

For most of our test day, I genuinely thought it would be the GTS, and I would argue with no one who had driven both and concluded thus. It’s one of the finest mainstream Porsche sports cars there has been. Excluding those with engines behind the rear axle line, it’s the finest, full stop.

By contrast, I don’t believe the GT4 is one of the great Motorsport cars. Moreover, I think the previous (2015) Cayman GT4 is more memorable. But that just shows how great these cars are. Because even far from the best Motorsport Porsche is good enough to get my vote over its finest mainstream opposite number. Just.

Under the skin: Why the straight-six engine is on the way back

I know we are talking about the impossible here, but the GTS with the GT4's wheel and tire combo vs the GT4 would be an interesting comparison. Just curious how much of that grip in the GT4 is just from tires.
Boris9119 10 October 2020

Own a 2016 GT4 so likely biased, but the conclusions seems spot on to me. Nothing at all wrong with a GTS, buy it and you will not regret one day. However if the difference is only 11k I would still go with the GT4 as you are likely to recover some of that price delta at resale.

In the GT4, 1st gear takes you to 52mph, 2nd to 85mph and 3rd to 121mph(!). According to Frank-Steffen Walliser, head of Porsche GT cars, it's because they used an older existing gearbox and changing the gear was not technically possible because they were running out of adjustment space on the shafts.
Boris9119 10 October 2020

Always Been Sceptical About That

Yes I also heard/read that a while back and I have always been sceptical. I cannot help but think it has more to do with maintaining a performance advantage for the 911 and helping keep the cost of the GT4 down. The latter argument somewhat lost now given the gen 2 is approx 18k more than the gen 1 was here in the USA.