BACK TO ALL NEWS
Currently reading: A road trip in Britain's cheapest used car
UP NEXT
New Volkswagen Golf R 20 Years is most powerful production Golf

Can a 22-year-old, £200 Nissan Micra complete a demanding 500-mile road trip - or will it be marooned on the hard shoulder by lunch?
Open gallery
Close
News
by Dan Prosser
6 mins read
Share

Allow me to introduce you to P289 BUX. It’s a 1996 Nissan Micra and, as far as I can tell, it is the cheapest used car in Britain.

We wanted to know just how low you can go when buying a second-hand car; to find out if, for the price of a single monthly payment on a leased Renault Captur, you could buy, outright and with no debt whatsoever, a functioning and serviceable car.

Of course, there’s no way I can verify that claim, but I do think I can make a strong case for my flaky Micra being this country’s cheapest car. We set ourselves some rules, you see, and within those guidelines P289 BUX was by a clear margin the most affordable car I could find.

The first of those rules said the car must be drivable and in need of no immediate work to make it roadworthy. I had to be able to drive it away. That meant nothing listed as ‘spares or repair’, or anything that required attention beyond the very basics, such as air in the tyres and a splash of windscreen washer fluid. 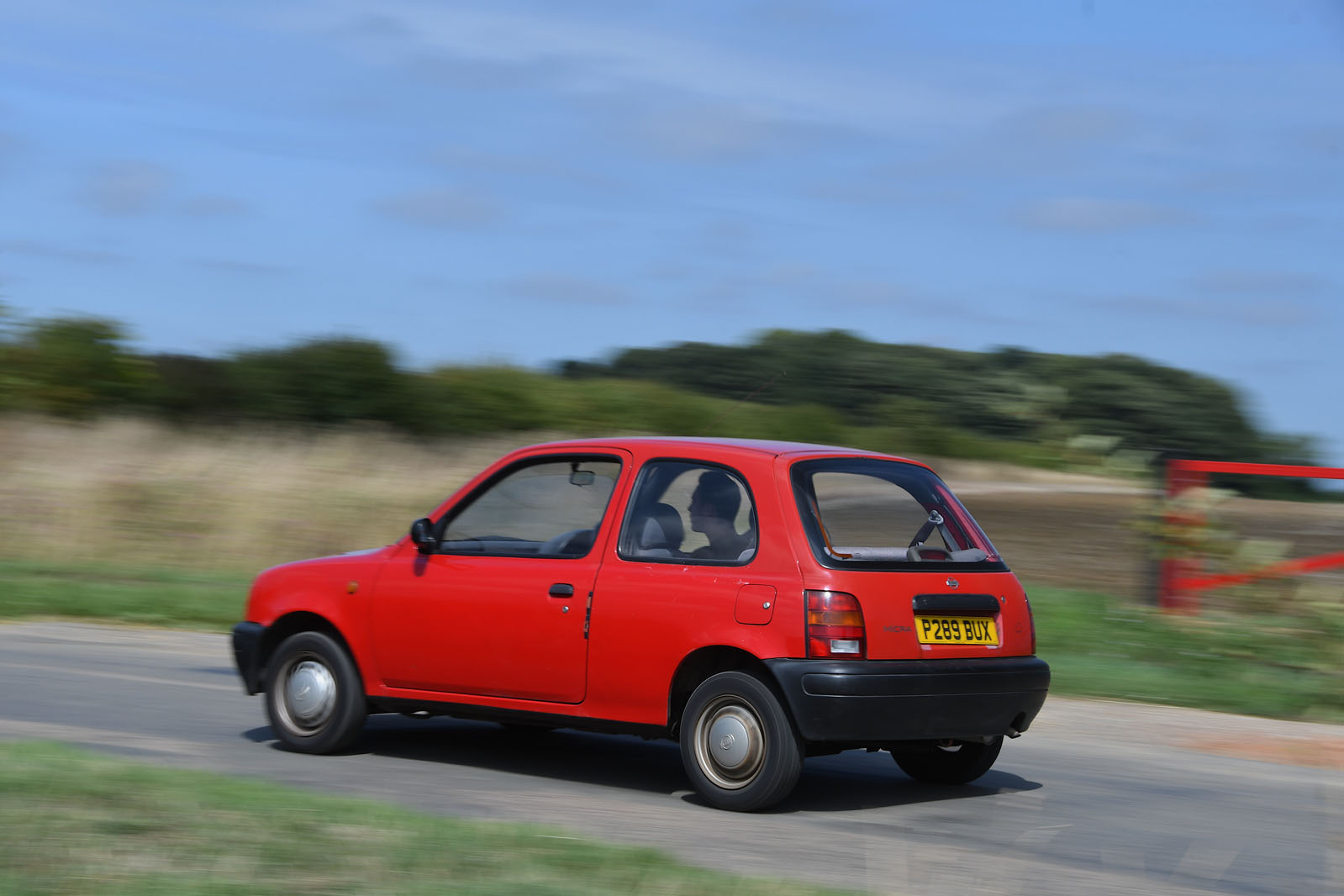 Rule two ties into the first: the car must have at least three months’ MOT. It would be no good buying a cheap old snotter, have its test run the following week and be left with something that required costly remedial work to get it going again.

The third rule said the car in question must be relatively close to home. At this price point, all the way down on the seabed, where it’s murky and the only living creatures use bioluminescence to navigate their way through the mire, every conceivable cost becomes a significant one. If you insist on buying a coffee on the way to the transaction, for instance, you have effectively added a few percentage points to the overall cost of the car. This will not do. Similarly, it would be folly to pick out a car at £150, then spend half that again travelling across the country to collect it.

Finally, says our rulebook, the car must be legitimately for sale via a public forum. Buying your gran’s old Polo for £20 absolutely does not count.

In light of all of the above, then, this Micra – from where I’m sitting, at least - really is the cheapest used car in the country. I spotted the classified ad within an hour or so of it being posted (Gumtree is the place to look for really filthy old sheds) and – would you believe it? – the car was a mere four miles from home. It was listed at £250, which was far too rich for me. I sent a message to the vendor bidding £190, desperate to bag it for something beginning with a one. He simply would not budge below £200. Oh well. Within 12 hours, P289 BUX was mine. 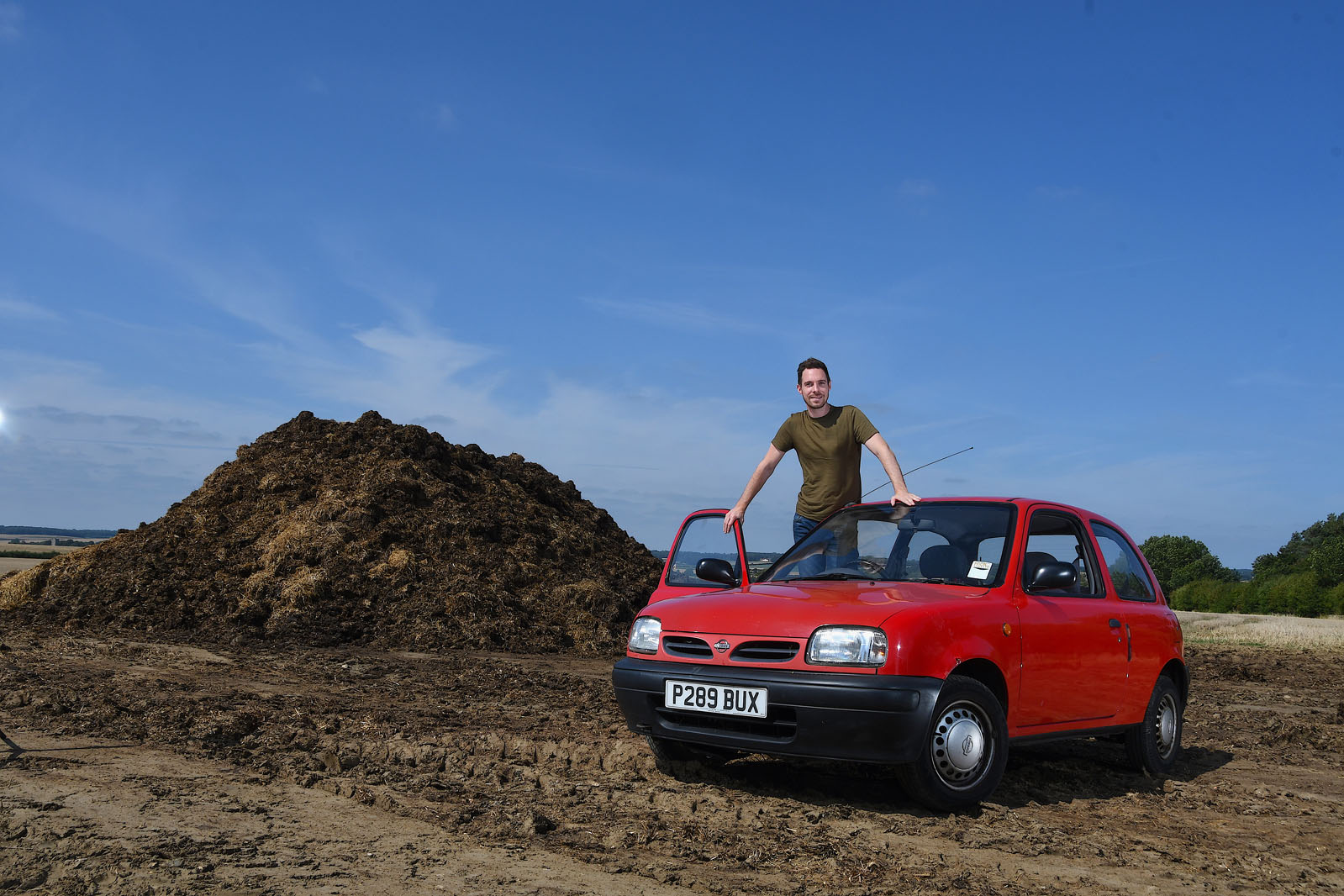 Other costs? I paid £85.25 for six months’ tax and bought a few litres of coolant to top up the reservoir. Let’s call it £300 all in, with insurance on top. Allow me to give you a brief walk-around. Rust is bubbling away here and there, not least near the rear numberplate. There are many scuff and scrape marks on the bumpers. The sills are pretty rotten. The lacquer is coming away quite enthusiastically on each flank, like peeling sunburnt skin. P289 BUX is best viewed from a distance of 20 yards, from where you can’t really spot those flaws but instead appreciate the Micra’s adorable two-bubble shape.

The interior is in remarkable nick, thanks in part to the seats having been covered for the past few years. There’s plenty of dog hair, though, but the previous owner’s Jack Russell – as far as I can tell – must have been a mutt of notable hygiene because the cabin doesn’t smell at all bad. The car had covered precisely 136,000 miles when I collected it. The vendor had owned it for nine years, which was encouraging, and most remarkable of all, it came with 10 months’ MOT.

I could hardly believe my luck. What’s more, my mum used to have a K11 Nissan Micra, so I’d be buying a car very much like the one I was driven to school in. The K11 is an historically important hatchback too. A bit of a game-changer, in fact, and for a long time the darling of driving schools. Today, the K11 is popular with grass-track racers and grassroots rally drivers because it’s known to be tough.

So what to do with it? Clearly I would have to use the car to prove the £200 shed concept, or otherwise. I could either run around in it for a month, or take it on a monster road trip and cover, in a single day, the 500 miles it has averaged every month during its 22 years. 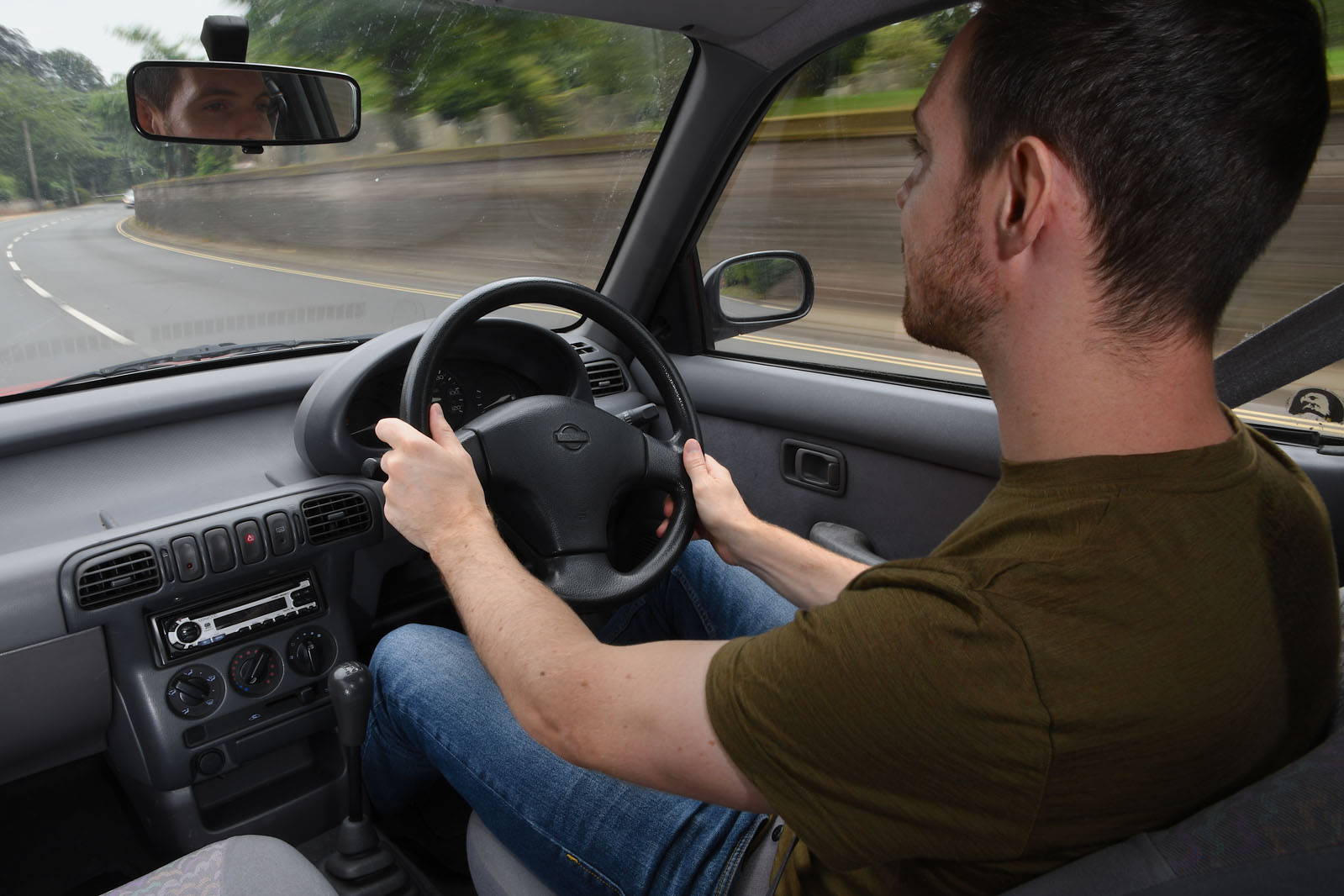 And so, one fine Tuesday morning, I set off from home in Bristol and pointed P289 BUX east along the M4, not at all convinced it would even make it to Heathrow. At Reading, it took £42 in unleaded and in a matter of moments the car’s value rocketed by 20%. Somewhere around Slough, I began to relax. I had started the journey nervous and apprehensive, driving the car with the care and patience a mucky old snotter would surely require. Soon enough, though, we were keeping up with the German saloons in the outside lane and I was treating the Micra no more gently than I would a brand-new car.

We joined the M25 and headed clockwise, eventually peeling off onto the M11. We were on our way to Swaffham in Norfolk, where we’d meet Mr Bangernomics himself, James Ruppert. You can read his thoughts below but, suffice to say, I was a little surprised and ever so slightly sore that this magazine’s cheap car champion chose not to make me a happy man with a very generous offer.

With half the journey complete, it was time to turn around and head home, this time hacking cross-country rather than using motorways. From Swaffham, we skipped across to Huntingdon, then past Northampton, down to Bicester and across the Cotswolds to Cheltenham, before picking up the M5 for a short blast back to Bristol. A whisker under 500 miles in total.

The Micra simply didn’t miss a beat. It rode well (at least until I hit anything larger than Petri dish), it was comfortable, visibility was excellent, the unassisted steering and lively handling made it a giggle along B-roads, the 16-valve petrol engine was as sweet as anything and the gearshift was tight and direct. Aside from the clutch bite point being very high, there was no sign whatsoever that P289 BUX might be about to expire. I bet I could run it for 10 months, let the MOT lapse, sell it for parts and make back a good chunk of my £200. 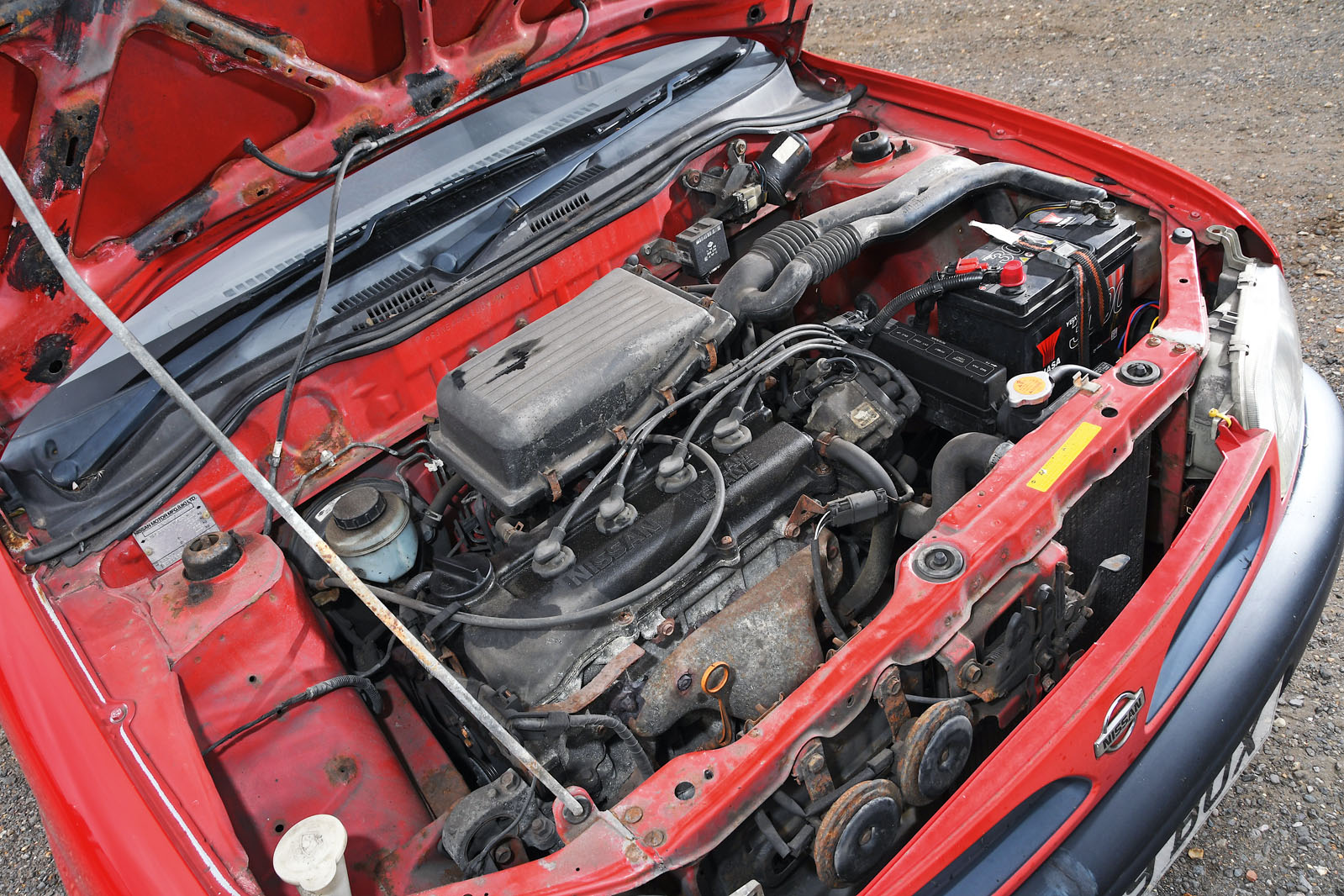 But we have bigger plans for it. To find out exactly how tough a 22-year- old Nissan Micra is, we’re taking it grass-track racing. Stay tuned...

I’m often asked whether it is still possible to practise hardcore Bangernomics. You know, buy a car for a couple of hundred quid and actually use it. Well, right now I am looking at exhibit A and that’s Dan’s magnificent Micra.

This everyday hero has just been driven halfway across the country so that I can kick the tyres and it is hard not to be very impressed. It is, of course, cosmetically compromised on the outside with fading red paint, some rust on the arches and cracked front bumpers, but none of that stops it working. There is some underseal slapped on the sills, which suggests that structural rot will get it eventually, but not just yet. What keeps the Micra moving is the powerhouse 16-valve engine under the crumbly bonnet. No leaks, no drama, no issues – just an utterly reliable buzzbox.

The interior is a testament to the power of seat covers. It is comfortably hard-plastic 1990s in there and proof that a six-figure mileage does not necessarily mean trashed surroundings.

Dan’s followed all the fairly fluid, golden rules of Bangernomics and got it right. If you are careful, you can buy a cheap, characterful banger.

This article was originally published on 6 October 2018. We're revisiting some of Autocar's most popular features to provide engaging content in these challenging times.

But even then there are plenty of options.  Saab 9-5 is best bet.  Pretty bulletproof, enviable safety record and plenty available for next to no cash.  Bigger cars are often even better value - as someone else pointed out, they can be cheaper to insure.  Early '00s Mondeo a very strong choice too.

But even then there are plenty of options.  Saab 9-5 is best bet.  Pretty bulletproof, enviable safety record and plenty available for next to no cash.  Bigger cars are often even better value - as someone else pointed out, they can be cheaper to insure.  Early '00s Mondeo a very strong choice too.

I did say a 'rust box' 20 year motorcar.  Saab 9-5 is a great car for an enthusiast but I wouldn't class it as a cheap practically run-a-bout.

But yes I should have made it clearer that I wouldn't feel comforable in a 20 year MICRA with rotten sills. Something the article should have pointed out.

Just imagine knocking your house down when it was 10 years old and buying a new one. Or accepting that your 3-year old house had depreciated to 30% of its new value. That's effectively what we're doing with our cars!

Just shows the power of marketing and the assistance of the PCP...