BACK TO ALL NEWS
Currently reading: Price match promise: Volkswagen Golf R vs. first-gen Audi R8
UP NEXT
How Max Chilton and the McMurtry Speirling conquered Goodwood

The premise is so simple there has to be a catch. A mid-engined V8 supercar from a highly respected premium brand for the same money as a new hot hatchback. Or less.

But that’s what you’re looking at right here. The Audi R8 you can see belongs to Dick Powell, founder of renowned design business Seymourpowell, and we’ve insured it for £40,000 to reflect its condition and low mileage. But clean examples are out there for £30,000 or less once you’ve done a spot of haggling. Meanwhile this five-door Volkswagen Golf R retails for £33,740 with the dual-clutch automatic gearbox fitted to the test car, although if you play fast and loose with the options, as VW most certainly has with this one, that price heads north pretty rapidly. As seen here with its titanium exhausts, this car, a Volkswagen Golf, remember, is just £325 shy of being a fifty grand car… 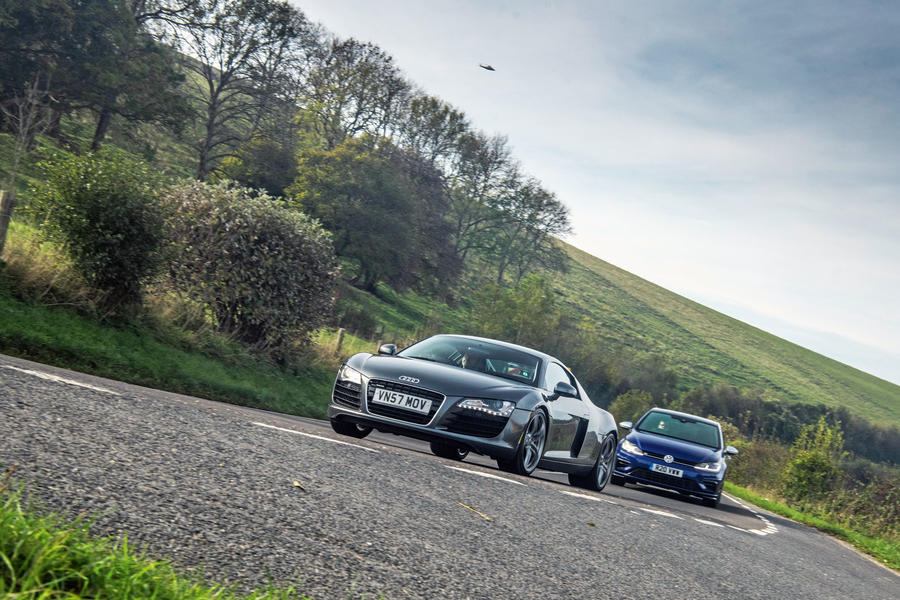 But on the drive over the Golf R reaffirmed why, to me at least, it remains the pick of the super-hot hatch brigade – so much easier to operate than the Honda Civic Type R, far easier on the eye yet scarcely less engaging on a decent run. It will be very interesting to see what the full-fat Trophy version of the Renault Sport Mégane is like when it arrives in the new year.

For now though, I’m being blown away all over again, not just by the Golf’s relentless point-to-point pace, brought about by an unrivalled blend of power and all-weather poise in the class, but also by the tranquillity that accompanies it. Maybe the interior should be a bit more exciting, maybe the exterior looks too much like a normal Golf with a big wheel upgrade, but I’m not sure I care: in all situations it works better than you could hope, as all the best fast Golfs have done for more than 40 years.

I’m not alone in considering the Golf the best of its kind, either. Powell has one as his daily driver (“you could have used mine if I’d known”) and bows to no one in his admiration for it. 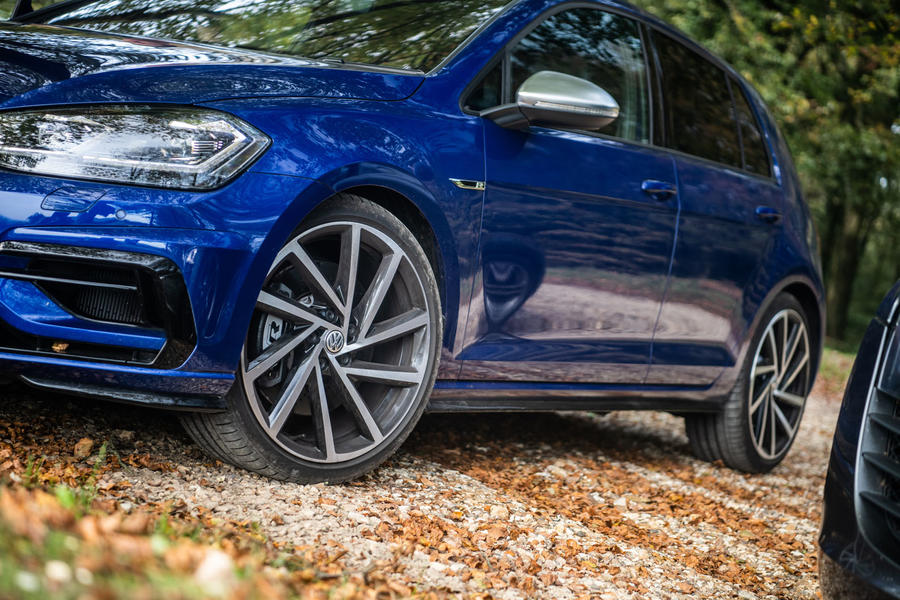 But an R8 is something different. Perhaps I shouldn’t be doing this, because the world has moved on and what appeared to be such a capable and entertaining car (miraculously so, given that it was Audi’s first mid-engined machine) 10 years ago may now seem, well, just a little lame. And it’s true that on paper it doesn’t appear to be all that special: 414bhp is no longer a remarkable figure, while its 4.6sec 0-62mph time is no quicker than the Golf’s.

But I’m not sure I care too much about that right now. I’m just enjoying the simplicity of what I can see: a proper handbrake, a key that fits into an ignition slot, three pedals, analogue dials and the merest smattering of steering wheel buttons. 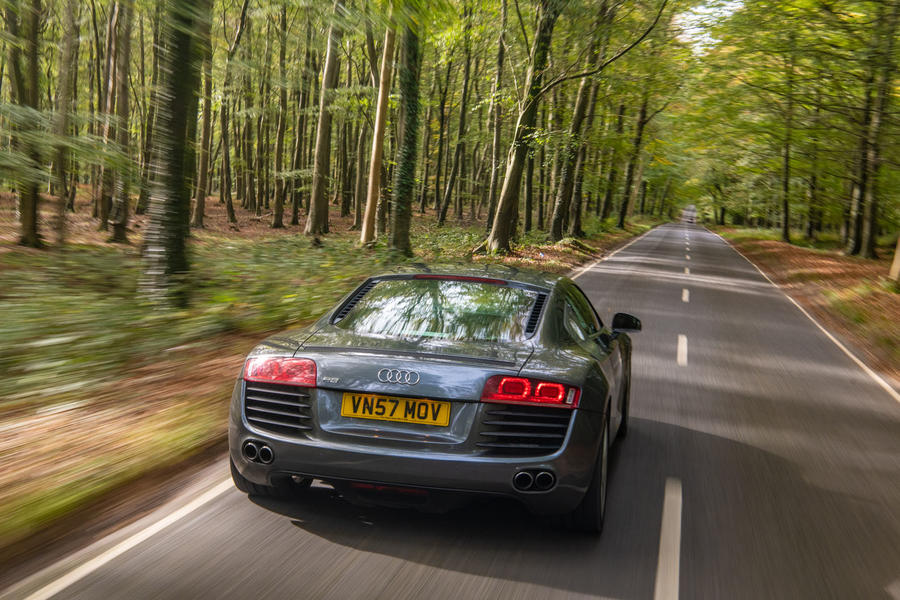 The driving position is superb and all round visibility almost Golf-good, which for a mid-engined car is extraordinary. The 4.2-litre V8 spins smoothly into life and with no preamble at all – because the way this car operates is far easier to understand than any modern Audi – we are under way.

Which is when, without my foot going anywhere near the floor, the R8 near enough bowled me over. In that moment there was not a damn thing about it I didn’t like, and very little that didn’t make me question the direction supercars have taken of late. We’ll start with the engine: it’s normally aspirated as, to its eternal credit, is that of the current R8. But they are a rare and dying breed, and the crossplane V8 is one of the very sweetest.

Gearbox next: it’s not only manual but also has a superb shift quality and an exposed gate, like those on old Ferraris and Lambos. Rifling through the ratios is just a joy. 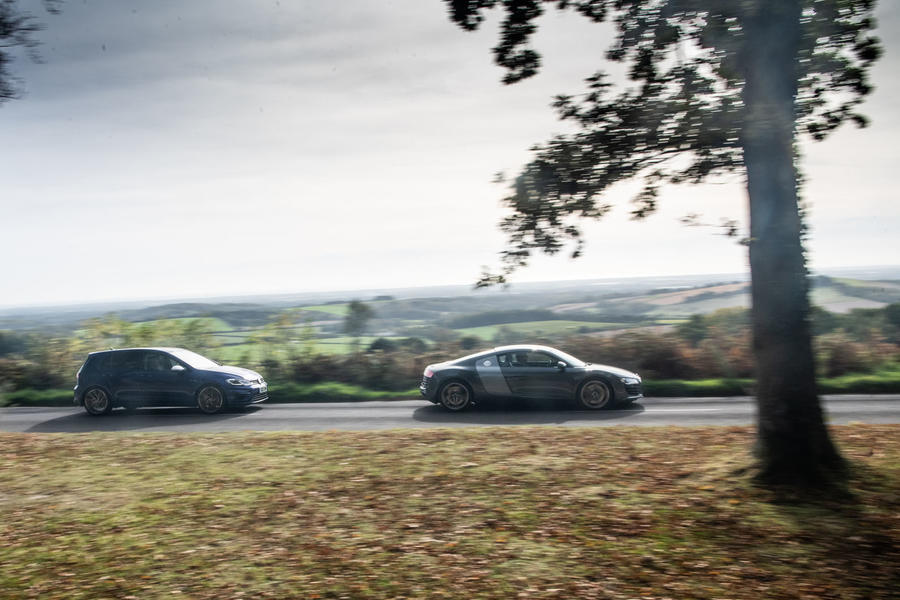 But it’s the suspension that surprised most, because I’d forgotten how deftly sprung these cars are. Its ride is amazing, far better than the Golf’s let alone any modern supercar. The body is allowed to breathe with the road but never enough to let it float over crests or wallow in dips. It’s a car that’s set up for the road, not the track, which appears increasingly to be the way chassis engineers are heading today.

Ah yes, but is it fun? You bet it is. You can sling it about if you like – Powell recently enjoyed a day throwing it around Thruxton – and it’ll be balanced and indulgent, but just to guide it through the lanes, savouring the feel of its hydraulic steering, was a delight all by itself. 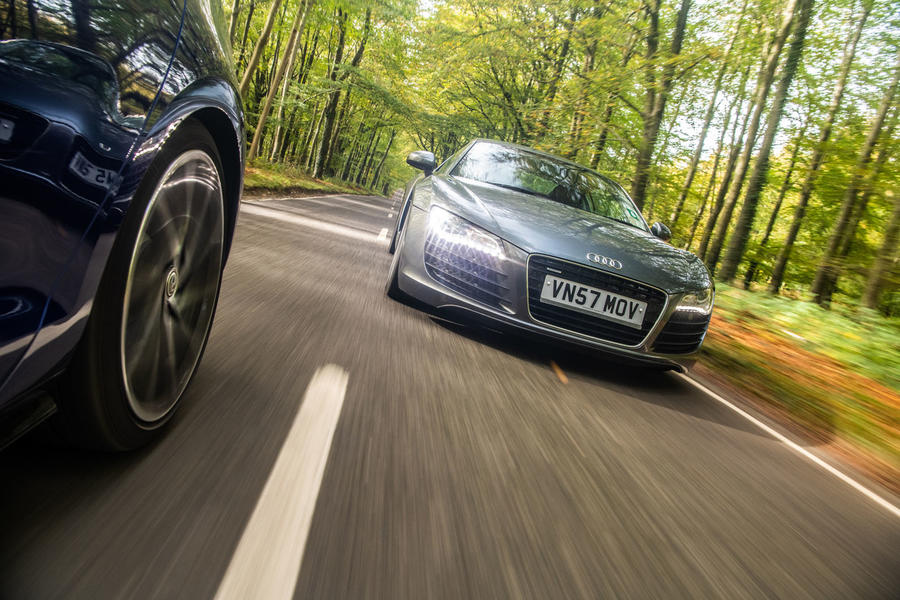 What’s more, it may be way slower than a modern R8 but it’s still quick enough, especially if you let that delicious motor operate somewhere near its 8250rpm redline. Spin north of 6000rpm and it simply howls.

I’d expected the Golf to feel quicker point to point but it wasn’t, at least on the roads we used. In both cars the limiting factor was not power or grip but the environment. The VW was a little more chuckable, even though its wheelbase is only fractionally shorter but largely because it has quicker steering. But in a straight line there was precious little in it: the Golf has less torque but what its got is far more accessible, while the additional power of the R8 is offset in part by its slightly higher kerb weight and the fact you need to keep the V8 on the boil. The Golf’s elastic turbo motor, meanwhile, responds eagerly at almost any point of the rev range. 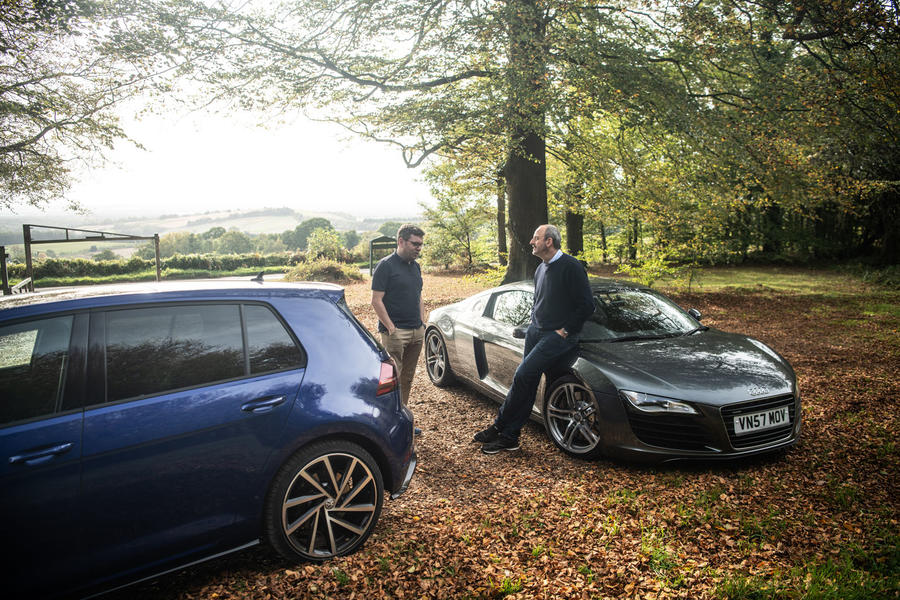 Subjectively, however, the R8 is a class apart. The Golf is the best conceived, most skilfully executed example of its kind, but it remains a mass-produced tool. It’s like a high-quality battery-powered watch that will be at least as good and probably better at telling the time as a hand-built, exquisitely engineered mechanical chronograph, but you don’t need to think much about which you’d rather have on your wrist.

But there’s something else to say here, too: this drive has made me look at the R8 in a whole new light, not just in comparison with the Golf, but with its rivals when it was new. I’ve often wondered what I might tool about in when this business has had enough of me and hoped that funds might stretch to a 997-generation 911 or an early-ish Aston Martin V8 Vantage. I never considered the Audi R8 until now.

I’m not saying that my earlier thinking has gone out of the window and it’s an R8 or nothing, but I’d put this johnny-come-lately supercar from the manufacturer with zero track record in the field absolutely on par with those fine old blue bloods. And that might be the R8’s greatest achievement of all. 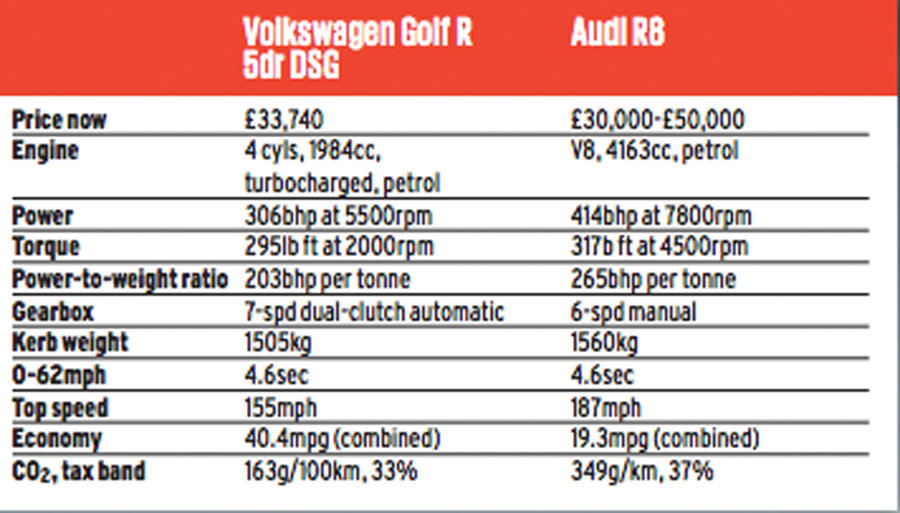 Jonathon Parker from fast Audi specialist Redline Specialist Cars in Harrogate reckons an early R8 is a seriously good buy at present. “Look around the £37-38,000 mark and you can now buy some very nice cars,” he says. “However, I advise against getting one with an R Tronic gearbox. They wear out clutches fast and even if you don’t mind that, you have to lift off the accelerator between shifts if you’re to be at all smooth, in which case you might as well have a manual.” He says cars with R Tronic – an expensive option when new – will be hard to sell on, a fact likely to be reflected in residual values. Otherwise he’s heard no horror stories, even on high-mileage cars. 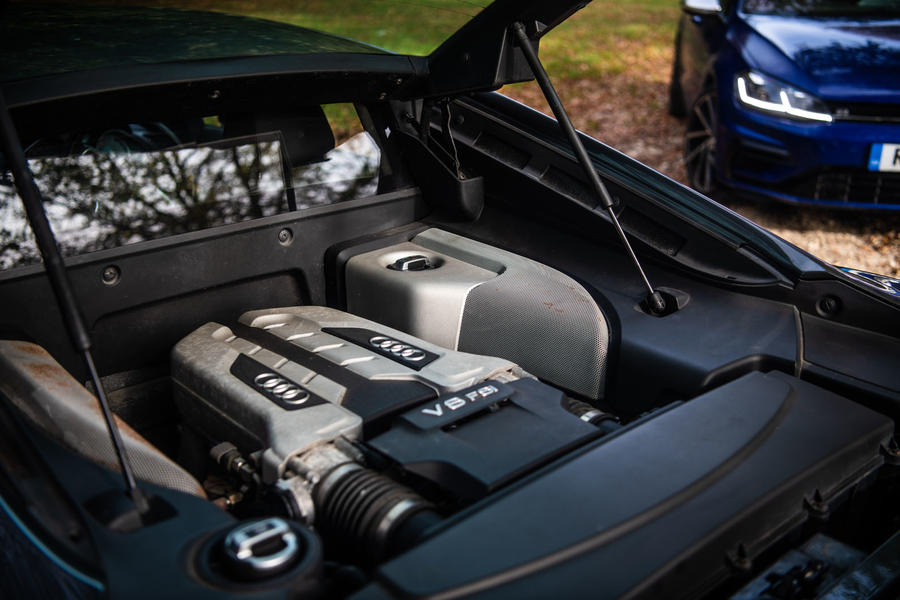 That said, watch for corrosion on the leading edge of the bonnet if stone chips are left unattended or poorly repaired (R8s are mainly aluminium but not entirely rot-resistant). At the rear, that glass screen allows a great view of the engine but means that if the car is left outside, condensation on the inside of the screen can rain on the engine, causing unsightly but not structural corrosion. 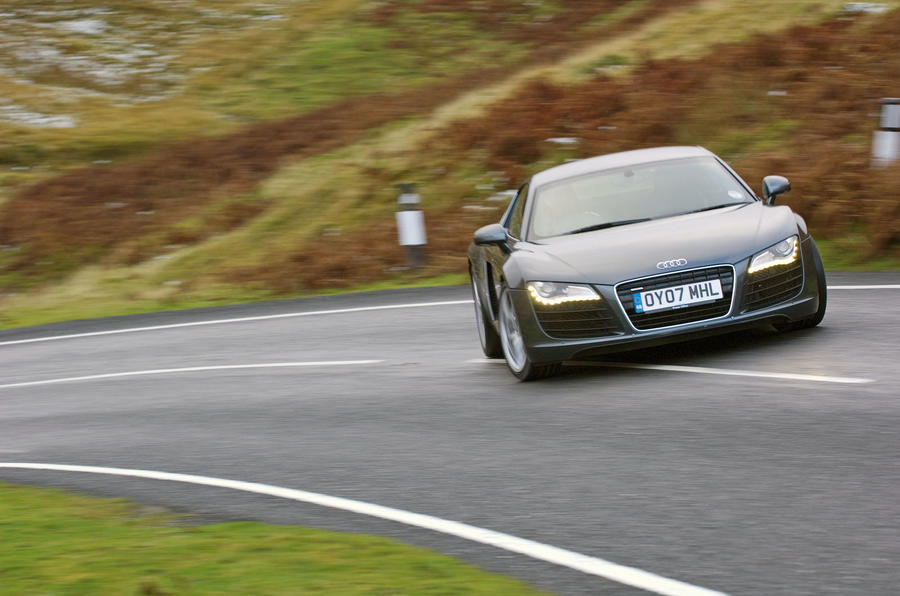 2008 R8 manual 32,000 miles, £42,000: This is where you start to find the really good R8s – low-mileage cars with full histories and a tempting list of options. This one has sports seats, upgraded nav, Bluetooth and a premium sound system. I’d not look at a car that isn’t a manual. 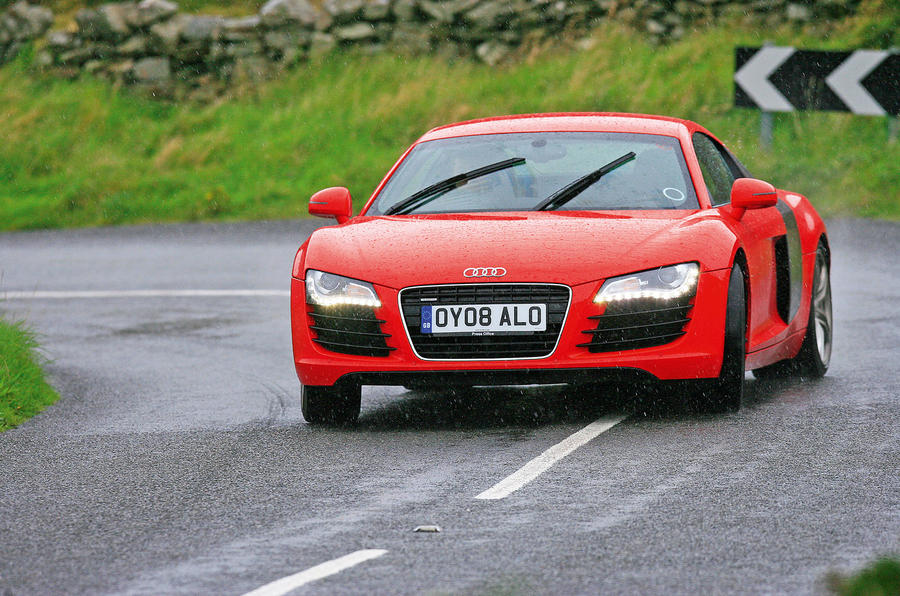 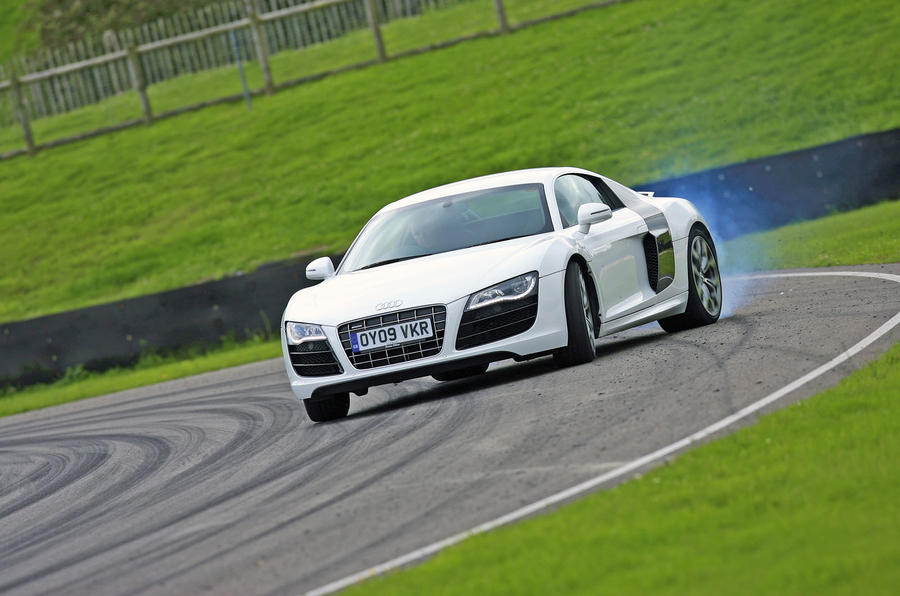 This article was originally published on 16 December 2018. We're revisiting some of Autocar's most popular features to provide engaging content in these challenging times.

Buy them before we do: first-gen Audi R8

I would choose the R8 over the golf, however finding an R8 which has had a careful owner/s is a a concern.
2008 R8 manual 32,000 miles, £42,000: This is where you start to find the really good R8s for example, so what's the implication for ones 10K cheaper, not so good??
It'll be interesting to see what happens over the next 12 months to used R8 prices (and similar)
I think we'll be in for some unbelievable bargains due to the imminent recession (which is dreadful BTW)
chris1969 16 December 2018

If you throw depreciation into the mix, the R8 is probably the cheaper to run .. certainly for the first 2 years of golf ownership.

So not a bargain then?

which would be cheaper to run day to day...?

...would be cheaper than either. Sometimes running cost isn't a prospective purchaser's deciding criteria.

which would be cheaper to run day to day...?