BACK TO ALL NEWS
Currently reading: New vs used: Volkswagen ID 3 vs Jaguar I-Pace
UP NEXT
Lamborghini confirms LMDh entry for 2024

The Jaguar I-Pace was launched in 2018, but can an early model fend off a new Volkswagen ID 3? We run the numbers
Open gallery
Close

The used car scene is never better than when it’s putting temptingly within your reach a car that you had imagined would be unattainable, or bringing viability to a vision for personal or family transport that might otherwise have remained a pipe dream. It’s doing that all the time, of course, right across the full spectrum of the car market – which is why we love it. But right now, and perhaps more significantly than anywhere else, it’s doing it with the electric family cars that, a few years ago, first demonstrated how an EV could be practical, usable, desirable, versatile and uniquely rewarding to own.

But then there’s the Jaguar I-Pace, which beat its German equivalents to market by nearly a year back in 2018. The all-electric Jaguar is now set to cross an important threshold as a used car, with the earliest examples about to hit that key three-year life-cycle milestone. And so, as many lease deals and finance terms expire over the next few months, used examples will be brought back into showrooms, and then often traded on, in bigger numbers than they have been so far. Watch the classifieds closely this autumn and, before too long, the sub-£40,000 I-Pace is sure to pop into existence. Once it’s with us, it will be here to stay.

Funnily enough, that’s exactly the kind of money that you might now be considering spending on a new EV – albeit perhaps one of a slightly subordinate size and class than the I-Pace.

This story is part of a wider feature that sees new cars go up against used alternatives. You can read the rest here 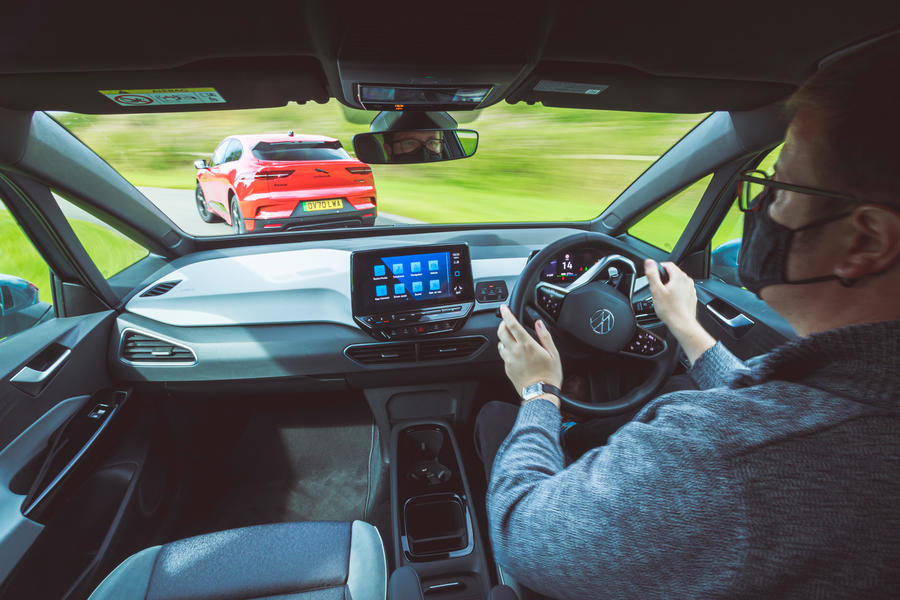 And that’s what brings us here, to the first of our new versus used head-to-heads. If £40,000 happens to be your budget for a family-life-compatible electric car in 2021, then, should it go on a brand-new, top-of-the-line Volkswagen ID 3 Pro S Tour, complete with a handsome equipment level and the biggest battery and most powerful electric motor that Wolfsburg has to offer? Or should it go instead on a three-year-old I-Pace that offers big relative gains on performance, practicality and desirability, to name just a few, but which, as a used electric car, represents an even bigger leap of faith than a new one?

The first thing to note is that, even if you’re buying used, jumping into a new-to-you I-Pace needn’t be done without a safety net. Volkswagen offers a three-year, 60,000-mile warranty on the ID 3; Jaguar gives the I-Pace three years and an unlimited mileage as standard. You are likely to be looking at a used example of the British car at around three years of age for our budget, of course; but bear in mind that any car that is still within manufacturer warranty and that has been serviced only by main dealers can have said warranty extended at extra cost.

There are certainly good reasons why you might decide to pay a premium for an ‘approved used’ I-Pace from a main dealer, rather than hunting out the very cheapest car you can. Approved-used I-Paces tend to cost between 10% and 20% more than equivalent cars in independent dealer stock, but they can also qualify for finance contribution and free home charger deals, and they come with two years of dealer warranty cover, too.

Handily, Volkswagen and Jaguar have comparable terms for battery warranty. Both offer cover against failure caused by manufacturing defect until eight years and 100,000 miles have elapsed. In both cases, the cover is transferable to the car’s second and third owners – and both companies will repair or replace a battery that doesn’t retain at least 70% of its original usable storage capacity up to that age and mileage. Buy an approved-used I-Pace and an appraisal of its actual battery capacity will come as part of the deal. 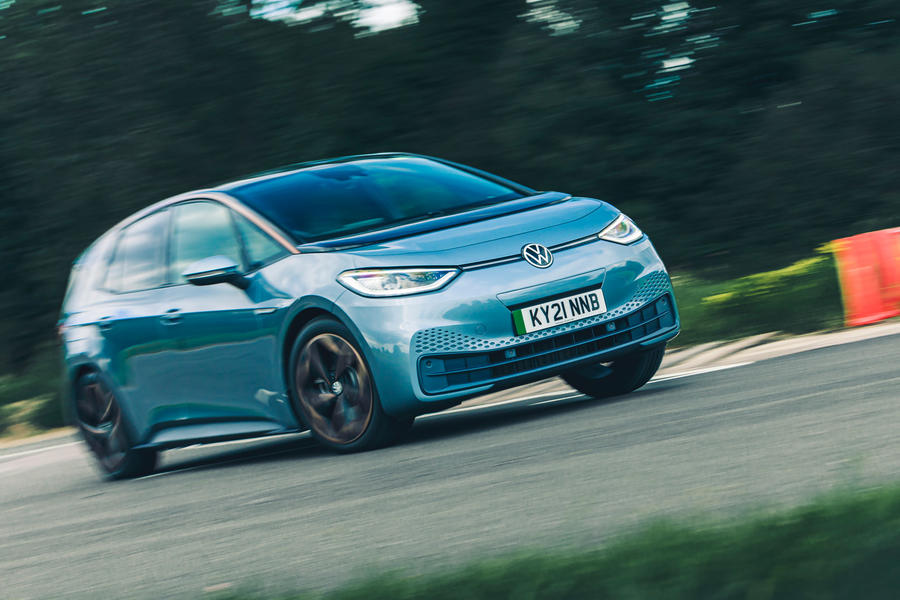 Wherever you buy, though, you shouldn’t expect your I-Pace to simply tell you during a test drive if its battery has degraded or not. Usage apps for your smartphone are available to help you keep track of usable battery capacity based on indicated state of charge and actual miles travelled. An I-Pace with Jaguar’s latest battery management software that isn’t returning a genuine 160 miles in mixed use is probably worth having investigated. Higher-mileage cars that have been fully charged and rapid-charged routinely are the likeliest culprits.

But a good three-year-old I-Pace with a healthy battery and some dealer warranty cover would offer quite a lot more than a new ID 3. The newer Volkswagen does more with less as regards battery capacity, associated range and charging rate. Whereas the Jaguar can charge at a rate of up to 100kW from a motorway DC rapid charger, its rival can manage up to 125kW – and take power more quickly from a home-fitted AC wallbox, too.

In real-world driving, you could expect between 250 and 280 miles of range from the ID 3’s 82kWh of gross battery capacity. From the I-Pace, range will depend on battery condition, but a healthy used car ought to do between 190 and 220 miles from a battery of 90kWh compared with the Volkswagen’s on like-for-like terms.

That the I-Pace is bigger and heavier than the ID 3, with two motors for four-wheel drive, is why it’s that bit less energy efficient. The thing is, it certainly doesn’t perform or handle like the bigger car of the two. It’s easy to forget what an enjoyable car to drive the I-Pace is. It’s suppleriding yet handles with surprising balance and a fluent sort of agility. 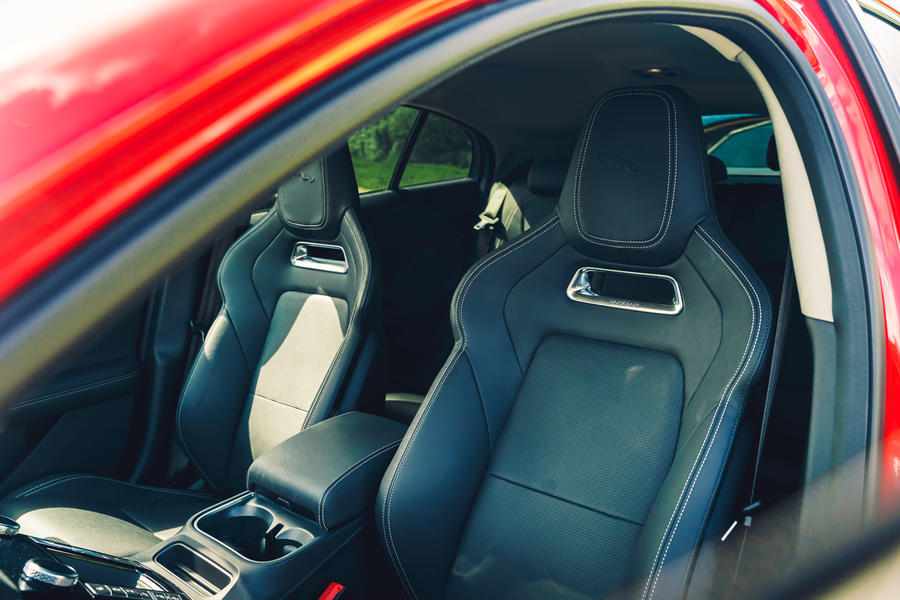 Under power, it’s typically responsive from low speeds, and it’s still fast when accelerating on the motorway. Even with so many more electric rivals today than it had three years ago, the I-Pace is engaging to drive in a way that so many EVs simply aren’t.

With little more than half of the I-Pace’s peak power but nine-tenths as much weight, the single-motor, rear-driven ID 3 doesn’t punch nearly as hard under full power. While dynamically competent and viceless, it’s a bit soulless to drive by comparison.

Both cars have a pleasingly quiet ride, but the Jaguar’s is the smoother and more closely controlled where air suspension is fitted (steel coils came as standard and are much likelier to feature on lower-trim cars).

As it’s smaller and has a tighter turning circle, the ID 3 is marginally the more manoeuvrable car.

With plenty of room for kids and teenagers in the back and a medium-size boot, the ID 3 would make a very good second car, then; but the I-Pace is a proper adult-sized four-seater, with cargo space for longer trips and hauling bikes and buggies around.

It has luxury-car interior richness, too, and plenty of exterior-design star quality, whereas the ID 3’s cabin quality looks and feels cheap and unconvincing for nearly £40,000, and its exterior design is quirky but clumsy in places. 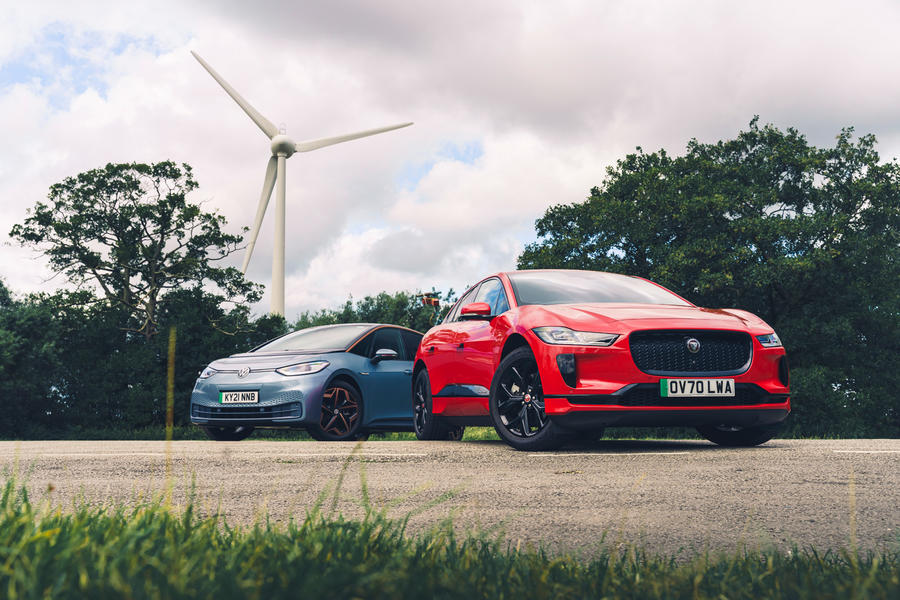 You’ve probably already worked out where our £40,000 would go here. There’s a strong case for ID 3 ownership, but not at this price. We would sooner watch and wait as I-Pace prices come down this autumn and, when just the right main dealer example pops up, lace up our haggling boots.

Nobody wants to take the plunge on an EV without good dealer back-up, but Jaguar’s approved-used scheme ought to give you just enough confidence to take on a car like this. Assuming a real-world 200-mile range sounds like it would be enough for you, driving an I-Pace would be its own reward.

Log in or register to post comments
harold1968 5 September 2021
Sorry, this article full of generalisations and writer pre-bias is not worthy of a car magazine. The ID3 starts at 27, the Ipace starts at 60. Despite that, and the writers errors and bias, the ID3 looks much cooler then the jaguar. In fact the ID3 is one of the best looking cars on the road full stop. Yes the jaguar has leather and more switches but the ID3 has a different generation of interface.
Interior space in the ID3 is superior, both left and right and height, but another error of the writer.
A new 33 ID3, before many discounts, is far superior to a 3 year used ipace, except for badge snobs
A lazy article
Stockholm Calling 4 September 2021

People seem to be obsessed with the list price but the vast majority of new cars are bought via a PCP or lease, so the important figures are the deposit and the monthly repayments, not the RRP.

Agree to Cavellini, the price as new of electric cars is to steep it clearly slows down adoption meaning we can't expect families to go electric, until practical electric family cars either go down in prices or reach second hand market at 30K or less. People aren't magially going to be able to afford 40K because manufacturers can't produces those cars for less.