BACK TO ALL NEWS
Currently reading: A Mini adventure: every generation driven... on ice
UP NEXT
2023 Lamborghini PHEV supercar: Aventador successor spotted

A Mini adventure: every generation driven... on ice

Ahead of the next-gen Mini Electric's arrival, we experience every other model on a frozen lake
Open gallery
Close

A frozen lake deep inside the Arctic Circle might not be the last place you’d expect to see a classic Mini - but it’s definitely not the first.

The Issigonis-designed classic would surely be more at home nipping through Knightsbridge than navigating around snowdrifts, As would the three more modern Minis lined up behind it. But there’s method to the madness.

All four versions of the iconic British supermini have been gathered to demonstrate the progress made by the next-generation electric Mini hatchback, due on the road in 2023. It’s in Sweden undergoing cold weather testing, and we’d been invited for a poke around an early development prototype.

A few laps of the icy test track in what came before is as good a context as any for what customers can expect when the new car arrives next year.

The story of the original Mini has already been told plenty of times, so there’s no need to repeat the obvious here. Alec Issigonis, transverse A-Series, front-wheel drive, Paddy Hopkirk, Monte Carlo, affordable motoring for the masses, icon, etcetera – you know the drill.

But no matter how well-known the original Mini is, it remains an unusual experience to drive one today. At 6ft2, getting into this tiny car feels somewhat like folding myself into a child’s pedal car, legs open to clear the curiously airbagged steering wheel and hunching to see out of the windscreen rather than just look at the header rail.

It didn’t help that the seat adjustment was stuck, but previous original Mini experiences suggest it’s the kind of driving position that wouldn’t get signed off in a modern car. All the pedals have a disconcertingly short travel, and the gearchange is long and vague. 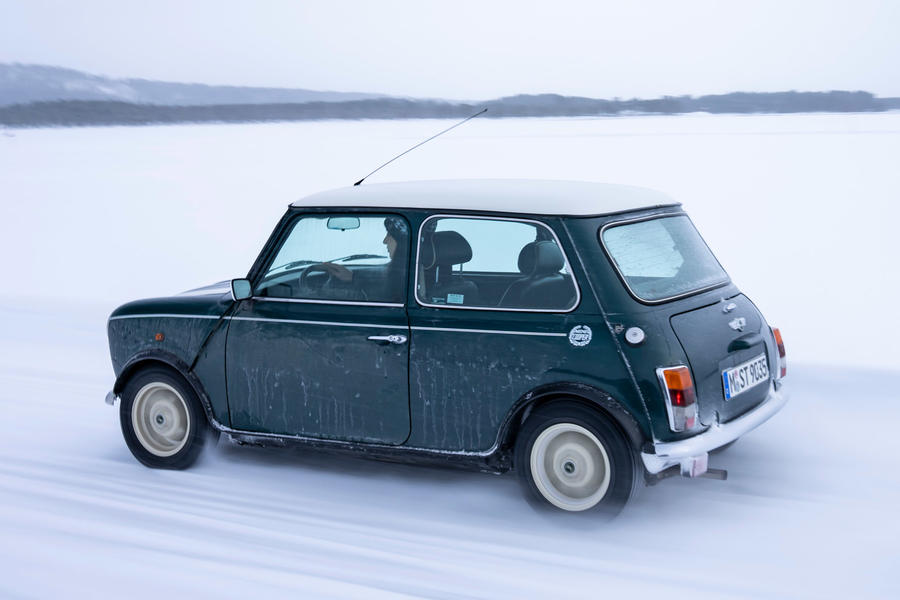 It’s a slightly alienating experience, but the way it drives is actually really rather delightful. The A-Series engine catches quickly and sounds rorty and eager. On ice, the steering is fingertip-light, but the way the body moves communicates perfectly what the chassis is doing.

Best of all, where the later cars’ weight means they want to push on in the corners, the original’s tiny dimensions and featherlight construction mean it darts into corners, with the rear axle feeling super-agile, like it’s on casters. Off the throttle, the back swings round in the most benign and adjustable manner.

I quickly forgot about the woolly gearchange too, because you can just leave it in third as the relatively torquey engine pulls this light car out of corners from low revs. It’s huge fun, and if it wasn’t for leg cramps and the feeling of responsibility that comes with driving Mini’s museum piece, I could have kept going round and round the frozen lake. 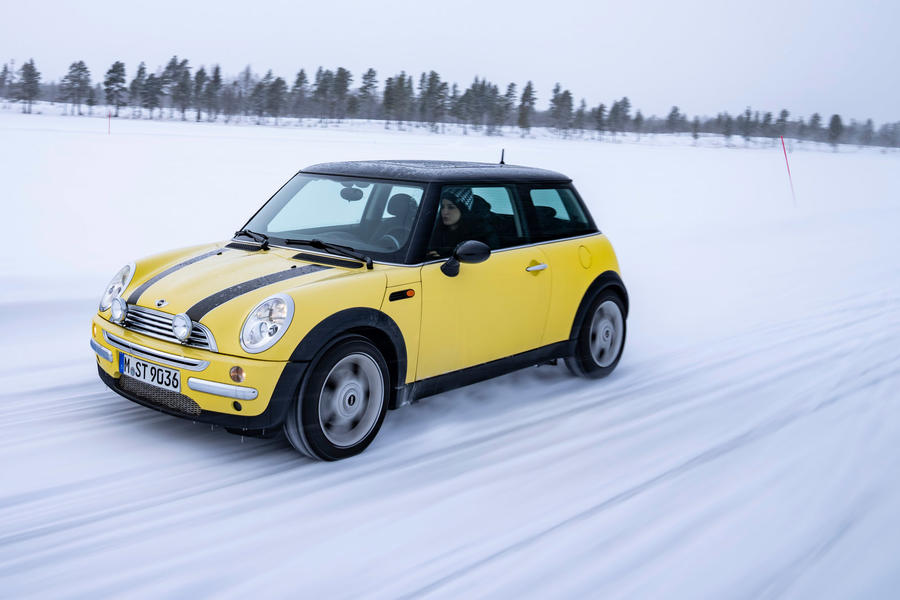 How to reinvent an icon? By the late 90s automotive designs were governed by crash and emissions regulations no-one could have imagined in the 50s, and buyers had much higher demands for practicality and ergonomics. It was clearly impossible to make another car with the same tiny footprint as the original Mini. Not while keeping it looking as recognisable as a Mini, let alone at a cost.

Instead, the Rover and BMW teams created something that captured the style and driving character of the original, but turned it into a premium small car for the 21 st century. To great effect.

The R50 Mini, as this generation is known, still broadly feels like a modern car, despite this ‘new Mini’ being 20 years old itself. It has airbags, a comfortable seating position and very good refinement. But where the latest generation has got quite bloated and a little bit of a caricature in places, the R50, with its short overhangs and squat stance, looks fantastically fat-free.

It’s great to drive too. I admit to being a fan of this generation of Mini as an owner of a slightly later Cooper S. Compared to that and the later generations, the R50 Cooper isn’t particularly quick, but it feels sweeter to drive.

The car’s not quite as light and inertia-free as the original, but it still feels light, chuckable and communicative. Modern Minis have never been as playful as say, a Fiesta ST, but on the ice, you can still tweak the balance of the R50 to your heart’s content.

The manual gearbox is a joy to use too, with a short and satisfying action, and the much-mocked Chrysler-based four-cylinder feels willing and has an enjoyably parpy exhaust. 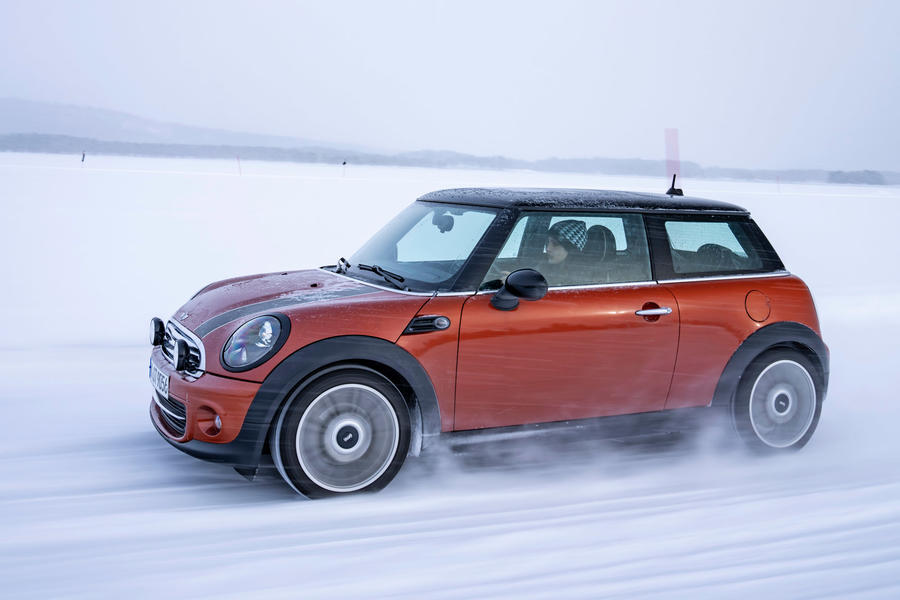 I remember the period reviews saying how little had changed for the second generation. In hindsight, that wasn’t such a bad thing. More had changed than is immediately obvious, particularly in the interior, but as it still uses the same platform, the R56 is remarkably similar to drive to the R50.

It has broadly the same dimensions as the first generation, and a similar balance. However, it went to a fully electric power steering system and lost just a little something in the process. Steering feel is not massively important on a frozen lake because in most cars, there is none. As there is barely any friction to push against, the steering of any car feels eerily light. Still, the R56 would go sideways more quickly and with less warning.

The 1.6 engine, now a shared development between BMW and Peugeot, runs more smoothly than the unit in the R50, but is also slightly less characterful. It’s a similar story for the interior, which is arguably better built, but slightly more plasticky and with less retro charm. 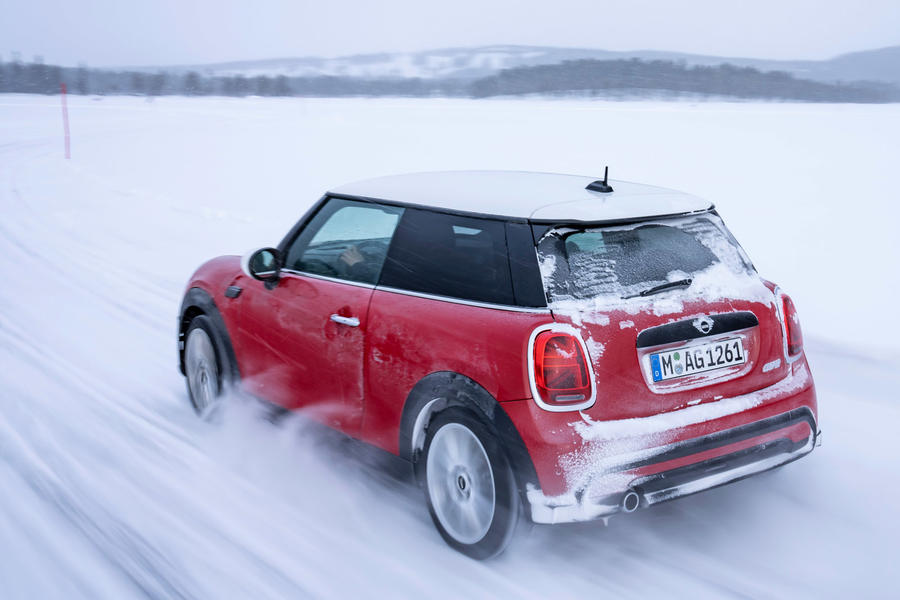 And so to the present day. Where the second-generation new Mini built on the substance of the original reboot, the third generation was a step change. And not necessarily for the better. After more than a decade of success with the Mini, the BMW mothership had proven to itself it could make an engaging front-wheel drive car. To take advantage of that, an all-new platform was developed for various front-wheel drive BMWs. It also meant the Mini hatchback had to fall in line and use the same underpinnings.

The result was a much bigger car, one with longer overhangs and proportions that deviated further from the 1959 original than ever. It’s arguably a better car than ever before, with more interior space, up-to-date tech and modern engines. The electric version that joined the range later can lay claim to being the first credible warm – if not quite hot – hatch.

But driving one, even briefly and on ice, gives some clear pointers for the new generation. Where the previous generations clearly communicated how little grip there was on the ice

through feather-light steering, you wouldn’t know you weren’t on tarmac in the current Cooper. All current Minis have fairly heavy, treacly steering and clearly, the electric motors compensate to make the feel exactly the same whatever the conditions. The only way I could tell the car was understeering was because the snowdrifts were getting closer.

The ice cube in your cocktail might look glassy-smooth, but grooves worn into the frozen lake mean that the ice track is actually surprisingly bumpy. That shows another area for improvement: the current Mini tends to be slightly bouncy on less-than perfect surfaces.

The three- and four-cylinder engines in the current car have proven more versatile and reliable than the old powertrains, and instant EV power suits the Mini recipe perfectly.

It looks like the upcoming fourth generation will retain those elements, but return some sharpness to the handling and styling, which is just what the Mini needs. 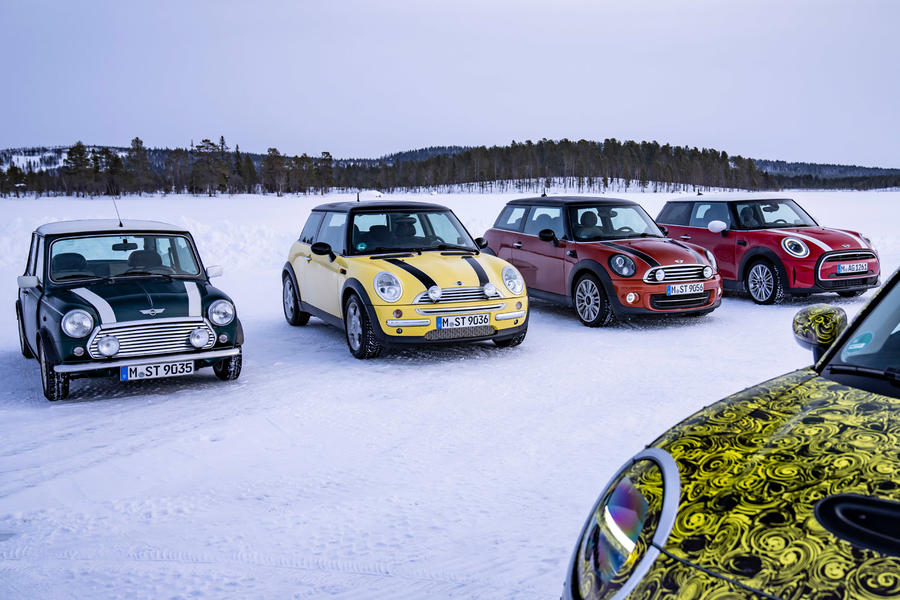 Living at 1800m in a ski resort I regularly drive my R53 Cooper S on snow and ice and it's fantastic for that purpose. I also have a AWD Alpina B5 which is better than a previous xDrive BMW but neither is as much fun, or arguably confidence-inspiring as the FWD mini.

"The Issigonis-designed classic would surely be more at home nipping through Knightsbridge than navigating around snowdrifts,"

I know from personal experience, the Issigonis-designed classic would be more at home nipping up Cheddar Gorge on a quiet early morning. I grew-up just a few miles away in the village of Priddy.