BACK TO ALL NEWS
Currently reading: How Volkswagen conquered China's toughest road - with onboard video
UP NEXT
2024 BMW X3 primed to take on Mercedes-Benz GLC

How Volkswagen conquered China's toughest road - with onboard video

Watch the blistering electric racer set another record on one of the world’s most spectacular mountain roads, and find out how it was possible
Open gallery
Close

Filmed from the cockpit, the video shows driver Romain Dumas taking the record-breaking EV through the mountain road's 99 turns, and emphasises how quickly it accelerates out of each. Watch it below, then read what it was like to watch the run take place.

The Volkswagen ID R was always going to set a new hill record on Tianmen Mountain’s Big Gate Road. Of course it was. For one thing, it was the first official timed run up the 6.776-mile ribbon of concrete, which features 99 tortuous turns as it winds 3609 feet up the spectacular mountain known as the Gateway to Heaven in China’s Hunan province, at an average gradient of 10.14%.

The road was built in 2006 to reach the amazing Heaven’s Gate natural arch and other sights atop the mountain. A mammoth project, it snakes and winds up the steep, rocky peak, carved by ingenuity and sheer force of will at angles a road has no place being built. It’s normally only used by a fleet of tourist buses – but even the most committed driver of a Golden Dragon XML6700 would struggle to match Romain Dumas in VW’s 671bhp electric record breaker. A few cars have previously tackled the road in anger. Land Rover brought a 567bhp Range Rover Sport to the mountain, with Jaguar’s Formula E reserve driver Ho-Pin Tung summiting the hill in 9min 51sec. But that time was unofficial, and set on a slightly longer course. So what does Dumas’ new official time of 7min 38.585sec, at an average speed of 53.07mph, actually prove? The ID R’s previous record-breaking runs – an outright hill record on Pikes Peak; an electric Nürburgring Nordschleife lap record and an outright Goodwood Hillclimb course record – were set on famous, historic motorsport venues, allowing for direct comparison with a huge variety of proven machinery. People know what it means to lap the Nordschleife in 6min 05.336sec.

But you shouldn’t dismiss VW’s Tianmen Mountain trip as nothing more than a publicity stunt. For one thing, any manufacturer-run motorsport programme is, at heart, a publicity stunt. While the ID R does offer some learning about performance EVs, it has relatively little in common with the newly revealed ID 3. It is intended as the ‘sporty figurehead’ of the ID family: in that ambassadorial role, VW absolutely had to find a showcase for it in China, both the firm’s biggest market and the world’s largest EV market. VW sold 3.11 million cars in China last year, and will launch local-market ID models next year. By 2023, VW is planning to offer 10 ID models in China – and the country will be a key part of its plans to sell one million electric cars worldwide annually by 2025.

But where in China could VW go? The country isn’t exactly flush with grand, challenging and historic motorsport venues in the style of Pikes Peak (which held its first hillclimb in 1916) or the Nordschleife (which opened in 1927). The Shanghai International Circuit, built in 2004, might be firmly established on the Formula 1 calendar, but it’s not exactly inspiring. Without a historic venue to capitalise on, VW created its own. And instead of breaking a record, the aim was to set a standard for others – and then invite them to come and beat it. Tianmen Mountain was chosen because, as well as having a tough, twisting and scenic hillclimb-style road, it is one of China’s most famous tourist locations. Situated just outside the city of Zhangjiajie around 930 miles south-west of Beijing, the mountain draws masses of visitors all year round. VW agreed on a start and finish point with local officials to ensure future attempts use a standard course.

While there might not have been an official time to beat, VW wanted to ensure the ID R completed the course as close to its potential as possible. Yet to even know what time was possible on such an unusual venue proved complicated.

“All engineers like new challenges, and this was a big challenge,” says François-Xavier Demaison, VW Motorsport’s technical boss. “It’s difficult because the road is like something you’d find on the Monte Carlo Rally. To come here with a car that’s like a sports prototype, you have to be a bit crazy – but engineers are crazy.”

VW Motorsport team members visited the mountain late last year, making several runs up the course to video it and capture data using a track logger. At a few corners, they also unfurled a tape measure to check the width of the road and ensure the ID R could actually get round it. The tightest corner – Turn 88 in the perilously twisty section the team named the Layer Cake – has a total radius of around six metres. The team didn’t have to adjust the steering lock – although, after the first practice run, they did increase the level of power steering in the car to make life slightly easier for Dumas. 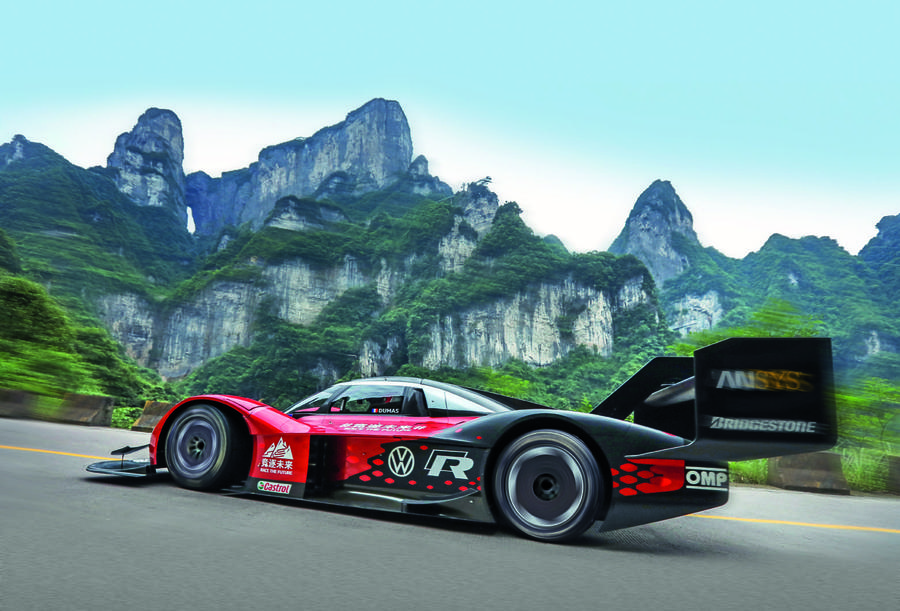 The team used the data information gathered from the site visit – and, in truth, plenty of guesswork – to settle on a base set-up. That included the big front and rear wings the ID R used at the high altitudes of Pikes Peak, rather than the far smaller wing (with drag reduction system) that was used for the Nürburgring and Goodwood. That choice was made due to the sheer volume of slow bends, although Demaison notes that the speeds were so slow the wings produced little downforce, and the ID R largely had to rely on mechanical grip.

The biggest problem was the road’s surface, comprised largely of concrete slabs joined together. Weathered by the elements and water regularly seeping from the mountain’s limestone rocks, and worn by the near-constant stream of buses traversing it, the surface offered Dumas precious little grip. The road has also been constantly patched, including on the seams where the concrete blocks join. “It really is like a rally,” says Dumas. “It’s a completely crazy road. But it’s very dirty and we were getting air over some of the bumps. Pikes Peak also has bumps but, compared to this, that’s a flat autobahn.”

Given the surface, the team’s focus during the practice runs was on raising the ridge height of the car so it didn’t bottom out, and softening the suspension in order to give Dumas more feel.

Another key focus was on the car’s braking: something Dumas did a lot of with 99 turns in under seven miles. The ID R was fitted with the same battery capacity it had at Pikes Peak and the Nürburgring, large enough to cover around 13 miles without worry. With the Tianmen road half that length, there wasn’t much need to recapture energy under braking, but the team did so to improve the braking feel. 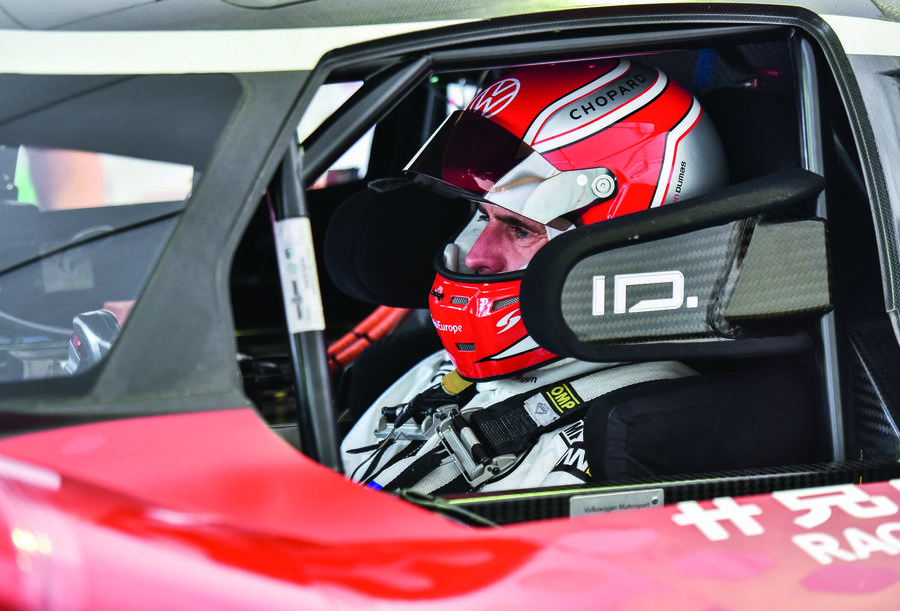 “At Pikes Peak, Romain could roll the car into corners a lot more, because they were faster and more open, but the sharp braking here needed a different approach,” explains Sven Smeets, VW’s motorsport boss. “In the beginning we put lots of regen on, and the car was actually braking too sharply, so we had to find the best balance.”

With the mountain still open to tourists, VW was very limited on practice time: after a shakedown on Saturday, Dumas completed two runs on Sunday, with a best time of around 8min 30sec.

Dumas had two sighting attempts before his record run – broadcast live on local TV – and with the track drier (the dense mountain foliage traps in water that tends to seep onto the road even when there hasn’t been rain) and his set-up tweaked, Dumas improved his time to 8min 06sec. “We’d improved a lot, and I thought then we could go below eight minutes,” says Dumas. That prompted him to take more risks, pushing even closer to the unforgiving sheer cliffs and concrete blocks lining the road. When he crossed the line with rear wheels slightly in the air, it was clear he was carrying more speed than before. How much more speed? That was revealed by the two officials from the local Chinese Athletics Association-backed notary office, who verified the time of 7min 38.585sec (recorded using a QX1000, timing equipment fans). “I definitely didn’t expect to go as fast as we did,” says Dumas. “Mind you, I’d like one or two more days here to see what we could really do.” What the team did do – and the real goal of coming here – was to gain publicity. As Dumas sprayed champagne and celebrated with the ID R parked at the foot of Tianmen Mountain’s 999 calf-busting steps, a horde of local journalists and curious tourists watched on. The ID offensive has truly begun in China.

But more than that, Smeets says the team learned even more about the ID R’s potential. “It’s been different,” he says. “It’s an impressive road, and it’s been a real challenge to try and conquer it in a prototype. We’ve learned an awful lot about the car, and about how we can improve it in the future.”

After a third major project in under four months, what that future is has yet to be decided. But Smeets says the firm has “plenty of ideas” – and the China spectacle has shown they no longer rely on established motorsport challenges. “This has opened up what we can do,” says Smeets.

If you’re making an insinuation about BEV range, there are plenty of people who have done Lands End to John o’Groats in an BEV, and a record time for doing so (unsure if this is official).

If you’re making an insinuation about BEV range, there are plenty of people who have done Lands End to John o’Groats in an BEV, and a record time for doing so (unsure if this is official).

. Thanks for the info, as regards a race, I wasn’t talking about a high speed race, I just thought a sort who can get there first, kind of like the races the did on Top gear a few years back, range was something that bothered me a while back, Range has improved, it’s just getting the infrastructure right that’s taking longer, would be interested to know what the BEV record from John o’groats to Landsend was, anyone know.....?