Running a Ferrari is an expensive business, especially if it goes wrong, but we look at a new scheme to quell such fears
Share
Open gallery
Close
Share story

Now, at last, I get the fuss about Ferraris. I’ve just driven my first manual example, a 360 Spider, on a favourite road. I’d assumed the gearbox, with its long indents, would be a chore and the clutch too heavy. Wrong: the sprung lever was perfectly aligned for the next shift and the clutch pleasantly light. The suspension would be stiff and the ride brittle, I reckoned. Wrong again: it was supple and comfortable. I had no doubts about the 3.6-litre V8 engine. It would howl viscerally as the revs soared to the 8500rpm redline. It did.

Driving the 360 was an incredible experience but equally incredible was the fact that, only an hour or so before, it had been on the garage equivalent of an operating table, separated from its wheels and many of its vital organs. Timing belts, brake and fuel lines, coolant hoses, fuel pumps, injector rails, power steering hoses, steering gaiters, O-rings by the dozen… Over the course of several days, all of these and more had been removed and renewed by two young Ferrari technicians at Dick Lovett, the official Ferrari dealer based in Swindon.

I’d arrived to witness the final stages of the operation and to discover why one qualified technician (Jack) and his able apprentice (James) would devote so many hours to an 18-year-old 360 Spider with 8000 miles on the clock that, to these eyes, looked immaculate. I didn’t have to wait long for the answer. On a trolley next to the car were some of its old parts. They included a short length of fuel hose. I squeezed it, forcing small cracks to open on the inner faces at each end. They were to be expected on a car of the 360’s age but, as Jack explained, if left to deteriorate further, they might cause the hose to rupture, allowing fuel to escape.

“We’re doing preventative maintenance,” he said. “It’s the kind of work that isn’t done during routine servicing. Oil, filters, plugs and brakes are all replaced at intervals but hoses, brake lines, fuel pumps and so on are replaced only when they fail. We’re changing them before they do.”

I know Ferrari owners have deep pockets but deep enough to pay for work that might or might not be necessary? In fact, the two techs were giving the 360 the Ferrari Premium treatment. Launched in 2019, it’s a preventative maintenance package that ensures older cars no longer protected by Ferrari’s New Power warranty, which covers cars up to their 15th year from registration, are thoroughly checked and brought up to scratch and, crucially, certified as such. 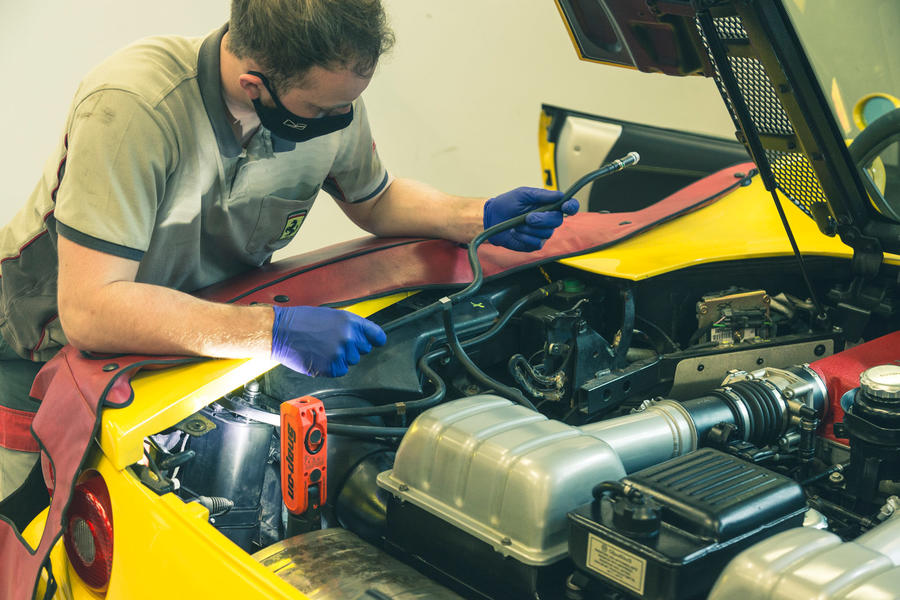 Premium focuses on the fuel, brake, cooling and steering systems and currently 13 cars – including the 360, 456, 550, 575, 612 Scaglietti, F430, 599 and Ferrari Enzo – qualify for the programme. Depending on their finances, customers can specify the full Premium pack of parts for all four systems or have it supplied and fitted stage by stage, paying as they go. For example, an owner might choose to have the braking system renewed during the car’s routine brake service, or the cooling system when the coolant is changed.

Whatever they decide, when choosing to give their car the Ferrari Premium treatment, owners must at the very least purchase the so-called starter pack of parts. Packs and prices differ between models but for the 360, for example, the starter pack comprises parts for the fuel system, including pumps, pipes and valves. Including VAT and labour, which varies between dealers, it costs around £4000 and the balance of the full Premium kit a further £8400. So far, more than 50 UK cars have joined the programme and 400 across Europe.

In addition to Ferrari Premium, there is a programme for cars aged 20 years and older called Ferrari Classiche. Named after the department at Maranello that checks and authenticates classic Ferraris, the process begins with an inspection by a participating Ferrari dealer in the UK. They examine the car from end to end, paying special attention to its originality, and back up their report with photographs. This material is sent to Ferrari Classiche for checking and approval. Successful cars receive a certificate confirming the car’s condition and originality, plus a large, leather-bound document wallet filled with the supporting evidence. For rare Ferraris especially, Classiche is a valuable asset that can enhance a car’s value.

Like Ferrari Premium, the cost of Classiche varies from model to model. At its cheapest, it costs ¤6100 including VAT (the factory has to be paid separately), which is about £5215 at current exchange rates, plus the UK dealer inspection charge of £1200 including VAT. Models attracting this charge include the 360 and 550. At its most expensive, Classiche approval costs ¤18,300 (about £15,645) plus the dealer inspection charge. Only the rarest models – for example, a 1958 250 TR – attract this higher rate.

Obviously, for the owner of something such as a high-mileage 360 that’s been around the block a few times, Classiche will hold little appeal but if, like the example I drove, it’s a low-mileage car in mint condition, it would be worth considering and might give the car an edge in the market. As we’ve seen, though, it comes with a hefty price – or at least it does if the car hasn’t been through the Premium programme first. If it has been, then remarkably only the £1200 UK dealer inspection fee is charged.

That’s some saving, but ignoring Classiche, is Premium on its own worth the substantial outlay? To answer that, you must suspend traditional concepts of price and value for money. Fact: Ferraris are special cars that cost a lot to own and maintain. Even the smallest problems can be expensive to put right, but Ferrari Premium aims to stop them arising in the first place.

The owner who intends to keep their car for some years will benefit most from it having the Premium treatment, and if they use a Ferrari dealer charging a discounted hourly labour rate for classic models (we found one charging £102 compared with £162 elsewhere), the cost comes down quite considerably. Job done, its owner is free to drive their 360, 456, 550 et al in the manner Ferrari intended.

Why old Ferraris never wear out? 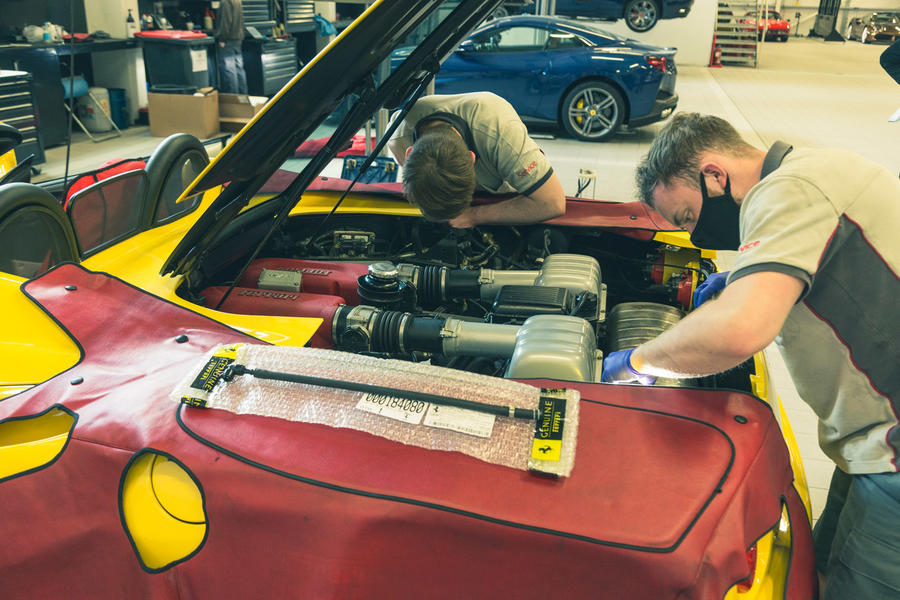 The Ferrari Premium programme is only as good as the technicians implementing it. Dick Lovett, the Swindon-based Ferrari dealer where we saw the programme in action, is fortunate to have two of the country’s brightest and youngest. Jack joined as an apprentice eight years ago and qualified after four years of training. James, his colleague, entered the apprenticeship scheme 18 months ago.

The 360 Spider we drove is the third car Jack has put through the full programme. Both techs like doing it for the experience it gives them of older Ferraris, as well as the chance to challenge themselves by going beyond routine service work.

It’s been a solid week’s work, as Jack explains. “We’ve replaced most of the major ancillaries but to do so has often involved some major dismantling. For example, we had to remove the fuel tank, which meant removing the gearbox first. It’s worth it, though. Premium ensures these cars never wear out and instead can be enjoyed for years to come.”

Having owned several classic (aged) Ferraris and Porsches, I would strongly recommend going for Porsche rather than anything italian, unless you don't plan to drive your car and simple want to admire its beauty in your garage or at a rare outing to a car show. Classic Porsches cost less than half to maintain when compared to Ferraris of the same era and, if well kept, will resell for similar prices. Also, Porsches are genuinely usable and far less fragile than any italian car. What Porsches do look are the evocative engine sounds that older Ferraris produce, unless you're really loaded and can afford a Carrera GT.

Yes, I sort of agree, we all have a Car we'd like to have or have owned,but, by definition, it's still just transport,but, also, it's how you get there, what kind of thrill, experience it gives you, and I guess your pride and joy hasn't chucked some huge bills at you, which I'm glad,but, you can't say they're cheap to run.

I have previously owned a 348 TS, and currently own a 328 GTS, and they have both been far more than: "Just a car" or: "Just transport", not only to myself as an owner, but also to others who have seen my cars.

Now that's a 32 year old car that can still generate the same level of excitement in a youngster, that I remember I had as a 9 year old, when I saw my first Ferrari (a brand new red 308 GTS), back in 1979.

On seeing either of the Ferrari's I've owned, people have reacted as though they've seen a Unicorn!

When people find out I own a Ferrari, they're amazed! - It's as if they've found out I own the winged horse Pegasus!

I'm not rich, I'm just a factory worker who has saved up over many years, to fulfil a childhood dream.

And that's what a Ferrari is to many, many people: It's a dream, it's a fantasy, it's a mythical machine, it's a Legend on the road - It's so much more than: "Just a car" or: "Just transport"