9
Is this V8-engined 2+2 coupé a sports car or a GT? A wet winter’s day on difficult English roads provides an interesting answer
Open gallery
Close

The problem with Ferrari launches is that hacks have to try doubly hard to remain objective.

Usually held in northern Italy, often at and around the factory, they treat you to superb and almost-always dry roads, the legendary Fiorano test track and, as if that weren’t sufficient, dinner at a restaurant called Montana, whose pasta alone constitutes reason enough to get on the plane. It’s hard not to feel at least tolerably well disposed towards a car presented in such circumstances.

Well, this one was going to be different. A diary clash meant I had to skip the Roma main event in sun-scorched Italy back in August, so if we were to meet at all in 2020, it would be in December in southeast England, where the roads could be guaranteed to be busy, the weather as wet as it was cold and lunch a sandwich in a bag.

Actually, I wasn’t sad at all. Like most people, I’m not knocked out by the idea of spending a couple of hours at 35,000ft in a thin aluminium tube in the company of a few hundred strangers right now, and the prospect of being introduced to a brand-new Ferrari in the all too real world was rather compelling: if the Roma could find a way of working here, it would work pretty much anywhere. This was an away game for Ferrari, and I wondered if it would show.

Around Goodwood, where I drove it for the very first time, it most certainly did. Any rear-drive car with over 600bhp is likely to keep you busy on a soaking, not-far-off-freezing track, but when that track is one that combines fast and fear like no other in the land, you had better have your wits about you. Or, alternatively, your safety systems on.

These days, Ferrari’s traction and stability controls are as good as you’ll find, and if you keep the manettino controller in either Wet or Comfort mode, that’s what you’ll find out: the Roma circulates the track very cleanly and rather slowly, the electronics anticipating slip and shutting it down before it has a chance to develop. In Sport mode, it’s rather unsatisfactory, because it suggests it’s going to allow the car to yaw a little but then doesn’t allow it.

So you put it into Race mode and are instantly busier than you would ever want to be in a car and on a track like this. In extremis, it did seem able to step in and save you from yourself, but the earth banks are very close at Goodwood and wet grass so slippery that once you’ve left the track, you seem to accelerate towards the scene of your accident, so I didn’t pursue the matter further.

Once I had discovered that it would spin its wheels in fifth gear, I concluded that there wasn’t much more to be learned here other than how one might reduce by one the global Roma population, so I gave up the track work and headed out onto the public road instead.

And here, once I had realised that you need to press the manettino to access the Bumpy Road mode so essential to progress on British back roads, I continued my search for a still unanswered question. 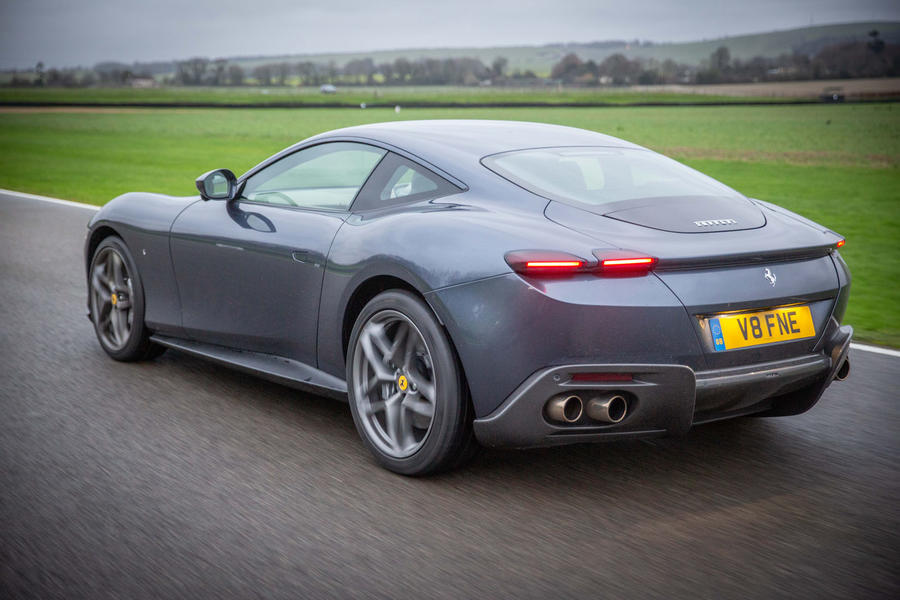 What I most wished to discover was where on the spectrum between an obvious grand tourer like the Bentley Continental GT and a clear sports car (despite its name) like the McLaren GT the Roma lay. The answer took its time in arriving.

On the one hand, this is a front-engined 2+2 and, since the GTC4 Lusso got canned, the only Ferrari coupé so configured. So there’s a clear role for it filling in as Maranello’s mile-muncher until the car it doesn’t like calling an SUV arrives in 2023. So it’s a GT, right?

Well, maybe. It is, after all, a close relative of the Portofino, the most middle-of-the-road car in the Ferrari stable. The interior is quite luxuriously appointed but that, of course, also depends sizeably on how many additional tens of thousands you spend on optional extras, something you can count on being encouraged to do. There’s always fun to be had here, considering who pays £1296 to have his or her brake calipers painted black (what colour are they as standard?) or £4416 for ventilated front seats, £2400 for Apple CarPlay (yes, really), £4512 for a brace of weekend bags or, my perennial favourite, £3360 to have the boot trimmed in carbonfibre.

There are those rear seats to consider, too: it’s not that Ferrari has never done a 2+2 sports car, rather that it did one once (remember the Bertone-bodied 308 GT4 of 1974, the last Ferrari to be badged a Dino?) and decided swiftly thereafter never to do one again. The Mondial was far softer and more stodgy and all the others have been full-sized cars with V12 power, like the 456, 612 Scaglietti, FF and GTC4 Lusso (although, yes, they did use the V8 in the Lusso, too). Is the Roma really to reverse that trend?

It seems not. The driving environment is exceptionally user-friendly, at least in theory. I concede that the instrument pack comes direct from the curious SF90 Stradale, but I think it looks more suited to these more suave surroundings. And it’s a marvel and quite un-Ferrari-like. While the instrument pack of, say, the F8 Tributo, is actually pretty simple in appearance, because the supporting backstage architecture dates back to the dawn of the 458 Italia, yet infernally complicated to operate for much the same reason, the Roma’s is quite the reverse.

You can be dazzled, even cowed, by the sheer complexity of the ultra-high-definition display, but its operation is entirely logical, intuitive even. If Ferrari can get the haptics of the touchpads that control it to work properly, it will be a new level for this kind of car. Even as it is, and despite tuition from the man from Ferrari on how exactly to draw one’s digit across the surface of the pad, it was still a hit-and-miss affair on the car I drove. Or perhaps that should be a gentle sweep and miss. I’m told that Ferrari is working on it.

All of which makes it quite tempting on such a dark, drizzling day just to chill out in the Roma, having already concluded that its role in life is evident from its sleek appearance, relaxed demeanour and historical precedent. Tempting, but a mistake. Because the Roma does that other thing, too: the Ferrari thing. The thing that makes you set an alarm for 3am because who would want to sleep when that’s outside?

You don’t even need to think about the manettino setting, because Sport, so unsatisfactory on the track, is perfect for someone looking to drive a Roma with some purpose on even a wet public road.

The only real disappointment is that the car is short of traction in such conditions, although I spoke to someone who knows who tells me that the car is quite tyre-sensitive and that Michelin’s Pilot 4S boot is a vast improvement on the Pirelli P Zero rubber fitted to the car I drove. But so long as you’re just a little sensitive with the throttle, the Roma will surprise and delight.

Surprises include it feeling far more compact than it actually is. This may be a small Ferrari, but it’s a big car, yet you can place it perfectly. I was surprised by the steering, too, which takes another step back from Ferrari’s once super-aggressive off-centre response, which remains the worst thing about the F8 Tributo.

The performance raises eyebrows as well. By Ferrari standards, this isn’t a particularly powerful car, nor is it by any standards conspicuously light, but it still feels rapid enough to make you wonder who in their right mind could ever feel short-changed by this level of acceleration.

And the delight was simply the way it gets down the road. Ferraris have long been famed for their engines, but I’m increasingly persuaded that their true geniuses work in chassis development. It was so fast on frankly some of the most difficult roads a car like this will encounter, yet so deft and reassuring.

The new eight-speed gearbox seems unimprovable in the context of dual-clutch transmissions and the way Ferrari has managed the torque delivery, with a different map for every single gear up to seventh, provides magical power delivery for a twin-turbo engine. Its gruff note alone, so suited to a mid-engined application, seems out of place here. 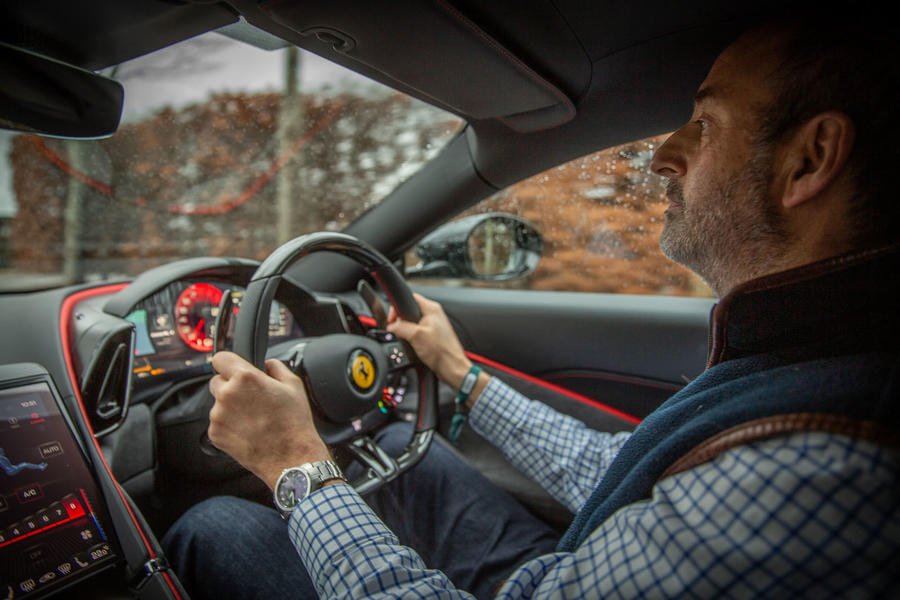 So, sports car or GT? The only answer is that the Roma is a master of both.

It’s actually a more imperfect machine than I had expected from all I had read, but perhaps I have Goodwood, West Sussex and December weather to thank for helping me find flaws that might otherwise have been harder to discern. But with abilities both so broad and so deep contained as they are in a car that looks so good, its failings seem slight by comparison.

It’s a car with rivals from Bentley to McLaren, with Mercedes-AMG, Porsche and Aston Martin between. I hope they realise what a fight they have on their hands. 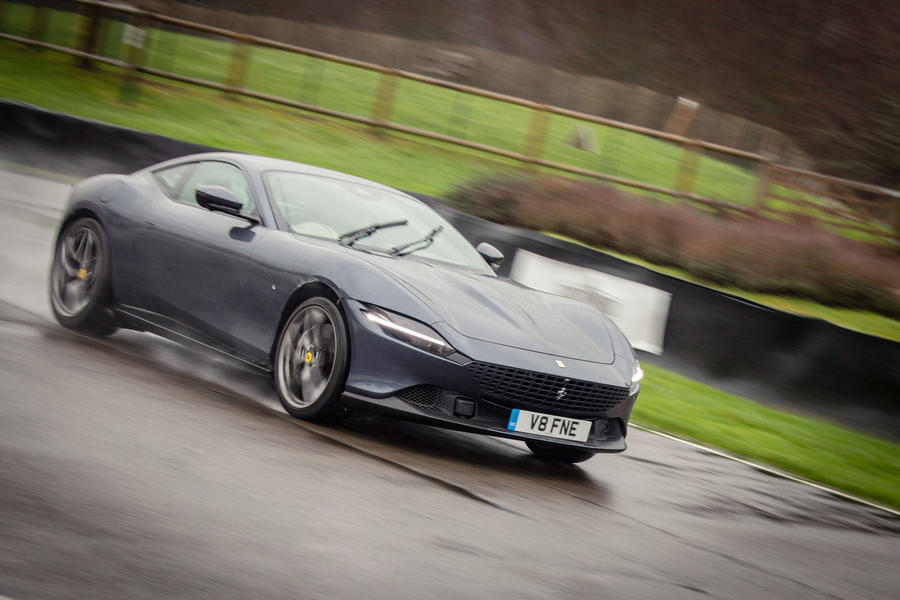 What's missing from this review is detail on the GT aspect of the brief. What's the rolling refinement like? How practical is it? Range? Ferrari seem to have made an every day Ferrari, but would it drive you mad after a couple of months of daily use?

When as a journalist you are not alllowed to speak your mind - don't post a review.