BACK TO ALL NEWS
Currently reading: A fine balance: meeting the car technicians blending old skills with new
UP NEXT
Fisker goes radical with Pear EV SUV

Does old-school spannering still have a place in the modern workshop? These techs are keeping yesterday’s skills alive while mastering today’s motors
Open gallery
Close

It’s beginning to sound like Monty Python’s Four Yorkshiremen sketch. But instead of recalling his days sucking tea from a damp cloth, John Kershaw, 56, a master technician who works at Volvo Cars Shrewsbury, is holding forth on one of this favourite cars, a Volvo P1800, an example of which is parked alongside a shiny new Volvo XC40 here at the firm's high-tech training centre in Daventry.

“Back in the day, when a car was sick, you used your eyes and ears to tell you what the problem was, rather than relying on an ECU and a computer to tell you,” he says somewhat wistfully.

“There were no fancy electronics and no fuel injection,” he continues. “Balancing the carbs, for example, was an art. You’d do each in turn, listening like a hawk to the beat of the engine. You had to do that every 3000 miles. You had to change the points and plugs at the same service, too; then, every 25,000 miles, you changed the gearbox and diff oils. 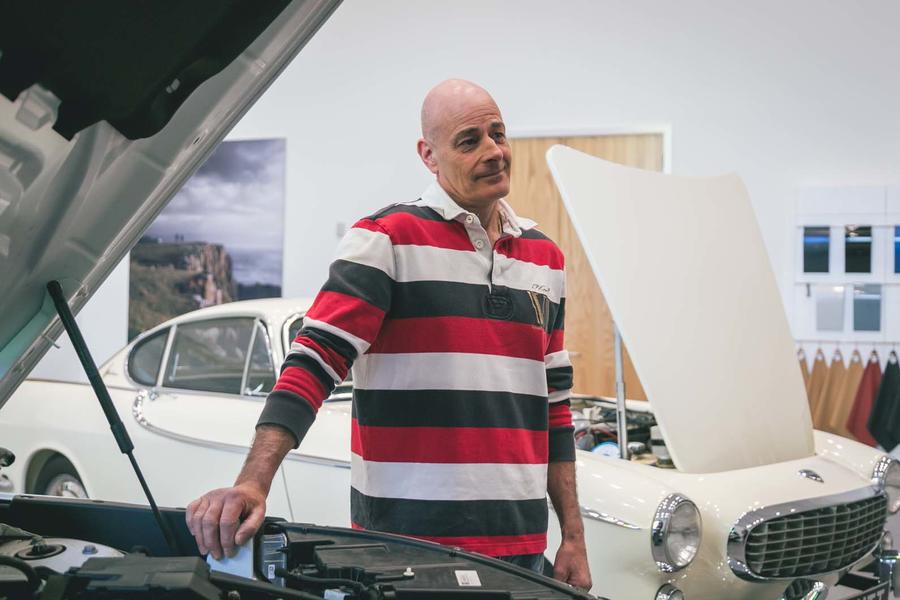 “If the dynamo wasn’t charging you’d strip it down and replace the bushes. We were proper mechanics.”

Listening patiently to Kershaw is Jason Ratcliffe, also a Volvo master tech (he works at Volvo Cars Warrington) but, remarkably, aged only 24. He resists the temptation to respond with his own ‘when I were a lad’ anecdotes, not only because he still is one but also because, in truth, both techs know the game has moved on and, in most ways, for the better.

“We’re technicians now, not mechanics,” Ratcliffe explains. “We have to be skilled in so many areas, from basic mechanics to complex electronics and computer processes. Back in the days of the P1800, a cloud of smoke, a loud rattle or a misfire were the signs that a car was in trouble, but with a modern one it’s not that obvious. 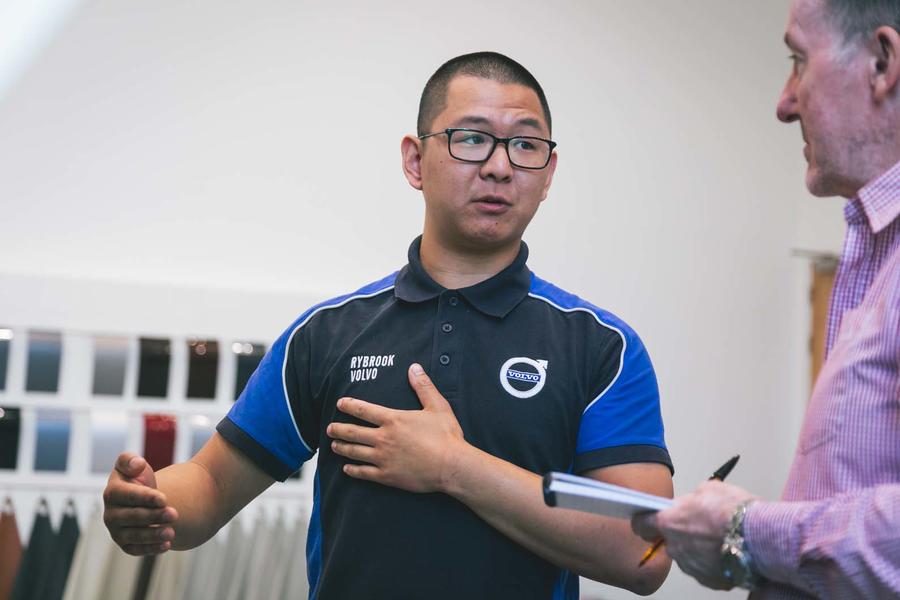 “To find out what’s wrong, sometimes you have to sit down with the customer to understand exactly what they’re experiencing, rather like a doctor with their patient. You have to tease out the precise nature of the problem: when it occurred, what the car was doing, what systems were running and so on.”

The P1800 is from Volvo’s heritage collection. I’m surprised to learn that the first ones were produced not in Gothenburg but in West Bromwich, by Jensen. Not only that, but the shells were fabricated by Pressed Steel in Linwood, Glasgow. Unfortunately, though, quality wasn’t up to scratch, and in 1963 Volvo brought production of the model in-house, renaming it the 1800S in the process.

I suspect the quality of this restored 1800 is rather better than it was first time around. Kershaw raises its unblemished bonnet and marvels at the accessibility of the engine’s brilliantly polished air cleaners.

“They were so easy to get at,” he says. “You took them off and then you could dismantle the carbs.” He points to the distributor. 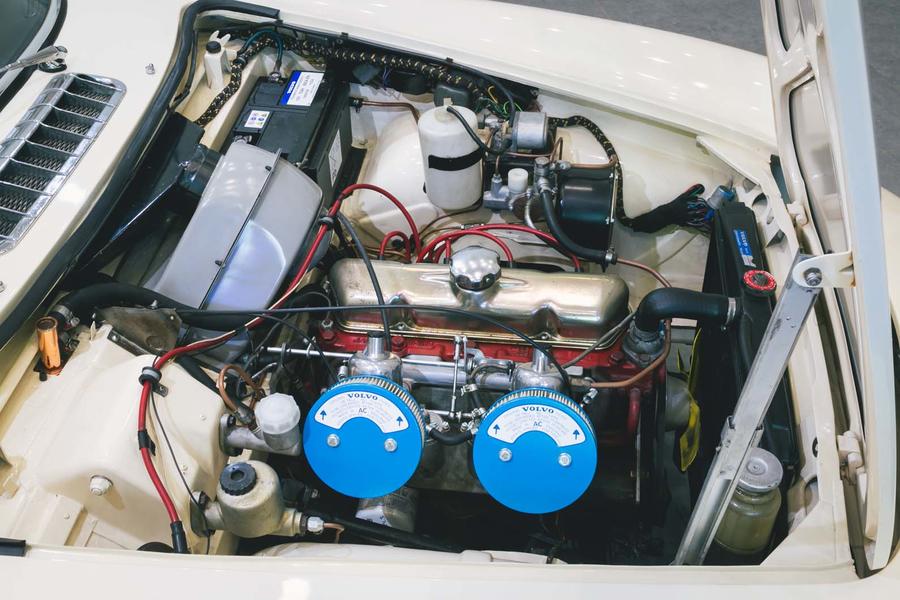 “Then, when you’d balanced the carbs and cleaned the filters, you checked the timing, which you could advance or retard by simply taking the cap off the distributor and adjusting its base plate.”

“Even with something vastly more sophisticated, such as the XC40,” he says, “a tech of John’s generation can spot when it’s playing up. All the ECU is doing is managing the situation.”

In contrast to the 1800’s engine bay, the XC40’s acres of plastic shroud may as well bear a sign saying ‘Do not enter’. Even if you did, you’d have a job getting to anything, all the while running the risk of inadvertently disturbing some vital connection. 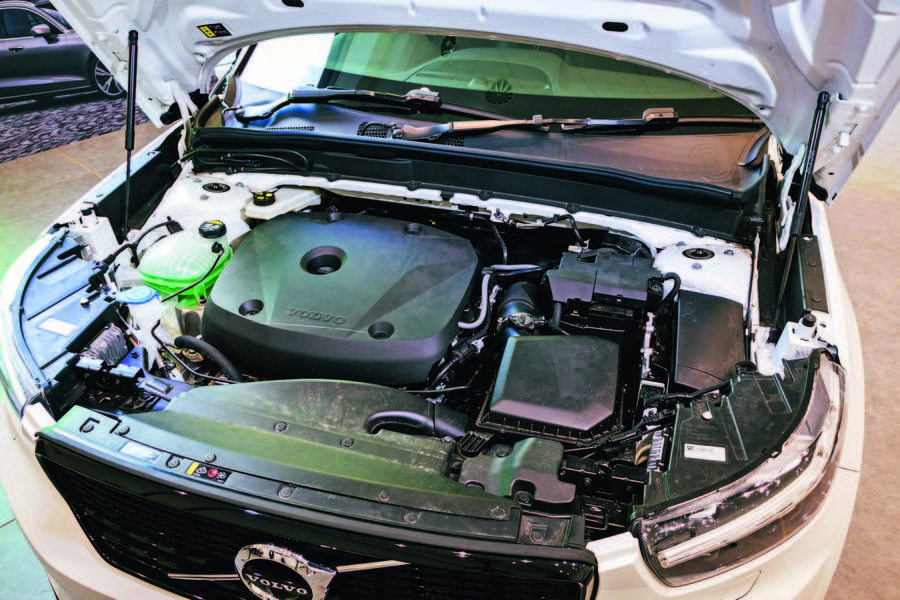 I ask Ratcliffe where the reward is in working on a modern engine like this that can all but change its own oil.

“For me, it’s in diagnosing a fault that has not only got the customer in a head spin but which has also confounded other techs,” he replies. “Intermittent faults take the longest. Sometimes they’re caused by the owner misusing the car or not understanding it, but I’ve also had to deal with situations such as discovering that stray hairs from a cat that had been sleeping under the bonnet had unplugged a connector. On another occasion, a rodent had partly chewed through an electrical cable, creating a short circuit.”

With the XC40’s engine stripped of its plastic shrouds, I’ve no doubt that it and the 1800’s motor would look vaguely similar. So, the former’s ECU, injection system and turbocharger aside, what do the two master techs believe is the single biggest thing separating the XC40’s engine from that of the P1800? 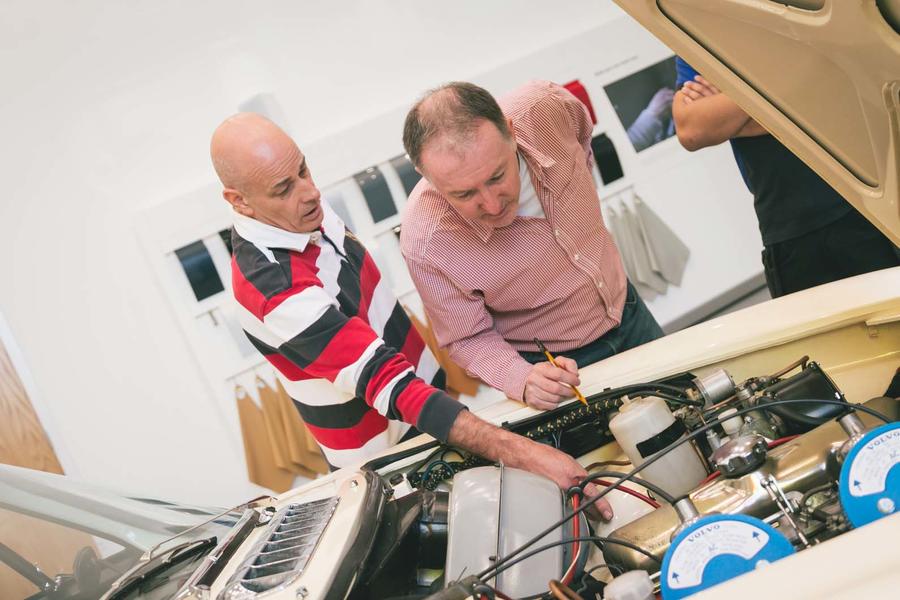 “Its sensors,” says Ratcliffe, without hesitation. “They’re the XC40’s eyes and ears, just as John’s generation of mechanics were the eyes and ears of cars such as the 1800. One of the smartest sensors is the air mass sensor that measures air flow and temperature. It’s key to controlling the air/fuel ratio.”

Kershaw agrees. “Sensors have done us out of a job!” he laughs. “Thanks to them, there’s no need for us to adjust the idle or mixture any more. Based on what they feed back to the ECU, it’s done automatically.”

Both admit that with a modern car, the average customer rarely notices any difference in the way it behaves before and after a service.

“I miss that ability to transform a dull engine,” says Kershaw. “Now, most of the time they all run sweetly.”

Of course, for both techs the elephant in the room is a pure electric Volvo. Ratcliffe admits he’ll miss the internal combustion engine when it’s finally phased out, but he is already qualified to work on the electrical systems fitted to Volvo’s petrol-electric hybrid models.

Kershaw, meanwhile, says whatever happens he’ll continue to get his kicks from his own classic Volvo, a 1993 850: “It was the future once, just as one day they’ll say the same about this XC40. It’s progress, and you can’t stop that.” As cars become more sophisticated, requiring skills not only in traditional engineering but also in computers, electronics and electric drive and autonomous systems, Jason Ratcliffe is exactly the kind of bright, ambitious young person the industry is keen to recruit.

“I left school at 16 not quite sure what I wanted to do,” he says. “I was being encouraged to study for university but thought I’d like to do an engineering apprenticeship instead, which is how I came to join Volvo.” 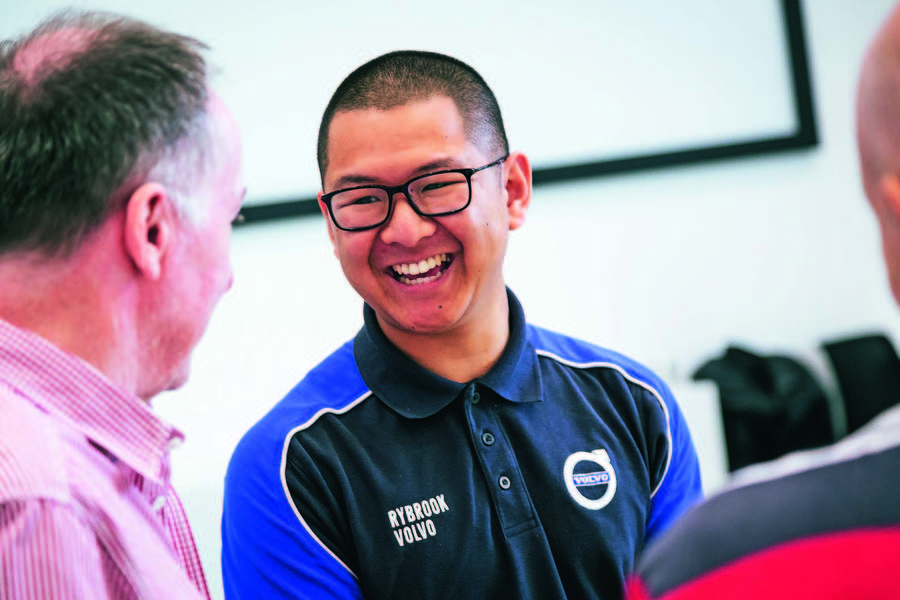 Now, eight years later and aged 24, Ratcliffe is a master technician. This is a remarkable achievement for one so young and a highly prized qualification among vehicle technicians.

However, it’s one that can be withdrawn from him, too, and to hang on to it Ratcliffe must attend at least three courses each year in new technologies and systems. Among them is electrification. He says: “We’ve been learning to strip EV battery packs and replace cells which, of course, are live. It’s highly skilled work and exactly the kind of thing I hoped for from a career with Volvo.”

Safe in their hands: talking to Volvo's design team

James Ruppert: the future of the banger is in danger​

The most complicated cars ever made​

Tycoon , so whats so nasty

Tycoon , so whats so nasty about its interior then. Update Happy Wheels apk online. All essentials are there ,its neat and tidy in there to my eyes .What would change then ?

Also good to see/read that as

My Dad was a Volvo technician, long since retired from the motor trade, and he used to frequent Daventry for training on all the new cars and systems, he always held Volvo in high opinion for the way it treated it's staff and customers though he always said it was worse under fords pag.

Well, that was interesting, nice to get opinions from both sides of the Track.