BACK TO ALL NEWS
Currently reading: Dakar Rally: How to survive the world's toughest race
UP NEXT
New 2022 Honda Civic hatchback goes hybrid-only

To win the Dakar Rally, you need to tame the desert. Giniel de Villiers uses his Toyota Hilux to show us how it's done
Share
Open gallery
Close
Share story

The Dakar Rally has long stood at the pinnacle of off-road motorsport challenges, earning a reputation as the world’s toughest motor race, challenged only by the Isle of Man TT for brutality and the World Rally Championship for its test of endurance.

These days, the threat of terrorism has driven it from Africa to South America, but it is no less of a challenge for it. This year’s event began on 6 January and concluded on 20 January, covering 5600 miles – half of them at competitive speeds – from Peru, via Bolivia and into Argentina. The longest day involved more than 550 miles of driving, the longest competitive section was 310 miles. Competitors had just one rest day.

The event produces a raft of iconic images every year, but this year one in particular has stood out, of South Africa’s Giniel de Villiers, a winner of the event in 2009, and German co-driver Dirk von Zitzewitz bursting through a sand dune in their Toyota Gazoo Racing SA Hilux. Here, in de Villier’s own words, is the story of the picture. 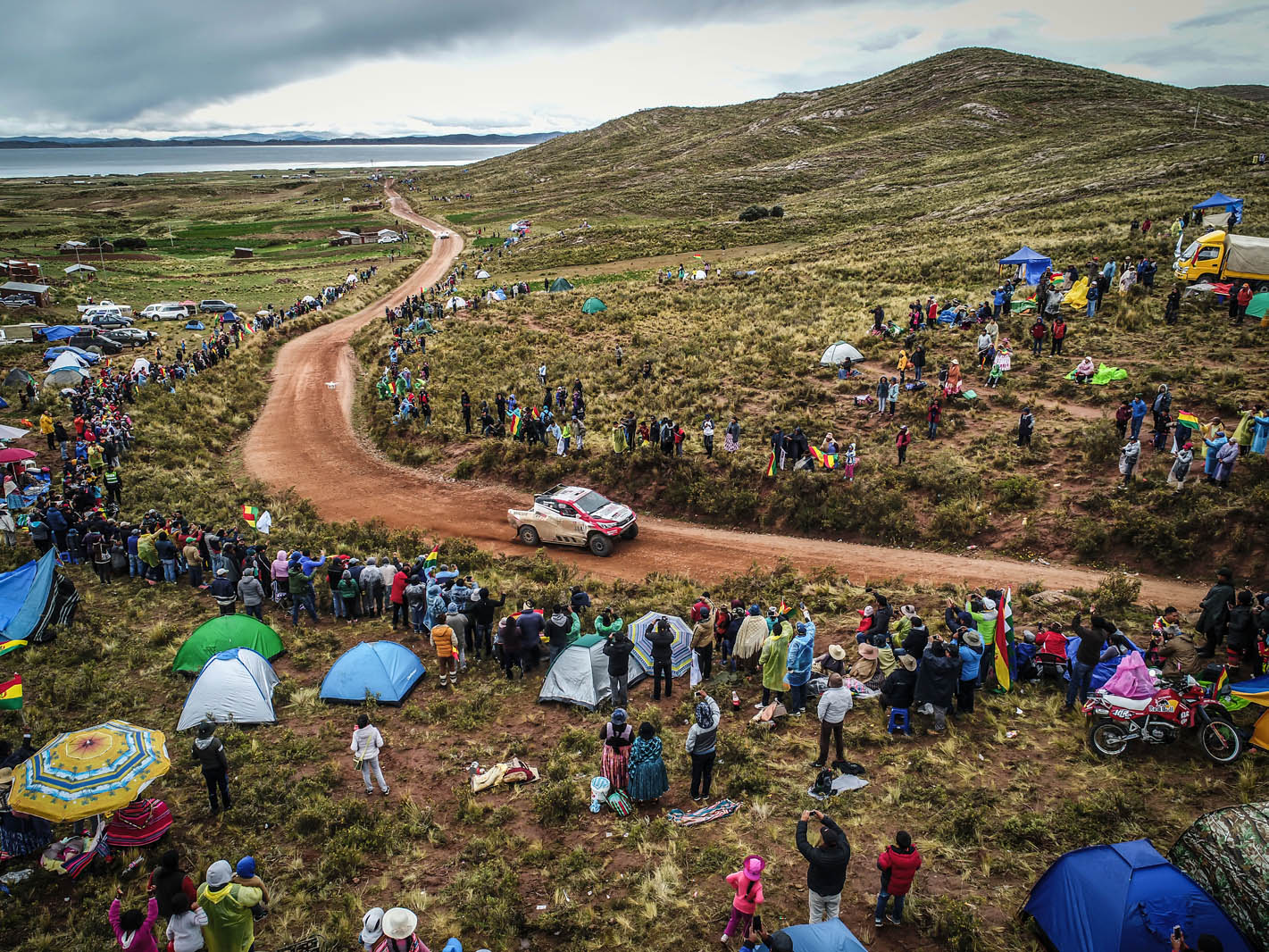 “We drive through the dunes all the time. We call it surfing, because the key is to stay on top of them, not sink in. All dunes are different sizes, different shapes, some have holes in, some don’t. In this particular shot we went through a hole and then up the other side again. The Hilux caught some sand on its nose and shot it forwards, creating the cloud that the photo caught us in. In the car, in truth we hardly noticed – this sort of thing happens all the time.”

“There’s a big difference between being in a dust cloud and not being able to see. In the car all your senses are heightened. It’s intense. You listen to the engine, your navigator and so on. If you’ve driven on the road with your wife telling you to slow down, you’ll relate!

“A dust cloud is a brief moment, but if you are following another car, for instance, you just can’t see. You stop or take another route. The risks are too big to drive blind. There are big holes, big rocks, cliffs. If you can’t see, you can’t go.” 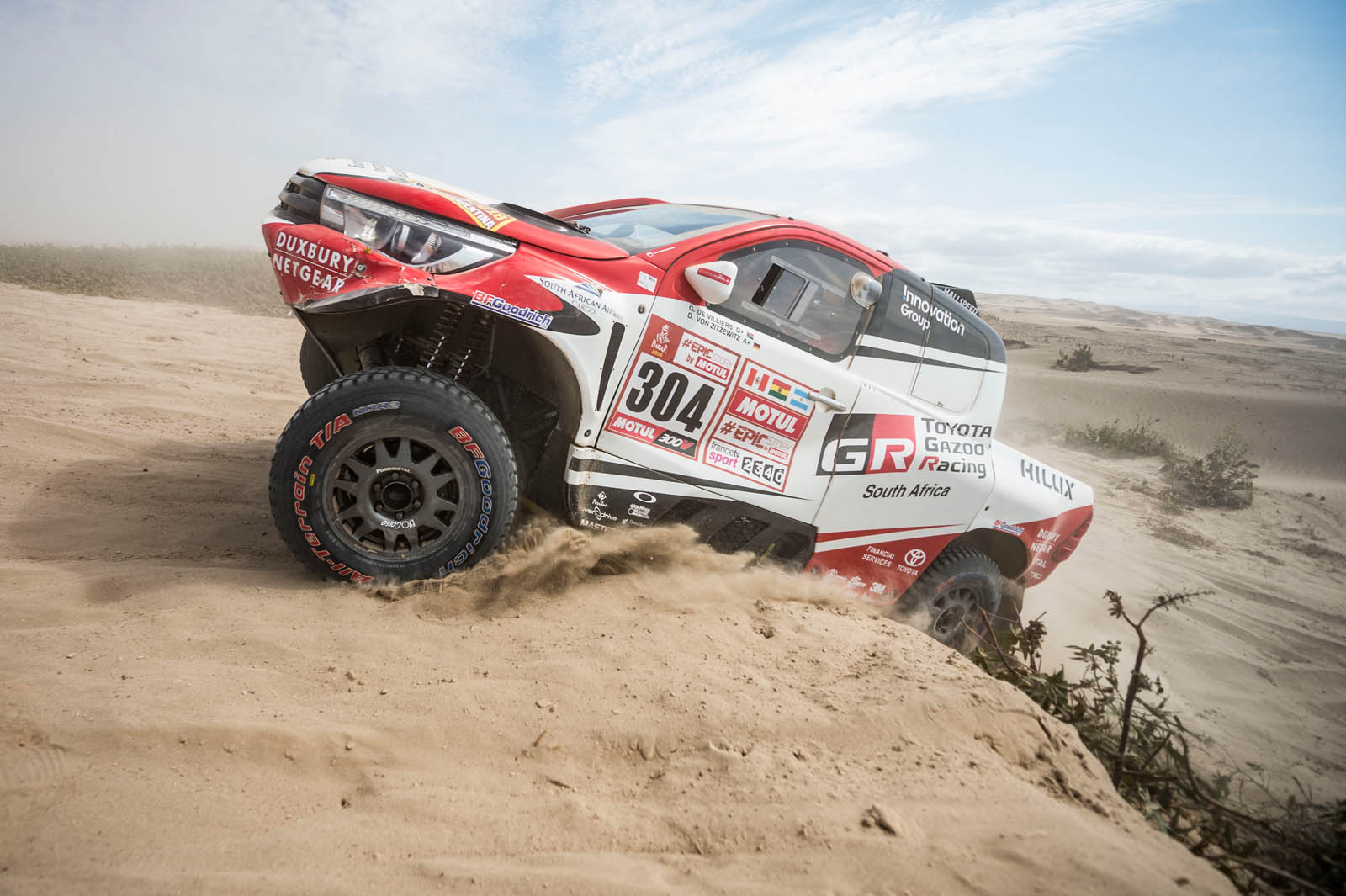 THE LURE OF THE WILD:

“The Dakar is incredibly tough. A normal person would probably dream of doing it once, do it, and then never come back. But if you do well one day – especially on a tough day – well, it’s a great feeling. We come back for the adventure and the challenge.

“We just accept the danger. There’s a lot of risk. You do drive blind sometimes, you do take chances and push limits. I’ve never talked to Dirk about it. Life is full of risks, and danger is just a part of it.”

“I once drove a 420-mile stage on the Dakar. That one took 11 hours to finish. Temperatures in the cockpit were 60degC, the air-con couldn’t cope.

“Then, even in that heat, if you drink a lot you won’t just sweat it out. We can’t stop for a toilet break, and you don’t want a full bladder, so we wear a nappy. The mechanics wouldn’t thank us for just going in the seat...

“When you’re moving so fast, for so long, crashing through dunes and the like, the heat just builds up. You just psyche yourself up and keep moving. If you’re moving, you’re getting closer to the finish.”