BACK TO ALL NEWS
Currently reading: Britain's Best Driver's Car 2019: The final three
UP NEXT
GSR2: The new rules making cars safer but more expensive

Can the Atom or the 911 depose our reigning champion? We return to the road to find out
Open gallery
Close

There is a palpable sense of tension in the room as Matt Saunders taps away at the ageing Dell, each keystroke entering one of the judges’ scores, and thus sealing the fate of another of our contenders. We’d hammered out the hard miles on the road and pounded around the picturesque roller-coaster of Tarmac that is Anglesey Circuit, but now we are going to find out exactly which cars made the grade in 2019.

I’m not going to reveal our champion here (be patient, it’s coming) but, if you’ve read this far, you already know the shape of our top three. However, what you won’t know (unless you’ve flicked ahead to read the scores, spoilsport) is just how closely marked our triumphant trio are, and how far ahead of the rest they finished.

To give you an idea of how tight it is at the top, a mere nine points separate first from third, but a gap of 12 points between the bottom of the podium and fourth place. What’s more, all but two of our judges put this trio in their own top three, and those who didn’t placed two of them in their personal triumvirate. While in previous years you could have had any one of four or five cars forcing their way onto the podium, in 2019 the result was emphatic. 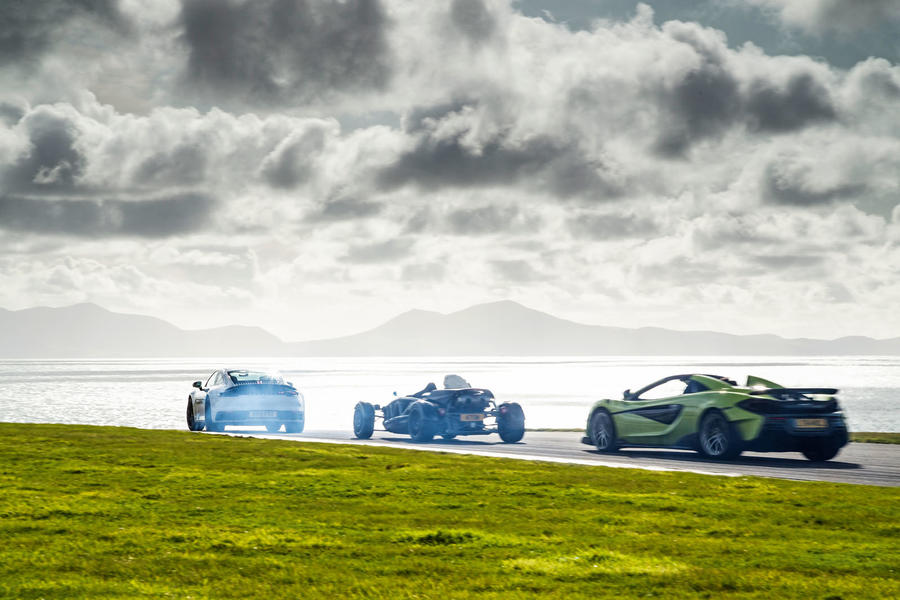 Leading the charge is last year’s winner, the magnificent McLaren 600LT, back for another bite of the cherry and the chance to join an elite band of back-to-back victors. But not if the astonishing Ariel Atom 4 has anything to do with it. Previous versions of the scintillating spaceframed sportster from Somerset have come close, but none had the breadth of ability of this latest offering. And then there’s the Porsche 911, the evergreen rear-engined machine still hitting high notes after six decades.

We’ll start with the McLaren, however, because, as our defending champ, it’s the known quantity – the one with the target painted large on its aerodynamically honed rump. What’s immediately clear is that the passing of 12 months hasn’t diminished the Woking Wonder’s appeal. Andrew Frankel speaks for most of us when summing up the 600LT: “Just so sensationally good everywhere,” he muses. “When cars are this fast, it’s all about confidence and I’m as confident driving this fast as I am the Mégane. Some might say it lacks character as a result, but for me it’s as good this year as last.” 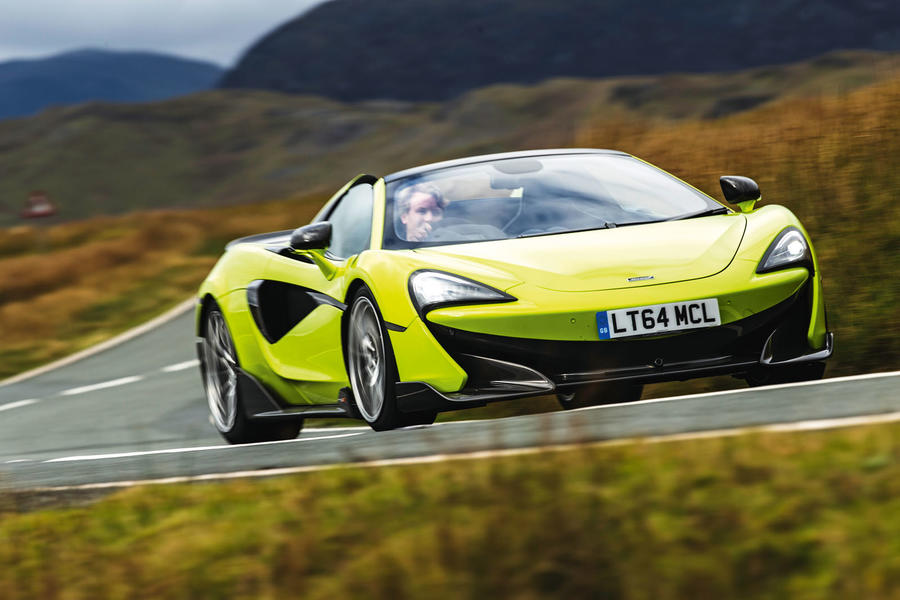 As you’d expect, the Macca makes most sense on the track – this is a car built by a company steeped in motorsport tradition, after all. Around Anglesey, the 600LT is a car that rewards precision and commitment, getting better the harder you push it. With temperature in the tyres, there’s tons of turn-in bite, while the car’s ability to cope simultaneously with heavy braking and steering input leaves you slack-jawed in amazement.

Sure, it’s not as expressive as some here, or as willing to play the apex acrobat, but it’s a more engaging and natural companion than some of the firm’s more aloof models. The hydraulically assisted steering is rich with feedback, while the smooth transition from slip to grip is faithfully broadcast to your bum and fingertips.

You do need to pedal it the way McLaren intended to get the best results, however, as Matt Prior points out: “It’s great as long as you drive it its way, but I don’t always like its way. Understeer, turbo lag, then lots of oversteer. So it’s pushy often and loose sometimes. So close to brilliance.”

On the road, it’s the on/off boostiness of the industrialsounding motor that’s the frustration but, in all other respects, the 600LT manages to deliver sensorial rewards even at sane speeds (whisper it, but the Spider’s drop-top configuration plays its part here, literally opening you up to even more on-the-move sensations). And then there’s the mind-boggling damping that’s both supple and supremely controlled – this is a true blue-blooded supercar, but one that’s easy to live with. Almost as hassle-free as the 911. 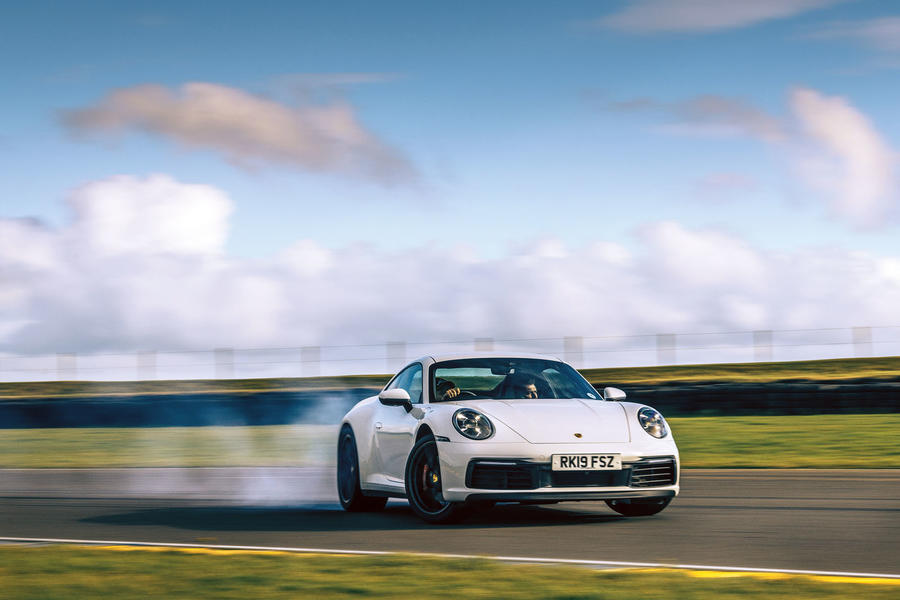 In many respects, it’s a surprise to see the Porsche finishing so high up, particularly in ‘ordinary’ Carrera S guise, and especially after it initially succumbed to the critical rite of passage that awaits every all-new 911 – namely that it’s now too big and that it’s been stripped of yet another layer of driver involvement. As Saunders noted: “A very, very good sports car by just about any reasonable measure, but it felt a little bit larger than I’d have liked it to on the road, and didn’t quite communicate as clearly or vividly at normal speeds.”

He’s right, of course – there is fractionally less chatter through the helm than before – but as Prior points out: “It steers with a really nice oily slickness.” It’s not the quickest rack in the world, but it delivers a delicious rate of response, allowing you to load up the front tyres just so, while the optional rear steer adds twinkle-toes agility. And if the 444bhp flat six doesn’t sing as loudly and sweetly as before, it makes up for it with a hefty punch (the near-seamless eight-speed PDK is pretty sensational too) that makes you wonder why you’d ever need the extra muscle of the Turbo or Porsche Turbo S.

Yet it’s at the circuit that the 911 earns its greatest plaudits. “With its blend of traction and adjustability, it’s amazingly adept,” suggests Richard Lane after one of many, many forays around Anglesey in the 911. Frankel is equally effusive, and particularly impressed at how a road-biased 911 bests the allegedly track-hardened Cayman: “Less understeer, more easily accessible and controllable oversteer. And all on standard street tyres. Very, very little not to like here.”

The harder you push it, the more it rewards – the thrills increasing in proportion to the loads being put through the suspension. The 911 gives you options too – plenty of them. If you want to drive a nice and neat game of ‘hunt the apex’, then the grippy, stable and precise Porsche will happily oblige. You fancy something a little looser? With the stability switched off, the four-wheel-steered Carrera S can be backed into almost any corner and oversteer all the way from entry to exit. Yes, it’s a bit of a hooligan, but it demonstrates the 911’s impressively wide operating bandwidth. 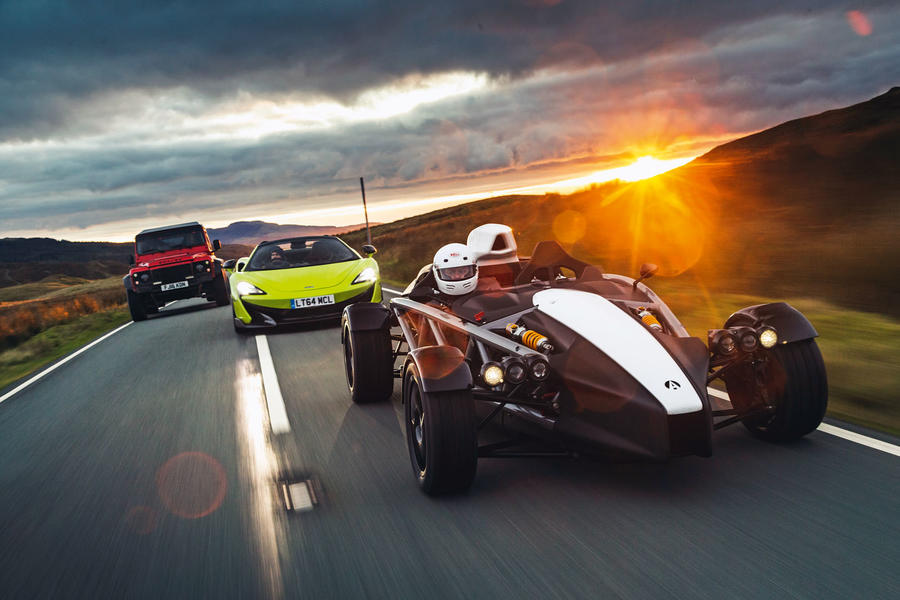 The Ariel Atom 4 doesn’t really do bandwidths: it’s more of a total sensory overload sort of machine, particularly if you take it for a drive on the road without a helmet, where you’re assaulted not just by the elements but also the deafening whistle, whine and chatter of the turbocharger and its ancillaries. It’s an incredible noise, like being chased by an X-Wing fighter that’s firing its laser cannons non-stop.

It’s a physical piece of kit too. Not only is it the only one of our trio with three pedals, it also eschews assistance for the chatty steering and the powerful, feelsome brakes. Technology is limited to variable control of the traction control and turbo boost. On the whole, it’s just you, the Atom and whatever stretch of Tarmac you place it on. It all makes for sensational results, as Saunders reveals after taking some time to process his stint behind the wheel: “Physically challenging but manageable, and so rewarding when you work out how to get the best out of it.”

On track, it’s simply sensational, particularly with the boost turned up to its maximum of ‘3’. The turbocharged Type R 2.0-litre has real fire in its belly below 5000rpm, but beyond this the acceleration appears to increase exponentially – the Ariel powering forward with the explosive violence of, ahem, a split atom. So quick is the Ariel that it takes a lap or two for your brain to properly process what’s going on.

Get in the groove, though, and you’re in for a treat. Keep the traction control in one of its least intrusive settings and then simply revel in the poise, precision and endless flow of information that allows you to drive the thing up to and over the limit with confidence. With previous versions of the Atom, there was always the concern that the high-set mid-mounted motor’s mass could bite you if you got greedy, but not in the 4. 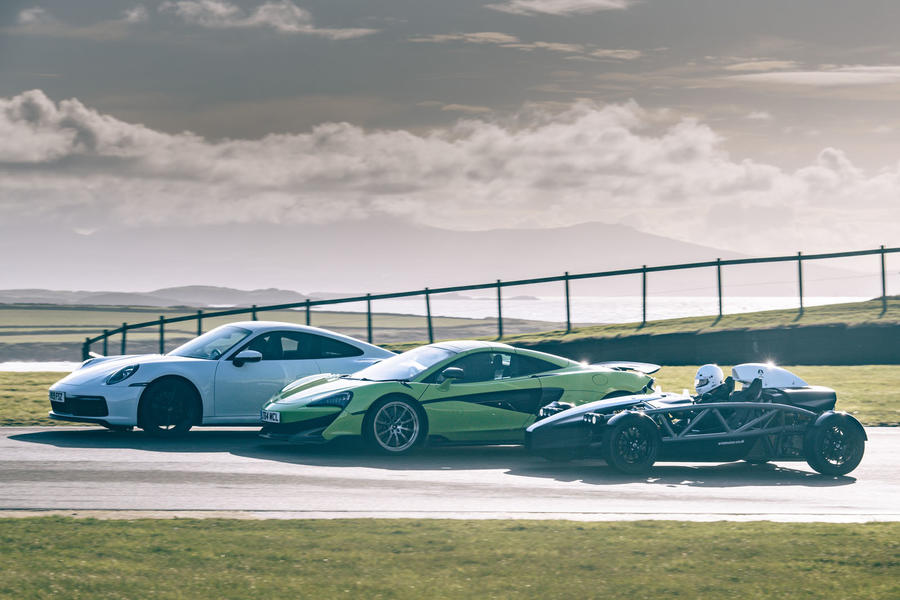 It’s not an ever-increasing-angles-of-attack car like the 911 – the steering requires a lot of muscle much past a quarter of a turn, deterring you from exploring the lock-stops – but such is the car’s balance and the beautifully proportional nature of its controls (you get out exactly what you put in) that you can play with delicious little slip angles here, there and everywhere. It’s a totally absorbing machine that draws you in, turning ‘just one more lap’ into ‘just 10 more laps’.

It’s a riot on the road, too, although perhaps the unusually clement late autumn weather played a part here. You don’t have to drive it hard, however, to reap rich rewards. The Atom 4 makes you smile even when pootling because you can still thrill in the simple act of driving, its analogue approach a refreshing tonic to the increasing digitisation of everything automotive. Simon Davis nails it perfectly when he says: “You’d have to be utterly miserable to dislike this car.” Quite.

So, that’s it – our top three. Each is brilliant in its own right and, with all of our judges putting one of them at the top of their respective score sheets, any would be a deserving champ. But to delve into the clichés, there can only be one winner. All will be revealed.

90 years of the Autocar road test: how ride and handling has evolved

Why does our everyday handling heroes test matter?