BACK TO ALL NEWS
Currently reading: Britain's Best Driver's Car 2018: and the winner is...
UP NEXT
Spending 48 hours touring in a Ferrari Roma

10 cars were in the running for the title of Britain's best Driver's Car, but one one can take the crown
Open gallery
Close

It’s a big day for any car maker when it enters Autocar’s Handling Day winners’ enclosure for the first time.

A warm welcome, then, to McLaren Automotive: and commiserations to Porsche (the Real Madrid CF of Autocar Handling Day with 11 stars on its shirt breast), to Ferrari (five times a winner, like Liverpool – who also play in red), to Lotus (four wins) and to the rest.

The brilliant 600LT ended up taking this year’s Britain’s Best Driver’s Car spoils by just two points out of a maximum 250, but it was a worthy winner, being the preferred champion for three out of five judges. Like the Ferrari, it attracted a perfect 25 score only once and almost perfect 24s just twice. 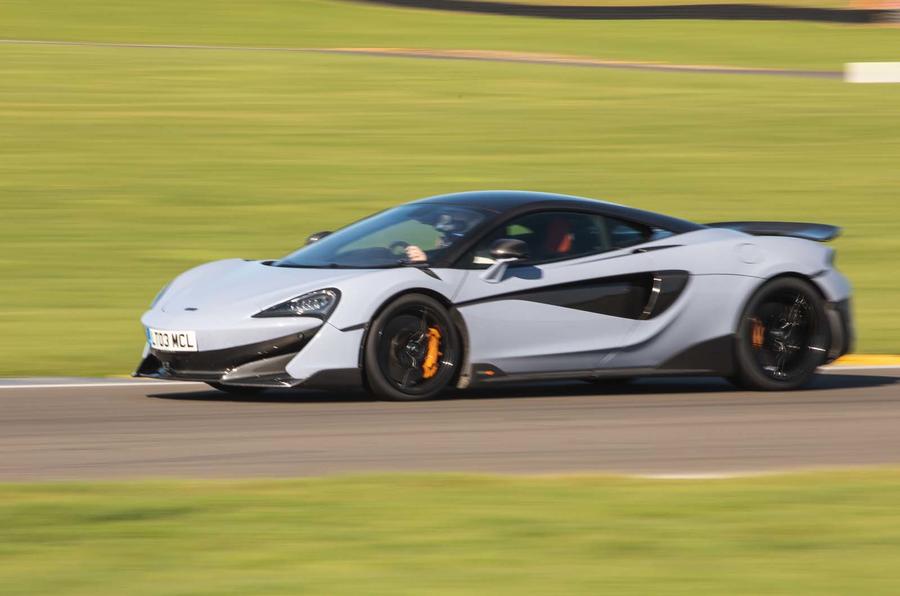 We’re a tough crowd, clearly. But, on balance, the McLaren’s superior road composure and its remarkable ability to involve its driver at any speed just about won out over the Ferrari’s greater outright pace and grip, and superior on-track handling balance and adjustability. By a whisker, the 600LT’s capacity to be more rewarding more of the time swung the final result in its favour – although it could hardly have been closer.

McLaren has already hit dizzying heights with the £750,000 Senna this year and might go on to similar ones with the equally high-end Speedtail in 2019 – but the 600LT shows that its attention can be lavished just as generously on cars at the more attainable end of its showroom range, and to spectacular results. It is a superb track car and a quite sublime fast road car – and now it’s officially the very best new driver’s car of the year to boot. 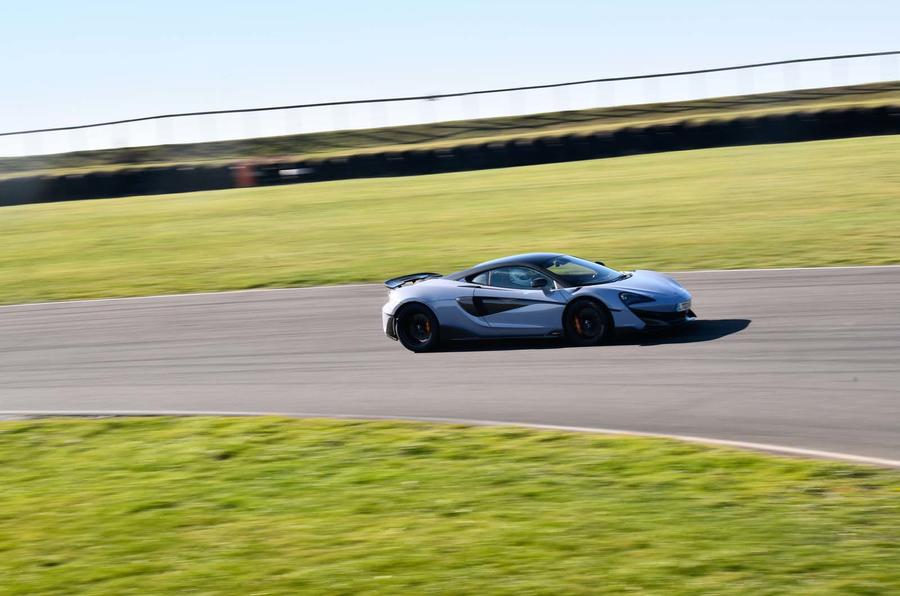 It looks like a sizeable lead to carve out over a 71sec lap but, if anything, the 1.7sec lap time advantage of the Ferrari 488 Pista over the rest of the Britain’s Best Driver’s Car 2018 field actually seems to understate the car’s advantage on accelerative potency and outright grip.

Take a look at the spot comparison of prevailing speed we took on the exit of Anglesey’s Target corner and you get a better idea of what the Ferrari is capable of. Here we compared speed on corner exit at exactly the point at which each of the cars passed downwards beyond 0.8g of lateral load on its way straight again. 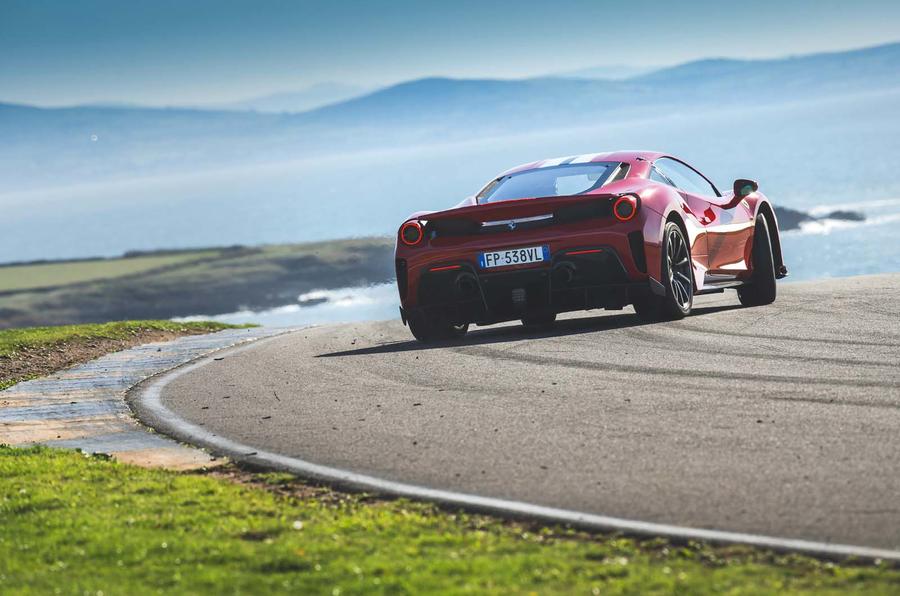 That the 488 Pista is the only car in three figures here, travelling fully 7mph quicker than the next quickest car, says it all about its remarkable levels of adhesion and acceleration. In only one place was the Pista anything but the quickest car on test: at the apex of the off-camber Peel corner.

We did everything possible to ensure a fair lap time comparison, but with 10 cars to get through on a day with plenty of other testing going on, some compromise to perfect like-for-like test conditions was unavoidable. As such, on Michelin Cup R tyres fresher than they were at the time of testing, the Porsche’s lap time might have been a second or so quicker. For similar reasons, both the Aston Martin’s showing and the Lotus’s might have been subject to lesser improvements, although neither likely to be worth enough to move it up the table below by more than one place. 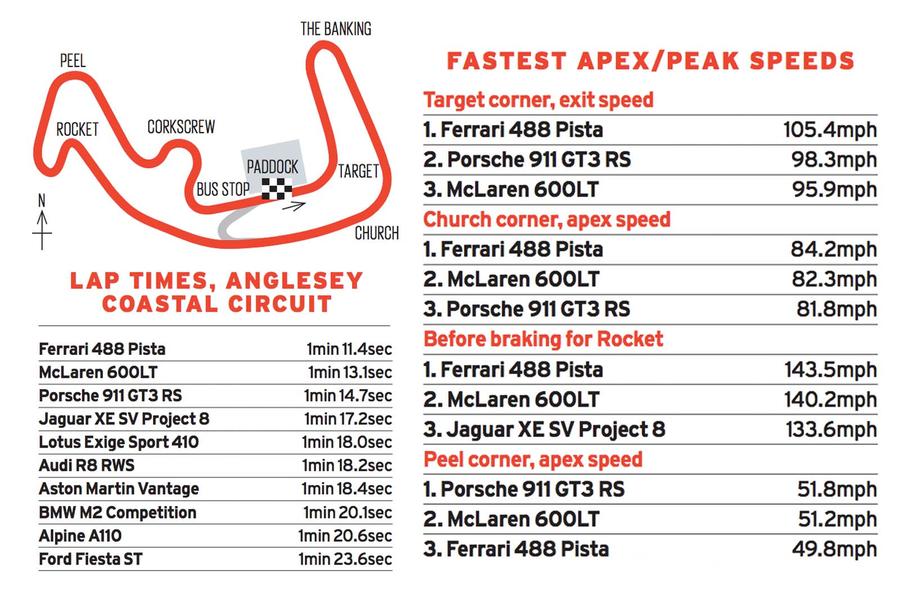 McLaren 600LT: on track at the Hungaroring in 592bhp Sports Series​

McLaren Automotive: The remarkable rise of the Ferrari rival​

A sensational car, no doubt.  And not even the top rung of the McLaren ladder - I would liked to have seen the Senna take part.

All very well, but so few

All very well, but so few drivers will ever be able to see if these results are right. Man in street will never get to drive any of the cars.
Peter Cavellini 18 November 2018

Too many words, more fun , more noise, so, let’s have it Autocar!