BACK TO ALL NEWS
Currently reading: McLaren 600LT: on track at the Hungaroring in 592bhp Sports Series
UP NEXT
Lamborghini confirms LMDh entry for 2024

McLaren 600LT: on track at the Hungaroring in 592bhp Sports Series

Takes the best of the 675LT, 720S and 570S and distils it into a toned, focused, addictive driver’s car. We get hooked at the Hungaroring
Open gallery
Close

Any day involving both a new McLaren and a racetrack is a good one, but the company’s enthusiasm for restricting our first taste of new products to circuits rather than public roads means you’ll have to wait a little longer to find out how the 600LT copes with the real world. On the basis of our first acquaintance at the Hungaroring, however, it feels pretty special.

We’ve reported extensively on the basic ingredients before, but here’s a recap. The 600LT gets a modest increase in power (its 3.8-litre twin- turbo V8 turned up to 592bhp from the 570S’s 562bhp), more aggressive suspension, a top-exit exhaust on the rear deck and, because of this, a fixed rear wing with a heatproof coating where the hot gases flow over it. More impressive is the weight saving: forgo climate control and the audio system and specify the lightweight carbonfibre shell seats (from the Senna) and the 600LT is 100kg lighter than the 570S.

Few owners will be that dedicated. Product manager Tom Taylor admits the company is planning to check with the one owner who has already ordered the air-con delete to see if he’s really sure. But even with cooling and entertainment left in place, an 80kg-plus weight saving on an already light car is an incredible feat.

The Hungaroring is the first international-spec track to have been constructed in what, when it opened in 1986, was still the communist bloc. The 2.7-mile circuit is twisty and bumpy with serious elevation changes – a tough challenge, and the sort of place where the 600LT should excel. On tighter tracks, we’re told, it will have the legs on the 675LT. 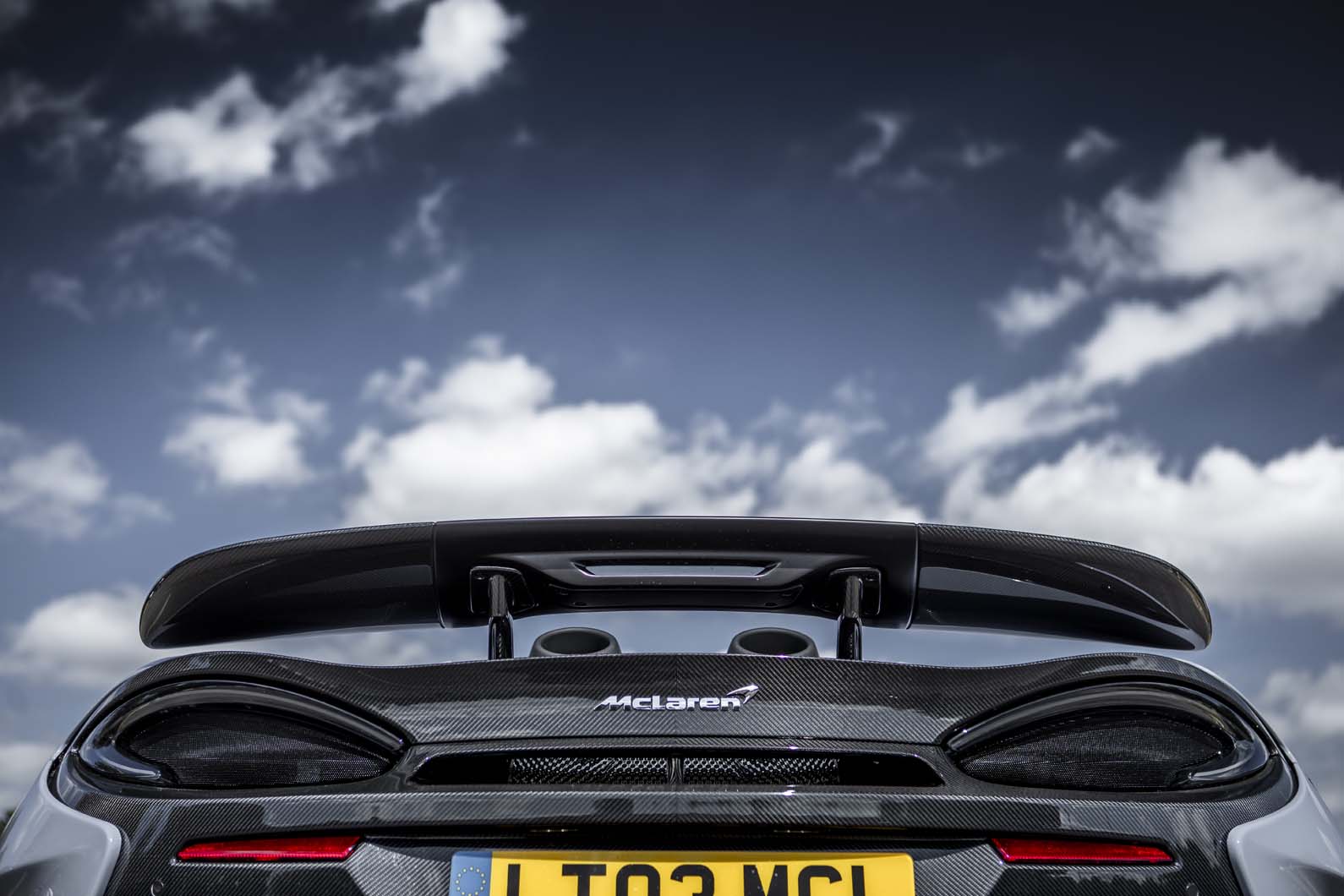 I’m sent out in a 570S first. Officially, it’s to learn which way the corners go, but it’s also to demonstrate how different two cars sharing most of the same core architecture can feel. The lesser car is predictably fast, taut and agile – it’s still a McLaren – but within two corners in the 600LT, it’s clear that it’s a very different creature.

Not really in terms of raw urge, although the 600LT is quicker than the 570S. McLaren says it will outpace much more expensive alternatives, but basic marketing logic dictates it can’t be allowed to outdrag the much more expensive 720S. But it feels immediately more exciting, that top-exit exhaust having a harder-edged rasp from idle speed upwards. (Sadly, it’s too light outside to confirm its ability to shoot flames.) The seven-speed dual-clutch gearbox gives each full-throttle upshift a neck-nodding bump of torque, just like the 720S and Senna.

Corners are the revelation and clearly the 600LT’s natural habitat. It dives for apexes with a savage enthusiasm, the Pirelli P Zero Trofeo R tyres delivering what feels like competition-grade adhesion once brought up to temperature. But it doesn’t make hard use feel like a fight, either. The steering is light – McLaren has never gone for workout weighting – but perfectly proportional and the suede-rimmed wheel is alive with feedback as loadings increase. The ride is obviously firm, a point made by a couple of exploratory forays over some of the track’s bumpy kerbs, but the dampers retain iron-fisted control over the body’s mass.

Aero is helping out – the fixed wing and extended diffuser produce a claimed 100kg of downforce at 155mph – but it doesn’t have the drive-on-a-ceiling feeling of the Senna. The throttle response is sharp enough to bring surgery to mind. Pit-lane trundling reveals some lag at lower engine speeds, but the accelerator delivers instant response on track. 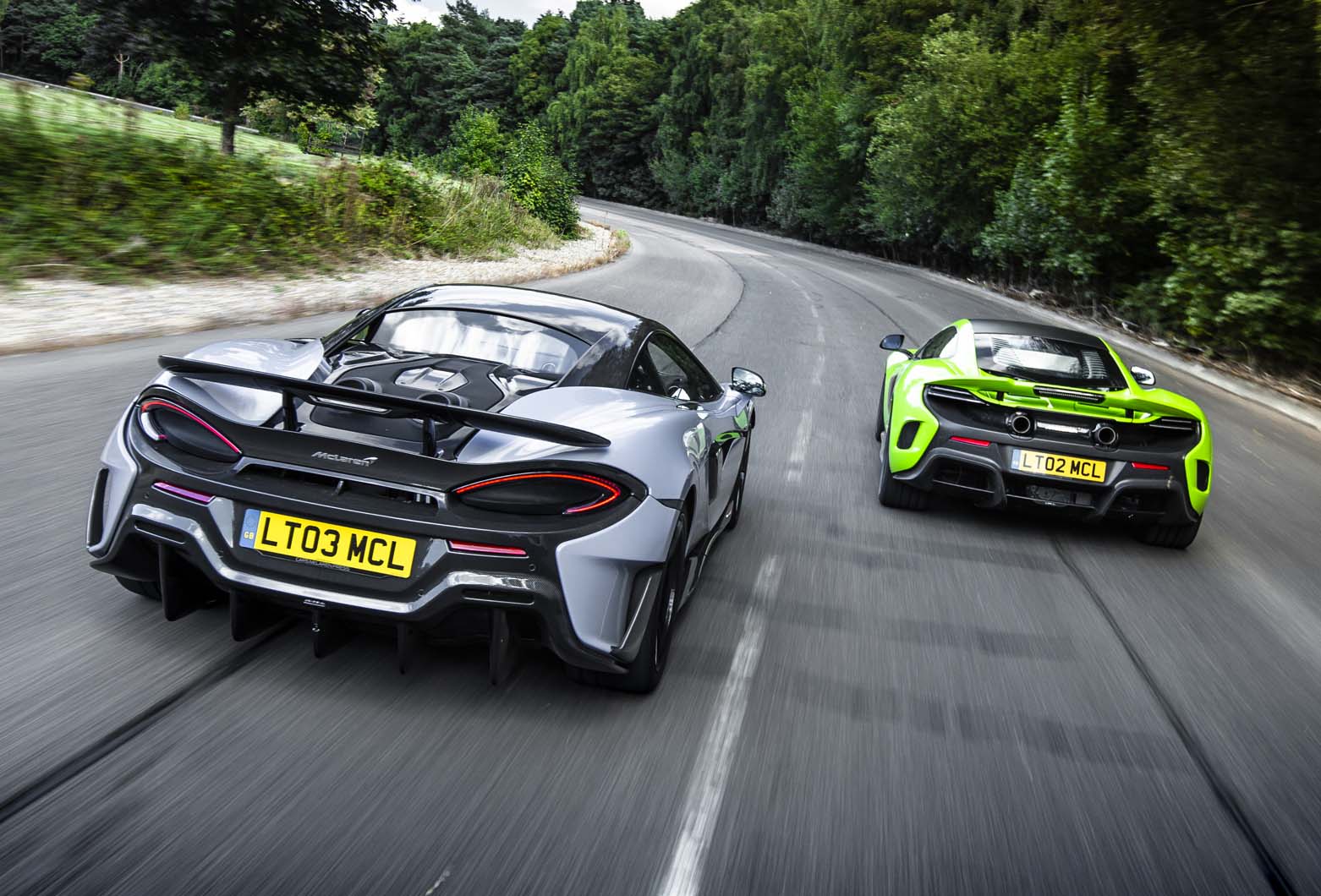 Although it’s easy to drive to an impressively high percentile of its towering limits, the 600LT never feels point and shoot. It’s not one of those cars that hides behind its tech. Even with the stability system standing guard, the driver continues to bear responsibility for getting it right. Too much speed into a slower turn provokes understeer, and getting on the throttle too early, or too keenly, produces the sensation of the back end starting to slide, the traction control only doing a certain amount to mitigate it.

The key is definitely to use the carbon-ceramic brakes, which are addressed through a wonderfully firm pedal, to help turn the car, trailing them towards the apex and the proper moment to unleash the fury. Unlike the 675LT, the junior car isn’t snappy or abrupt when it does start to let go. Chase laughs rather than lap times and it can be turned into a tyre-smoking drift machine.

On track, the 600LT feels like an apex predator for any competition remotely close to its price point. Indeed, it feels every bit as exciting as the 675LT. I bet it will make one hell of a car on the road, too.

Blink and you’ll miss it:

Although keen to emphasise that the 600LT is a limited-edition car, McLaren can’t say just how few it plans to build. A one-year production limit for the 600LT Coupé will need to be fitted around orders for regular Coupés, Spiders and the GT. But having sold more than 2000 Sports Series cars last year, we wouldn’t be surprised if the number of 600LT Coupés edges towards 1000. 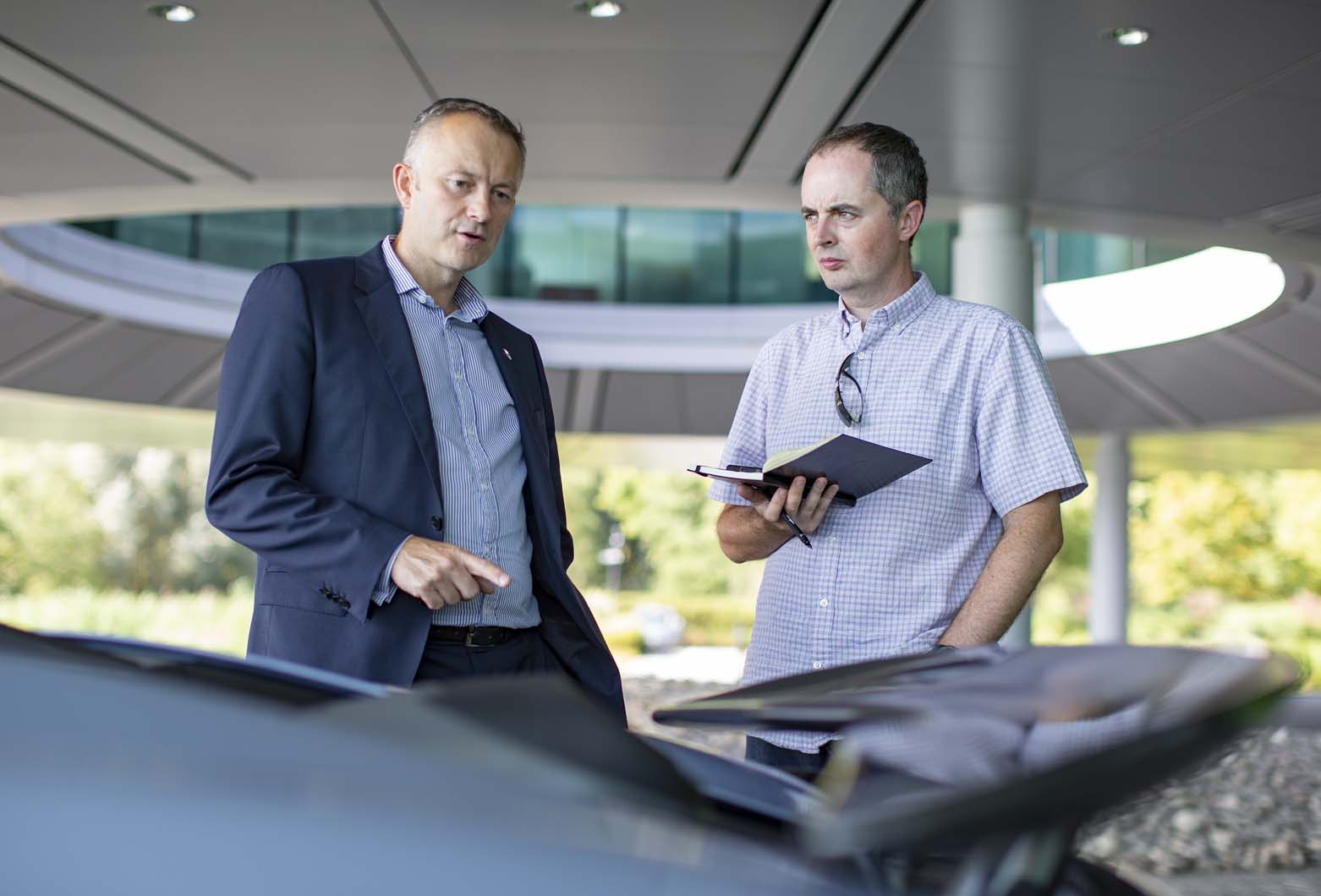 To find out what a tough act the 600LT has to follow, we got a prototype version together with a 675LT in the UK. Doing this ahead of the press launch meant that weren’t allowed to drive the 600LT, but even from the passenger seat, it was clear that a common strand connects the two cars, and also that the game has moved on a fair bit in the past three years.

It’s not an exaggeration to say that the 675LT was one of the major milestones in McLaren Automotive’s history. Before it, there had been a perception of an emotional disconnect with the 12C and even 650S, two cars that had been engineered to deliver enormous speed, but that couldn’t match their best rivals on pure emotional appeal. The 675LT Coupé, launched in 2015, was a magnificent response — a track- focused hellion that suddenly made everything else in its part of the market feel excessively plus and flabby.

The appeal was obvious: McLaren sold out a run of 500 Coupés followed by another of 500 Spiders. Although the 675’s success made other LTs a racing certainty, it was more of a suprise that the next LT would be based on the cheaper Sports Series. On paper, it looks like a bargain at £185,500 before options compared with the £259,500 of its predecessor, but its more humble origins mean that it does without the 675LT’s roll-reducing hydraulic suspension and active aerodynamics.

“That gave us the opportunity to do the top-exit exhaust,” says Tom Taylor, the Sports Series product manager, “which looks amazing but also frees up the space needed for a bigger diffuser.”

Putting the two cars together side by side also reveals a few surprises: the 600LT looks slightly bigger than the older car but also seems to possess much more aggressive wingwork, especially the vertical vanes that come off the side of the rear bumper. The 675LT’s cabin feels even more basic than I remember — beyond the central touchscreen, pretty much every surface seems to be covered in grey Alcantara — and McLaren’s heritage car is also one of the few to have been built without air conditioning. 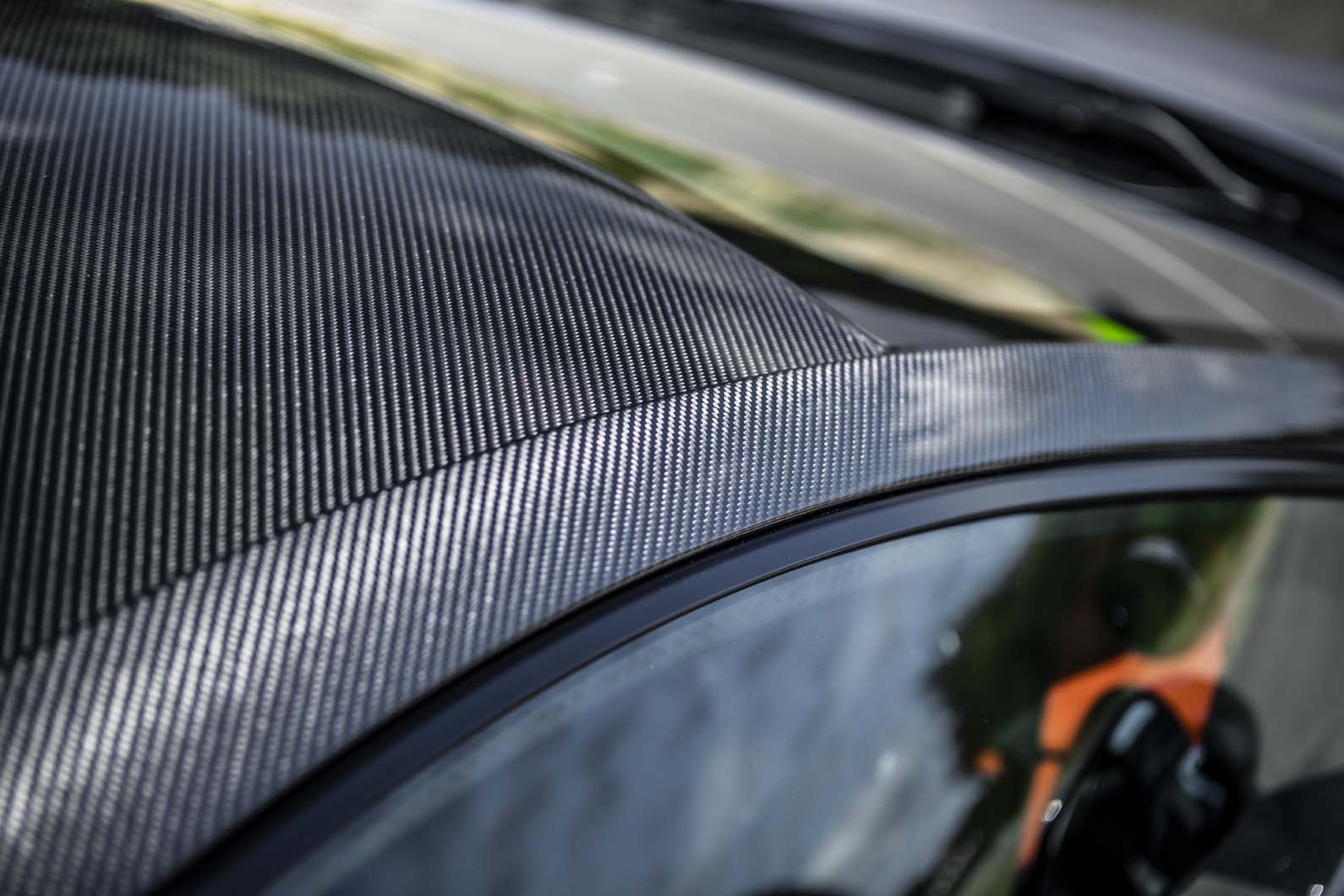 Beyond the heat soak of a hot late summer’s day, refinement in the 675LT is also less good than I remember it. It’s bone-shakingly firm on public roads, the engine fills the cabin with booming harmonics at cruising speeds and — even on dry tarmac — bigger throttle openings have the stability control fluttering as the rear axle struggles for grip. I know it’s mighty on track, but it’s a bit of a pig on the road.

A passenger ride in the 600LT with vehicle line director Darren Goddard shows how far things have come in just three years. Fittingly, the prototype has also been made without air-con, although the cabin is less sweaty than the 675’s, but on the roads of Surrey, it’s immediately obvious that the Sports Series car is a much more civilised proposition with chassis and powertrain in their gentlest modes. For a start, we can talk without shouting.

“The idea was to bring the best of three vehicles,” Goddard explains, “the engagement and sound and connection of the LT, the agility of the 570S and the stability and steering feel of the 720S. The way we’ve done the rear axle comes very much from the 720. It’s much more secure. I wouldn’t say the 675LT was unpredictable, but this is much more predictable.” 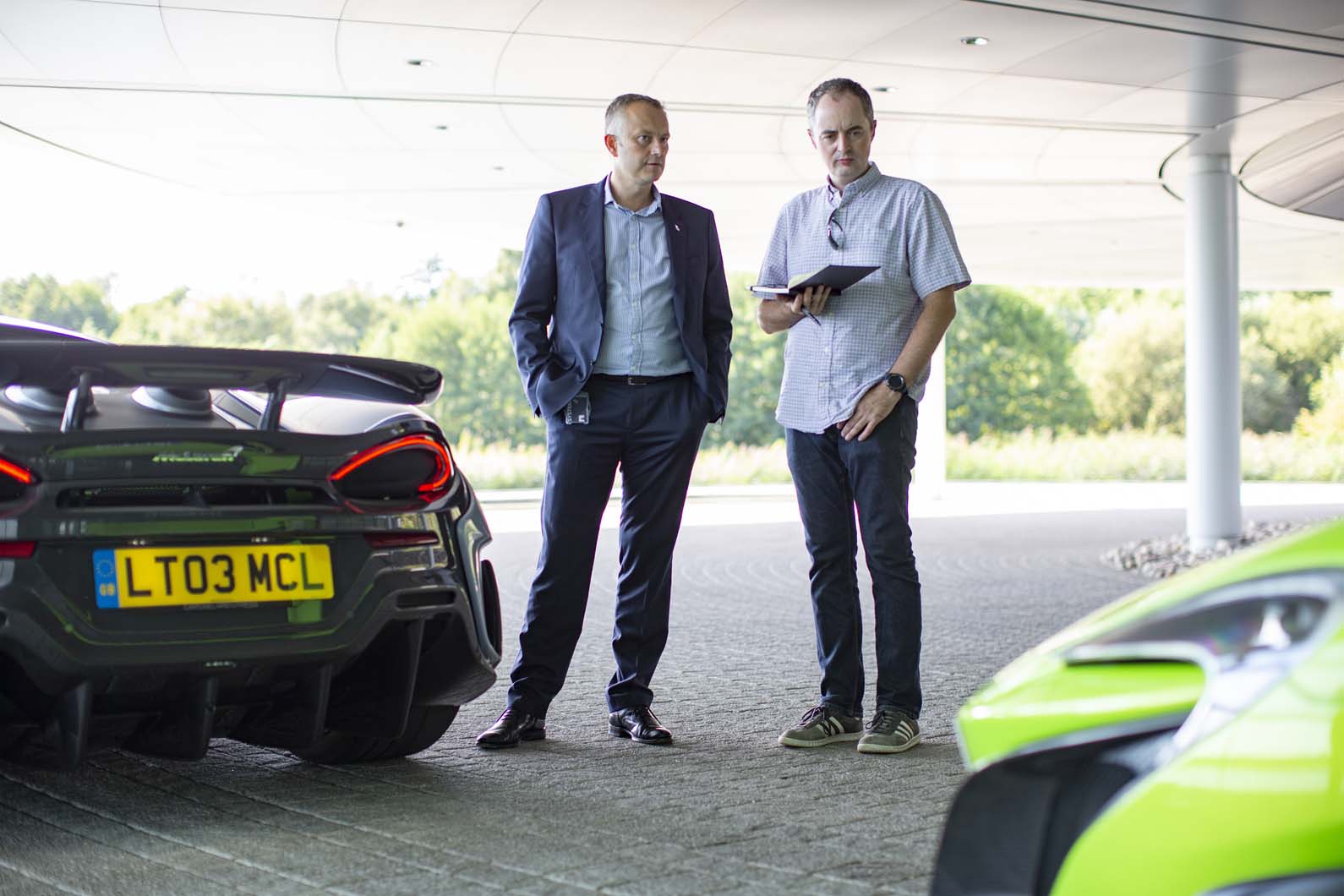 At this point, I admit to having spun a 675LT on track at Silverstone during the original launch, to Goddard’s obvious amusement.

“Other than a couple of luxuries, I’m having to think about that,” Goddard admits. “I don’t think you really lose anything that matters. Every day of the week, if I had the cash, I’d take an LT.”

...Unlike the 675LT, the junior car isn't snappy or abrupt when it does start to let go...

Intersting to note that shortcomings like this, about an older McLaren, only come out when you are bigging up a newer McLaren, because I sure as hell don't remember reading this about 675LT when you did your review of the older car!

...Unlike the 675LT, the junior car isn't snappy or abrupt when it does start to let go...

Intersting to note that shortcomings like this, about an older McLaren, only come out when you are bigging up a newer McLaren, because I sure as hell don't remember reading this about 675LT when you did your review of the older car!

Yes, and the suggestion that the 675LT is 'a pig' on public roads sounds like utter bollards and has not been mentioned in many a review.

Once again AutoExpress have gotten a video of a new Car before Autocar, just watched ex Autocars Steve Sutcliffe put the Lt through it paces, come on Autocar, you need to be be quicker!

Just about any McLaren that  comes out everyone likes, just like Ice cream, it comes in a similar carton maybe with a different color but inside it’s still ice cream, just a different flavour, yes they’re are great cars but they look nearly the same, like I said, same Carton different flavour inside...

Just about any McLaren that  comes out everyone likes, just like Ice cream, it comes in a similar carton maybe with a different color but inside it’s still ice cream, just a different flavour, yes they’re are great cars but they look nearly the same, like I said, same Carton different flavour inside...

I thought you'd managed it, there, but then you went and threw in one of those pesky superfluous capitals near the end!