BACK TO ALL NEWS
Currently reading: Ami, myself and I: Life with Citroen's 28mph urban EV
UP NEXT
Why now is the time to buy a proper high-mileage hero

Ami, myself and I: Life with Citroen's 28mph urban EV

"Mum. Please help. People keep staring at us. Some are pointing and laughing. Someone just beeped their horn at us. This is torture and I don’t want to do it again.”

It was day one with my latest test car, and I had noticed my pre-teen daughter reaching for her phone as I drove her to school but hadn’t appreciated what she was texting, nor that this admittedly quirky vehicle could induce such extreme emotions in the easily embarrassed.

Until then, I had revelled in its difference, the wear and tear of my near 50 years cushioning me from any cruelty. This, I thought, was a car that started conversations and made people smile, overcoming its bargain-basement price tag with a combination of oddity and flair, turning the Lego cars of all our childhoods into a joyous reality.

It cut through class and had a gender-easy appeal, too. Earlier that day, I had looked out of the window to find a gaggle of friends giving it the once over, a couple on their hands and knees seeking to understand what was before their eyes. Some weeks later, I drove it into Knightsbridge and parked near Harrods. In truth, I was there for the photo opportunities next to Mercedes G-Wagens and the like, where a wheel was the size of my car, but its inherent magnetism overwhelmed any cynicism. Men and women of all ages, wearing shoes or cradling handbags that cost comfortably more than the car, wanted to know more. What is it? Can I buy one? Isn’t it just fabulous? 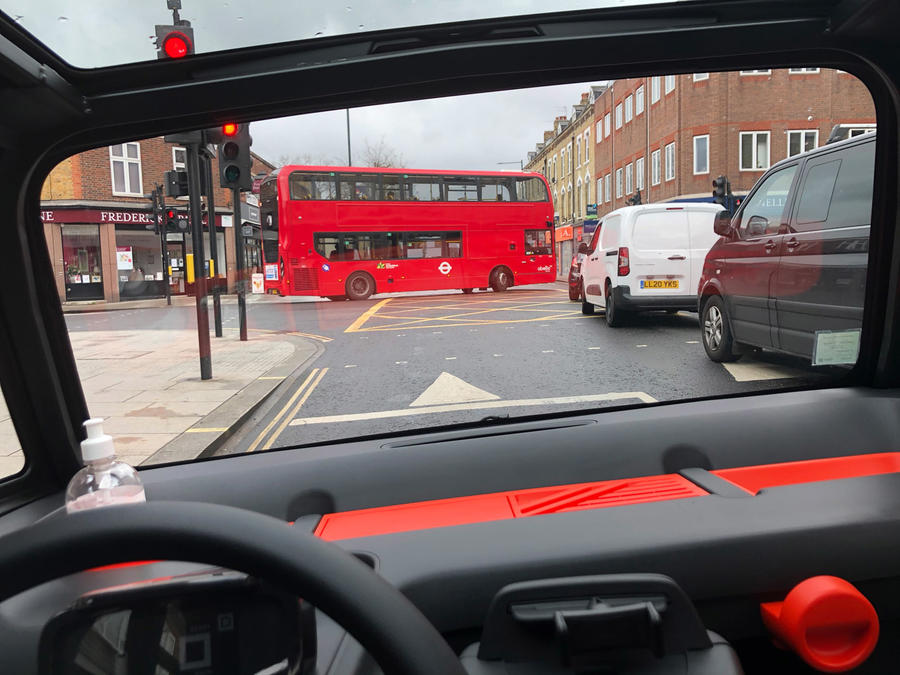 Well, it’s the Citroën Ami. No, you can’t – at least not yet in the UK, but maybe in time. And, yes, it is – unless you’re an 11-year-old or, as it turned out, the owner of pretty much any large SUV, or anyone who had to follow us at our governed top speed of 28mph on any road with a limit of 30mph or above. Maybe you, too? Because after a couple of weeks and a few hundred miles behind the wheel, I came to understand that the Ami was incapable of leaving anyone nonplussed and, in fact, wasn’t everybody’s idea of a good friend.

Plus ça change, as its makers might say – accompanied no doubt by a Gallic shrug born out of a lifetime of being treated as such. I was reminded of this when I met up with the brilliantly enthusiastic Neil Osborn, owner and restorer of the original Ami that you saw on the previous page. An incurable car fan with a leaning for French fancies, he understands better than most the appeal of Citroën’s capacity to surprise. Its long and proud history of making deliciously different cars has snared his interest and wallet on numerous occasions, thereby putting Citroëns at the heart of tales of fun and frolics on family trips across Europe and more.

To him – and countless others, I suspect – a Citroën could be a much-loved part of the family, not just a car. It’s a spirit the brand most recently revived (and then dialled back) with the divisive C4 Cactus project, but one which the Ami wholeheartedly embraces again. Could the Ami really be a Citroën to love (or hate) in the finest traditions of yesteryear, escaping any links with its mass-market and all-too-often third-choice brethren? 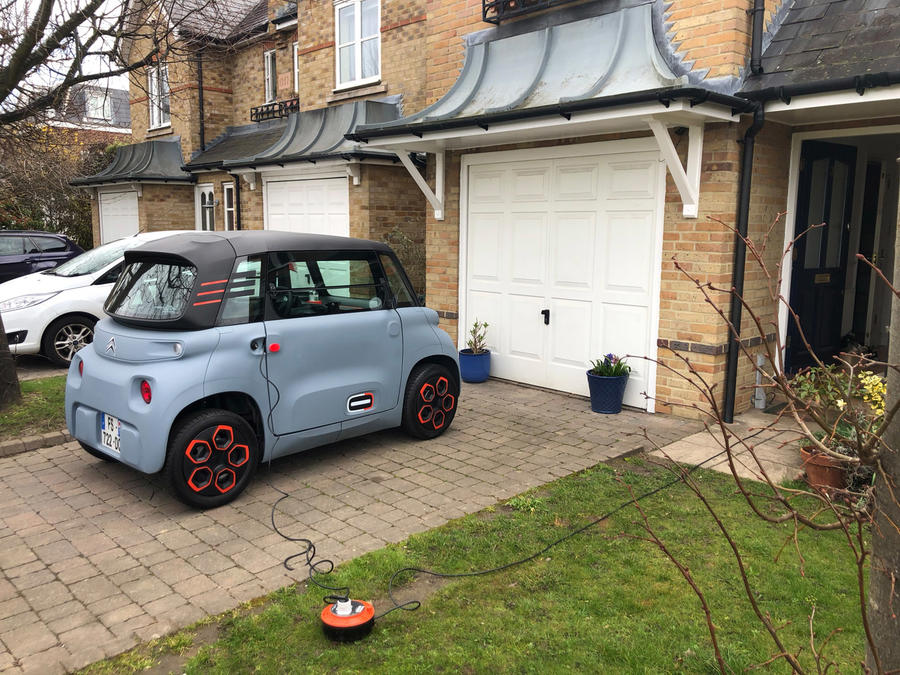 That judgement, I concluded after many hours with my foot flat to the floor trying to keep up with everyone else and with an extension cable running out of my front door to top up its 43-mile battery, can only be made with an appreciation of its fitness for purpose – and, most crucially, its likely price of £6000, or £2500 plus a weekly rental of around £20, or even 25p per minute.

In simple, comparative terms, measured against the cheapest new cars or comparable used ones, the Ami is an absurd proposition, flawed in terms of performance, practicality, safety and more. But, as I discovered, that doesn’t tell the full story.

Yes, the limitations are plentiful, from its strictly two-seat format through to the built-in three-pin plug that awkwardly feeds into a recess behind the passenger door, the not awful but not much better seats and the fabric cords that you tug to release the door catches. While a neat cost-saving solution, those scream penny-pinching at anyone who steps aboard. Oh, and then there’s the tentpole-like metal frame that surrounds you, a visible reminder that the Ami is a quadricycle, not a car, and therefore safety is best measured in terms of ‘I’d rather be in that than on a motorbike’.

But where normally just one or two of these limitations would be enough to end the discussion, the Ami is different. You need only to glance at it to understand that it’s created solely for use in built-up areas, where 43 miles (and it is remarkably true to its range indicator’s claims) are enough for a week’s driving and where travelling at 28mph is a rare luxury (central London’s peak-time average speed is 7.1mph and inner London’s 11.6mph, suggesting that the Ami in fact has an ample surplus of pace). 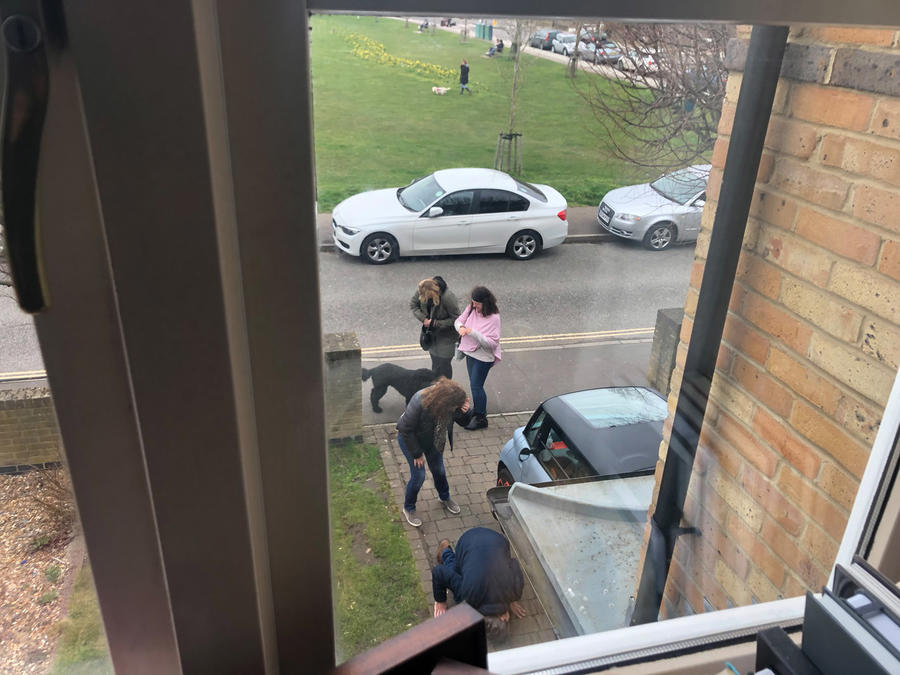 Built for two it may be but, because of the battery being in the floor, there’s a remarkable amount of space inside, and more than enough for a decent food shop. You sit high and surrounded by windows, and while the cute, 2CV-inspired horizontally hinged passenger windows only flick up, making it a bit claustrophobic, visibility is great. Combined with the Ami’s compact dimensions and jaw-dropping turning circle, it makes for a city vehicle that has unusual agility, and one that is especially easy to place, be it between gaps in the traffic or nose-on into the kerb for a spot of opportunistic parking. You might feel more powerful, safe or at home in your SUV, but the feeling of liberation that comes from being behind the wheel of the Ami is unmatched in anything else I’ve driven. Now perhaps you’re starting to sense why it’s more than just a head-turner.

And then there’s the fact that it’s undeniably clever, making a virtue of delivering enough (pace, space, perhaps even grace, given its electric underpinnings, although the lack of any kind of sound-damping or meaningful suspension means serenity comes only if your destination offers it) without making you aware of how many corners have had to be cut.

Even if you don’t like its design, you have to admire it. Here’s a car with panels that swap front to back and side to side, with drawstrings for door handles and plastic trim that Tonka would be proud of, yet there’s no hint of hair shirt about it; it’s a low-cost product with admittedly cartoonish design flourishes that perhaps even Terence Conran could have admired. In that regard, as my trip around Knightsbridge highlighted, it’s brilliant.

Would I drive it every day? No, that would be silly. Would I drive it around my part of London, where speeds are limited to 20mph? Maybe, although I would prefer it if everyone were also in Amis, so that congestion were eased and the likelihood of me being crushed by any of the posh SUV owners whose sensibilities seemed so inflamed by sharing the road with it were greatly reduced. But would it fit into my life as the car that I hop in when the conditions and my needs most suit its capabilities? Certainly, and at this price, why not? 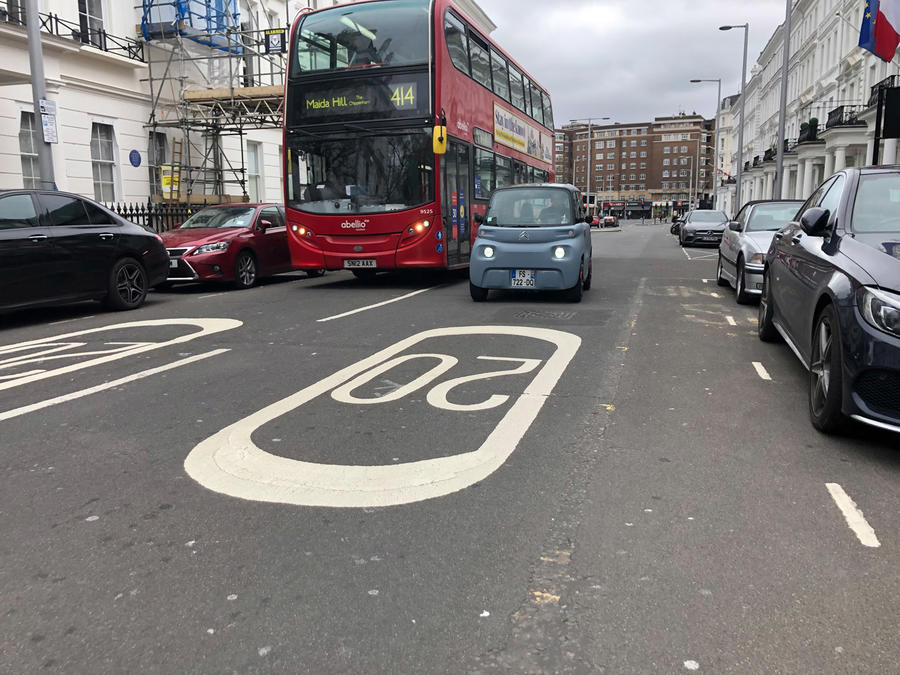 Maybe if UK sales begin, I will be proved wrong, but my hunch is that it would be too kind even to say that the Ami isn’t a car for everyone. In truth, it is, I suspect, a car for hardly anyone. Not, perhaps, for my daughter just yet; but for a niche, it will be both lovable and practical, liberating and just-so, as well as unapologetically unconventional.

Perhaps crucially, for owners and for Citroën, it will also always be visible, a mobile advert for some of the finer aspects of its maker’s alternative outlook on life that would take many millions of marketing expenditure to otherwise achieve.

The Ami is a reminder that there are usually multiple routes to the same goal, and that the ones favoured by most people aren’t always the most enjoyable solutions for everyone.

Could the Ami catch on?

The Ami’s swiftest route to success would most likely be if city centres took the decision to restrict what types of vehicles can come and go. On the road with today’s traffic, you feel vulnerable and slow, but it wouldn’t be a huge leap of the imagination for planners to put curbs on the size, power and speed of vehicles entering their most congested or polluted parts. 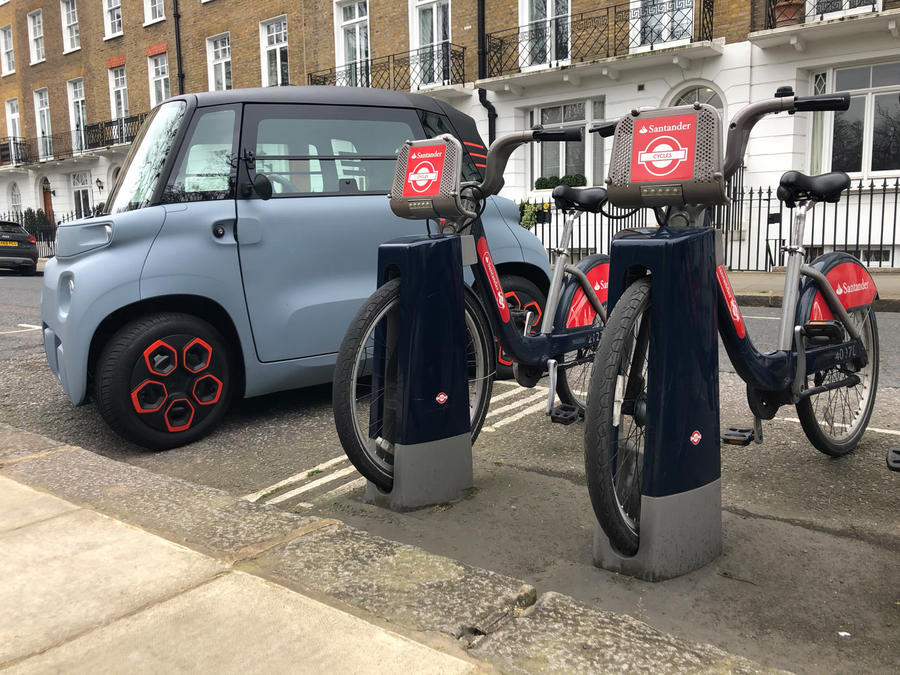 However, even then the Ami wouldn’t necessarily be a shoo-in for success. China’s car makers have already been incentivised by legislation and budgets to develop electric-powered microcars not dissimilar to the Ami’s philosophy. In the case of the Wuling Hongguang Mini EV, co-developed with General Motors and priced from £3200 in its home market (but almost £9000 in specced-out trim by the time it’s imported into Europe under the relaunched Dartz banner), it already delivers more for less: four seats, 100 miles of range and a top speed of 62mph standing out.

Hundreds of thousands of sales of the Hongguang Mini EV have already led to a convertible version being launched, and numerous rivals are now lining up to create microcars of their own and topple its new-found status as the world’s best-selling EV.

Just as Citroën is about to ramp up its aspirations for the Ami, it might find that it’s destined to be a bit-part player in a niche that it may well have hoped to have to itself.

Has it been crash-tested?  It looks as if a shunt from behind, with another vehicle in front, would leave this flimsy Ami as flat as a pancake - with the driver as the jam filling.

Ugly little box that (for me) is the epitome of undesirability.

This one doesn't tempt. I have put my name down for a Microlino though - brilliant thing which gets so much right that this doesn't. Design/performance/range a world on.