BACK TO ALL NEWS
Currently reading: Volvo and Uber unveil autonomous production XC90
UP NEXT
How Max Chilton and the McMurtry Speirling conquered Goodwood

Volvo has presented the fruits of its ongoing collaboration with ride-hailing firm Uber: a production-ready Volvo XC90 capable of self-driving.

Fitted with “an array of sensors” (not detailed in depth by Volvo) mounted on a bar that can attach to its existing roof rails, the SUV also includes several back-up systems for steering and braking, alongside a back-up battery. The back-up is designed to kick in immediately should any of the primary systems fail.

The XC90 doesn’t feature autonomous software developed by Volvo; instead, it’s been designed to allow Uber to “easily install its own self-driving system, enabling the possible future deployment of self-driving cars in Uber’s network as an autonomous ride-sharing service”.

Uber claims this new XC90 is safer and more reliable than its current fleet, and will eventually replace these older vehicles. The two companies signed a commercial agreement in 2016 for Volvo to build and deliver “tens of thousands” of autonomous-drive-ready base cars such as these in the next few years. 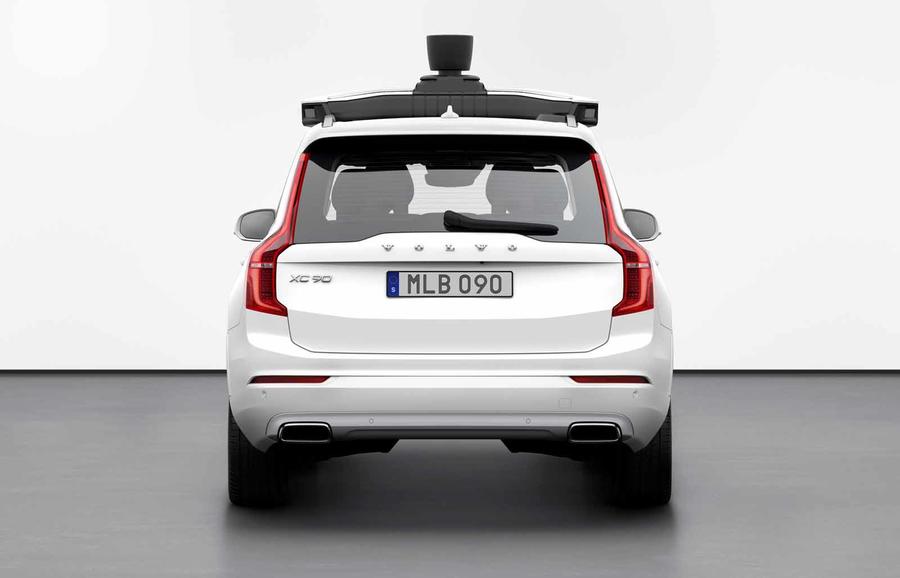 The Swedish maker claims Uber’s system “may one day” be able to safely and legally operate without a “mission specialist” - Uber’s name for a trained Uber employee currently needed to operate and oversee the firm’s autonomous development cars.

Uber has been trialling a fleet of around 250 autonomous XC90s around various states in the US for two years, with a licence recently granted to conduct testing on public roads in Sweden. One of Uber’s XC90s was involved in a fatal collision between the car and a pedestrian in Arizona last year, which was investigated by the National Transportation Safety Board. The firm shut down the programme after the Arizona governor raised objections.

Volvo claims it will “use a similar autonomous base vehicle” for the roll-out of future models, based on the next generation of its SPA modular platform. It claims these cars, set to launch in the early 2020s, will include functions “designed to enable unsupervised autonomous drive in clearly designated areas such as highways and ring roads”.

Uber vs London cab vs sat-nav: which is best?

...we're not going back to the 3 autonomous car stories a day. Oh and if there's only a maximum of 250 XC90's out there at present and 1 of those killed a cyclist it's a pretty poor ratio!

daft is the new stupid

There are plenty of driverless trains in service already and train engineers are long gone, however I agree with your sentiments that this is just stupid, why do we need driverless vehicles on the roads? Trains I can understand a bit more as it is the signalman who routes trains so they can be programmed to go at the correct line speeds and stop in the correct places and when signals demand it, but still there is no way of controlling the unforseen, it's a solution to a problem that doesn't exist, plus surely removing the driver is simply making more people jobless.

Great, so it’ll drive itself, what about all the other cars?, the ones with a human control, making his own decisions, what if he crashes into the Uber Taxi?, Car can’t avoid that scenario, can it?