BACK TO ALL NEWS
Currently reading: Volkswagen unveils Moia, its new mobility services brand
UP NEXT
Analysis: Why the decline in diesel sales has slowed in 2022

The Volkswagen Group has named its new thirteenth brand Moia. The newly formed company will focus on the emerging market for mobility on demand, which Volkswagen is developing as a second pillar to its business alongside the traditional car sales model.

Moia will begin by offering ride-hailing in the short term before moving into car pooling and shuttle services using its own purpose-built battery electric vehicles that will, in time, most likely be self-driving.

This new special-purpose vehicle, or SPV, will be built by one of Moia’s sister passenger vehicle companies in the group and feature the badges of both firms. It is likely to be unveiled in a early form next year.

Ole Harms, the chief executive of Moia, said: “It will be built to purpose, so you could think about special entrances, seating configurations, spaciousness and an electric drivetrain.”

Those characteristics mean the vehicle could resemble the Volkswagen Budd-E microbus, shown as a concept at the Consumer Electronics Show at the start of this year. The all-wheel-drive electric vehicle is likely to make production before the end of the decade, based upon the group’s new modular electric vehicle platform (MEB).

Harms said Moia planned to “leverage all the strengths and capabilities of the Volkswagen Group and use all the technological advantages - such as autonomous cars - to make our services even better, safer and more enjoyable”.

“That’s probably one of the biggest assets that we have. We have all these engineers and all these plans that we could use to industrialise our services and to bring them to the market at scale.”

The name and functions of the new brand were laid out by Moia’s chief executive officer Ole Harms at the TechCrunch Disrupt event in east London today (Monday). Harms has been in charge of New Business and Mobility Services business unit at Volkswagen since 2014.

“Moia will develop and market its own mobility services either independently or in partnership with cities and existing transport systems,” said Harms. “In the future our electric fleet of cars and shuttles will create cleaner, quieter cities where traffic is not just reduced but also more evenly distributed,” he said. 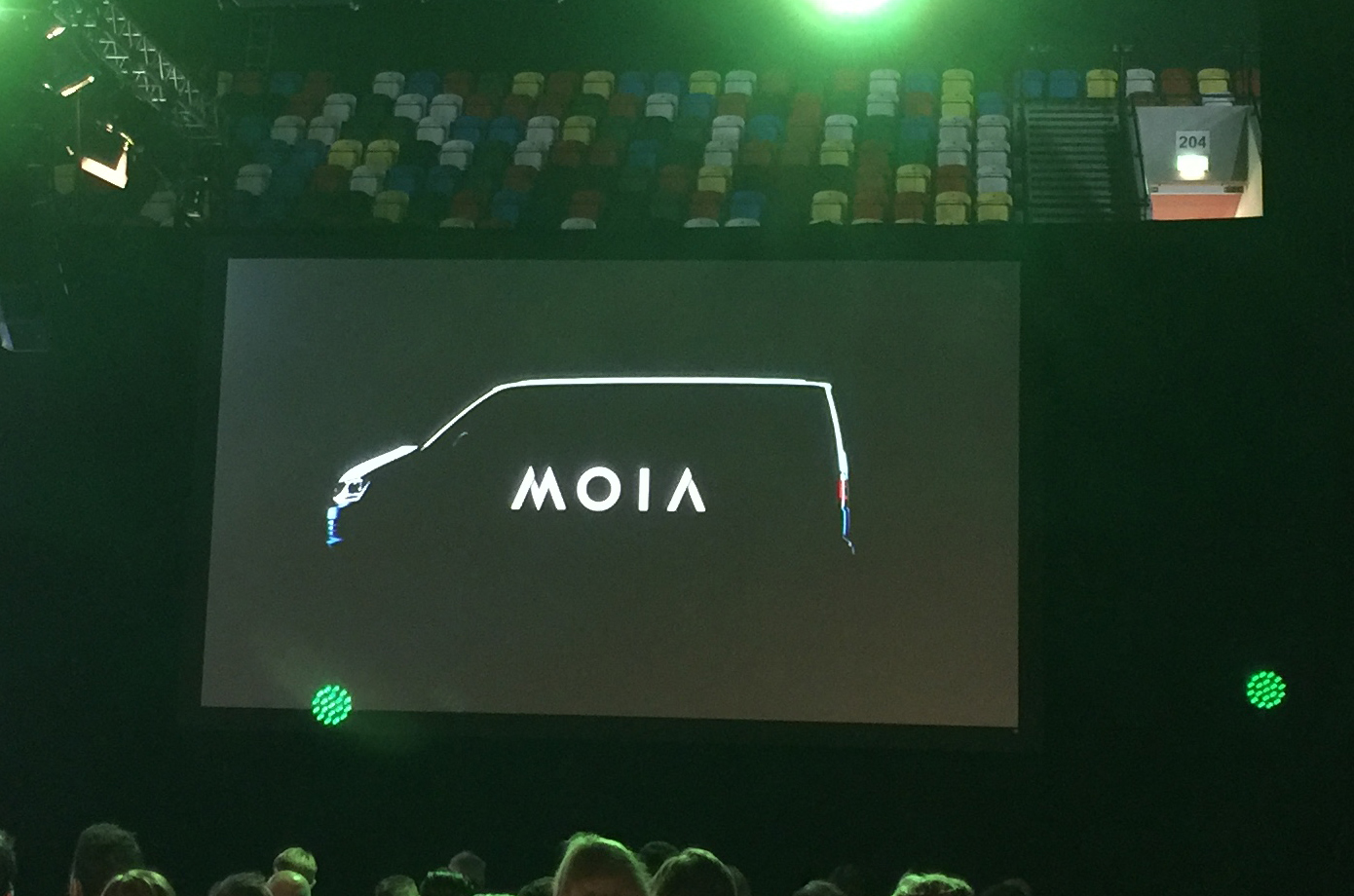 Moia aims to provide mobility for everyone at affordable prices without having to own their own car. Harms said the aim was to “democratise mobility, which means that we want to operate at a price level that’s comparable with other transport systems”. The idea is that you can summon or book a vehicle via an app on your smartphone.

The first step is ride hailing, and the Volkswagen Group has already laid the groundwork. In May of this year, it made a $300m (£236m) investment in Gett, an on-demand taxi service that operates in more than 100 cities around the world, including 25 in the UK.

Founded in 2010, Gett is very active in London, where more than half of all black cabs are part of its network. It operates some 11,500 taxis in London, having acquired RadioTaxis, one of Britain’s largest taxi groups, earlier this year.

Gett is as a rival for better-known Uber, although it puts a greater emphasis on corporate customers than its better-known alternative, offering pre-booked rides, business accounts and having licensed black cabs on its books rather than ordinary drivers.

The cooperation between VW and Gett is already bearing fruit. In Moscow, for example, Volkswagen offers preferential rates on new car financing and insurance to Gett drivers in a bid to make it easier for drivers to enter the black cab business. Drivers can choose from a Volkswagen Polo saloon, a Volkswagen Jetta, a Skoda Rapid or an Skoda Octavia.

Similar schemes will be set up in other markets soon, said Harms, who added the Moia wanted to form a strong alliance of entrepreneurs along similar lines of Gett to expand in its target cities.

The second major area of Moia’s business is to set up its own on-demand pooling shuttle services from homes to city centres that are co-ordinated via an app.

Also known as connected commuting, the aim is to optimise the use of the existing road infrastructure by cutting down the number of vehicles travelling between the same points. Moia’s first vehicle pooling pilot projects are scheduled to begin in two European cities in late 2017.

It is likely that Moia’s services might have to rely on vehicles powered by internal combustion engines in some regions in the short-term, Harms said: "It could be that in certain regions of the world in order to develop and test our services that we start with vehicles with internal combustion engines but we believe the future is nearly electric and in Europe it is a necessary requirement. If we really want to bring these services to market at scale, you can only do so with electric vehicles. I’m totally convinced of that.”

Harms said Moia’s intention was not to undermine public transport networks, but to work in collaboration with cities who were open to the prospect of new modes of transport: “We see ourselves as a partner to cities and we aim to complement their public transport systems.”

Moia’s goal is to be among the top three mobility services providers by 2025. Although it is a standalone brand, it will work closely with the other 12 brands in the group, which will continue to develop their own mobility solutions.

The new company will focus its initial activities in Germany. It is based in Berlin, but will also work in Hamburg; Volkswagen Group recently struck a three-year strategic mobility partnership with the city to make urban mobility more environmentally friendly, safer, more reliable and more efficient.

If that is successful, Hamburg will act as a blueprint for Moia’s activities in other European cities in the future.

Harms is joined on the senior management team by chief financial officer Frank Dilger and chief operating officer Robert Henrich. An advisory committe chaired by Thomas Sedran, head of group strategy at Volkswagen, will support Moia’s leadership team. Moia’s team currently numbers 50, but Harms predicts this will grow to approximately 200 within a year.

"It is likely that Moia’s services might have to rely on vehicles powered by international combustion engines in some regions in the short-term,"

Does anybody proof read articles, or is spell check enough? Muppets...!

The future you won't be driving! The shared economy is growing.

The autonomous vehicle brings a whole new economy to transport. City and to an extent urban dwellers don't need the issues and costs associated with vehicle ownership. Affordable shared ownership schemes will account for a significant share of personal transport mileage. The manufacturers will want a significant share of this market but there will be a variety of products people can buy into.

This doesn't mean the motorcar as we know it or individual ownership of your pride and joy will neccessarily disappear. The shared economy will be disruptive and Uber will feel they are well placed to benefit.

It's all about to happen

Must be a buttock clenching period all round in the automotive industry. The bets placed now will have a massive impact on financial performance in a few years time. I wouldn't put money on which manufacturers will exist in 10 years time - although I imagine VW are more likely to still be here than most.
nettingham 5 December 2016

In May of this year, it made a $300 investment in Gett