BACK TO ALL NEWS
Currently reading: Lockdown blamed as UK new car market plummets in November
UP NEXT
Autocar name that car quiz: convertibles edition

The UK car industry was heavily hit by England's second lockdown, with 42,840 fewer new cars sold in November compared with the same period in 2019.

The latest figures released by the Society of Motor Manufacturers and Traders (SMMT) show that just 113,781 new cars were registered in November, representing a 27.4% decline year on year.

During the recent second lockdown, only deliveries and click-and-collect sales were permitted. However, private demand fell by 32.2% and fleet sales dropped by 22.1%.

Although November's decline wasn't as severe as the one that occurred during the first national lockdown, the SMMT welcomed the reopening of Covid-secure car showrooms following the easing of restrictions on 2 December.

"Reopening dealerships across most of the UK will help protect jobs in retail and manufacturing and should help stimulate spending," the industry body said in a statement. "Around 31,000 cars would need to be registered every working day in December if the market was to achieve the level expected at the start of the year." 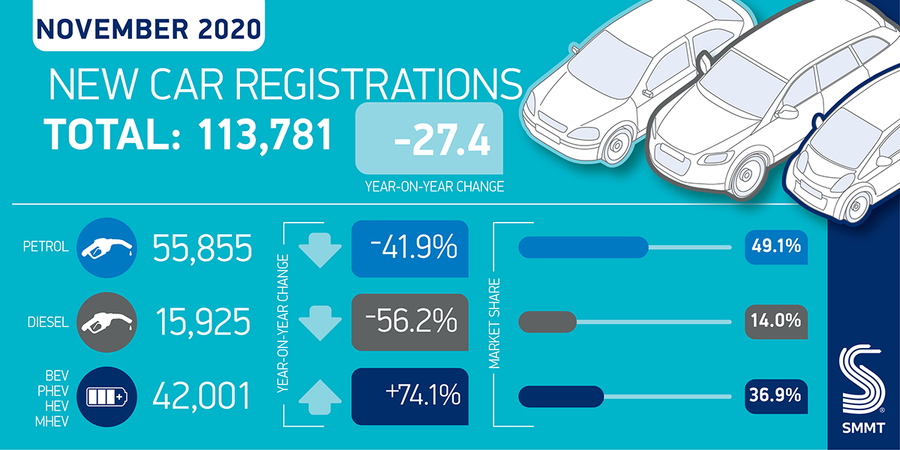 The UK car market is now down 30.7% overall this year, the equivalent to a 663,761-unit loss and representing a £1.3 billion revenue hit for the industry. Figures like these were last seen during the height of the 2008 recession.

Sales of diesel cars were heaviest hit, dropping by 56.2% compared with the previous year, and petrol model registrations decreased by 41.9% - although mild-hybrid petrols recorded a significant 232.6% increase over 2019's figures.

"Compared with the spring lockdown, manufacturers, dealers and consumers were all better prepared to adjust to constrained trading conditions," said SMMT chairman Mike Hawes. "But with £1.3bn worth of new car revenue lost in November alone, the importance of showroom trading to the UK economy is evident, and we must ensure they remain open in any future Covid restrictions."

The way it's going, you'll be test driving your potential new car at the dealers, then, buying it direct from the Factory to your Door.

If SMMT think this is because of lockdown and people not being able to get to dealerships, they are fooling themselves. It's because of the impending recession unlike anything we've seen for 300 years. Neither private buyers or fleets are wanting to buy new metal.