BACK TO ALL TOP 10s
Currently reading: Top 10 best super sports cars 2020
UP NEXT
Super SUVs

We are living through a high period for the super sports car. Never before has there been such a talented list of offerings, each with their own unique talents.

The list of 10 cars below features everything from hardcore hooligans to more delicate alternatives. There’s a car for all tastes in this segment, but the ones below are our picks of the bunch.

Aston Martin has taken a giant leap into true blue driver’s car territory with the new Vantage. Never before has Gaydon departed so clearly from its traditional preference for fairly laid-back, long-legged, old-school front-engined GT sports cars than it has here.

So much about the new Vantage – from its first-order performance level to its tight, tenacious body control, to its impressively advanced driveline specification and its on-track composure, handling precision and staying power – tells you loud and clear that it’s ready to transform Aston into a firm that can be taken seriously by real petrolheads who’ve stuck to their Porsches and upper-level BMW M cars. Better still, it's now available with a manual gearbox.

Never have you been able to drive a series-production Aston as hard as this, or really contemplate using one like you might a track-ready 911. Partly perhaps as a result of all that newfound grip and purpose, the car doesn’t quite overcome the limitations of its size and weight and involve like the greatest driver’s cars when driven on the road – but it certainly enriches everyday use as a super sports car should, and as only an Aston Martin could.

Save money with new Vantage deals on What Car?

The 570S occupies a purer and more exciting territory than its sports car rivals, but it’s also more forgiving and more comfortable than them as well.

Its performance level is exceptional, without compromise to driveability. Its handling is equally outstanding: a special mix of track-ready purpose, with on-road compliance, precision and stability – and enriched by wonderful control feedback.

It is more exotic than the Porsche 911, more delicate than an Audi R8 V10 Plus and more practical than a BMW i8. There’s little doubt that McLaren’s mid-range model is actually the car for the company to make its reputation.

Save money with new 570S deals on What Car? 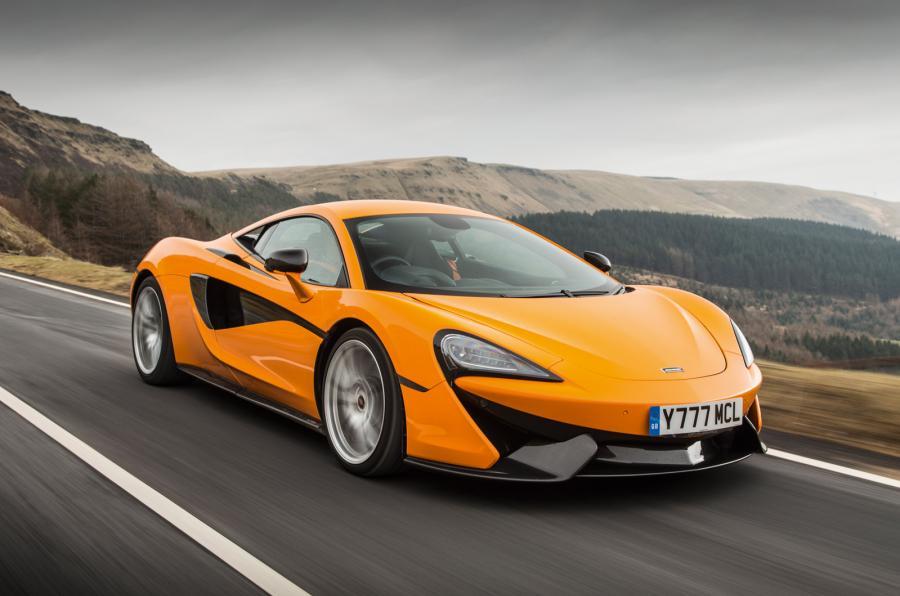 The most broadly capable model in the 991 line-up is back for the 992 generation, and once again ranks as arguably the quickest point-to-point car on the planet. Four-wheel drive and new twin-turbocharged engine tuned to 641bhp contrive to deliver a 2.6sec 0-62mph time and a top speed comfortably north of 200mph. And as with other 911s in the current range, you can also expect a first-class cabin and a degree of subtlety absent from some of the more extrovert cars on this list.

And that's a large part of the appeal with the Turbo S, which will soon be available in regular, non-S Turbo guise. Despite it's manic pace, it doesn't shout everywhere it goes, and its ability to swallow big distances makes it an authentic alternative even to GT-leaning rivals such as the Aston Martin DB11.

Naturally, it'll thrill like few else on a B-road, too. Intuivive steering and just a hint of that rear-biased weight distribution give the driver options, though admittedly the Porsche still isn't quite as playful as some on this list.

Save money with new 911 Turbo S deals on What Car?

The DB11 V8 isn’t the most refined in its class, with tyre roar and a curiously loud rustle of air passing over the base of A-pillar.

Interior fit isn’t good enough, either, even if the abundance of leather is supremely soft to the touch. The Mercedes-AMG S63 Coupé surpasses the Aston on both counts, though you’ll forfeit driver involvement if you choose the big Merc.

If you’re sitting in a DB11 V8, the AMG-sourced engine up front sets the tone for what this car can, dynamically speaking, do so well. It’s so deeply intuitive to steer. This is a hugely desirable product – one that ranks ahead of its V12 sibling.

Save money with new DB11 deals on What Car? 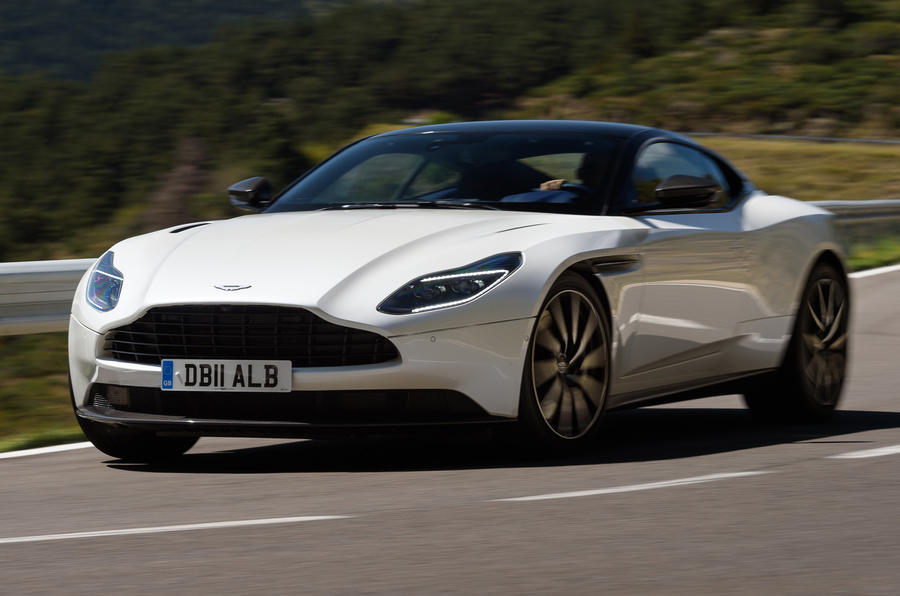 Honda has managed to deploy world-first powertrain technology with a superb lightness of touch. It has used unconventional means to perfect, rather than reinvent, the conventional junior supercar.

And it has produced a very rare breed of mid-engined exotic as a result: one that doesn’t shout about its potential or impose itself on your senses, but is instead a very mature and complete driver’s car.

Despite updates introduced in 2019 – which, among the bright orange paint-job, included detail chassis tweak and recalibrations for the adaptvie damping, steering and four-wheel drive – it could still be better equipped, nicer to travel in and a touch more luridly exciting at times. However, for its fusion talents, it deserves respect. Arguably only the McLaren 570S offers a more compelling driving experience, but it does so with a far simpler powertrain.

Save money with new NSX deals on What Car? 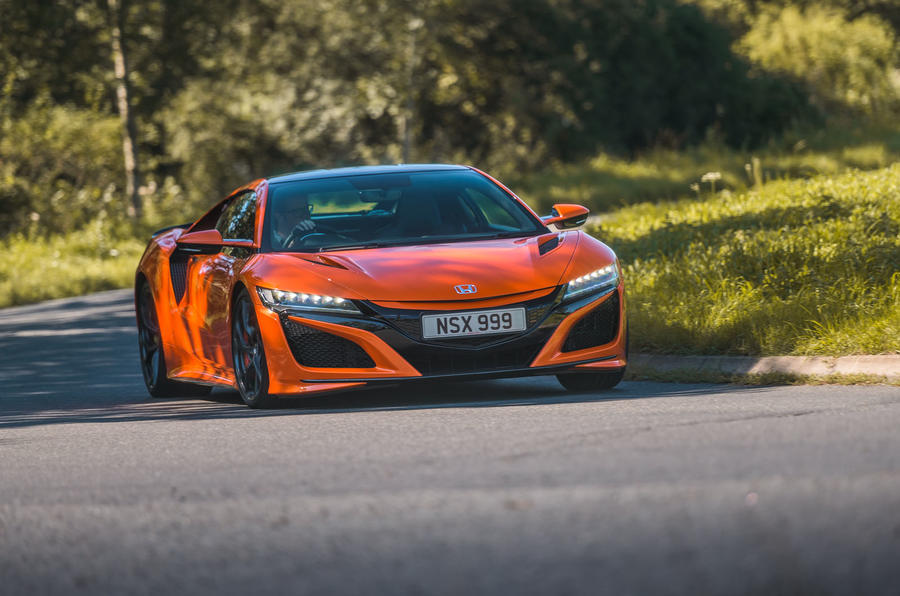 The Audi R8’s technical relation to the company’s motorsport efforts is clear. The car is a visceral, singular tribute to power and performance, noise and revs, grip and traction. It’s hugely exciting to drive, although not quite as rounded, communicative or usable enough as the very best super sports cars.

When we first drove the latest R8, we felt it had lost some of the old car’s character - trading it for a more digital form. However, with the introduction of the new R8 RWD - which, unsurprisingly, drops its front-driven axle - a good helping of that character has been restored. This new series-production model’s steering may still lack some of the talkativity you’d get from the likes of the new 911 Turbo S and McLaren 570S, but there’s an entertaining and approachable - if not totally immersive - super sports car beneath the aggressive exterior.

Save money with new R8 deals on What Car? 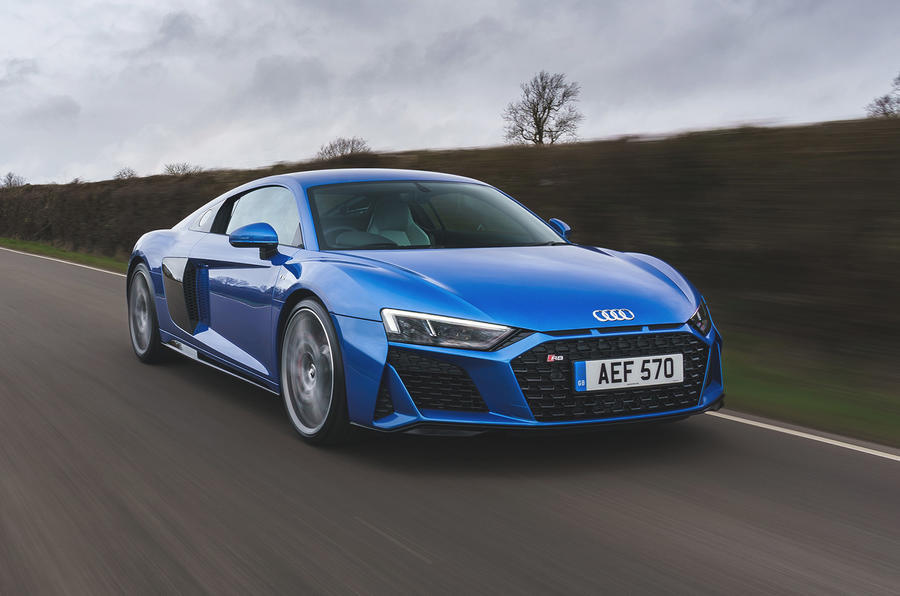 With the body structure of a supercar, an engine from a muscle saloon, suspension tuned for maximum attack on the track and yet the practicality and sophistication of an elegant coupé, or roadster, the GT is an even more bewildering addition to the sports car world than the Mercedes-Benz SLS was.

Of course, there would be times when you’d grow tired of its high-adrenalin temperament and lack of civility, sure, but the highs would outweigh those occasions. But the car is so capable – as capable as cars twice its price – it is extremely lovable, even if not quite as delicately beautiful to drive as a 911 Turbo.

Save money with new GT deals on What Car?

It may have been around for more than a decade now, but the Nissan GT-R remains one of the quickest, most capable super sports cars money can buy. The hardcore Nismo version builds on this.

There’s a more aggressive aero package that includes a sizeable rear wing, an increase in torsional rigidity, as well as tweaked springs, dampers and anti-roll bars for even greater levels of agility. Nissan says these modifications make the GT-R Nismo even more playful on the limit, which can only be a good thing. Its steering is impressively incisive and accurate, while the fact that it seems happier to send its power rearwards in order to bring its tail end into play serves to confirm Nissan’s modifications have worked as intended.

Of course, it’s still devilishly quick in a straight line too. Its 3.8-litre V6, whose twin turbos come courtesy of Nissan’s GT-R GT3 race car, produces some 592bhp and 481lb ft. Nissan don’t quote an official 0-60mph time, but it wouldn’t be a stretch to say it might well dip below the 3.0sec mark.

It might be showing its age, but the GT-R Nismo remains as brutally effective as ever.

Save money with new GT-R deals on What Car?

As the replacement for the California T, the handsomely-styled and glamorously titled Ferrari Portofino now represents the entry-level, ‘affordable’ offering in Maranello’s model line-up - if there is such a thing.

Sharper, faster and more focussed than the California T, the Portofino stands out as an exceptionally pointed sports car. Its steering is lightning quick, its gearchanges delivered with the sort of forceful, confident conviction you’d expect from the likes of a supercar. Its refreshed twin-turbocharged V8, meanwhile, now develops some 592bhp and 561lb ft, so the sprint from 0-60mph is now dispatched in an eye-widening 3.5sec. And with a folding metal roof that can be retracted in 14sec, there’s unlimited scope to bask in its rich, authentically Ferrari soundtrack.

As a sports car then, there’s much to like about the Portofino. But there’s a hitch; this is also intended to be a comfortable, fast and incredibly livable grand tourer. And given just how sharp and overtly dynamic Ferrari has now made it, this conflicted personality is tricky to overlook.

Save money with new Portofino deals on What Car?

While it lacks the dynamic sparkle or engagement of others, the Granturismo MC makes up ground with drama thanks to its high revving V8 and gorgeous, Italian looks.

The car’s steering feels old-fashioned, with the hydraulic assistance passing on the sort of low-intensity feedback that electric systems filter out as unwanted noise. Plus, the car’s chassis wants to understeer. Some will simply see sufficient appeal in a Pininfarina-designed four-seater with a Ferrari-built engine to justify the price.

It is really starting to feel its age and the segment contains many more rational offerings, but emotionally speaking, this Maserati remains a compelling choice.

Save money on new GranTurismo MC deals on What Car?