From £76,8758
The mighty 2+2 sports car that can devour supercars whole on challenging UK roads has been upgraded to make it even quicker
Open gallery
Close

Is this it? This could be it. The end. This is the 2020 Nissan GT-R Nismo, announced in the middle of 2019 and available to us just in time for 2021, and with it, it could be that the Nissan R35-generation GT-R will reach the end of the development line. Maybe.

So far, age hasn’t stopped Nissan developing the GT-R. But if you’re thinking that the relative gains must be getting smaller and smaller by now, then I think you’d probably be right.

But gains there are, and engineers there must be, looking for them, constantly tweaking and evolving everything there is to have from this brutalist sports car even 13 years after they started making it.

The first iteration of this more hardcore Nismo variant arrived in 2015. Nissan then made a series of annual changes to the regular GT-R, some of which filtered back up to the Nismo later as part of a round of upgrades in 2017, but this is the proper follow-up.

The important thing is that, on the face of it, it’s still a big 2+2 coupé with a four-wheel-drive powertrain and complex mechanicals. But here come some technical highlights over the previous Nismo. They are quite niche.

There is one less groove on the Dunlop front tyres – increasing the amount of rubber on the road by 11% – while a new rubber compound is said to be 7% more grippy. The tyre shoulder is more rounded to keep more tyre in contact with the road and, overall, ‘tyre cornering force’ is up by 5%.

The 3.8-litre hand-assembled twin-turbo V6 engine has new turbochargers, as before taken from the GT3 race car variant, but the race items have clearly been improved lately and so have these. They employ 10 vanes apiece, one less than the previous model’s, and each vane is 0.3mm thinner. If you open the throttle at 68mph in fourth gear (in manual mode), it says here that this 14.5% reduction in mass and 24% reduction in inertia mean engine response is improved by 20%.

For all the extra apparent response, power remains unchanged at 592bhp. But it has less weight to push around, too, thanks in some part to increased use of carbonfibre. New front and rear bumper and wing designs are 4.5kg lighter than the previous Nismo’s and a new roof saves 4kg and bonnet 2kg.

Then there are lighter wheels (although only by 25g each) and, more significantly, the adoption of carbon-ceramic brakes, of 410mm diameter at the front, between them weighing 16.2kg less than the previous items.

Overall, then, the new Nismo is around 27kg lighter than it was, although that still leaves its kerb weight at 1703kg. It never was a light car and it isn’t going to start now.

The dampers have been softened, though, to account for this modest decrease in mass, by some 20% in rebound and 5% in compression, with revised spring rates, too, while the power steering map has been adjusted. 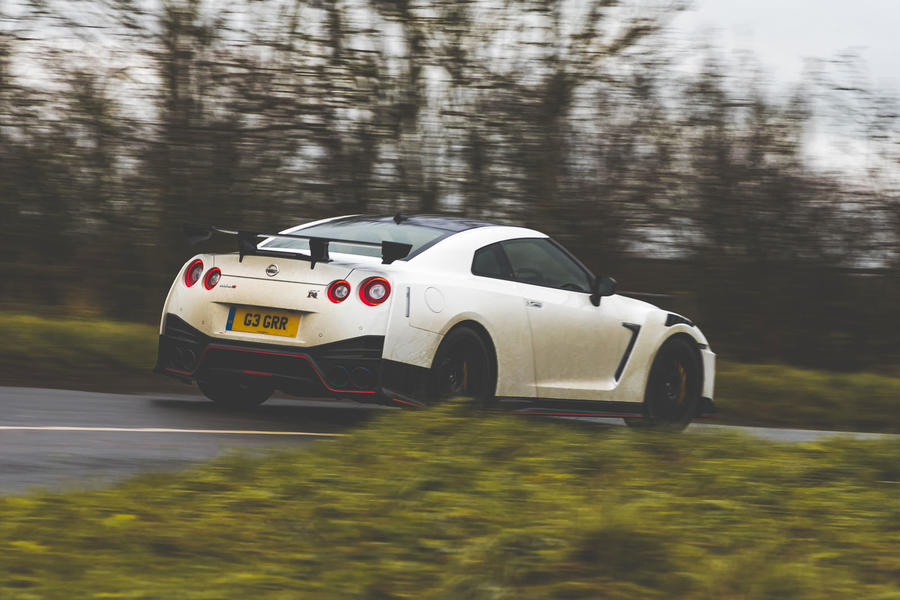 Inside, there is a fantastic suede-ish-covered steering wheel and new Recaro seats that offer brilliant lateral support. The interior got a host of upgrades in 2017, with plenty of carbonfibre on display and some nicely stitched leather. And the retention of analogue instruments and the presence of plenty of other physical buttons mean that, although visually ageing, it remains more usable than some cars in which controls have migrated to an all-seeing digital system.

But, then, it’s a supercar, isn’t it? Well. I don’t know. Supercars have two seats and an engine in the middle and the GT-R is not like that. It’s also 1703kg, yet it’s not as plush as, say, an Aston Martin, nor as compact as a Porsche 911. It’s a car that almost sits in its own class and that’s reflected by the way it drives.

It is hard and intense. There are different modes for the dampers, including Comfort, which I think might have been called that as a joke. The GT-R Nismo is not a comfortable car, grumbling over surface imperfections and sometimes when there aren’t surface imperfections, either. But it does get better as you go faster.

So, too, does the steering. At normal road speeds, it’s quite light and there’s a little bit of nothing just off straight-ahead, but then as you steer a few more degrees, a lot happens quite quickly.

Disconcerting, but again better if you go faster, where it’s heavier and less nervy and starts to transmit road feel. The brakes are good at any speed, but the best pedal feel comes when the discs are warm. Under harder braking, and on smoother roads, the GT-R is less affected by tramlining than it is if you’re driving it mildly.

High-level single-seaters and sports racing cars do this sort of thing to an extreme: if a driver fails to keep the tyres and brakes warm enough, performance and mechanical grip fall away to the extent that tyre grip runs out before the speed where aerodynamics help it go faster.

The GT-R Nismo isn’t an animal to that extent. It is a 1700kg road-registered car, after all. But similarly, you don’t get a huge amount back going slowly. And on the road at this time of year in the rain, there’s a limit to how warm you can get it.

It’s worth the effort, though. The Dunlop SportMaxx rubber (255/40 R20 at the front and 285/35 R20 at the rear) finds more purchase than you might think, the nose is direct if you bleed the brakes off gently into a corner, and then the power will shuffle itself around to allow a little rear-biased shimmy on the way out of a bend, which feels very natural and secure.

The engine is mighty, too, revving to the other side of 7000rpm with a vigorous top end and a revised titanium exhaust that rasps rather waspishly when you get there. Not that you’ll be there for long. Second gear runs to the other side of 70mph and third must be good for 100-plus. It’s all right, mother: I didn’t try it. 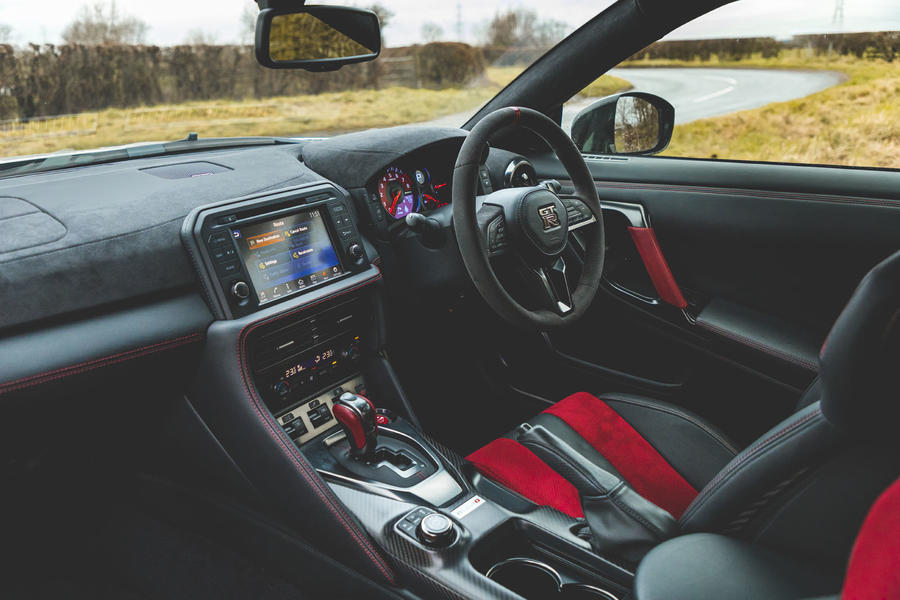 All of which adds up to a car that’s very exciting, but gets more so the faster you go.

It’s not smooth and complete like a Porsche 911 Turbo, but it’s not low and glamorous like a Ferrari 488 GTB or Lamborghini Huracán, even though I suspect it’d give either of them a hard time around a circuit.

It remains, then, in a class of one, right to the end. An end that will surely begin to heave into view soon, albeit with no let-up in this car’s detailed development or dimming of its unique appeal. 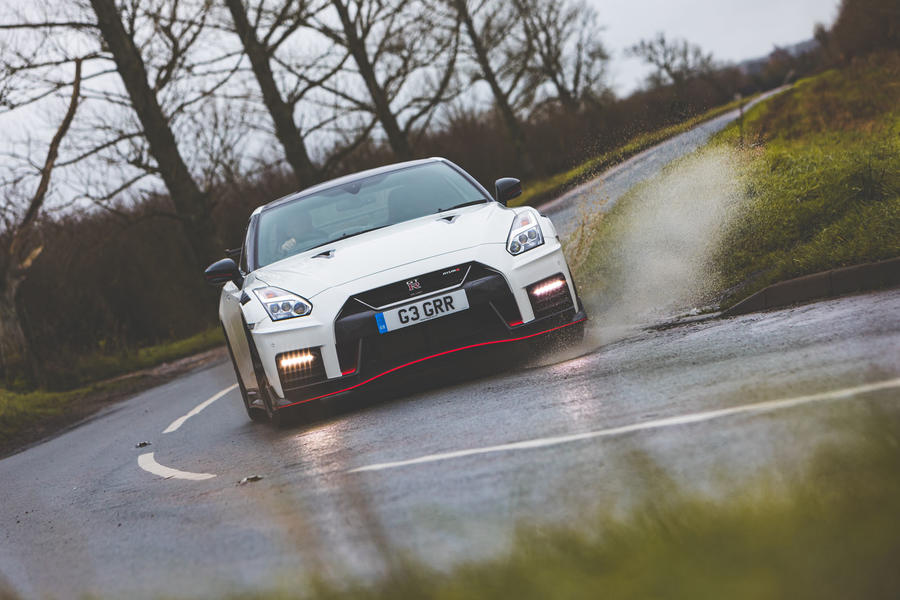 Log in or register to post comments
jason_recliner 18 December 2020
Still The One for me. I actually don't care if a Ferrari, McLaren or VW is slightly quicker. This is the daddy, Godzilla. The coolest thing on four wheels.
si73 18 December 2020
Never really heard that to be a super car, a mid engined 2 seater format was required. I've always thought of the 911 in turbo guise to be a supercar same with the 959, also the V12 vantage surely was as well, in spite of their layouts. So to me the GTR nismo is a supercar more than a sports car, and not just because of its price, which is mad considering the capability of the standard £80k ish GTR.
Oh and Nissan also refer to it as a supercar on their website. But I would definitely be aiming lower in the range as you could never call a non nismo GTR lacking in performance or ability.
NoPasaran 18 December 2020

The standard GTR was worth considering on release and maybe the next iteration or two. These cars were used for extreme tuning, but even the 997 Turbos were better and cheaper at that, the cost of converting 997 Turbo with the automatic transmission to a 1200hp monster was way lower than doing the same to a GTR and Turbos held up better as well.

Nismo GTR was never worth considering, the price was always way too high relative to competitors. 180k, well, in my opinion it is sucker price, given that current Turbo/Turbo S are way beyond GTR in terms of performance and interior. But, to each his/her own.

IT would be cheaper to get a standard car and mod it a bit, suspension, light engine mod, lighter alloys.

Great Post NoPasaran. Nothing to add. Looking forward to reading your next.

My pleasure. You will wait a long time, I do not produce many pearls. :-D

In any case, back then I was myself choosing between a new GTR (second iteration with 500 something hp) and a slightly used 997 Turbo (manual but tuned to 570). I chose Turbo. Partly because back then I was all for manuals (these days I am of opinion that Turbos are better served by auto/pdk), partly because I liked the looks and the smaller size (particularly width) of 997T. I do not regret my choice. Even now I would go and buy a Turbo, in particular the 997.2 Turbo, 530hp with pdk, I like the 997 shape a bit more than that of 992 (and the price difference, of course!)