BACK TO ALL NEWS
Currently reading: New seven-seat Ford Everest concept unveiled in Beijing
UP NEXT
Bespoke ‘Silent Shadow’ to start EV era at Rolls-Royce

Ford has presented its Everest SUV concept at the Beijing motor show.

Confirmed as previewing a new seven-seat production car for the Chinese market, the Everest is a mid-size SUV with a focus on off-road ability. It will likely be made by Ford's joint venture partner in the country, JMC.

"A vehicle like the Ford Everest concept would be a great addition to our growing stable of SUVs," he added.

Ford's corporate front-end styling features, including the firm's large trapezoidal front grille that sits alongside a prominent lower front bumper. The firm describes the Everest as being "a highly capable vehicle that is equally at home in the city or off-road".

The Everest concept is based on the Ford's Ranger pick-up. 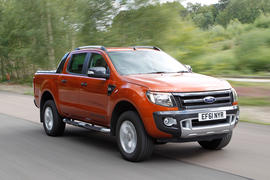 Looks better than the current Explorer

This is a bit bland but has some styling cues from the F-150 trucks and looks more like a Ford than the current Explorer. However, the Explorer came out a good year ahead of the new Range Rover and the RR has a few nods to the Ford with the front and rear light treatments so perhaps the Explorer isn't so bad after all.