BACK TO ALL NEWS
Currently reading: Throwback Thursday 1992: BMW E1 first drive
UP NEXT
MST Mk1: Is this the ultimate rally recreation?

BMW announced this week that the petrol variant of its outgoing M Series supercar will be the brand's last combustion-engined model.

This is a symbolic end to the company's first century, with BMW having started in 1917 as Bayerische Motoren Werke, producing in-line six-cylinder, water-cooled engines for the Deutsche Luftstreitkräfte's successful Fokker D.VIII fighter biplane.

Of course, the bulk of BMW's range has been all-electric for more than a decade now, with the latest G30-generation 5 Series now capable of 700 miles on each charge and supported by the latest 500kW public rapid chargers.

No wonder BMW is the market leader in EVs; after all, it kickstarted the biggest-ever shift in the automotive industry with the ahead-of-its-time 1 Series of 1995.

This four-seat city car left rival manufacturers in the dust, being the first EV to go on general sale and having an impressive 155-mile range and two-hour rapid charging time.

The words above are what Autocar's David Vivian probably expected we'd be writing in 2018 after experiencing BMW's handsome, effective and smartly packaged E1 concept in Munich back in 1992. 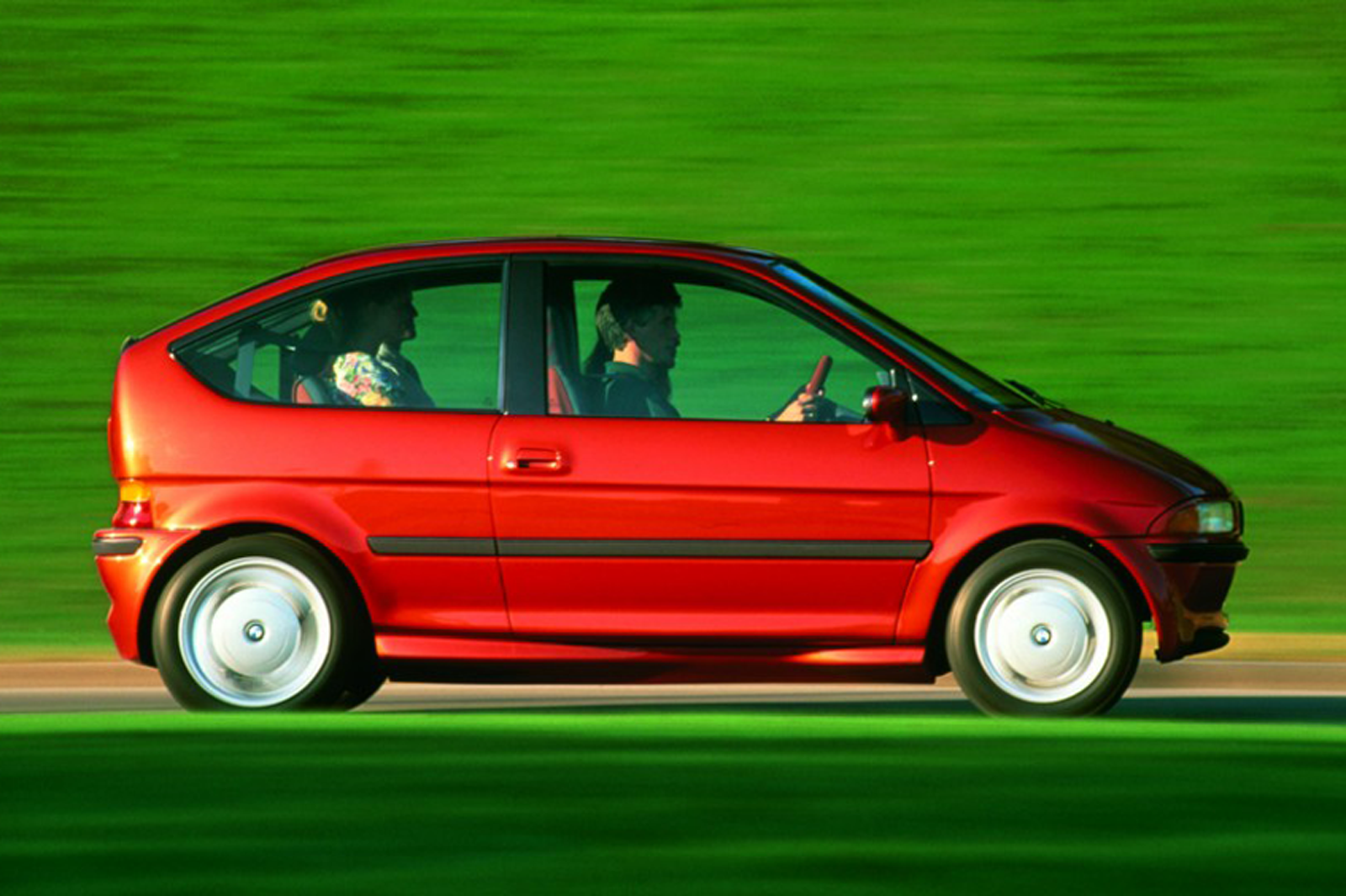 "I like it better than any other city car I've tried," our man wrote on 16 December of that year, "not because it runs on environmentally responsible electricity but in spite of it.

"The E1 doesn't have to apologise for its electric motor because it places it in an entirely modern context: it has a great shape, even better space efficiency, a superb ride, crisp handling, a whisper-quiet drivetrain and a truly seamless transmission. Even by BMW standards, it's a hard hitter." 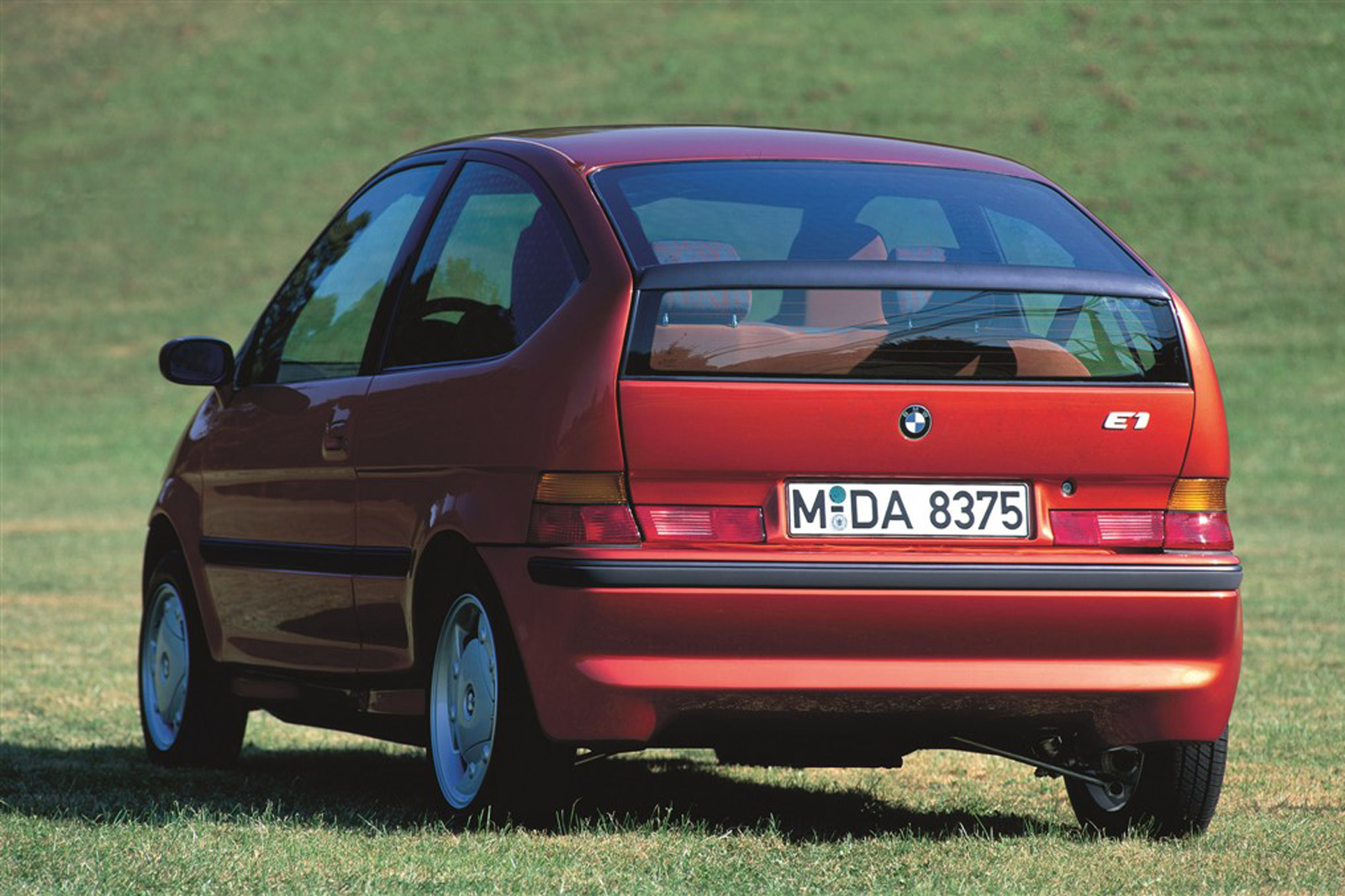 The E1 entered development in 1990 with Technik, BMW's specialist think tank (and the outfit that brought us the "excellent but ill-fated" Z1 sports car), as a test bed to prove whether an electric car could work in the real world.

This was partly due to California's demand that 2% of new cars sold in the state had to be zero-emissions by 1998; the same catalyst for the creation of the General Motors EV1.

The E1 was 3460mm long, 1648mm wide and 1500mm tall – roughly the same as today's Fiat 500 but perhaps best comparable to the Audi A2. Its structure was all-aluminium and its body made from recycled plastic.

Power was sent from a 19.2kWh sodium sulphate battery through a direct-drive motor on the rear axle, giving a total of 45bhp and 111lb ft.

Vivian explained: "The E1 weighs a modest 900kg (battery included). Part of the weight saving can be credited to its custom-built light alloy wheels – 14in front, 16in rear – that are essen­tially just outer rims that fit directly onto the drum brakes. Doing it this way shaves 20kg from the overall weight. More­over, energy generated during braking is fed directly into the battery. "You have to plug the E1 into a domestic power supply at the end of the day for recharging; it takes between six and eight hours. How far it will have travelled at this point depends largely on the way it has been driven. The maxi­mum range is about 155 miles."

That's a remarkable claim, given that today's lithium-ion-battery-powered (and much more powerful) BMW i3 is capable of a maximum of 158 miles on the WLTP cycle (or around 125 miles in reality).

Vivian continued: "But, lively as it is, the E1 doesn't have so much performance that 'easing back' is a realistic option. Top speed is 75mph, 0-30mph takes 6.0sec and 0-50mph requires 18.0sec. A few hours of cut and thrust in the city followed by a blast on the motorway will reduce the range to 125 miles or less."

But, like the i3, driving the E1 was "a good experience" – it was "simply a great way of getting around, not least because it's a car you want to sit in and drive".

Indeed, "the simplicity of the facia is hugely appealing", we wrote. 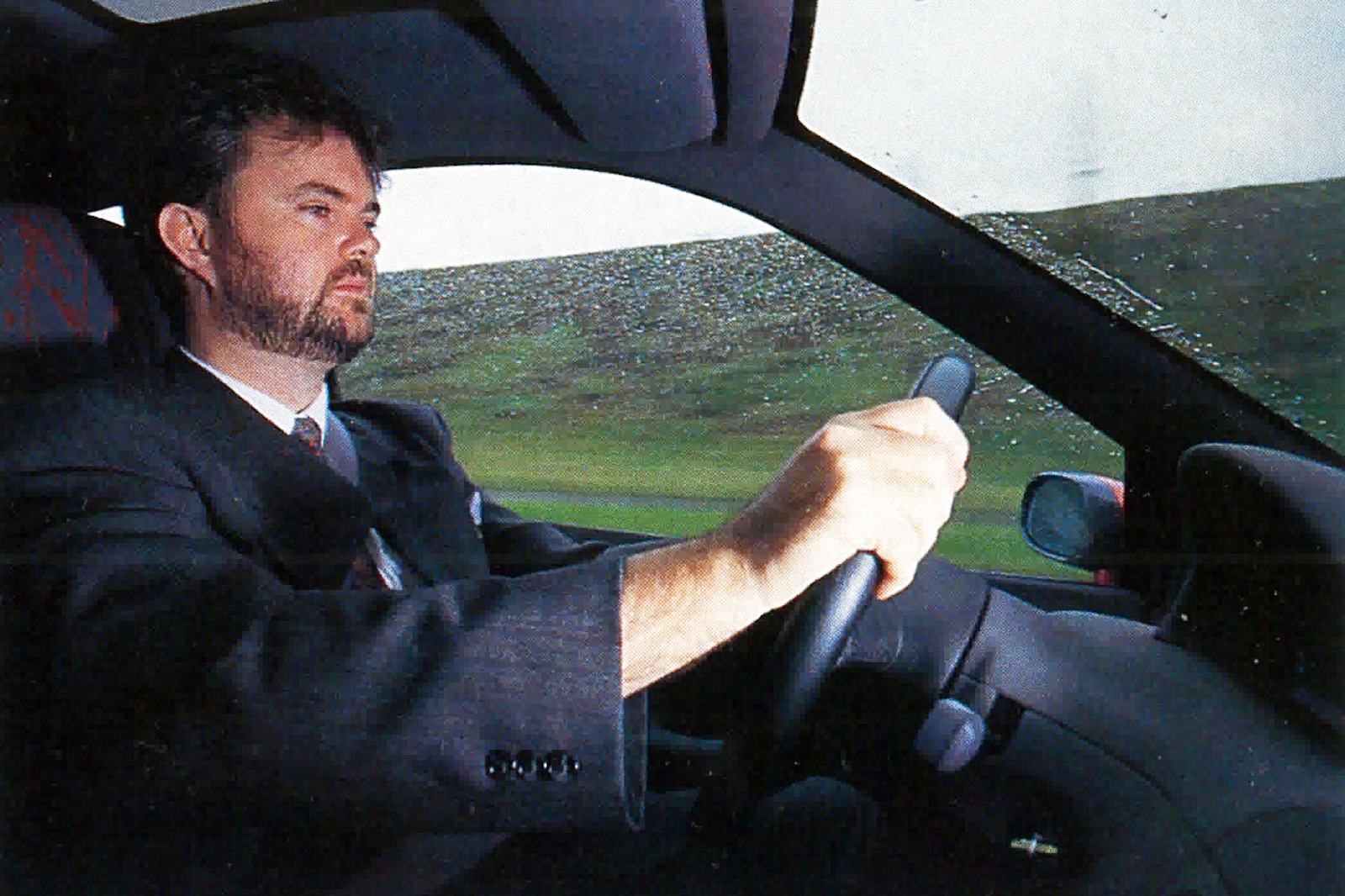 "The tiny transmission joystick, just a finger's stretch away from the steering wheel rim, is a joy to use: flick it for­ward to move ahead, back to reverse and to the left to acti­vate the electronic handbrake. The rudiments of driving don't come any easier.

"Which isn't to say that the E1's keen sense of minimalism is all-pervading. Count a glass sliding roof, air conditioning and a first-class stereo among its creature comforts. Soft-touch materials and drum-tight build quality smack of BMW's mainstream models. The light­weight seats give proper sup­port and have integral seatbelts.

"You twist an ignition key to start, just as in any other car, but the only things that will tell you the E1 is running are lights on the facia and a faint hum.

"Flick the transmission joy­stick forward and nothing happens until you press the accelerator. Press it as lightly as you dare and the result isn't altogether gratifying. A mild thump presages a rather gritty, jerky crawl forward. The problem is one that Technik acknowledges. But mostly it's down to the nature of direct-drive electric motors. 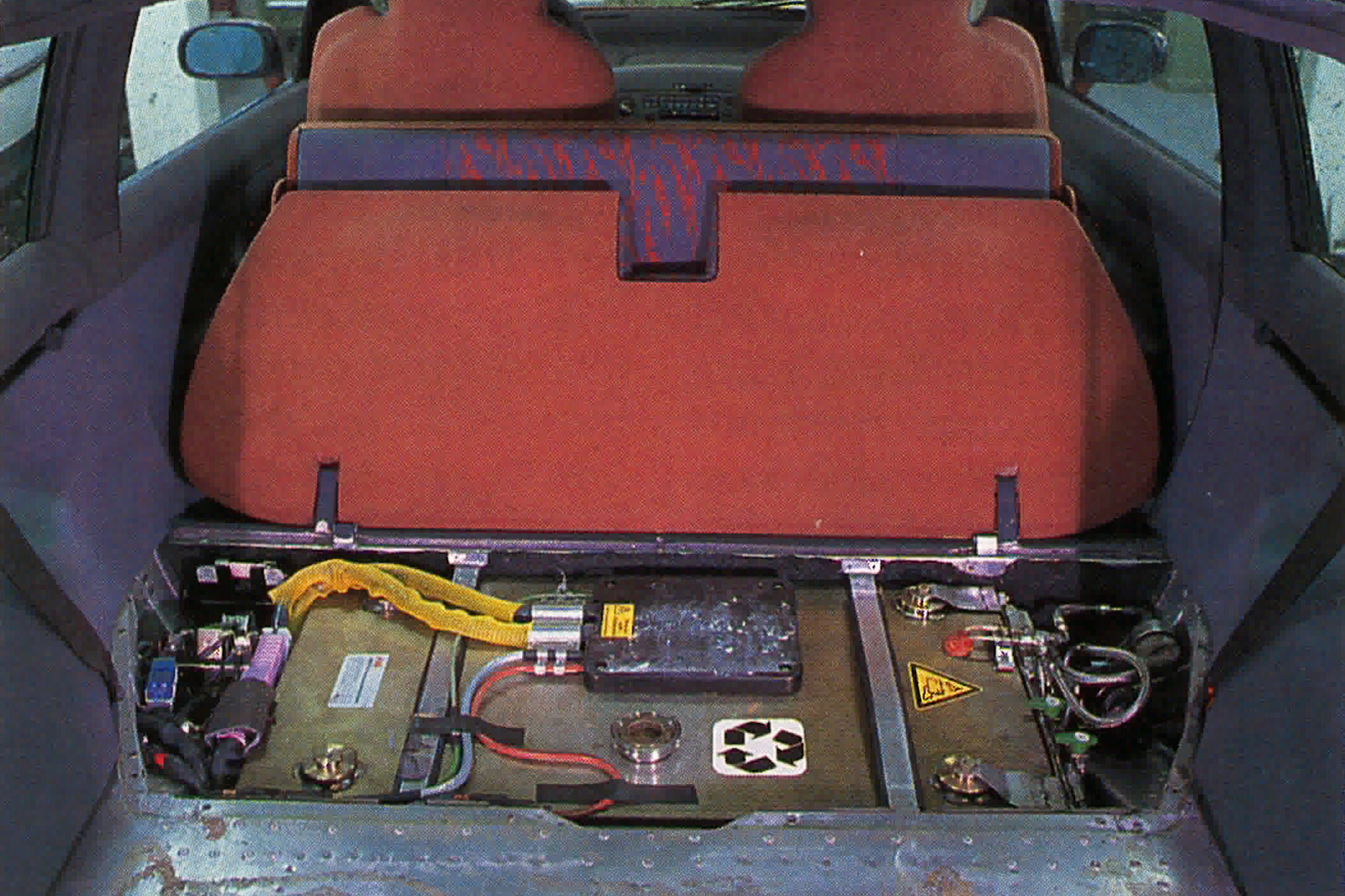 "As is the virtually silent running. From outside, it looks like magic — noiseless move­ment, as if by telekinesis. From behind the wheel, the illusion isn't so complete, but the low-level motor whine is quiet enough to be drowned out by the noise of other traffic.

"Flatten the accelerator from rest and the E1's take-off is much more impressive: smooth, fluid and surprisingly brisk. It will keep up with anything that isn't trying, partly by keeping on keeping on while conventional cars are changing gear. This is truly stepless progress: it makes even the best CVT seem crude.

"The brakes are quite heavy but progressive and secure, and the unassisted rack and pinion steering isn't exactly feather­weight. But the E1 doesn't feel leaden or unresponsive. Helm responses are fluent, crisp and communicative, turn-in accu­rate without much body roll.

"And, with its low centre of gravity and main mass located between the axles, handling is tidy and nimble. The central­ised weight also helps the ride that, in my experience, sets a new standard for small cars. For small-bump absorption and suppression of harshness, it feels like a much bigger car.

"The E1 is a big car, of course; perhaps the first fully thought-through and genuinely usable electric car." That's some praise but, even though a Mk2 E1 (pictured above) was produced for the 1993 Frankfurt motor show, ironing out the original's seemingly very few flaws, a production model never came to fruition.

This was down to California's mandate for 1998 being dropped and, no doubt, the prospect of better battery technology and the lack of a public charging infrastructure. We had to wait another 21 years for the introduction of the i3 to see the first 'proper' BMW EV.

And that's a huge shame because, as Vivian said back in 1992: "If this is the future, it works. I have a good feeling about BMW's next electric car."

The legislation was dropped for political reasons, that can happen anywhere in the world. Another country or the EU could have picked up the gauntlet but no one did, not for years at least. So I m not really sure why youre having a pop at the Americans, its human nature you want to be having a go at.

I am struggling to see your point here. California generally has led the way in emissions legislation. What would be better is a genuinely global, science-led approach that helps car manufacturers move away from their high volume dependency, but we are a long way from that.

If only they could have forgone the electric version and made small 3-cylinder petrol engines for these, we might have had a properly interesting class of small cars on Europe's streets rather than quirks like the smart and my beloved A2 that went by largely unloved by the buying public.
Will86 15 March 2018

Surprisingly accurate vision of the future

The similarities between this and the i3 are quite stiking; the overal shape of the car and even the floating dash design. In some ways it's disappointing it has taken so long for electric cars to develop.