In his world championship-winning year, Hawthorn used the pages of Autocar to praise the performance benefits of the auto ’box
Share
Open gallery
Close
Share story

Would Lewis Hamilton prefer it if his Mercedes-AMG F1 was fully automatic?

This may sound a modern gripe, yet the first mass-produced car with an automatic transmission was an Oldsmobile in 1940, a decade before Formula 1’s inaugural grand prix. The situation of a driving icon turned iconoclast did actually happen, 58 years ago, in an article in Autocar written by 1958 champion Mike Hawthorn.

Despite “sharing a genuine love of the vintage car” with the “tweedy motoring experts with moustaches as sweeping as his statements, and possessed of a firm belief that anything new is a bad thing”, Hawthorn nonetheless had his own ideas about technology.

“For everyday motoring on what, laughingly, passes for a road system in this country, I would not choose anything but the most up-to-date and completely equipped motor car I could lay my hands on,” he wrote. “For this reason alone, I would go for an automatic transmission on a car.”

His reasoning was simple: “With the automatic ’box, optimum performance may be constantly utilised to the full, because the maker of the car has predetermined maximum speeds in relation to maximum power output. 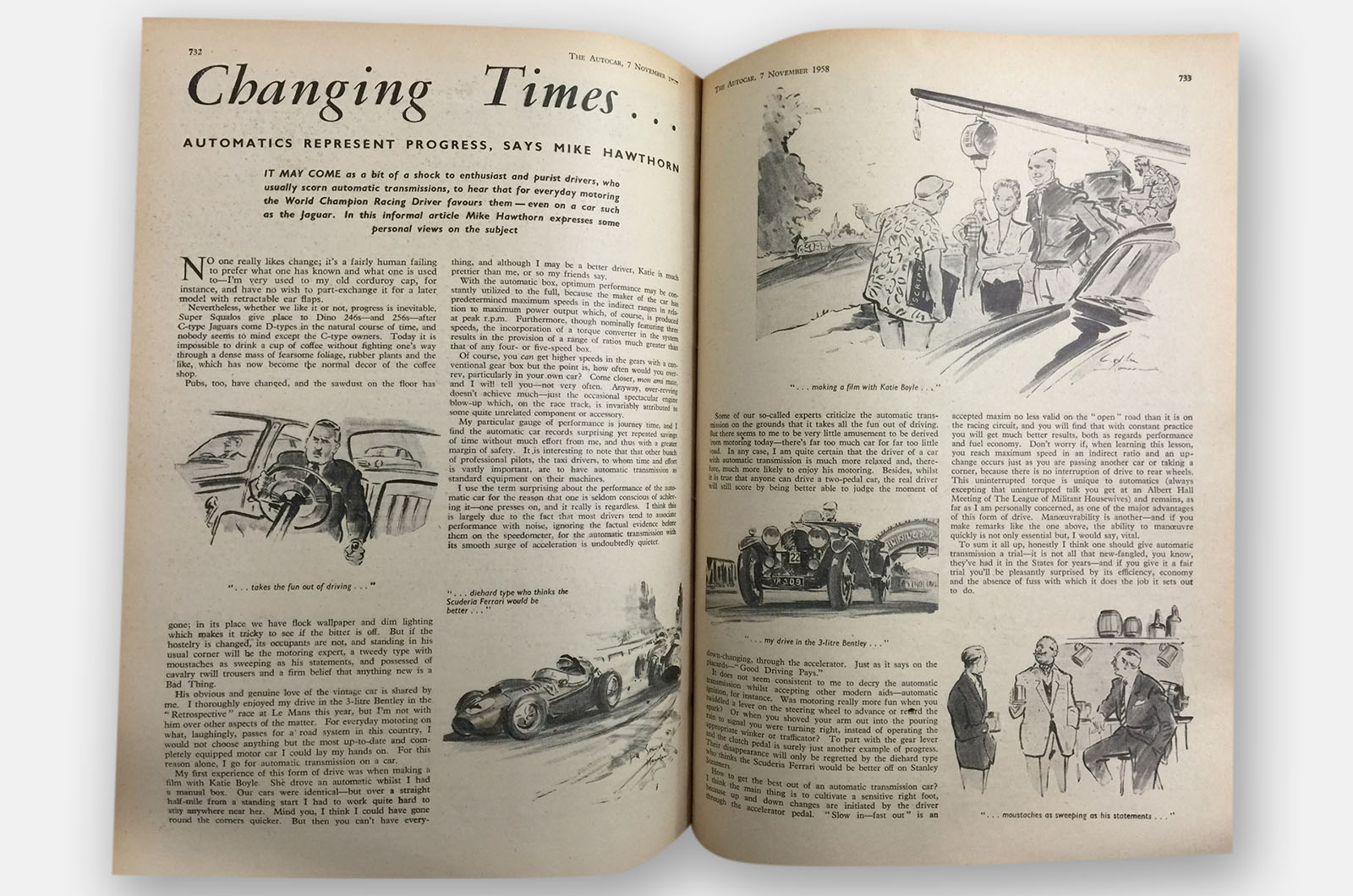 “My particular gauge of performance is journey time, and I find the automatic car records surprising, yet repeated, savings of time without much effort from me, and thus with a greater margin of safety.” He noted that taxi drivers at the time also favoured the automatic gearbox for the same reason.

Hawthorn’s cocktail of light mocking mixed with heavy persuasion continued: “Most drivers tend to associate performance with noise, ignoring the factual evidence before them on the speedometer, for the automatic transmission, with its smooth surge of acceleration, is undoubtedly quieter.”

Amusingly, at a time when Queen Elizabeth II had been on the throne for just six years, it seems that many Autocar readers were levelling exactly the same criticisms as they are now, when Her Majesty has been on it for 64.

Hawthorn explained: “Some of our so-called experts criticise the automatic transmission on the grounds that it takes all the fun out of driving. But there seems to me to be very little amusement to be derived from motoring today – there’s far too much car for far too little road. In any case, I am quite certain that the driver of a car with an automatic transmission is much more relaxed and, therefore, much more likely to enjoy his motoring.

“Don’t worry if you reach maximum speed at an indirect ratio and an up-change occurs just as you are passing another car or taking a corner, because there is no interruption of drive to the rear wheels.”

Hawthorn concluded in a style perhaps not in keeping with the political correctness of the modern day but redolent of the time: “This uninterrupted torque is unique to automatics (always excepting that uninterrupted talk you get at an Albert Hall Meeting of The League of Militant Housewives) and remains, as far as I am personally concerned, one of the major advantages of this form of drive. Manoeuvrability is another – and if you make remarks like the one above, the ability to manoeuvre quickly is not only essential but, I would say, vital.”

4 August 2016
“With the automatic ’box, optimum performance may be constantly utilised to the full..."

LJK Setright used to argue much the same thing, back in the '80's...

4 August 2016
interesting part of this is Hawthorn's comment about "what laughingly passes as a road system in this country." God knows what he'd think of it today! One can only speculate if today he'd be excited by the advent of technology about to make the driver completely redundant.
I'd also forgotten that Autocar - like The Motor - used artist's drawings instead of photographs on so many occasions. Does anyone know why? The sling around the neck camera, more or less as we know it know, was in common use in the 50s.

So much easier for commuting

4 August 2016
So much easier for commuting on our congested roads, no more 1st-clutch-clutch-2nd-clutch-clutch-1st etc. etc. just stop and go.

However for an empty road, a manual gearbox in a sorted car is perfect.

4 August 2016
Forgot to mention the old school auto boxes where heavier, more expensive to build, used more fuel, sapped more power, were bigger, changed slower, more complex, accelerated slower and usually had one less gear than manual boxes. Other than that they were fine, especially for those who were to useless to operate a clutch.

4 August 2016
Interseting take on things and TBH mostly anyone who isn't skilled in heel and toe would likely be faster in a manually controlled old skool auto as per my bmw E39, the real "issue" with manual is the change down from speed without unsetling the car, I find with the auto I can hold a little throttle and blend-in the downshift quite nicely thanks..so in my opinion manual gearshifting is better for people who have had "heel and toe course" not so good if you've not had the training at a race track which I believe most of us haven't.