BACK TO ALL NEWS
Currently reading: Driving the Dodge Viper Venom 600 – Throwback Thursday
UP NEXT
Motoring heroes: the most inspiring people in the car industry

In 1997 we got behind the wheel of a car that was incredibly unrefined and very loud, yet somehow unimaginably desirable
Share
Open gallery
Close
Share story

The Dodge Viper has always been a deviant. A dissident, even, given that it blasted away from Chrysler’s 1980s zeitgeist of exceedingly forgettable models, such as the boxy Dodge Aries and the beige-personifying Plymouth Caravelle.

The emergence of the low, long-bonneted, cab-rearward Dodge Viper RT/10 concept at the 1989 Detroit motor show captured the imagination and, since 1992, with the arrival of the first production version, three generations and countless variants of this car have thrilled us. But after 25 years of production, 2016 will mark its end.

Steve Sutcliffe drove the car for Autocar and wrote: “The moment you fire this monster up, you take it seriously. The backdraught out of those two industrial-sized tailpipes has sufficient force to blow a small child several miles across the neighbourhood.

“The Venom 600 is painfully, fantastically loud. I swear it has pedestrians perpetually free-falling over hedges for cover.”

On the road, though, it wasn’t all fun and games. “It’s not especially civilised,” said Sutcliffe. “Or all that sociable. Drive it around for an hour anywhere and you’ll receive at least one thumbs-up, as well as a number of onlookers who think that because you drive a car like this, you go to bed alone at night, but not necessarily to sleep. 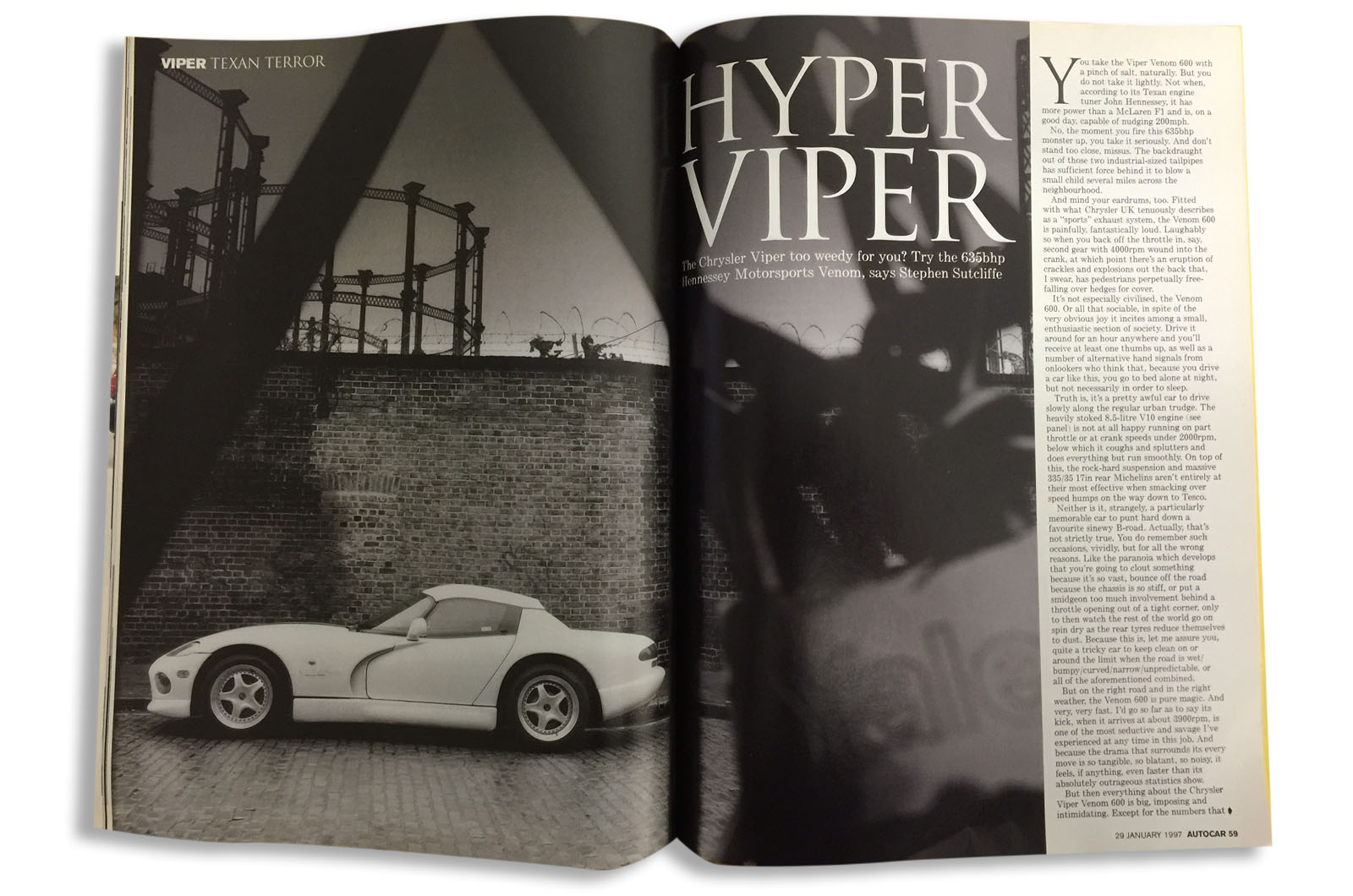 “Truth is, it’s a pretty awful car to drive slowly along the regular urban trudge. The heavily stoked 8.5-litre V10 engine does everything but run smoothly. On top of this, the rock-hard suspension and massive 17in rear Michelins aren’t entirely at their most effective when smacking over speed humps on the way down to Tesco.”

Sutcliffe wasn’t too impressed with “punting the Viper hard down a favourite sinewy B-road”, either. “Paranoia develops that you’re going to clout something because it’s so vast, bounce off the road because the chassis is so stiff, or put a smidgen too much involvement behind a throttle opening out of a tight corner, only to then watch the rest of the world go on spin dry as the rear tyres reduce themselves to dust.”

Why then, you might ask, should we now mourn the Viper in all of its extreme iterations?

Well, as Sutcliffe wrote 19 years ago: “On the right road and in the right weather, the Venom 600 is pure magic. And very, very fast. I’d go as far as to say its kick, when it arrives at about 3900rpm, is one of the most seductive and savage I’ve experienced. And because the drama that surrounds its every move is so tangible, so blatant, so noisy, it feels, if anything, even faster than its absolutely outrageous statistics show.”

These statistics included the fastest 30-70mph time Autocar had witnessed this side of the McLaren F1 – and the Viper achieved it in the pouring rain.

Sutcliffe concluded: “Just occasionally the thumpy ride, fidgety steering, clonky gearchange, noisy tyres, squeaky cabin, atrocious low-rev engine manners, 14mpg thirst, dubious wet-weather handling and awful motorway refinement get you down. Then again, hammering out of a roundabout, exhaust ablaze, world behind you, feeling about as great in a car as it is possible to feel, the point about this incredibly OTT vehicle becomes painfully clear. What a fabulous toy for the rich.”

The car that got me into cars

21 July 2016
My Dad bought me a 1:18 model Viper RT/10 when I was 6 or 7 and I was hooked from the moment I saw it. Something utterly unique about the styling and the size of the engine. I got to drive a 2nd generation Viper a few years back, utterly terrible car but still I love it.