BACK TO ALL OPINION BLOGS
Currently reading: How I fell in love with cars: Colin Goodwin
UP NEXT
Matt Prior: Why the M500 is a new hope for Noble

How I fell in love with cars: Colin Goodwin

Neither my mum nor my dad drove when I was a kid so it was a life of buses, trains and walking to school. Trips in cars were very memorable even if it was only a ride in my big sister’s Austin A30 van. Sometimes she let me do the steering sat on her lap. Occasionally I got a lift to school with a friend whose mum drove a Morris Minor Traveller but one Saturday this friend’s cousin came to collect us from school.

He drove a red E-Type roadster. This was the late 1960s and our parents’ views on health and safety, especially where cars were concerned, were somewhat different to the Isofix era of the 21st century. None of the parents collecting their kids even commented when five of us managed to squeeze ourselves into the Jag. Two on the passenger seat and three arranged along the scuttle and clinging onto the seat backs.

I can’t remember the cousin’s name but he drove like a nutter. It was hard to hang on but my God what a ride. It was nearly 50 years ago now but I remember it like yesterday. The noise of the 4.2-litre engine (I was clued up on E-Types and had several model ones), the sensation of cornering and the acceleration.

I remember our driver yelling that we were ‘doing 90mph’, which was committed in leafy Surrey. Those on the back were struggling to still hold on but I was mesmerised by the speed. I had seen 70mph riding in my aunt’s Triumph Vitesse convertible (also heavily laden with children) but 90 was a personal best. We might have hit my first official ton but by this time we’d managed to crouch down behind the seats to get out of the slipstream. 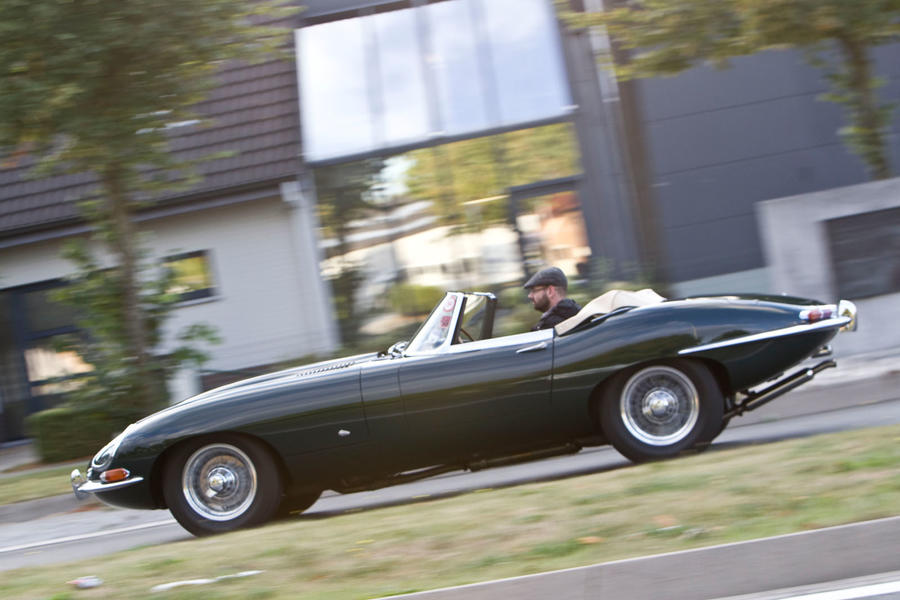 I loved rides in any car, even the Minor Traveller and A30 van, but it was that ride in the E-Type that really lit the fire. Beforehand I just liked cars and machines like road rollers and dumper trucks and even my dad’s Suffolk Colt lawnmower. That Jaguar, however, made me fall in love with fast cars and speed.

I’ve come close to owning E-Types on several occasions. Just writing this makes me want one afresh. I think it’s only a matter of time before this 50-year itch is properly scratched.

Opinion: Jaguar sales are toppling - new metal must bring them up

Whilst not in the same league

Whilst not in the same league, I used to go to school in the back of a reliant van, there'd be 3 or 4 of us sat on the floor in this three wheeler van, also remember sitting in the boot of a mini estate with a mate getting lifts, I wouldn't dream of doing similar now, amazing how it wasn't even considered dodgy back then.