BACK TO ALL OPINION BLOGS
Currently reading: Matt Prior: Vauxhall's VXR isn't dead, or is it?
UP NEXT
Matt Prior: There's no shame in liking the Rover Streetwise

Matt Prior: Vauxhall's VXR isn't dead, or is it?

It’s not dead. That’s the official line about VXR, Vauxhall’s performance brand of the past 14 years.

But, well, doesn’t it somewhat feel like it is? GSi is back, after all, the model derivative that gave its life so VXR could be born in the first place. Albeit, now, GSi is reserved for Vauxhall’s lukewarm rather than entirely hot models. So, officially, VXR lives on.

Except that the only places it still lives on are the ancient Corsa VXR plus, according to the price lists, the GTC (the even older three-door Astra) and the VXR8/Maloo, which I doubt is true unless there’s a stock of unregistered ones somewhere – great, but unlikely – because it ceased production in Australia last year.

In Australia, the Commodore, which we know as the VXR8, has been replaced by a new Commodore based on the Insignia we get here. That’s available with a V6 – like our old Insignia VXR was – so the new Insignia could, theoretically, have such a performance flagship. However, we’re told with some fanfare, to prove the new Insignia GSi’s performance credentials, that it’s considerably faster than the previous Insignia VXR around that German racetrack you weren’t going to take either of them to anyway, so you can forget that shonky old version.

Which leaves what? A VXR website that doesn’t seem to have been updated in two years (“We are now pleased to announce details for the 2016 VXR Track Experience”) and surely the most convoluted back catalogue of initialisms in motoring by which to identify Vauxhall’s performance products.

Over the years, we’ve had SRi, GTE, Turbo, GSi and VXR. What do they each mean? What does each do?

In some ways, it feels unfair to add HS or HSR to that list, given that they were versions of a car as old as the Chevette. Until you remember that the Chevette HS was created two years after Volkswagen launched the Golf GTI, a brand, model and performance derivative you’ll know about – that everyone knows about – because they still make it now.

And that’s my point: all of Vauxhall’s derivatives have been created with the best intentions, but – and I mean this in the literal, not derogatory sense – who cares? Most people do not care about cars, and those who do will not always care about a brand. And of those who do, there are fewer still who care about individual models and derivatives.

To get VXR into people’s psyche, then, Vauxhall spent more than a decade shouting it from rooftops. It branded its BTCC team VX Racing. It created a competition to find a racing driver. It imported Australian cars and re-engineered the VX220. In marketing, advertising and in dealer and customer support, it will have spent millions building up a new performance brand when it already had several perfectly decent ones. And, ultimately, for what? To say that the new GSi is better than it anyway? In marketing, as in management, in politics, in so much in life, indecision is worse than a suboptimal decision. Once you’ve got a brand, stick with it. 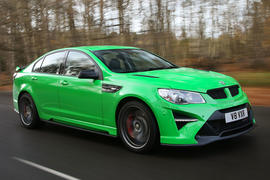 Perhaps VXR will race back, but with Vauxhall now owned by PSA, who knows what form, if any, a true performance flagship would take? If VW or Peugeot or Honda were bought out tomorrow, you’d know what their fast cars would be called.

Maybe a pre-cursor to Peugeot

Maybe a pre-cursor to Peugeot killing off the entire Vauxhall brand?...

Your comparison with VW’s

Your comparison with VW’s handling of the GTI badge says it all. Golf GTIs lost their way in the 1990s, but VW went back to the drawing board and reinvigorated the badge with the Mk5.

GME rarely showed that they had any real idea what they were doing. This latest Insignia GSi will be a flop too.

I look at it another way.

High performance Opel/Vauxhalls means higher emissions and with PSA now having to get O/V into line to meet latest EU regulations I don't see them adding VXR/OPC models until they have the O/V brands average emissions into line.

The current line-up GM sold to PSA is way off track of getting into line with these regulations and to add higher performance modles would further blow that off target.

Usual doom and gloomers will slag O/V off, but here is hoping PSA will allow them to get the engines into line (including hybrid/electric tech that GM held off on) and then maybe we'll see SRi/GSi/VXR as the performance steps.

I used to be a Vauxhall Fanboy...

...as a kid and into my teens, but for as long as I can remember, I found the changing monikers for their sports models frustrating; GTE worked fine and GTE 16v gave a good idea of the spec of that model and where it stood in the model line-up. But then they switched to GSi for the Corsa and Astra, but used GSi2000 16v for the Cavalier (followed by Turbo 16v 4x4), and GSi3000 24v for the Carlton. There was no consistency. VXR looked like a way of saying "This is our fastest, most sporting version of this model" and returning to a simplified approach. Maybe VXR will mean something different in the future; I like the thought, as per opelvaux's comments that being part of the PSA group will allow Vauxhall/Opel to take a different, and more contemporary approach to their flagship models, using hybridisation to improve performance, but keep economy/emissions at affordable levels. Sadly though, I no longer get excited by the prospect of a new flagship Vauxhall, and will miss the affordable V6 or V8 super saloon as an alternative to the usual suspects.

Marv - completely agree.  I would love to have seen a V6 Vauxhall flagship.  I do see hope though.  I look at PSA and what they are doing with Citroen and Peugot (less so at DS at the moment) and there are some decent looking car.

Peugot especially are looking good inside and out and they have managed to improve profitability to approx 7% per vehicle.  O/V currently sits at approx -2.5% per vehicle sold, PSA have proven they can do it with PSA cars so I hope that works with O/V.

As I mentioned above GM tech was never class leading and O/V were starved of investment, but I look at the cars now and they have the most cohesive design O/V have had in a long time.

That is the problem

18 March 2018
No-one has an issue with Vauxhall being RHD Opels (apart from rebadged Holden exotica). But if you are trying to build a performance sub-brand - HF, Cupra, GTI, R, M, AMG, RS, you name it - then the ideosyncratic badging (Opel Performance Center vs VauxHallRacing) does become an issue and perhaps GSi had more of a chance to become recognised at a European level.

The only future I can see for Vauxhall as a British brand or as a brand at all is to be bought up by someone like JLR and turned into a Skoda rival as was speculated a few months ago.  Might work better than resurrecting Rover.  Start off by building cars under license from GM/PSA and then gradually putting together a range in collaboration with Chery and TATA.

As soon as PSA joined they must have looked at immediate slashing of unnecessary vanity projects - VXR insignia had to be top of that list surely, nice to have but probably a very tenuous business case.

After all the energy trying to build up the VXR/OPC brands, a bit of a shame, but not really a surprise. New owners invariably bring a change in direction.

The VXR bit should be sent on its way, given its P45, it’s Gold Watch, a big pension pot, what Vauxhall need is five series, an AMG, Alpina Car, better built than previous iterations that came out the factory door.....