BACK TO ALL NEWS
Currently reading: First ride: Vauxhall Insignia GSi – is it a true driver's car?
UP NEXT
Ford backs call for European ban on new ICE cars from 2035

Vauxhall is reviving the GSi badge to grace its new Insignia performance flagship. Can it rival the Ford Mondeo ST-Line?
Open gallery
Close

The weather is terrible or ideal, depending on your outlook.

Wind-propelled sleet lashes us most of the time, coating the road so completely with little round ice balls that you have to watch your step. Now and then, strong sunshine melts some of the balls, so as well as being icy, the road is streaming wet. Of grip there is very little.

For ex-DTM champion Volker Strycek, the leader of our little test party, these are perfect conditions. A naturally optimistic character, he’s visibly excited by today’s job. We’ve come to these elevated Welsh roads above Bridgend, famed for the way they challenge cars as much as drivers, to see how Vauxhall’s soon-to-be-launched Insignia GSi performance saloon copes when the going gets tough in the UK. 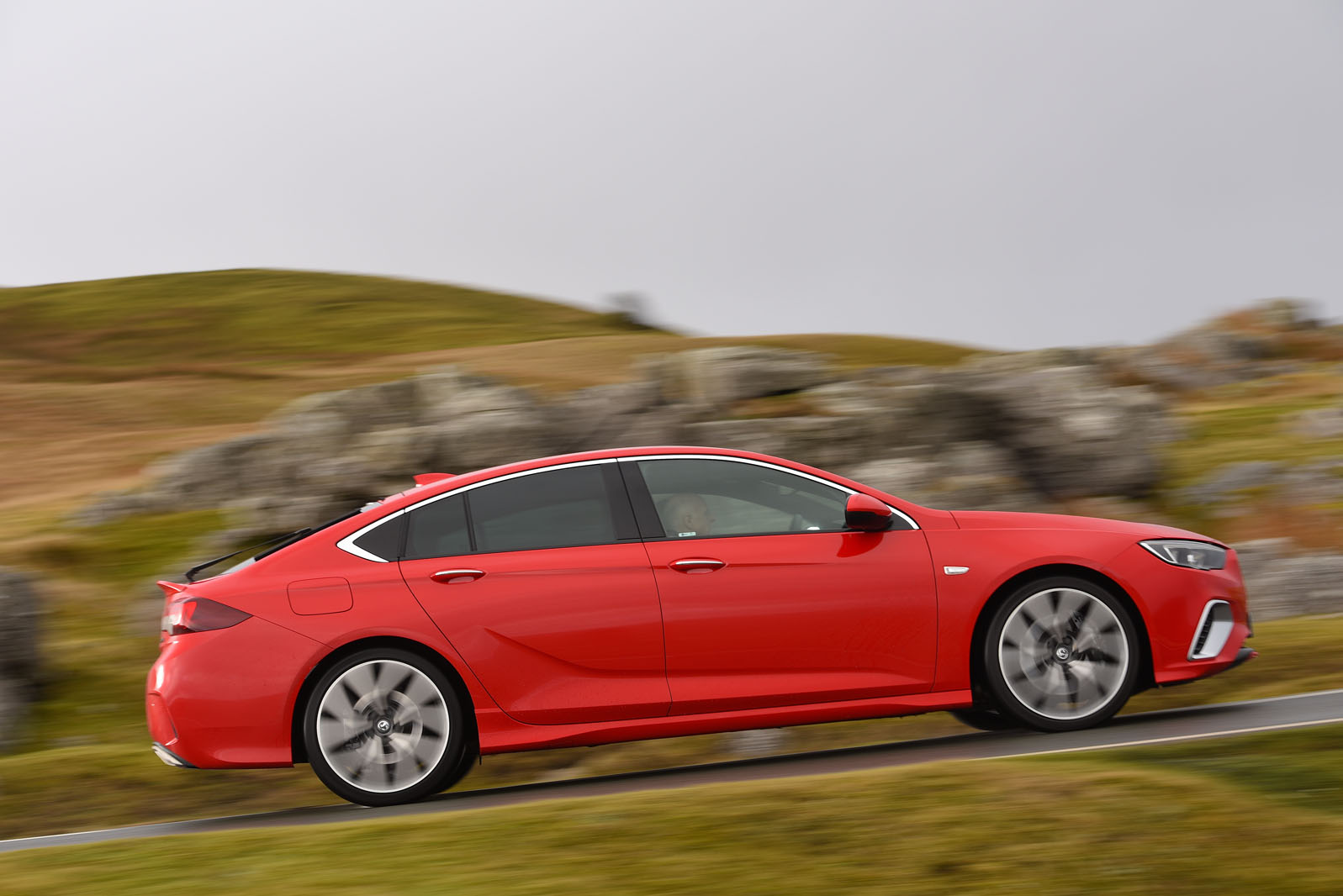 Vauxhall has labelled this “a first-class driver’s car in the most demanding conditions”. We are about to see.

As Vauxhall’s director of performance cars and motorsport, Strycek – famous since 1984 as Germany’s first DTM champion and an active racing driver mostly Opels since 1989 - is the architect of the changes that aim to convert an ordinary Insignia family saloon into a sporty, precise-handling, enthusiast-oriented car, while preserving the refinement that gives it the grand touring overtones that fit its generous size.

Right now, the pressure’s on to make ‘GSi’ stand for something important: Ford has been scoring larger than expected big hits with its sensibly sporting ST-line models; the GSi badge (first used on a Corsa in 1993) aims at similar appeal. VXR isn’t dead, but it’ll come out on special occasions only. It’s a sleek-looking car, the Insignia GSi.

Recent revisions to the whole Insignia line-up keep a clear connection with the previous model, but more extravagant sculpting of many body sections have moved it a few pegs up the premium ladder. The GSi is big at 4.8m overall and its long fastback roof makes it low and graceful, especially since it rides 10mm lower than standard. It’s neat, without being at all avant-garde. 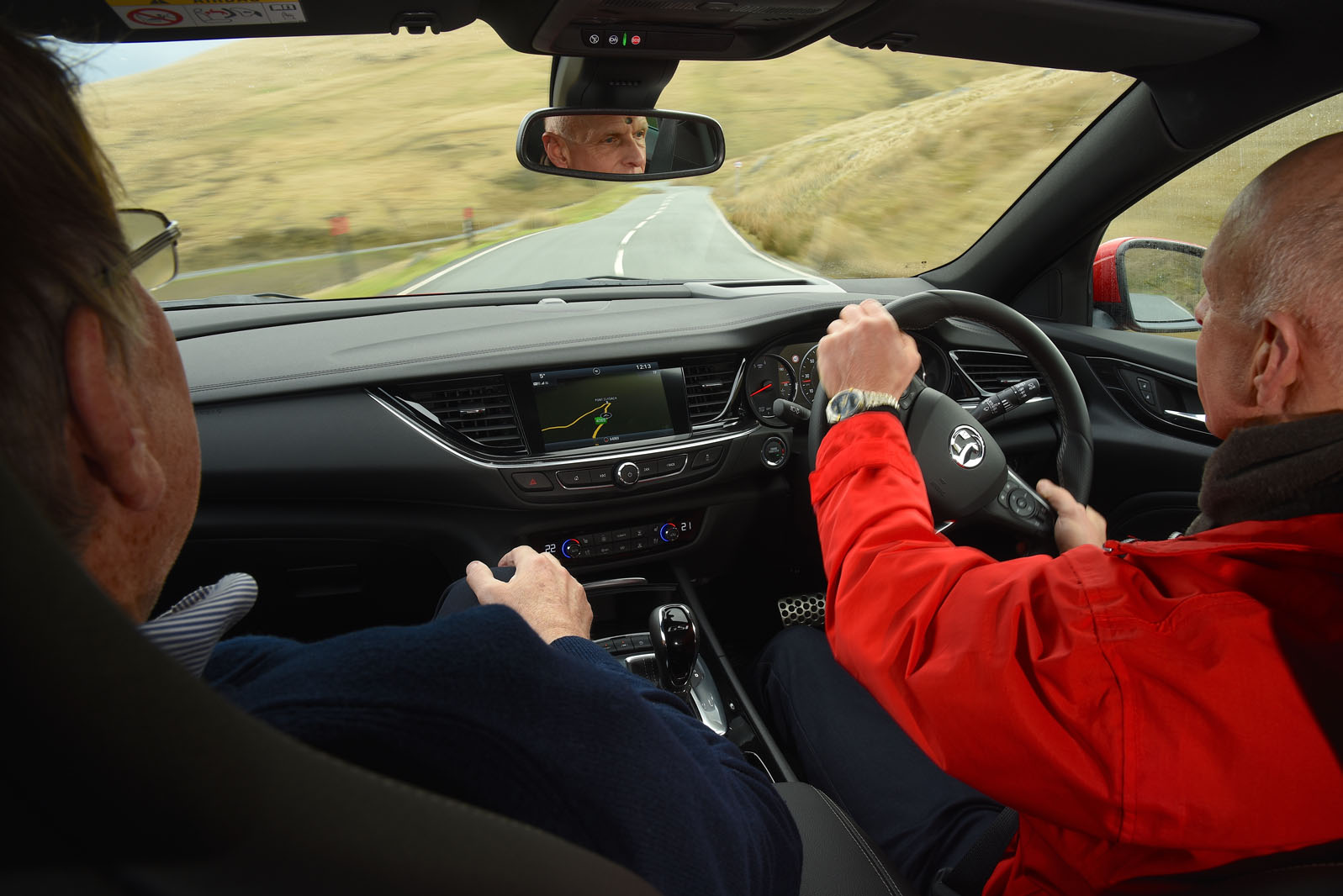 There are mild body changes: chrome lower front air intakes, discreet sill extensions plus a boot spoiler that really works, at least in Germany where the 2.0-litre 207bhp twin-turbo diesel version (our test car) can crack 145mph flat out, and the 256bhp 2.0-litre petrol turbo alternative can touch 155mph. The petrol model (0-60mph in 6.9sec) is marginally faster-accelerating than the diesel (7.3sec). In a straight line, both GSi models are slightly slower than their predecessors but can lap the Nürburgring 12sec faster – hard evidence that the latest GSi’s most important improvements are under the skin. “If a car works well at the ’Ring, it’ll work elsewhere in Europe,” says Strycek.

The fastest ever Nürburgring lap times

The GSi gets special Sachs electronically controlled adaptive dampers with GSi-only settings labelled Standard, Tour (softer) or Sport (stiffer). It has special GSi spring rates – around 40% stiffer than standard – plus anti-roll bars that dial out most of the understeer built into the standard car. The electric power steering has been modified to give a more precise response to inputs, even a nano- degree away from the straight-ahead.

“If you turn slightly and the car doesn’t do exactly what you want, then forget it,” declares Strycek. “This is one place where there’s no room for compromise.” 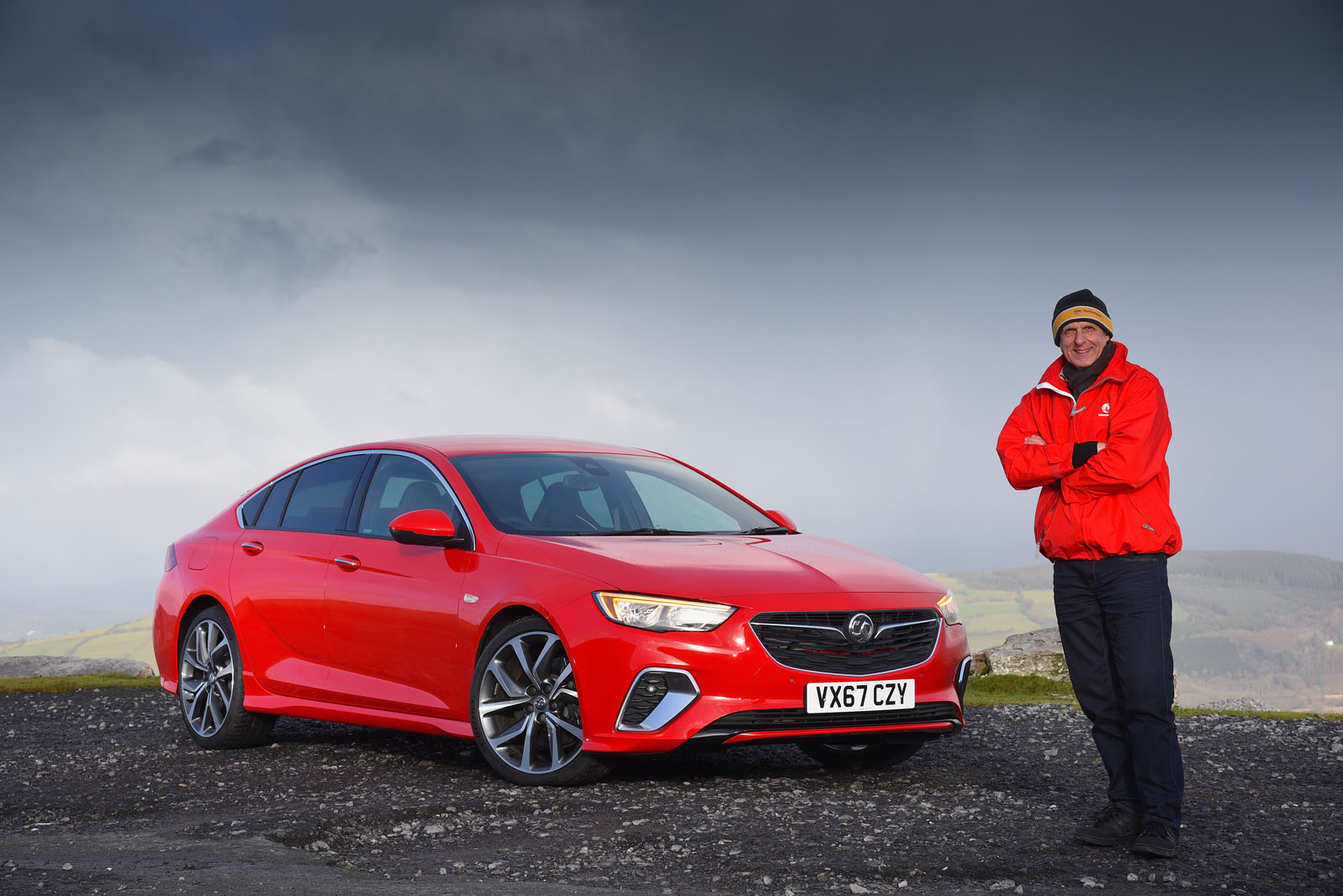 The standard four-wheel-drive system incorporates a GSi-spec twin- clutch rear-drive module that allows torque to be directed wherever the car’s sensor network calculates it’s most needed, but especially to the outside rear wheel when the car is cornering hard, to help it maintain its line. The standard wheels are 20in alloys wearing Michelin Pilot Sport 4-Ss, deemed the ideal choice by Strycek and his henchmen, and huge Brembo discs, unique to the GSi, peep through the wheels’ shapely spokes.

I’m first to drive. Instantly obvious are the greater steering precision and firmer ride rates. We start in Standard but soon progress to Sport because it’s still reasonably supple and adds handy body control. There’s also a quality of effortless, built-in stability that comes from sitting low in a car with wide tracks and a long wheelbase. You feel the chassis’ better body-roll control, too, delivered free of the annoying roll-rock (German engineers call it ‘nicken’) that affects the composure of many firmly suspended cars.

The accuracy at high grip levels is important. This isn’t a small car, and these roads are narrow, but we’re able to split our legal lane almost with geometric accuracy. 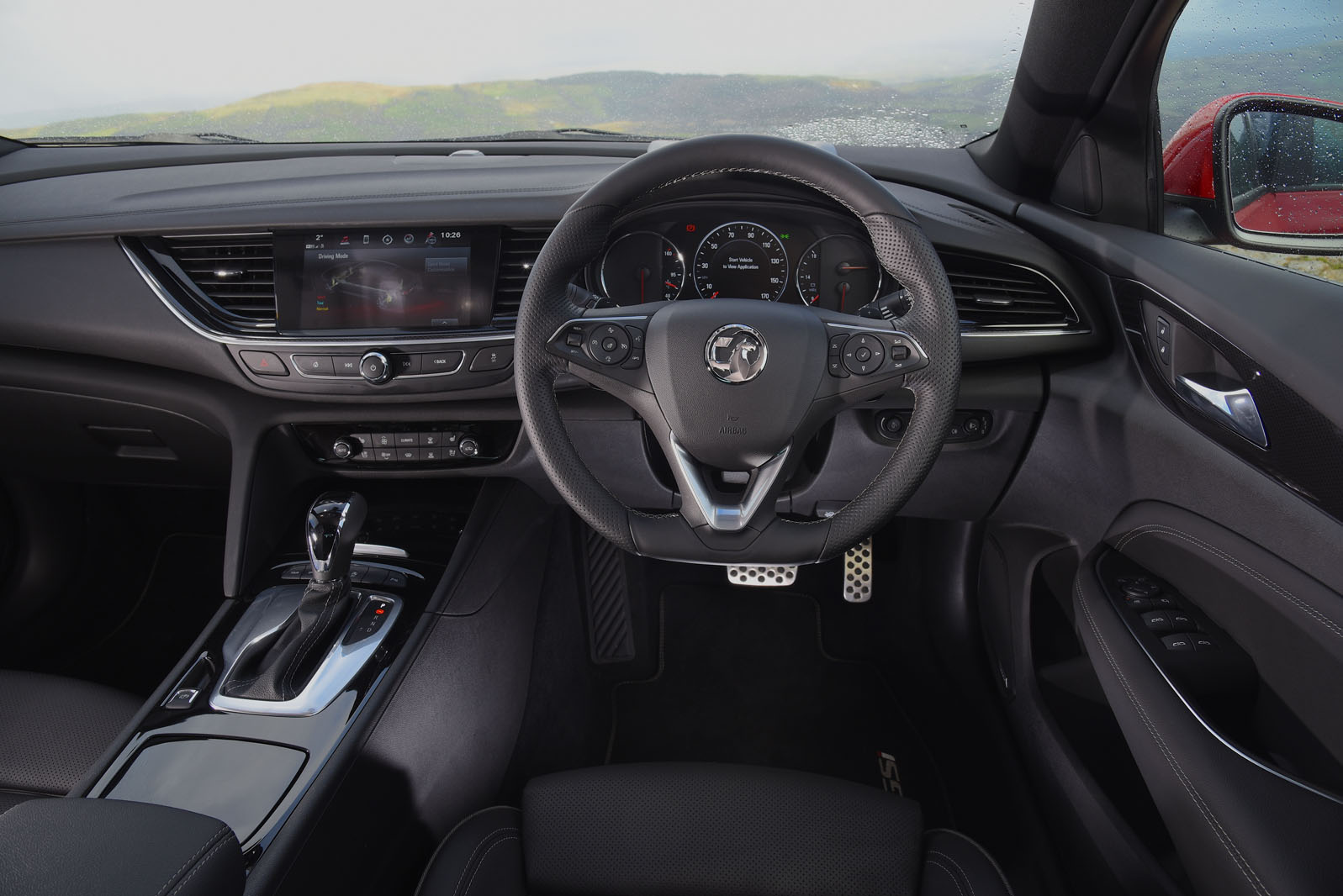 Strycek drives, much better and much faster, making more of the car’s and tyres’ surprisingly neutral grip near the limit and demonstrating both his prowess as a wheelman and his extreme familiarity with (what I now know is) a fine, stable, well-balanced chassis. We each drive again. Miles disappear under our wheels and the car just laps it up.

This Welsh exercise has been billed as a development drive. In theory, we’re driving these roads just ahead of the GSi’s official launch on the pretext that we might find something worth tweaking for the UK. But we’ve found nothing to change. Instead, we’ve found a terrific driver’s car, created by the subtle development and integration of a lot of sophisticated, electronically controlled hardware. As Strycek speeds to the airport and I roll homewards, I reach a simple verdict: the Vauxhall Insignia GSi is bound for a long and happy life, just as it is.

For the foreseeable future, GSi replaces VXR as Vauxhall’s performance label, bringing with it a notion of sensible performance rather than the hardcore character of many VXR creations.

Why? Because rivals like Ford have been doing so well with semi-sporting ‘ST-line’ cars and Vauxhall needs a slice of that action. There’s already a Corsa GSi on the way, and recent prototype sightings make it clear that an Astra GSi is at an advanced stage of development. The likelihood is that GSi versions of SUVs are in prospect too. Despite all that, Vauxhall insiders insist that while no new VXR models are planned, the badge will be used in future when suitable models are on the stocks. The company continues to value the performance image it has built behind VXR and is reluctant to lose it.

20 inch wheels on a car for

20 inch wheels on a car for the UK with roads made of potholes. Don't get the point, on any car.

The pinnacle of mediocrity..

The pinnacle of mediocrity..

Need a puff piece for your mediocre product? Send for Cropley.

This article should be labelled as an advertorial.

i can see it's a tricky proposition: if they go full house VXR they're likely up against M-cars and the usual premium suspects - and that will take a very determined buyer to go the Vauxhall route. Otherwise, they're selling something that's no quicker than a 320d but is dressed to kill. Maybe the market just isn't there for the lukewarm saloon/hatch in this segment.