BACK TO ALL OPINION BLOGS
Currently reading: The Skoda FUNstar is what a car designed by apprentices should be
UP NEXT
Opinion: Nascar's lions ready to Roar before the 24

It’s bold, striking and comes with extra bass. The Fabia-based pickup won’t make it to production, but that’s not the point of the project
Share
Close
Share story

“Don't be afraid to make your dreams come true."

Those were the words of advice from Skoda chief designer Josef Kaban ringing in the heads of 23 apprentices at the Skoda Academy in September 2014.

Seven months later, the collective dream of those students has been realised with the Skoda FUNstar - a funky Fabia-based pick-up concept that is heading to the GTI Meeting in Austria this month - and the manufacturer should be applauded for entrusting their students with the design and construction of it.

It's a bold and ambitious concept that won’t be to everyone’s taste, but it was clear from talking to the students who designed it that they were aiming for something that stood-out and divided opinion.

Given free reign to design a concept car, they wanted their model to be unlike anything else in the Skoda line-up while still keeping true to the brand’s identity, and they've achieved it. The FUNstar is a clear nod to Skoda's Felicia Fun pick-up cult-classic from the late 1990s, but it's been given a modern revamp to get with the times.

It's a shame the FUNstar won't be going into production but, really, this project isn't about creating a car that's ready to take the market by storm; it's about helping develop the students by giving them an arena to showcase their talents.

It’s staggering to think that those involved in its design and construction are aged just 17-18 years old, and youth shines through in the finished product. With a striking design, huge sound system and yobbish growl from the exhaust, there’s no question that the FUNstar is the brainchild of talented teenagers. Indeed, the designers’ first thought was to throw the Octavia’s 177bhp 1.8-litre engine into the FUNstar, but unfortunately for them it was just too big to be a viable option.

The place where these students are learning the ropes is the Skoda Academy in Mlada Boleslov, Czech Republic. It offers vocational training to people as young as 15 and helps them get an apprenticeship diploma or NVQ level 3. All who complete the course are offered a job at the end of it, with 75% of all students going straight into roles with the manufacturer once qualified, and 24% going on to study at university. That leaves just 1% of the 880 students enrolled on the 13 courses at the academy who leave the company altogether.

The FUNstar won't be coming to a showroom near you, but the invaluable experience these apprentices have gained from the project means that many of them may well go on to play a part in some of Skoda's best sellers in the years to come. 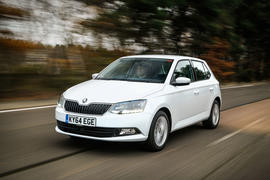 I hope they make it,what a funky looking thing it is!