BACK TO ALL OPINION BLOGS
Currently reading: Peugeot's 208 GTi 30th Anniversary special honours a legend
UP NEXT
Matt Prior: Sometimes being a car journalist is a pain in the back

Peugeot's hot new 208 GTi 30th Anniversary special acts as a homage to the triumphant original, but does it live up to expectations?
Share
Close
Share story

Did you see the recent TV ad for the 208 GTi 30th anniversary edition? The one where the little car outguns an aeroplane, conquers frozen lakes and snowy mountains and throws itself around and even over the top of a pursuing helicopter before arriving at its destination with the driver unruffled and ready for other types of conquest?

It’s based on the original promo for the 205 GTi, an example of which features in it, being overtaken by this new special edition 208.

It’s undeniable of course that this 208 would overtake the 205. Yes it’s a only a little shopping car with a tiny steering wheel and a curious colour scheme, but in this version it’s got 205bhp to play with (205? Ha!). We might get misty-eyed about the 205 GTi, but it wouldn’t see which way the newer car went. That, I’m afraid to say, is progress.

Or is it? You see although this tarted-up special is undoubtedly quicker, on the road it’s a twitchy little devil. Yes it might be quick in a straight line, but only if you can keep it in one - use its power liberally and, despite a Torsen diff, it has a heck of a job to put it all down.

On top of that it has a super-stiff ride that on a bumpy British B-road is so bad it felt like it was about to break my spine. Drive it on a motorway in a crosswind and it begins to feel decidedly unstable, too. Then add in an awkward clutch and an unexpectedly long-throw gearchange, and it doesn’t take long to conclude that, although this 208 can be made to go fast, driving it in such a manner is not really very nice at all.

The standard 208 GTi might not leap all over the road with quite the voracity of this special one, but it’s not without its faults either. What makes this more of a pity is it doesn’t seem so long ago that Peugeot’s chassis engineers were at the top of their game, producing such great road cars as the 309 GTi, the 106 GTi, the 306 GTi-6 and, especially, the 405 Mi16 4x4.

Years ago I had a 1.9 205 GTi. In many ways it was awesome: it had enormous grip, looked great and handled well, even when provoked. It was much more pleasant to drive than this 208 and, through dint of being able to drive it comfortably up to (and even beyond) its limits, it was probably faster point to point too. No fewer than 21 years on, I still remember it giving me one of the best drives of my life, driving solo late one wet night on a deserted A264.

However, countered against that, its build quality was iffy and its unassisted steering was slow and heavy, with too much self-aligning torque. Later on I tried a version with power-assisted steering and a quicker rack, and it convinced me that that was the one to have.

Equipped thus, the 205 deserves its iconic status. I doubt whether any version of the 208 GTi will ever become an icon, or if in 30 years we’ll even remember it at all, despite the swish advert. 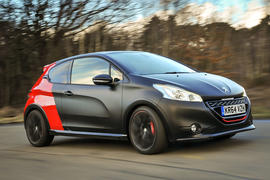 I drive my gti6 equipped 205 along the A264 every day on my way to work and yes, given a traffic-free run, it is a fantastic drive.

I disagree about the steering though, I love the unassisted set up, especially with a de-powered Citroen VTS rack, giving just over 2 turns lock-lock.

Disregarding the build quality and lack of safety features, with a few choice mods, a good 205 gti can live with most modern hot hatches and can be especially effective on track days.

It looks as if it was the victim of a strike at the Peugeot paint shop.