BACK TO ALL OPINION BLOGS
Currently reading: M3 Touring always was BMW’s inexplicably missing model
UP NEXT
Matt Prior: How soon is too soon to call it a day in motor racing?

Capability aside, M’s first proper take on the 3-Series estate will have an aura about it
Share
Close
Share story

“How about an extra-large and highly variable luggage compartment in a high-performance sports car? What is presently still a rhetorical question will soon become a concrete offer.”

Ignore the slightly tortured English – the first line of BMW’s press release reads like poetry to me. The PR bods are, in their inimitable way, alluding to the much yearned for and almost mythologised arrival of the first M3 Touring ever to see production. In short, it's happening.

This is excellent news, and while I’m sure someone will correct me in the comments, personally I find it impossible to not get very excited indeed about an M3 Touring.

Brits have a long-standing love of estate cars, and really quick ones especially, because the marriage of super-saloon fireworks and XL coachwork covers so many bases. These unusual cars are fast and they’re special. But equally, they’re low-key, useful and in many ways exist as the respectable face of hooligan engineering. Especially when debadged.

Of course, we also love the M3, as evidenced by the fact that you can hardly drive 10 minutes in this country without seeing one. Hit the classifieds and you’ll also probably find some home-made ‘M3 Tourings’, where the running gear, front bodywork, wheels and skirts from the saloon have found their way on to some 330i Touring, sometimes to stunning effect. Someone has even carried out this procedure with the recent M3 CS and the result is what, in Autocar road-test parlance, you'd call 'compelling'.

There is clearly an appetite for this car, which makes it so curious that BMW has waited decades to give the Audi RS4 and Mercedes-AMG C63 some proper competition. I’m not sure why that is, but do know that the company has always regarded sales of Alpina’s superb B3 and D3 Touring models as ‘keeping customers in the family’. Hmm. Because of Alpina's tiny production numbers, this line sounded unconvincing when I first heard it and, given today's announcement, seems even more far-fetched. An M3 Touring is the car BMW should have started building many years ago, and it seems to me they've only just realised it.

What has really stuck in the craw of enthusiasts is that, while denying us thoroughbred performance estates, M has seen fit to extensively build out its range of SUVs. Given that, in purely technical terms, it is not – by BMW’s own admission – particularly difficult or expensive to make Touring versions of M saloons and run them down the usual production lines, the whole arrangement is odd.

Or at least it would be, were the market not obsessed with SUVs.

So what will this new M3 Touring, which is still some two years away, look like on paper? Although BMW will offer the next M3 without front driveshafts and with three pedals, I wouldn’t be surprised to see the Touring appear with xDrive four-wheel drive and BMW’s dual-clutch automatic gearbox as the only driveline option. This would be in keeping with the go-anywhere, do-anything vibe estate cars are famous for, and I’m not sure how many prospective Touring owners would want manual gearshifts. You may disagree.

I’d also expect the springing to feel (though not necessarily be) fractionally softer than for the saloon, and steering commensurately retuned to be less responsive and keep direction changes feeling fluid and intuitive. The selectable modes for the damping will however need to be recalibrated on account of the increased weight of the car – both unladen and when stacked with clobber for the whole family. But overall, despite losing some agility, I’ve no doubt it’ll feel an almost identical twin to the saloon on the road. Maybe just the faintest touch more cuddly, 500bhp straight-six motor notwithstanding. It'll be some package, that's for sure. 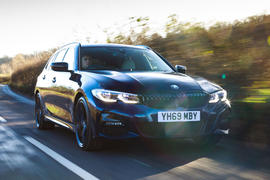 Can a six-pot diesel engine and bigger boot make the 3 Series even more appealing?

There is one other thing. What thing makes M-car wagons more alluring than most is that they’re astonishingly rare, and not only in relation to the 3-Series. The only cars of this ilk ever to leave Garching are the LHD-only E34 and V10-engined E61 M5 Touring models – legends both – though M did create an M3 Touring concept for the E46 generation (pictured). Because of this scarcity, the first ever production-spec M3 Touring will feel special, whether or not it gets glowing reviews. It’s just that sort of car, and expectation will be massive.

Finally, the arrival of an M3 Touring might just prompt Alfa into building an elongated version of the Ferrari-blooded Giulia QV, and what a machine that would be. Either way, the wagon wars are about to get hotter.

I will still take an Alpina

I will still take an Alpina thanks - better suited for the road and won't have the hideous massive grille.

12 August 2020
Probably the most useless model in their range.

Richard's likely right about X-Drive and DCT only.

Maybe BMW moving to 4WD to many would have ended up in ditch in the past.  For that reason I too feel it'll be Quattro, sorry Xdrive.