BACK TO ALL OPINION BLOGS
Currently reading: History suggests the new BMW M3 will be outstanding
UP NEXT
Opinion: Why the Festival of the Unexceptional is an annual highlight

History suggests the new BMW M3 will be outstanding

Munich's super saloon hasn't always hit the sweetspot, but this one could be superb from the outset
Open gallery
Close

I wonder whether BMW the M3 will now finally break out of the E46’s shadow.

The M3 of the millennium had heavenly handling and was endowed with an absolute humdinger of an atmospheric straight six, but the V8-engined E92 that followed was heavy and soft by comparison.

The F80 then tried to remedy that but ended up being too tetchy in its dynamics. Exploiting it was hard and less enjoyable than it should have been, especially in the wet, and the then-new S55 twin-turbo straight six – with its gorgeous carbon brace – felt and sounded more stoic than stirring.

But we can take heart from the fact the F80 M3 (and its M4 sibling) evolved considerably during their lives. Suspension geometry and spring-and-damper rates underwent several changes, and by the time the final Competition models arrived, the M3 was likely the world’s finest super-saloon. (Apart, perhaps, from the Alfa Romeo Giulia QF).

I can recall driving the M3 CS – the ultimate, carbonfibre-bedecked monster of the F80 clique – on the roads around the Nürburgring and being blown away by its agility, poise and surprisingly good steering (not normally a BMW strong suit). 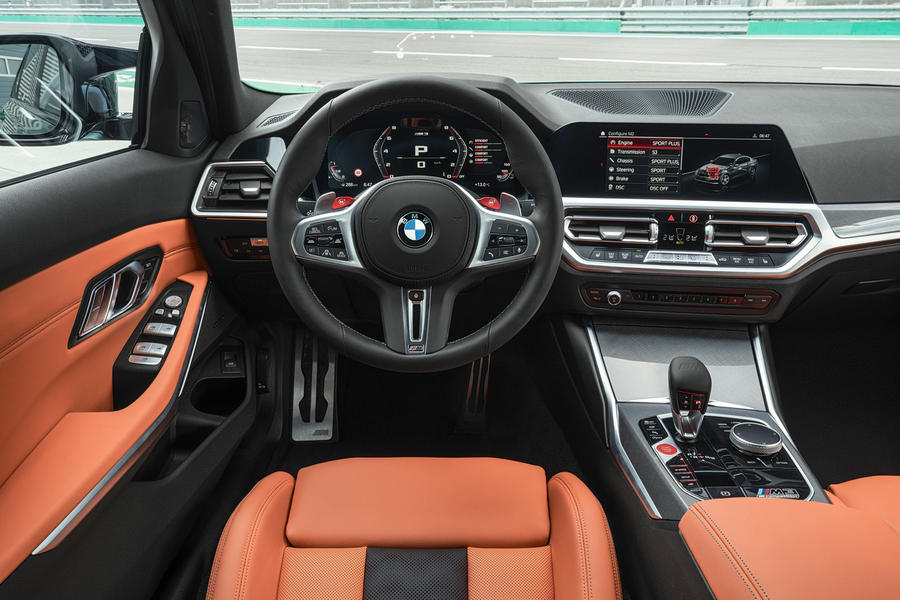 The result was that this 454bhp, 1585kg car gave its driver enough confidence to drive right up to and then beyond the limit of grip, even on Michelin’s very adhesive Cup 2 tyres. I loved it.

If BMW has used the F80 Competition and CS models as its starting point for the set-up, expect the new cars to be very well honed from the off. That BMW is still prepared to offer rear-wheel drive and three pedals (although not, for some godforsaken reason, in the UK) also shows that it still has purists just about in its sights.

My one reservation is weight. The cars have grown quite a bit broader, taller, longer and heavier. Extra torque will disguise that on the straights and wider rubber will help contain it in corners, but performance cars can never truly hide flab. And in terms of pure handling, what we really don’t want or need from the new M3 is an BMW M5-lite.

Erm, about the weight gain

The manufacturers no longer have to care about weight gain since they can just "turn up ze blower" these days to take care of the additional weight. So the design dept can come up with all manner of gadgets with no 0-62 time penalty. It was essential to save weight in the na days were power (with decent torque) wasn't so easy to come by. Agility will be worse of course but how many buyers worry about that, it cannot easily be measured, and no one cars about that sort of thing anymore anyway.

Agreed that tuning the turbo motors is easily done to produce better 'numbers' but (1) enthusiasts should care less for numbers and more for dynamics such as agility, response & feel, and (2) the weight gain also affects brakes and tyre wear too - a Taycan Turbo S will chew up a set of tyres in half the laps of a GT3 doing similar times.

CarWow review said it's 160kg heavier than outgoing model - sounds like the M2 just got a promotion to the being the last true M-car in the range!

Looks are fine, but not weight gain

I like the looks, so that's no issue for me, but I agree with the concern reqarding the fairly substantial weight gain.

Yes, the AWD grear and additional engine bracing would inevitably add weight, but even allowing for that 160kg seems like a lot of weight gain. We'll see if this weight gain has affected the car's agility and sharpness when the car is fully tested.

That's the equivalent a 25 stone person.