BACK TO ALL OPINION BLOGS
Currently reading: Elemental RP1: the cutting-edge sports car that’s made on a farm
UP NEXT
Opinion: The Monza Rally is Rossi's to win if he can find a team

Elemental RP1: the cutting-edge sports car that’s made on a farm

Of all the places you'd expect a new sports car company to spring up, a farm yard near a sleepy Hampshire village isn't one of them
Share
Open gallery
Close
Share story

Ever had that sinking feeling when you’re sure you’ve taken a wrong turn and you have little clue how to get back on track again? I did when I was trying to find the new headquarters of Elemental Cars.

A few weeks ago the nascent British sports car company moved into new premises near Hambledon in Hampshire. An invitation to pop down and see the first full production version of the firm’s first car, the RP1, was appealing considering I live all of 30 miles away from the new base.

If only it was that simple. It turns out Elemental has set up shop in the back of beyond; a closed road in Hambledon village threw my satnav out of kilter, and necessitated a diversion. As I threaded down an ever-narrowing country lane and came to a ‘dead end’ road sign, I became convinced I’d gone very, very wrong.

We've driven the new Elemental RP1 - and it is fantastic

Incredibly, I was on the right road. As I found out by ignoring the dead end sign and driving on, Elemental has decided to build its high-tech new open-top sports car on a farm. If all this sounds as if I don’t approve of Elemental’s new location, nothing could be further from the truth: I think it is fantastic, and I’m sure that many prospective owners will love the ‘secret society’ feel, especially because the local roads are fantastic for keen drivers.

When the build shop is complete and production has begun in earnest, Elemental will invite owners to come down and watch the finishing touches being made to their bespoke cars. It’s part of a master plan to immerse car owners in the company.

Still, my first question to the team as myself and photographer Stan Papior wandered into the new factory – which bears that ‘we’re still unpacking’ look – was: “Why here, rather than a nondescript industrial unit in Motorsport Valley?”.

There is logic behind it, says design manager Guy Colborne: “It’s easy for everyone in the company to get to and we’ve got a lot of very good high-tech suppliers in this area.

“There are a lot of companies associated with McLaren up in Guildford and Farnborough, a lot of people doing boat work in Portsmouth and Southampton, and a massive amount of really good companies that do very high-tech machining and component work”.

Elemental has weaved a local web of the niche suppliers it needs to support the build of the RP1, and its computerised approach to the car’s design means creating components is “just a basic question of sending the data. If a supplier is a 30-40-minute car drive away, that’s perfect. Everyone’s really excited to work with us. We feel like we’re part of an industrial community”. 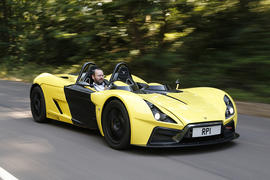 The composite work is done in conjunction with a Portuguese company called Optimal Structural Solutions, but the RP1 is predominantly British made. Significantly, Colborne senses that our nation’s ability in small-volume component manufacturing has enjoyed a resurgence in recent years.

“It’s something this country is really good at,” he says. “When we were doing the very first prototypes, we were getting work done in China.

“But a really interesting thing happened in the last four or five years: the costs in China have gone up, and the costs in the UK have gone down. So it is now actually cheaper to use all of the UK suppliers. They have modernised so that they can do everything that the Chinese suppliers can do, and you don’t have constraints such as the language barrier and you’re not shipping components from halfway around the world.

“Anyone who says we don’t do any manufacturing in the UK anymore is wrong. What’s more, we can take our data and get parts turned around very quickly.

“It isn’t just the high-tech work - it is even things like getting really good welders. We used a local welder for some of our sub-frame work. We’ve got a collective knowledge and local skill base – it’s nice to be able to work in that way.”

Exclusive photoshoot of the Elemental RP1

The farmer gives us a wave as he trundles down the lane in his tractor. Elemental, it seems to me, is part science lab and part cottage industry.

“It’s a very British way of working,” adds Colborne. “If we can’t get what we want, we go away and muck around in the garage - only in this case it is a very high-tech garage. We send parts out for 3D printing and rapid prototyping, and get components custom machined just to test things out”.

Elemental had to seek permission from the South Downs National Park Authority to build its premises in such a rural location. With the Clandfield Observatory over on the next hill, the company had to take care to keep light pollution from its windows to a minimum.

That's topical, because the staff have been burning the midnight oil in order to finish their first production specification RP1 in time for the Goodwood Festival of Speed. Which is also pretty much on the doorstep, only 21 miles from Elemental’s base.

6 June 2016
cars that you need to wear a crash hat in. Sorry, I love my bikes and I'm happy - no, insistent - to get on the bone dome. But a car? Nah
I was in Lizard, Cornwall yesterday. Left about 1430 to drive to London. Roof down in the Boxster through the Cornish lanes, then the dual carriageway then M5. M4. Into London on a Sunday evening. A nightmare - we live near Canary Wharf, double nightmare as we have to go right through London to get heme. Result nearly 7 hours and 400 miles door to door.
And you know what? It was bloody lovely. Roof down pretty much all the way - Boxster OK up to 90 mph. 35 mpg! Every time we got the chance to overtake it's foot to the floor, down four gears, up to 7,000+ and that howl from the sports exhaust!
When we were in the queues we listened to the radio. So that could be some blues programme - we're both old rockers - or a discussion programme on the week's news or the surprisingly interesting obituaries of the week.
With the Boxster's two boots we had loads of room for our gear - it had been a working weekend and we had computers, cameras, smart clothes, casual clothes, work out clothes. We also bought some wine fro Cornwall and that fitted in too.
Now I'm sure that the Elemental would be marginally more capable on a track - here I'm not talking about lap time but enjoyment - but can you imagine how crap the journey would have been from Cornwall. With your wife? Wearing bloody helmets?
I really don't get the whole track day car stuff. My Boxster S - now 2 years old - cost nearly £20k less than the Elemental. For that money I could buy an historic Formula Ford and a trailer. And go racing ffs!

I don't get it either!

8 June 2016
I saw a couple in an Ariel Atom on the A38 at the weekend, both of them wearing crash helmets in the 25 degree heat. Not once did I think ''that looks like fun". On a track fair enough but they just look ridiculous on the road.